A Bum Steer for Scooby originally aired on November 20, 1976 and was the 11 episode of season 1 of the Scooby-Doo Show.

Here we see the gang visiting Daphne’s Uncle Matt at the Lazy S cattle ranch in Texas where the gang encounter a ghostly Medicine Man and Tamuka the flying Ghost Bull.

I have no trivia for this one, but this was the first Scooby-Doo episode I ever reviewed. I have removed that original review as it wasn’t all that good. I didn’t have a proper microphone at the time, nor did I have good video editing software.  I knew my skills would improve over time, so I started with an episode I always enjoyed, but didn’t love with the intent to return to it and redo it in the future.

Well enough of my jibber jabber, let’s get on with the review.

The episode begins with the gang driving through the desert at night. The kids are on their way to visit Daphne’s Uncle Matt at his ranch.

Freddy soon slams on the brakes, as in the sky they see a flying ghost bull. The bull takes chase after the Mystery Machine and they are able to evade it by driving through a mountain tunnel. 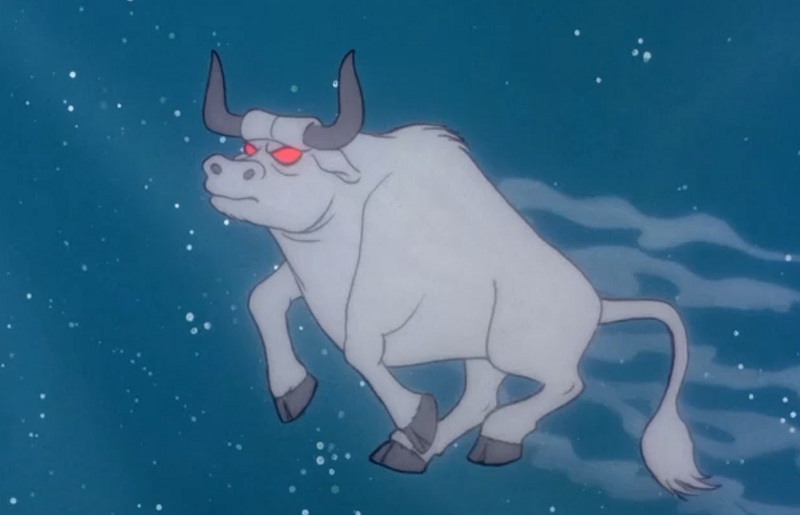 At the Lazy S Ranch, Uncle Matt tells Daphne that the bull is a local legend. However, his neighbor Sam Farren explains that 20 cows have disappeared from his ranch, with many of the workers stating that Tamuka – the flying bull – took them. 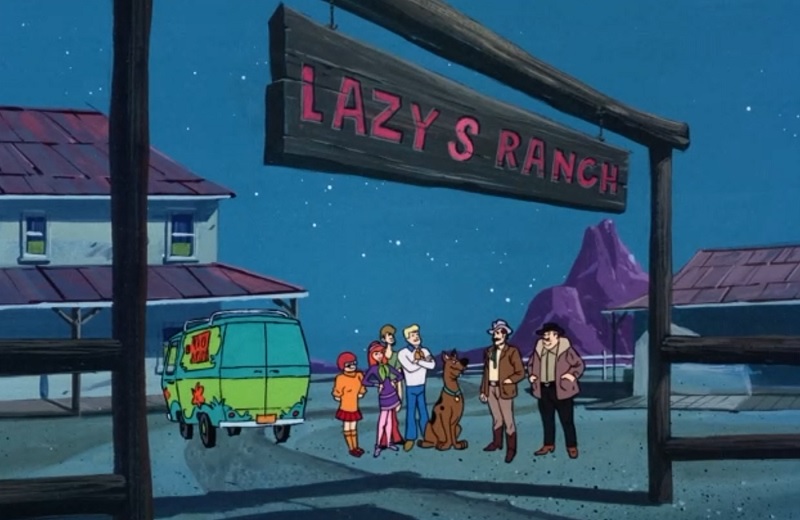 Sam explains that a thousand years ago cliff dwellers in Hidden Valley had a burial ground that was guarded by Tamuka.

Lenny then appears, and we are introduced to the ranch’s cook. We also meet the Ranch Foreman Carl, who tells Mr. Blake his cows are missing. Uncle Matt heads off to let the sheriff know with Scooby and Shaggy, while Carl, Lenny and Sam head off to find the missing cattle. Freddy, Daphne and Velma decide to investigate the pasture where the cattle disappeared.

While driving to see the sheriff, Uncle Matt mysteriously disappears as his jeep drives through a mountain tunnel. Shaggy and Scooby then have a small adventure heading back to the ranch to tell the others.

At the pasture, the barbed wire fence has been cut with wire cutters. Freddy doesn’t spot any hoof prints or tire tracks making it even more mysterious. Before they can investigate further, Tamuka shows up and the trio race off in the Mystery Machine.

Back at the ranch, everyone eventually reunite and Shaggy explains how Uncle Matt just vanished from the Jeep. Hoping in the Mystery Machine they entire gang head off to where they first saw the Flying Bull.

At this spot they find cattle tracks which they follow to Hidden Valley and its cliff caves and burial ground. Up in the cliffs they are watched by a Medicine man. 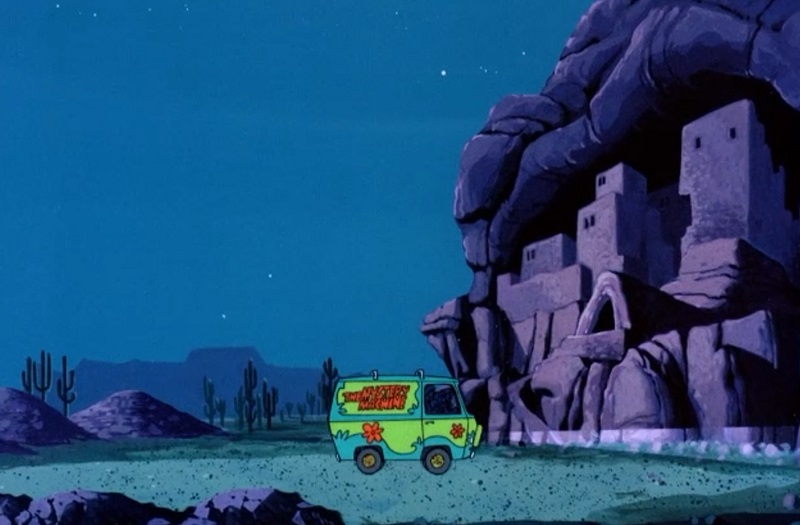 On the ground the hoof prints turn into tire tracks which takes them to a herd of cows with a double OO branded on them. Velma assumes they are the cows taken from Sam’s ranch.

A man on horseback shows up and tells the gang they are trespassing on Sam’s ranch. The gang scoot away and head back to the burial ground.

Freddy and the girls head into a burial mound while Shaggy and Scooby stand guard outside. It doesn’t take long for the ghostly medicine man to frighten them, where they run into the burial mound. 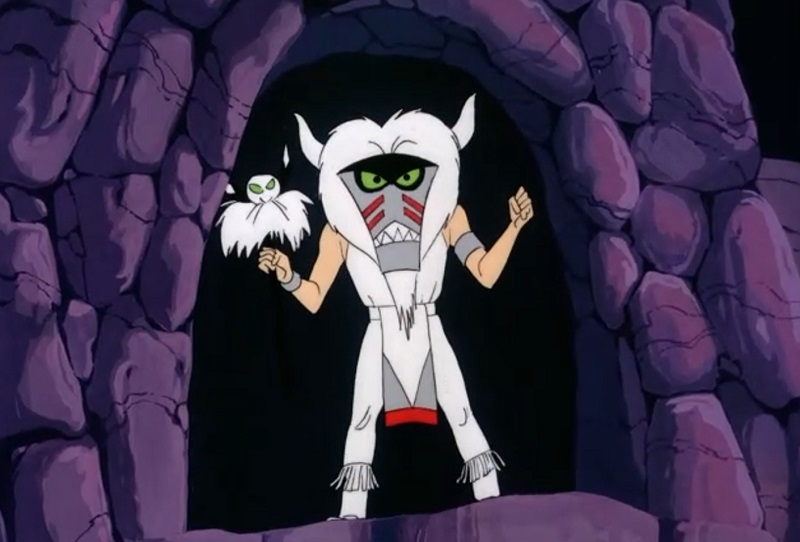 Inside the burial mound the gang spot an ancient skull and skeleton. Meanwhile, Freddy finds Tamuka inside the cave so they take cover in the cliff dwellings. 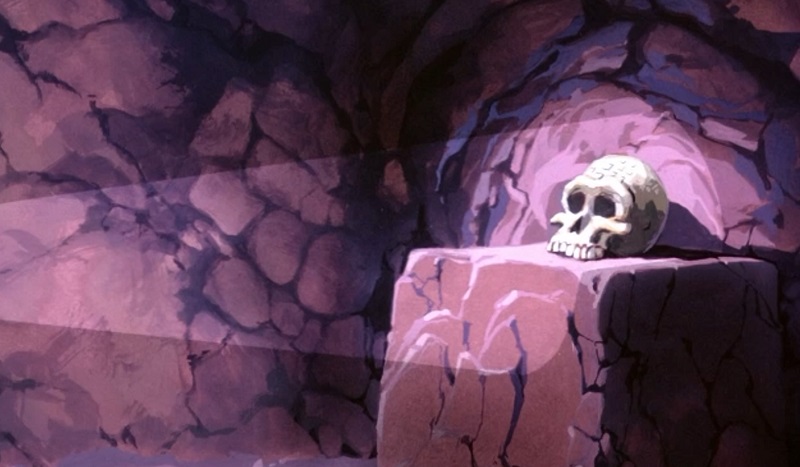 Separated in the confusion, Scooby and Shaggy come across the Medicine Man, and we get a fun little chase. Freddy and the girls also have an encounter with the ghost who locks them in a room. Fortunately, there’s always a secret passage nearby to escape from.

From the clifftops, Freddy, Daphne and Velma see a herd of cattle run past, however, no cowboys seem to be controlling the herd despite them hearing voices. They soon figure out that someone is dressed up as a cow as they eavesdrop on a conversation between the Medicine man and the talking cow.

Exploring the caves, Scooby and Shaggy find a cow costume, so they dress up. Meanwhile Freddy and the girls find a flying Tamuka machine that is basically a small helicopter dolled up to look like a giant bull. The gang tie the helicopter to the wall preventing the Medicine Man from flying off. 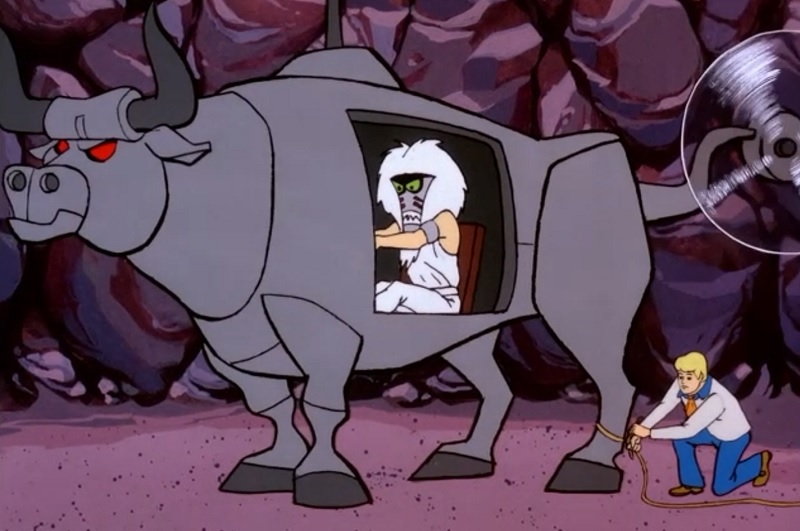 Freddy and Velma then figure out the castle Rustlers were dressing as cows to control the cattle herd while also scaring off anyone curious with the ghostly Tamuka. Freddy then creates a plan to use Scooby and Shaggy as a Trojan cow where they use the cow costume to get themselves rustled. 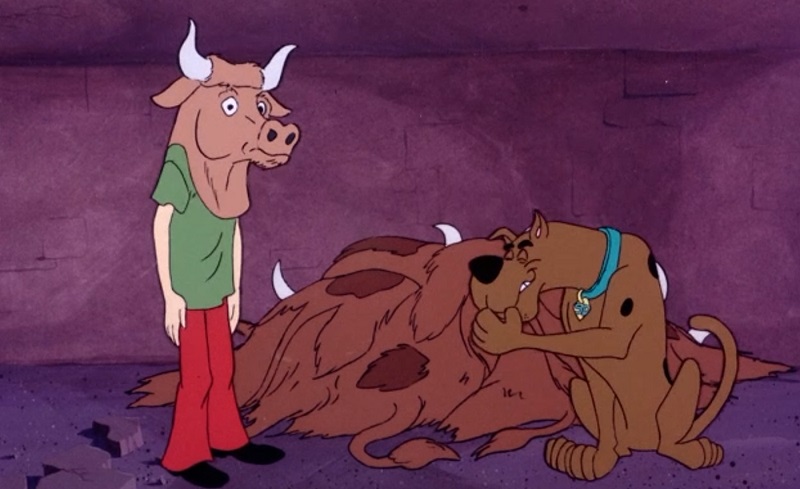 Following the truck that swiped Scooby and Shaggy, they gang encounter an operation where the S on Uncle Matt’s brand is being covered up with a double O brand. The Cattle Rustlers lasso Freddy and the girls, but the trio are saved when Uncle Matt and the sheriff show up.

Uncle Matt explains that someone had yanked him out of the Jeep where he was held prisoner until he managed to escape.

We learn the troublesome rancher who lassoed Freddy and the girls is Sam’s Foreman. Unmasking the Medicine man we discover it to be Lennie the cook. Finally, the cattle in disguise is unmasked and it turns out to be Sam Farren.

Uncle Matt drives the cattle home, and with another mystery solved, the gang head off on to their next adventure.

There’s a lot to love about this episode. For one, the inside of the burial mound is spooky as heck with the skull and other remains.

Tamuka, while I don’t exactly find it scary, was cool in that it turned out to be a helicopter. I was so happy it wasn’t another projection.

The Medicine Man looks cool as well, and I think they make him unique enough so that he doesn’t repeat the look of the Medicine Man we saw in Decoy for a dognapper. But it’s also hard to ignore the idea that this material has been covered before. (This is probably the third time we’ve seen rustlers, with the other times occurring in The Spooky Fog and Who’s Afraid of the Big Bad Werewolf’.

Finally, the cliff dwellings made for an interesting location, and it was cool to see the gang run throughout the various caves.

Actually, I did have a bit of trivia in that this episode probably took Mongollon people, who lived in cliffs near El Paso. The image below shows a more specific area where we think this episode may have taken place (X marks the spot!)

The episode moves at a quick pace, however, my big complaint is that we didn’t spend all that much time with Uncle Matt. I would have appreciated an end scene where everyone sat down to a meal, or perhaps a longer intro. I just feel that extra bit of breathing room would have given us some insights to Daphne’s family.

So overall, I liked this one, but I also found it a bit lacking to award it a higher score. Still, it’s a fun little adventure that moves fast and keeps you entertained.

Anyway, until next week where I will be covering ‘There’s a Demon Shark in the Foggy Dark’, Stay Spooky.