There’s a Demon Shark in the Foggy Dark originally aired on November 25, 1976 and it is the 12th episode of the Scooby-Doo Show.

I don’t have too much in the way of trivia other than that we get to see Scooby and Shaggy waterskiing in this episode while being chased by a shark. And this, I assume, was the inspiration for the water skiing scene in the intro.

There’s a Demon Shark in the Foggy Dark – Episode Review

The episode begins with two gentlemen in an airplane flying above the ocean from India to North America. Each of the gentlemen are handcuffed to the same briefcase. Nearby, there is also a demonic looking shark that has frog-like arms and feet, encased in a block of ice. 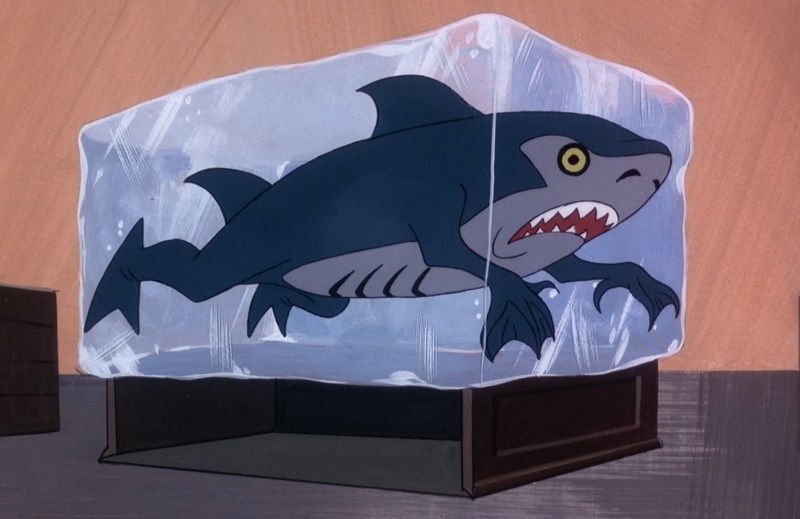 The ice begins to melt, and as the airplane lands, the men walk off to customs to hand over the briefcase. The inspector comments on how unlucky they were to share a plane with that weird humanoid demonic looking shark. We discover the shark was drug up in the Indian Ocean, where it had been buried for over a million years.

The shark needs to remain in customs for 24 hours to be guaranteed, where it will then head off to Aqua Land. 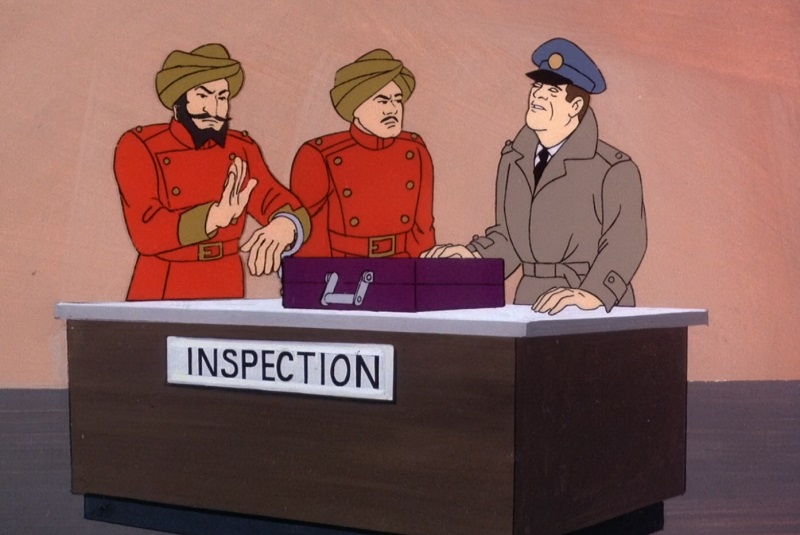 The two men hand over the briefcase and we see that it is full of valuable jewelry made out of pearls that is valued at 2 million dollars. These Jewels are to be picked up by the museum the next day. 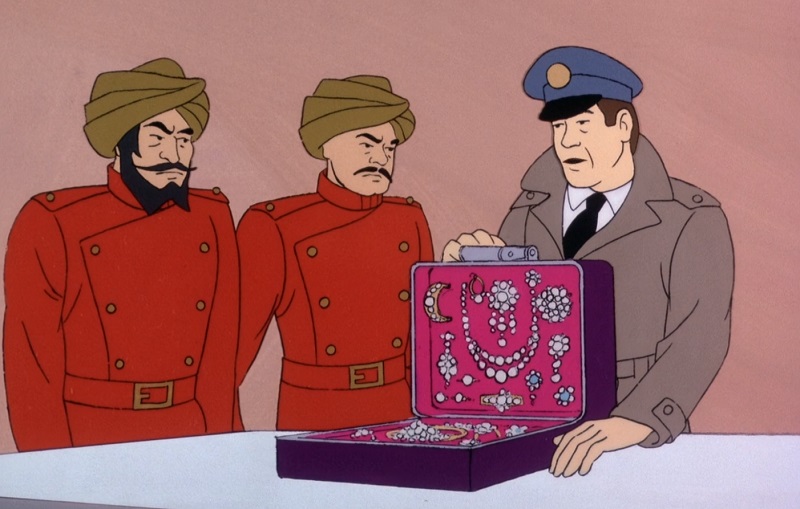 The Customs inspector locks up the jewels with the shark and he, along with the two men head their separate ways. The custom inspector claims there’s no need to worry as the building is just as secure as Fort Knox.

Unfortunately, he’s unaware of the Demon Shark inside thawing out, and we soon see the pearls vanish.

On the beach, the gang are enjoying a nice sunny afternoon of waterskiing and snacks. Velma’s Uncle has lent the gang a boat, and on the radio they hear about the jewelry theft.

The gang are chased by a real shark, and Freddy crashes the boat onto a nearby beach. Climbing a cliff, they are watched above by the demon shark.

The clifftop is incredibly foggy, and the gang are on the hunt for a telephone. Instead, they find they are inside Aqua Land where they discover the Demon Shark who takes chase. With the help of some performing dolphins, the gang eventually escape. 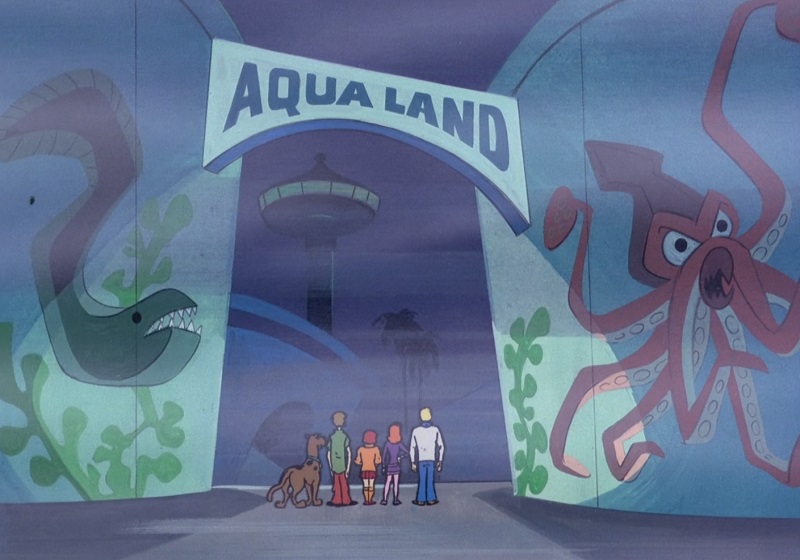 Searching for clues, they discover M Dreyfus, the manager of Aqua Land in his office. Mr. Dreyfus explains that he thinks that their biologist, Professor Beaker, brought it back to life. Mr. Wells, who is Mr. Dreyfus’s assistant had reported to Mr. Dreyfus that Professor Beaker has a book of Hindu spells that can revive the dead. 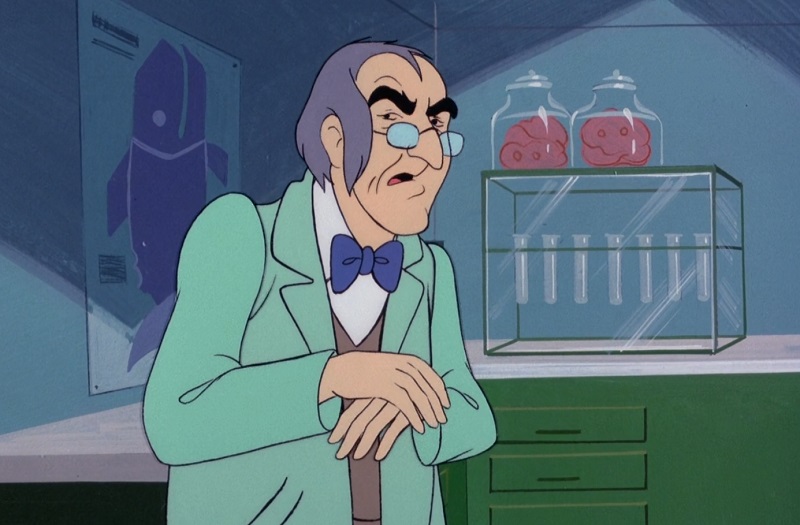 Velma confronts the Professor about the book of spells and he’s a little bit shady with his answer explaining that Mr. Wells had shown it to him and hadn’t seen it in months.

The gang then split up and head off to look for Mr. Wells and the Book of Spells. In a matter of seconds Scooby and Shaggy are chased by the demon shark where they hide in the nearby pie in the sky restaurant. In this restaurant loaded with pies, the two find a book of spells, but it’s only spells for cooking recipes. 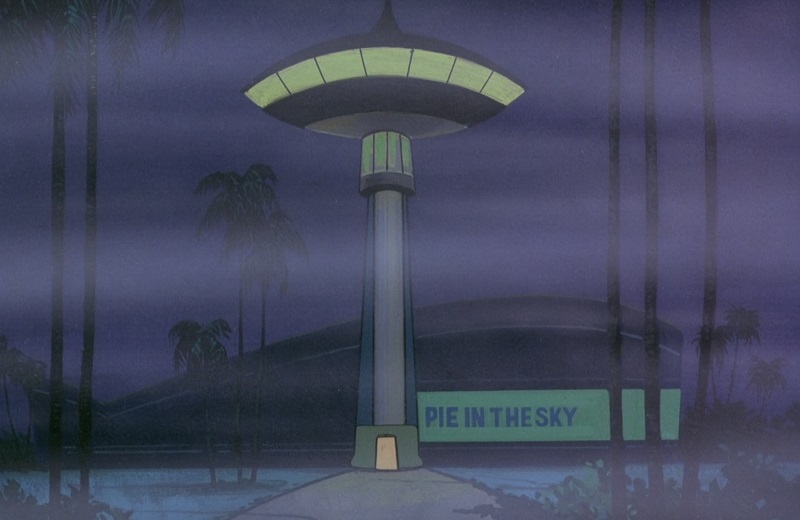 Meanwhile Freddy and the girls quickly bump into Mr. Wells in the fog.

In Mr. Well’s workshop, the gang asks the man about the Demon Shark and he explains that it was Professor Beaker who had the book of spells. Mr. Wells also claims he’s only seen the frozen Demon Shark. Mr. Wells also shows off a cabinet he’s working on that is full of secret drawers.

Heading off, Freddy and the girls find empty oyster crates bought from Sam’s Fish Market. Velma is suspicious that an aquarium would buy fresh oysters from a market.

Freddy and the girls then break into Mr. Dreyfus’s office as he leaves for the night. Inside, they search for the Spell Book, but instead find a brochure for the Exhibit of the Maharaja of Ringtur’s Rare Pearls at the County Museum.

Velma also finds a shipping notice to ship the Oysters from here to Florida. 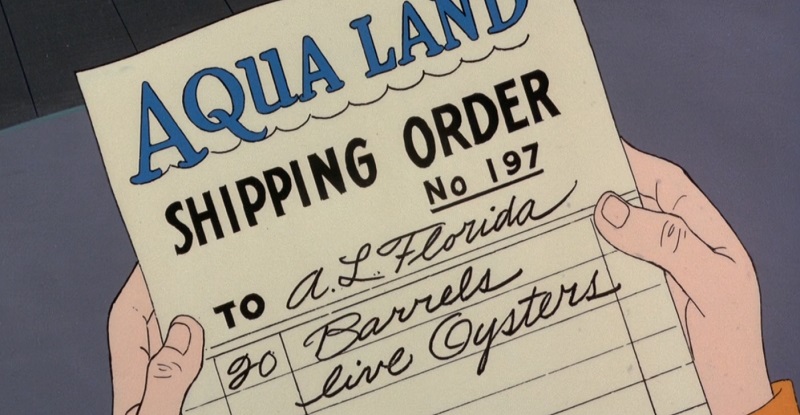 The gang then reunite, and Velma politely mocks Shaggy for finding a recipe book of spells. The Demon Shark then shows up, but quickly leaves after swiping a bag of oysters that Shaggy and Scooby discovered in their previous chase from the Demon Shark.

Freddy plans a trap, and while it doesn’t 100% go to plan, they trap the demon shark. They also discover that hidden inside the oysters are the missing pearls.

Freddy unmasks the shark and it turns out to be Mr. Wells. Freddy explains to Professor Beaker that Mr. Wells the assistant wanted to scare Mr. Dreyfus off the job. Wells had stolen the jewels by building the cabinet that the Demon Shark was transported on. With the cabinet he had built a secret drawer he could hide in before and after he stole the jewels. 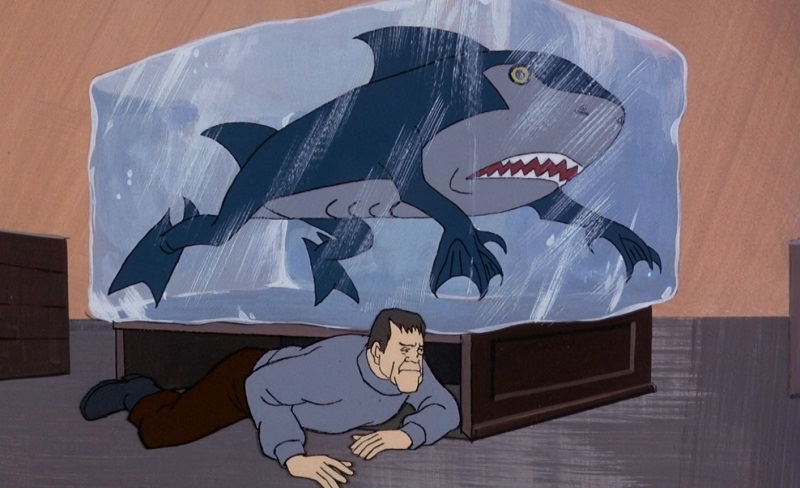 That man must have the bladder of a champion as he probably would have hidden in there for days. Anyway, Wells hid the jewels in some frozen oysters, then hid them with the live oysters to ship them to Aqua Land in Florida where he could pick up the oysters.

Unfortunately, Mr. Dreyfus wouldn’t authorize the shipment, so Wells had to scare him off using the Demon Shark costume, then get promoted to manager, where he could then have everything go according to plan.

There’s a lot to enjoy about this episode. The demonic shark looks kinda cool, we get the legendary scene of Scooby waterskiing and being pursued by a shark, and there’s a good little mystery. The atmosphere is also spooky as the gang wander about the empty Aqua Land.

However, while all the players are in place, this episode didn’t hit a homerun for me. I think it’s because a lot of the setting and plot seem familiar from Scooby’s Night with a Frozen Fright, where we saw the gang encounter a thawed out caveman at a marine park.

The constant fog also drove me batty. While it was added to add mood and spookiness, I felt it just muted the excitement of the episode. Scooby-Doo is unusually colourful, but in this case, everything was incredibly hazy.

The pacing seemed a little off as well where we mostly get Freddy and the girls interviewing people and in between we get snippets of Scooby and Shaggy running away from the Demonic Shark.

Finally, the demon shark, who looks scary, doesn’t act very intimidating. For the most part, he just spends a lot of time spying on the gang. I never felt they were under any real threat like they were with the Gator Ghoul or the Shark God from the Secret of Shark Island.

Still, this episode is a lot of fun, and I’ll gladly watch it again. It does go above and beyond to set up a fun mystery and it kept me guessing as to who the real Demon Shark was.

Until next week, when I will be covering the Ghosts of the Bad Humor Man (which is one of my most requested reviews), Stay Spooky!