When You Wish Upon A Star Creature originally aired on Dec 1st, 1979 and is the 11 episode from Scooby-Doo and Scrappy-Doo.

This episode sees the gang at an observatory dealing with a Star Creature who has come to earth and is frightening all the local scientists away.

This is the 100th episode of Scooby-Doo ever produced, and it’s the last to feature Pat Stevens as Velma, as Marla Frumkin takes over next episode.

Anyway, enough of my jibber jabber, lets get on with the review!

When You Wish Upon A Star Creature – Episode Review

The episode begins with the gang attending a laser light show at the observatory. Outside, George the security guard has a quick conversation with Professor Spalding about the star the professor discovered.

George goes about doing his rounds and has a look in the telescope. As he watches the sky, the Star Creature appears and scares George off. 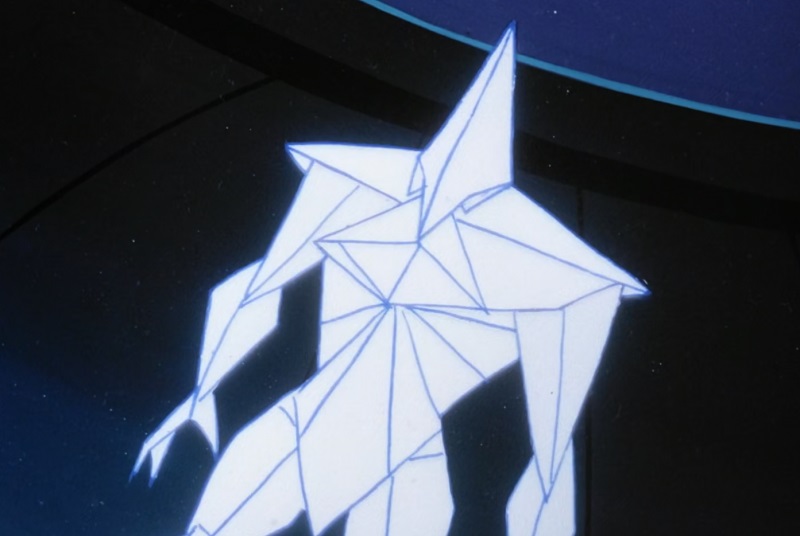 Meanwhile, the gang are on their way up to the Greenfield Observatory. Velma is excited to see the telescope as it’s the most powerful telescope ever built. On their drive up, they notice a lot of panicked people driving away from the observatory screaming about a Star Creature.

Freddy hits a rock, and the Mystery Machine gets a flat tire, but he makes it up the large hill to the observatory.

Getting out of the Mystery Machine, they meet Professor Spalding who explains the Star Creature came down through the telescope from a star he just discovered. Shaggy and Scooby wait back to fix the flat tire while Freddy, Daphne and Velma go into the observatory to investigate. 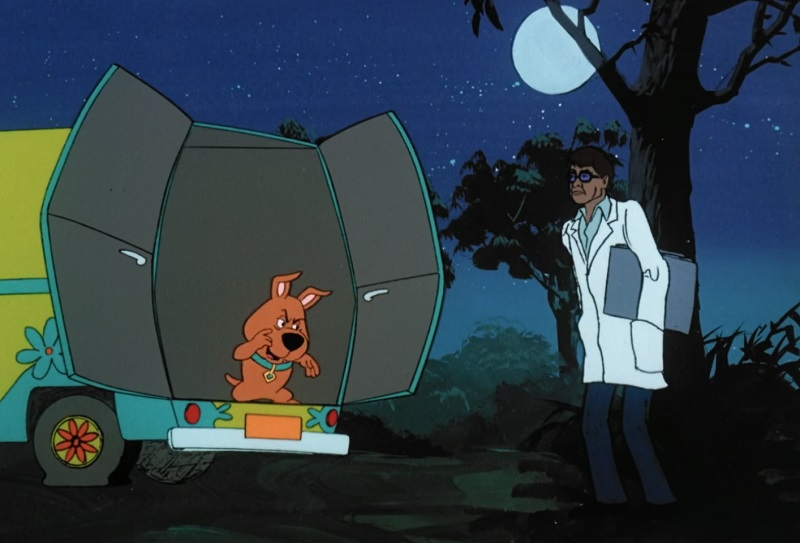 Looking at the telescope, Velma notices that it isn’t even pointing at the sky. Before she can investigate further, she is yelled at by Mr. Greenfield, the owner of the observatory. He then fixes the telescope so she can look at the newly discovered star. He then asks them to leave.

Working fast, Daphne spots a plaque on the Telescope saying that it is made by Star Laboratories.

Outside, Shaggy, Scooby and Scrappy run into the Star Creature and we get our usual fun little chase scene. Both parties meet back up and they head off to Star Laboratories. Before they head off, they meet Hank Grime crawling about in the bushes. He tells the gang to leave as soon as possible. 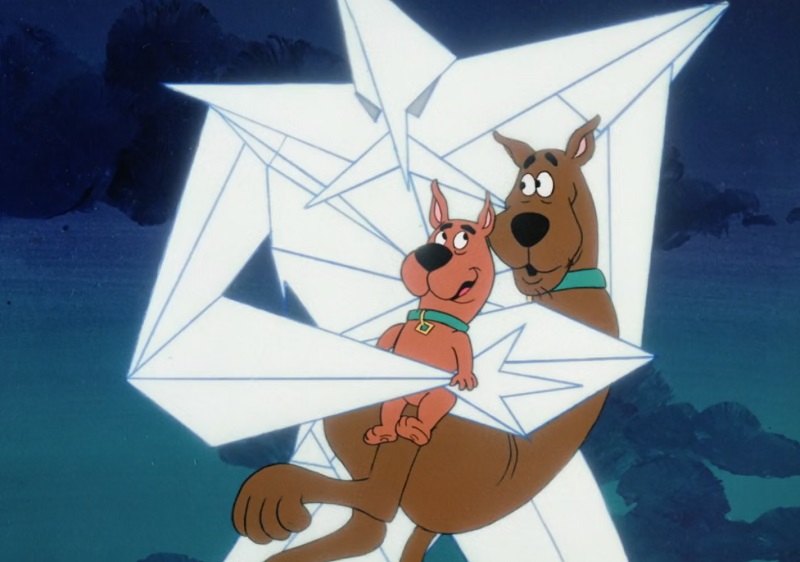 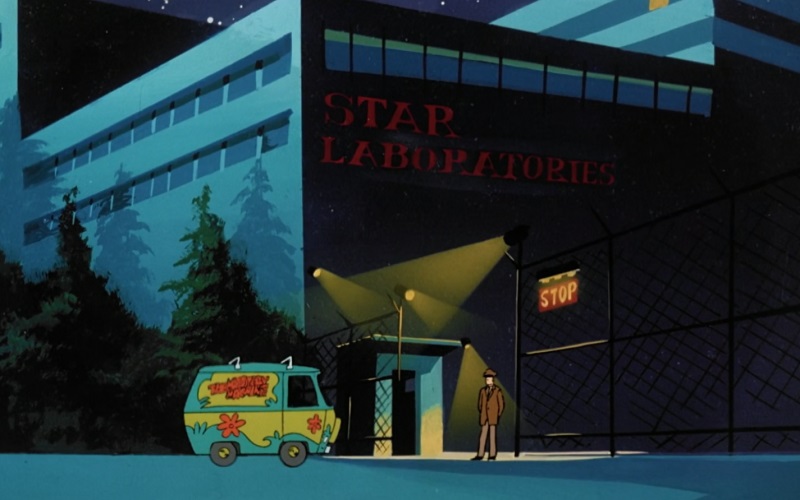 With the flat tire fixed, the gang try to enter Star Laboratories, but are stopped by a guard who explains they can’t enter as there have been a lot of thefts of top secrets. Scrappy runs in anyway and is followed by Shaggy and Scooby who all immediately run into the Star Creature. Running back outside, the entire gang watches the Star Creature bolt back up the hill to the Greenfield observatory. 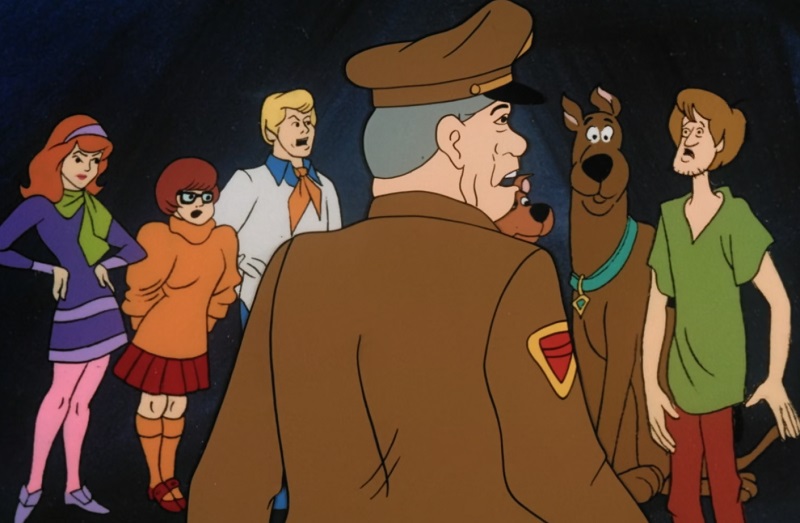 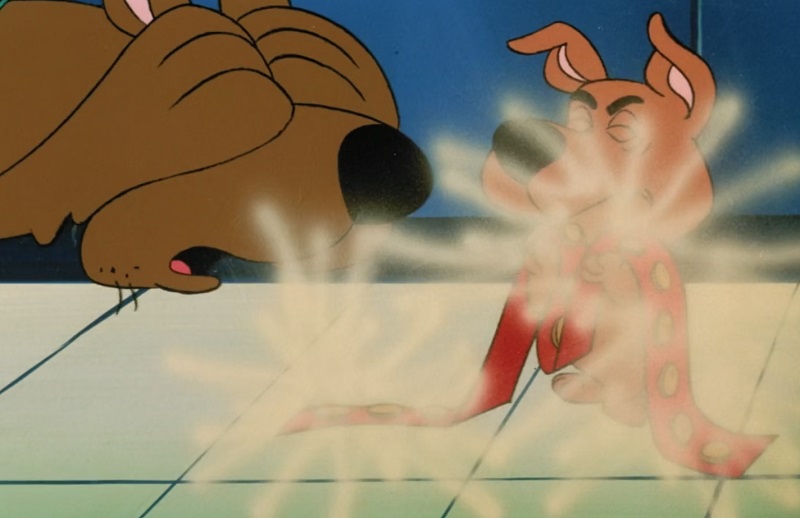 Mr. Greenfield shows up tells the gang they are all leaving early and then goes on his way.

We get our third chase scene with Scooby, Scrappy and Shaggy and the Star Creature which sends them back outside thanks to a jet pack. They land on the telescope, and then have a quick tussle with a mama bear and her cub.

The gang all gather up in the observatory room and the Professor runs in and is angry that his telescope settings have been changed once again. The Professor leaves and Velma tampers with the telescope once more. She points the telescope at Star Laboratories and can read the drawing board of an engineer working on a project. 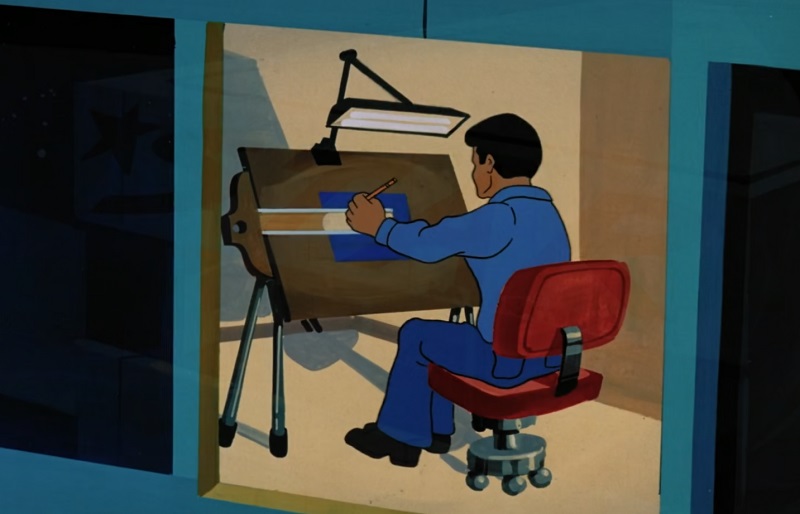 We get our final chase scene and the Star Creature is caught. Velma unmasks him, and it turns out to be Mr. Greenfield. He had been using the Telescope to steal secrets from Star Laboratories. When Professor Spalding discovered the new star, Mr. Greenfield no longer had enough time to steal secrets so he wanted to scare everyone away to get back down to business.

There is a lot to like about this episode, but I felt it had a lot of failed potential. Right off the bat, it tries to set up all of these suspects, but instead of developing these side characters, the episode resorts to silly chase scenes – meaning there’s not a lot of mystery here.

A lot of this episode seems recycled from other episodes, and there’s not a whole lot of plot here that we haven’t seen before. The only thing new is the location, which is an observatory, and that’s pretty cool. Who doesn’t love space.

The Star Creature himself, he’s trippy enough, and I’d say I’m a fan of the design. If they gave the Star Creature maybe a bit more of a backstory, or some weird technology to play around with – I think he would have been a lot more memorable. Instead, we get too many chase scenes, and too many characters introduced to be red herrings.

Daphne, Velma and Freddy have a bit more to do in this episode which is nice, and Scrappy isn’t all that disruptive, so no complaints there from me.

Join me next week when I will be covering the Ghoul, the Bat and the Ugly

The Ghoul, The Bad and the Uglyl