Rocky Mountain Yiiiii! Originally aired on December 15, 1979 and is episode 13 of Scooby-Doo and Scrappy-Doo

This episode sees the gang on a skiing vacation at the Pratt Ski Lodge. The relaxation time shortly comes to a halt when they encounter the ghost of Jerimiah Pratt.

Not much trivia for this one other than we see the gang in their winter clothes, which are similar to the ones they wore in That’s Snow Ghost. Anyway, enough of my jibber jabber, let’s get on with the review. 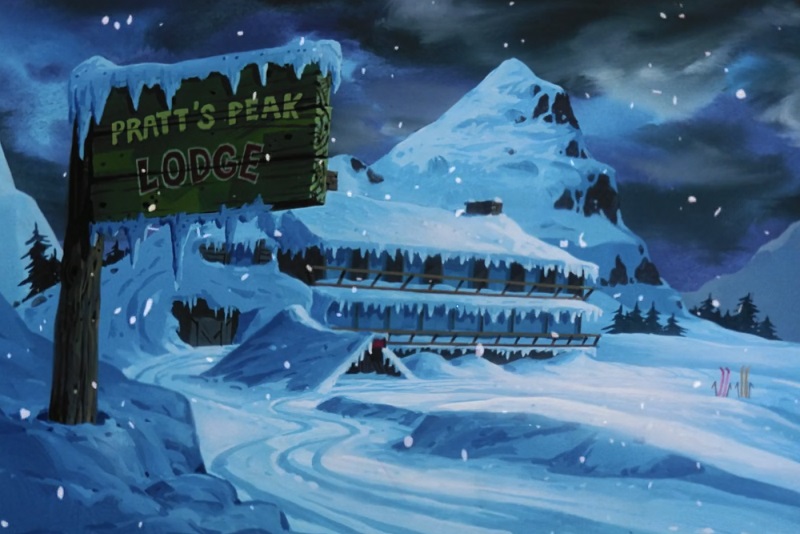 The episode begins at Pratt’s Peak ski lodge and we see two skiers hitting the slopes. Their leisurely skiing is soon interrupted by the ghost of Jerimiah Pratt who yells out ‘Trespassers Beware – This is my Mountain. 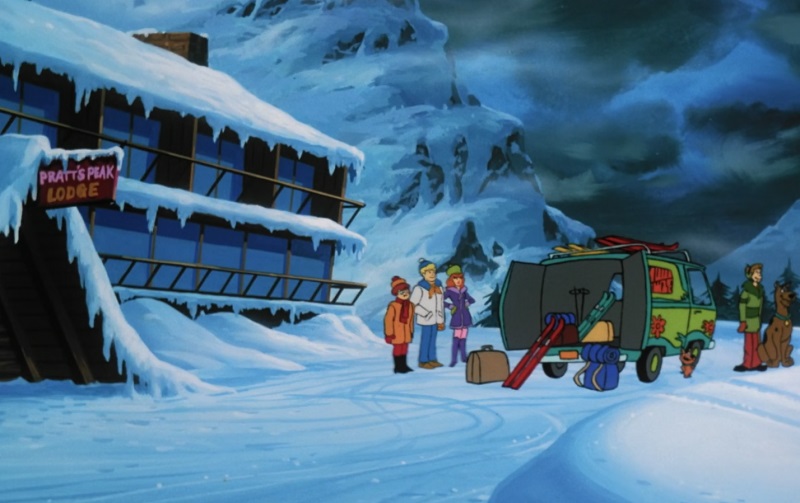 We then meet up with the gang checking into Pratt’s lodge. Velma notices immediately that the place is deserted – which is odd as it’s prime ski time season.

As Scooby is about to enter the lodge, a woman comes out and warns them of grave danger. The woman is a housekeeper named Mrs. Winter, and Noah Reid comes out and apologises for her behaviour. Noah is the owner of Pratt Peak’s lodge.

Noah explains that the Ghost of Jerimiah Pratt has been haunting the slopes. Noah explains Jerimiah died in 1865 after leaving his cabin one winter day to take his covered wagon down the mountain where he was unfortunately killed by an Avalanche. 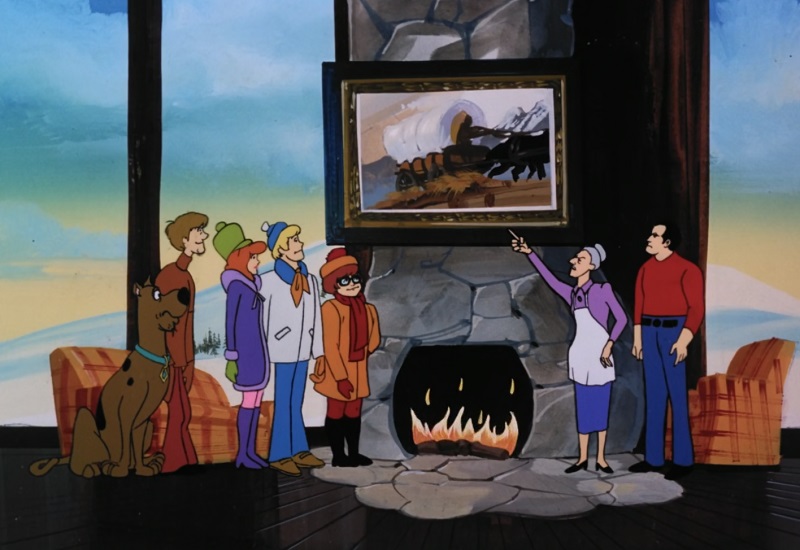 Will Henry, the ski lodge instructor comes out and tells everyone the ghost is hogwash, before leaving to hit the slopes.

Settling into their rooms Shaggy and the dogs are the first to run into the Ghost of Jerimiah. Running back to the rest of the gang, the ghost of Jerimiah Pratt knocks a bunch of snow off of a roof to bury the gang. 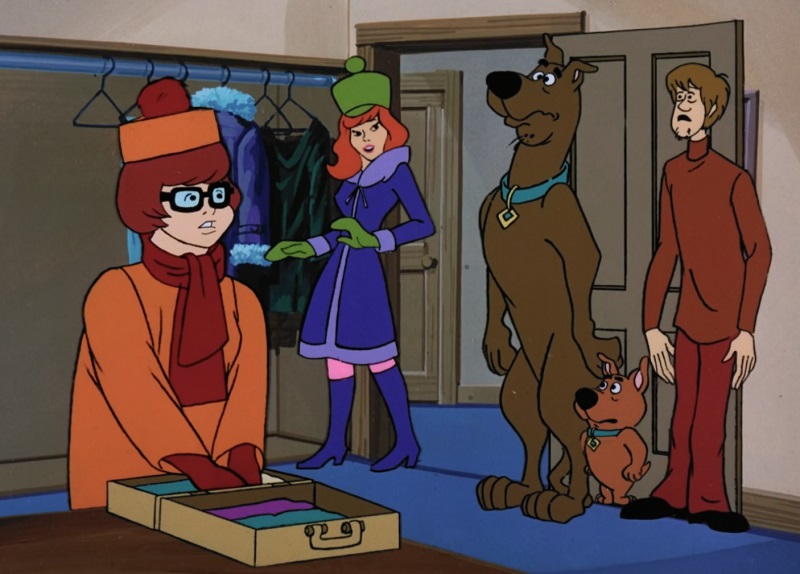 Velma figures that they should go investigate Pratt’s old cabin, so Freddy, Daphne and Velma head up the mountain to check it out.

Scooby, Shaggy and Scrappy hit the slopes instead. As expected, Scooby and Shaggy have no fun skiing, and are soon terrorized by the Ghost of Jerimiah Pratt.

Back at the Pratt Cabin, Daphne uncovers a secret floorboard where they find Jerimiah’s Diary from the floor. Velma discovers the last page has been ripped out, however, there’s the indentation marks of the entry which she can salvage. The old entry reads December 18, 1869 where he was hired to transport a Government Shipment of Eagles over the pass. 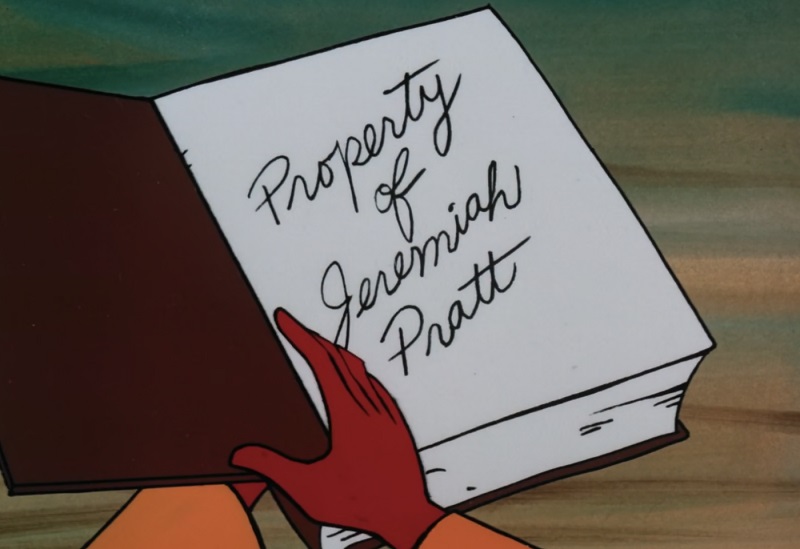 Shaggy, Scooby and Scrappy then emerge from a trap door in the cabin floor and meet up with the rest of the gang. Daphne, Velma and Freddy waste no time and run down the secret passage as they figure the ghost might be down there. 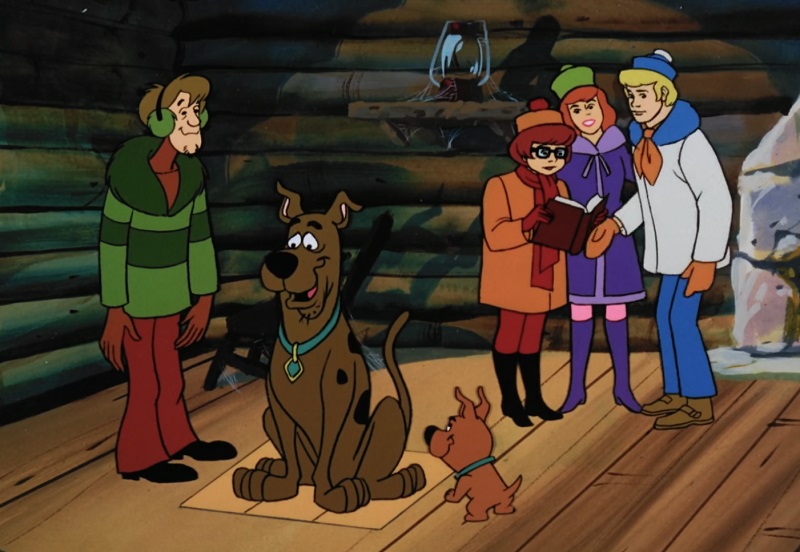 Instead, obviously, the ghost charges into the cabin and terrorizes Shaggy and Scooby. They eventually escape him, and try to relax in the lodge sauna to warm up, however, the ghost shows up once more. 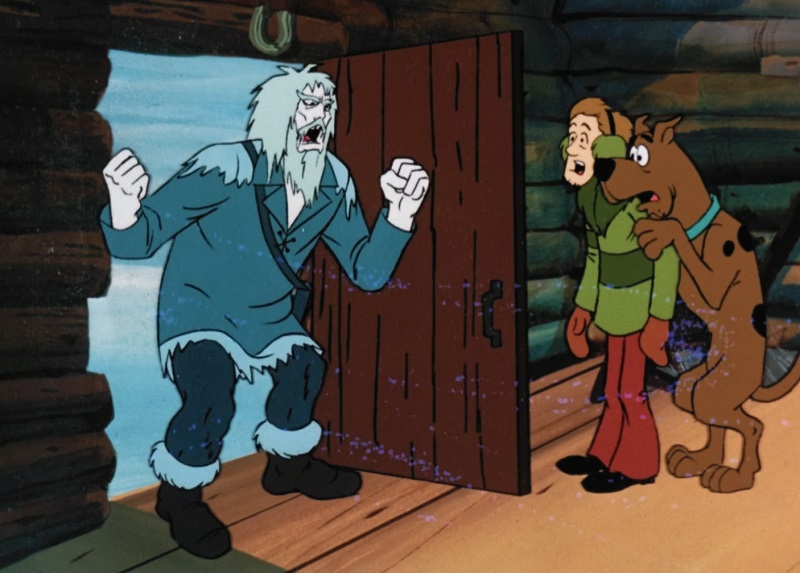 Meanwhile, down in the tunnel, Daphne discovers a secret room full of boxes of explosives and digging tools.

Everyone is back at the lodge and Velma notices William Henry’s skis are labelled WHP and she becomes incredibly suspicious. 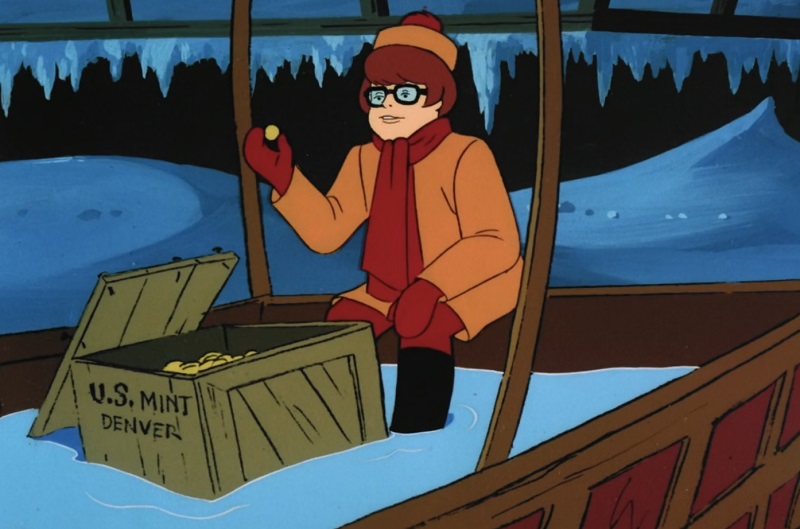 Unmasking the ghost, it turns out to be William Henry who was after the covered wagon. The eagles it was full of referred to $10 gold pieces. Jeremiah was Williams great, great grandfather, and as Velma explains, the gold belongs to uncle Sam.

Velma sounds incredibly wooden and not Velma like at all and it pulls me out of the episode every time she talks. It’s very disruptive and I wish they found a better voice actress who could match how Velma sounded in the 10 years previous to this episode.

This, of course, is out of no disrespect for Marla Frumkin who took over Velma’s voice mid-season. She’s a wonderful voice actress on her own, but as a Velma, she is not well matched. She is exceptional as Mrs. Winters in this episode. That housekeeper came off as mean and crazy. 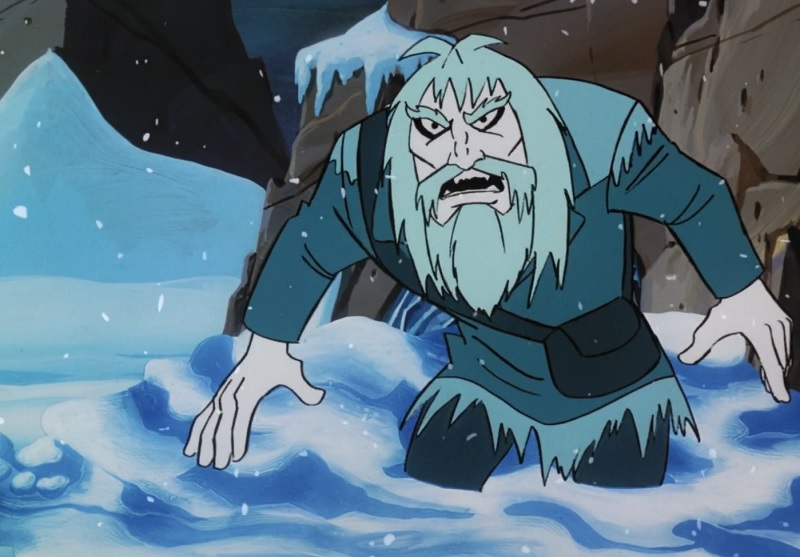 Had Velma been voiced by Pat Stevens, this would have been an 8 for sure, as Velma has a lot of dialogue in this one.
The plot in this one is a lot of fun. Nothing out of the ordinary though, as we’ve seen many a monster haunt a ski lodge by now to scare everyone away so they can get away with their treasure hunts.

The ghost of Jerimiah Pratt is also pretty cool. I dug his look and he is creepy looking with his zombie like mountain man appearance.

Anyway, that wraps up another mystery. Join me next week when I will be covering The Sorcerer’s a Menace.

The Night Ghoul of Wonderworld

Lock the Door, It’s a Minotaur!