20,000 Screams Under The Sea originally aired on November 17, 1979 and is the ninth episode of Scooby-Doo and Scrappy-Doo season 1

Here, we find the gang in sunny Acapulco where they have a run in with the ancient Aztec Sea Beast while attending a cliff diving competition at the Cove of Fear!

Not much trivia for this one, other then we see the gang in their swim gear, as well as Freddy, Daphne and Velma in some scuba gear that is reminiscent of A Clue For Scooby-Doo! 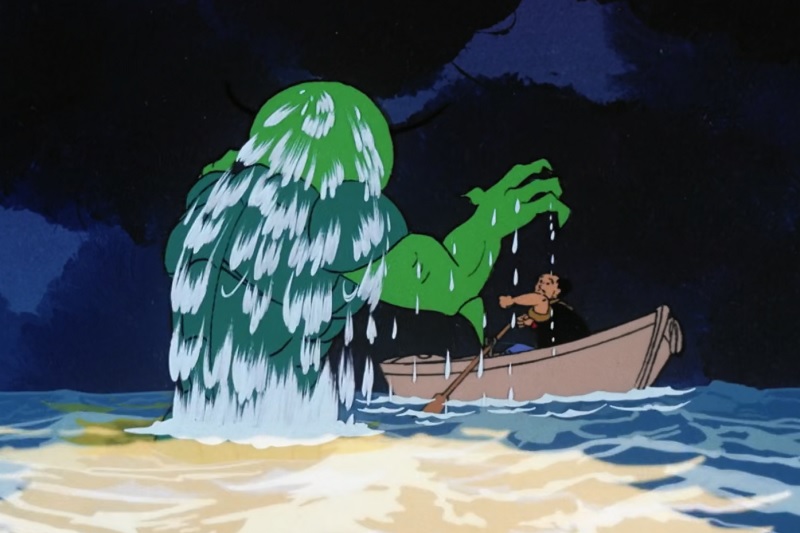 The episode begins with a man in a fishing boat out in a cove. He hears a strange groaning coming up from the sea, and we, the audience get a quick JAWS Point-of-View shot along with some jaws like music. A humanoid sea creature rises from the water and exclaims the ocean is his as the man rows off. 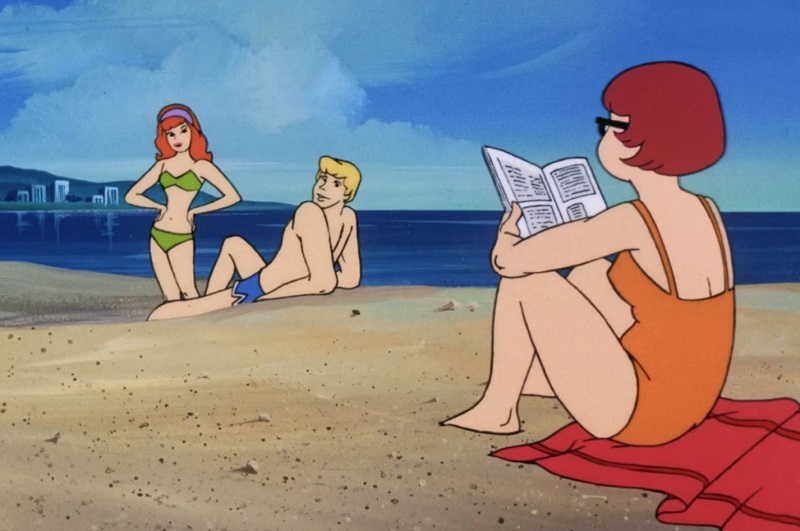 We then cut to the gang on a beach in Acapulco where Velma is reading about this sea creature. We learn it is called the Gruesome Sea Beast of the Aztecs. 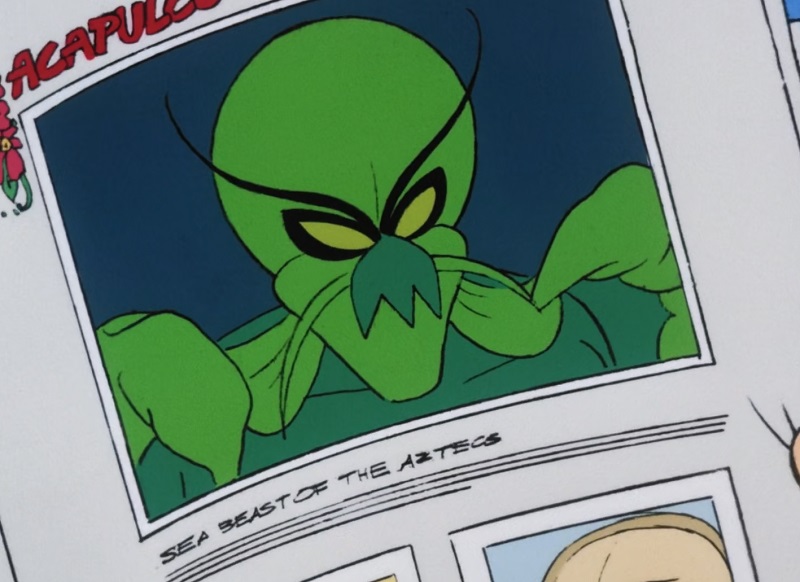 The man who was frightened by the Sea Beast wanders by and tells the gang that the Sea Beast is real and he just saw him last night at the ‘Cove of Fear’. Velma then exclaims that’s where they will be seeing the cliff diving contest this afternoon.

At the cliff diving contest, Tiger Morris shows up late, but shows up just in time. He’s the first one to dive off the cliff, but down in the sea below he sees something terrible before swimming off.

From below we then see the sea beast emerge scaring off all the divers and spectators. Freddy and the girls go down to the cove to investigate while Shaggy and the dogs stay on the cliffs to search for clues. Shaggy, Scooby and Scrappy end up falling down a pit and soon reach up with Freddy and the girls.

With the tide out, Freddy, Velma and Daphne discover a secret cave. Inside they see a shadow, but it’s the man they talked to earlier, Miguel Valdez who has been picking up shellfish. 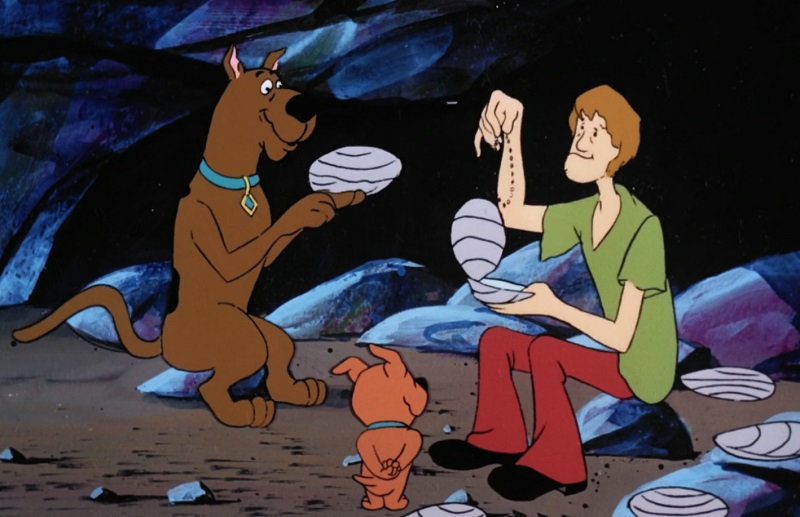 Senior Valdez takes Freddy, Velma and Daphne out in his row boat to the spot where he saw the Sea Beast. Meanwhile, our hungry trio of Scooby, Scrappy and Shaggy open up some oysters and find pearl necklaces inside Before they can investigate further, the Sea Beast shows up and we get a quick chase scene. 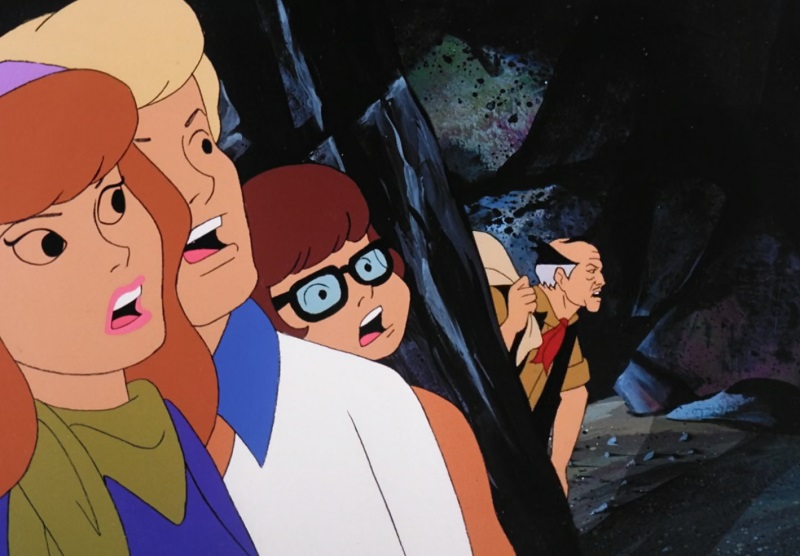 Out in Senor Valdez Rowboat, Daphne spots something huge beneath the boat. A storm starts up and they head back to the cave. A huge wave rolls out and catches everyone in its wake knocking them all back up to the top of the cliff. 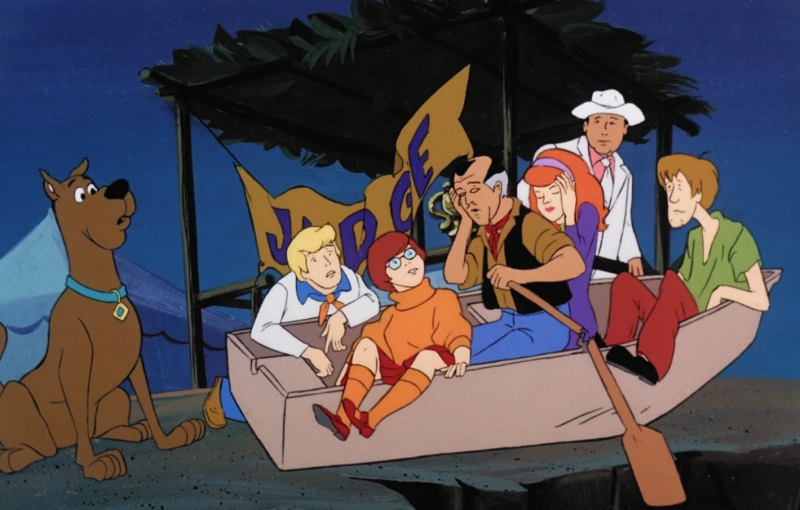 At a Jewelry store in Acapulco, the gang learn the pearls are rare and valuable from Senior Gonzolas as it bears the mark of Spanish royalty from centuries past. We also learn Tiger Morris was recently in the store. 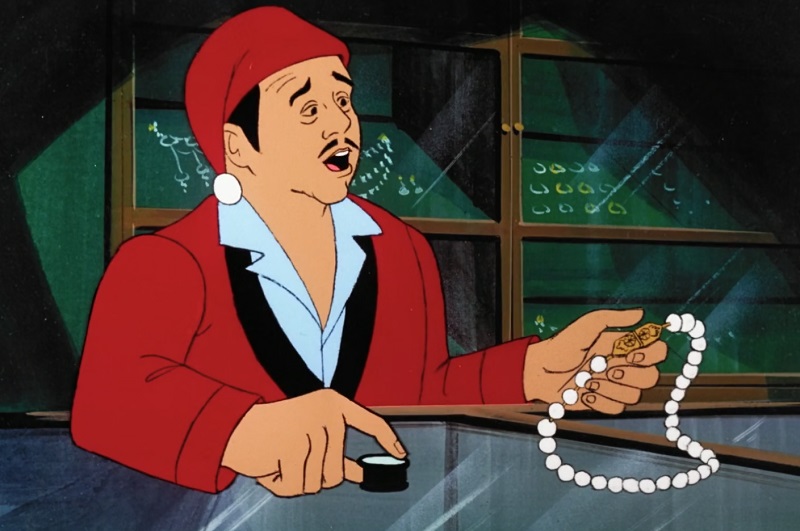 Everyone then hops in a motor boat, and the gang cruise out in a storm to where they saw the super huge shadow from before. Freddy, Velma and Daphne dive into the water, while Shaggy, Scrappy and Scooby tussle with the Sea Beast on the motor boat. The Sea Beast puts a hole into the boat and dives off as the boat sinks.

While diving, Freddy spots an old sunken ship with all of its treasure chests empty. 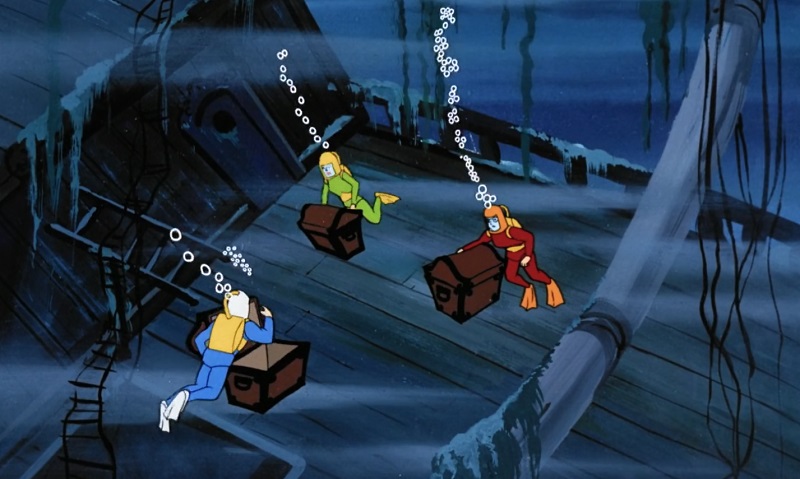 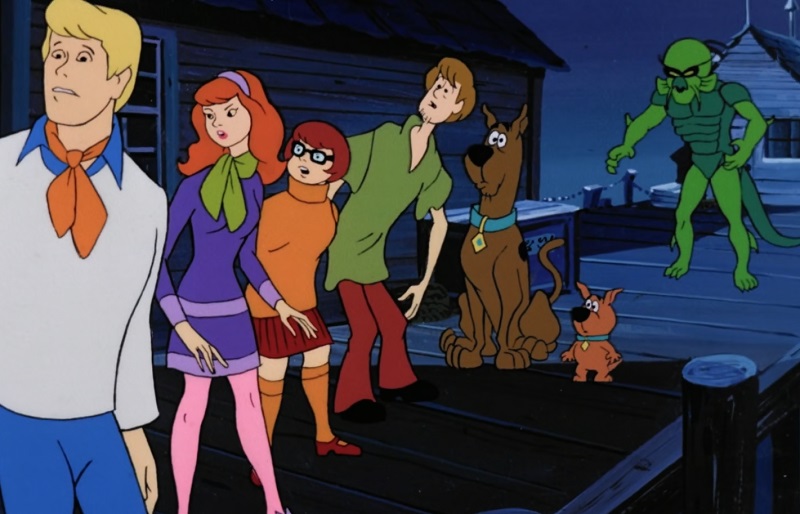 Escaping out a window the gang evade the sea beast and hop into another boat to escape. We get our final chase scene with Shaggy, Scooby and the Sea Beast on a hang glider, where they all get tangled on the mast of a yacht.

Unmasking the Sea Beast, it turns out to be Tiger Morris. All the treasure had been pulled into the coast and gobbled up by the abalone. Tiger Morris made a duplicate number one button so he could be the first to dive and scare everyone away so he could collect all the pearls in peace. 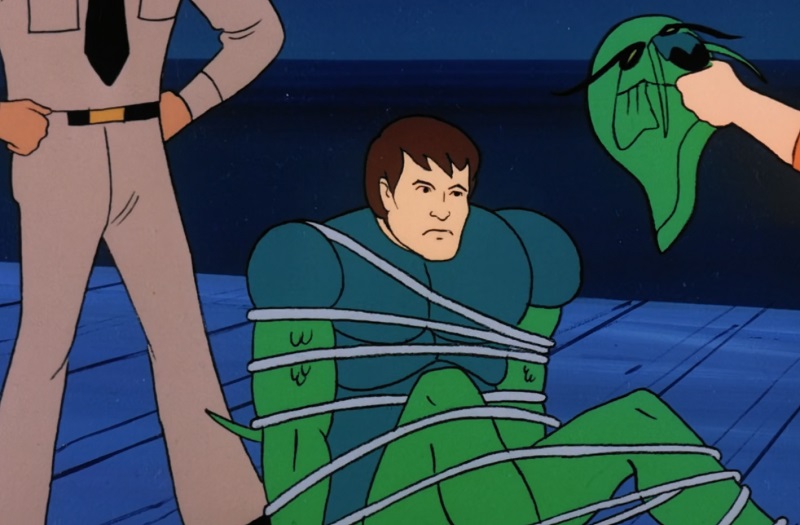 It’s pretty good, but no new ground is covered here. We’ve seen this type of mystery before so it was pretty predictable. The sea monster, while he looks cool enough, isn’t my jam. The humanoid shape makes it feel like a man in a rubber suit.

Still, there’s lots to love about this episode. The gang relaxing on the beach was a lot of fun, and Senior Valdez was one cool dude. The fact that they woke up a jewelry store owner in the middle of the night to inspect some pearls gave a sense of urgency to the episode as well. 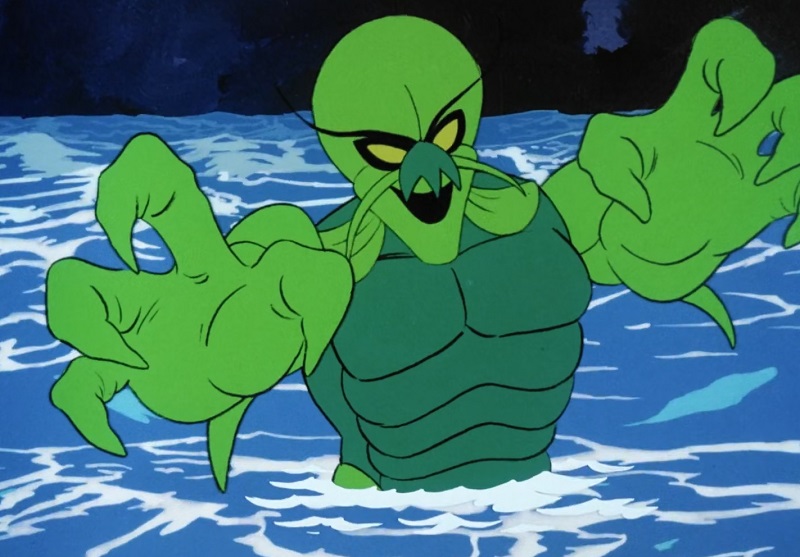 I felt like Freddy, Daphne and Velma have a lot more screen time in this one compared to past Scrappy episodes, although Velma is pretty much the only one doing any detective work in this series and Shaggy, Scooby and Scrappy are just left to do their quick and fun gags.

Join me next week when I will be covering I Left My Neck in San Francisco. Until then, Stay Spooky!