The Hairy Scare of the Devil Bear is episode 8 of Scooby-Doo and Scrappy-Doo season 1 and originally aired on November 10, 1979.

This episode sees the gang visiting the Grand Canyon where they encounter a legendary Devil Bear that haunts the cave dwellings within the Canyon.

Not much Trivia with this one other than it’s the gang’s second visit to some cave dwellings. The first being A Bum Steer for Scooby. We also learn in this episode that Shaggy has a coward’s handbook.

Well enough of my jibber jabber – let’s get on with the review.

The Hairy Scare of the Devil Bear – Episode Review 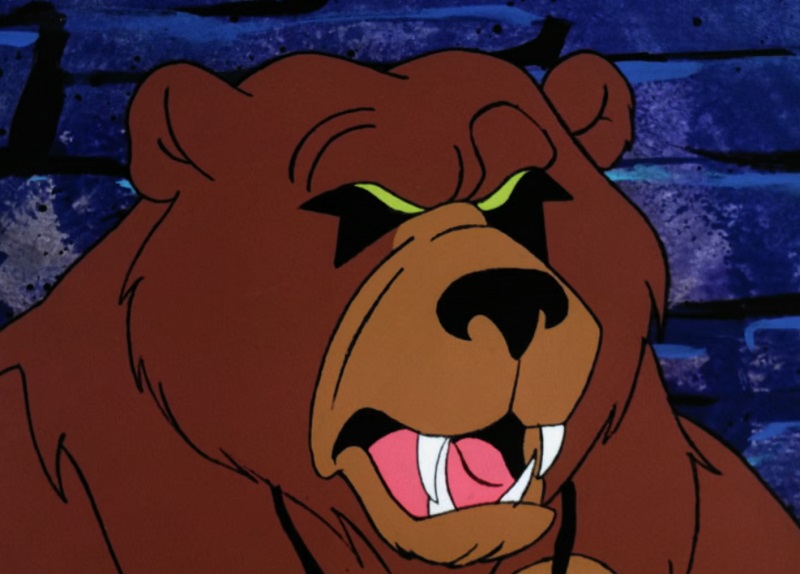 The episode begins with a female archeologist searching around in some cliff dwelling caves. Unhappy that she’s only found some cave paintings and some broken pottery, she soon ends up finding something more fierce. The Devil Bear! 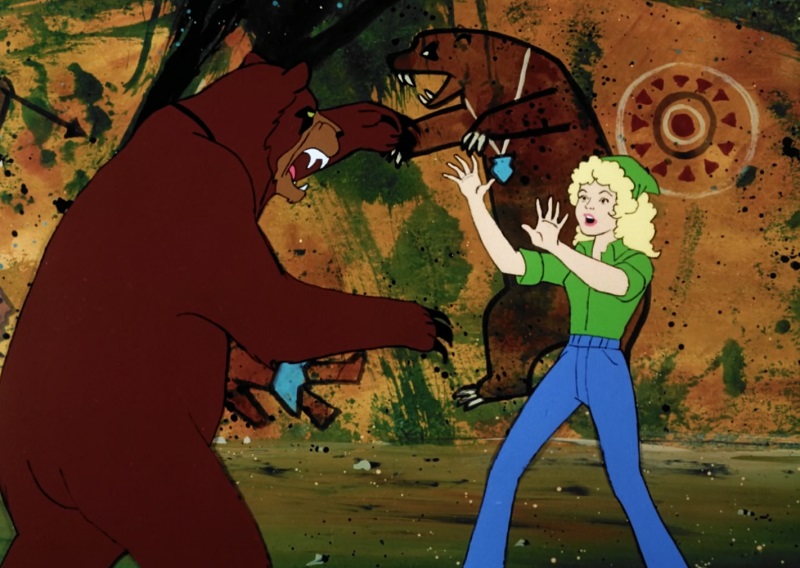 We then cut to the gang on a mule tour of the Grand Canyon. Freddy asks Ranger Brantly about some cliff dwellings, and the Ranger replies that he warned the archaeologists digging around in there that it’s not a safe place to poke around.

Ranger Brantly introduces the gang to Professor Carver, a male archeologist. His partner explains that she recently saw the Devil Bear. The kids are curious and want to look for clues so Ranger Brantly heads off as he wants no part of this mystery.

Velma inspects the claw marks on a cave wall that the Devil Bear left behind. The claw mark has ruined the cave drawing which might be a clue to valuable treasure hidden in the caves.

We then meet Chuck Hunt who handles the radio gear. He tells Dr. Jeff Carver that he’s wanted on the radio. The museum wants to know what’s holding them up.

While eating a snack, Scooby is the first to run into the Devil Bear and during the kerfuffle, he uncovers a room of cave drawings. Velma finds an umbrella in the room which is mighty suspicious.

Professor Carver explains an old hermit named McGee is living in the caves at the bottom of the cliff and the umbrella might be his.

The gang head down to talk to McGee and he’s suspicious of the gang as he feels he’s being spied on. McGee sees himself as an Antique Dealer. McGee also explains the natives left the caves decades ago due to the Devil Bear.

Legend says that if anyone messes with the cliff dwellings, the Devil Bear will walk again. When McGee lived up there himself, he never saw the Devil Bear, and it wasn’t until the archeologists that the Devil Bear showed up.

The gang make camp outside the cave dwellings, and during the night, Scrappy hears the devil bear. Scrappy drags Scooby and Shaggy up the cliffs, and Freddy, Velma and Daphne soon follow.

A quick chase scene occurs between Shaggy and the dogs, and at one point Shaggy is cornered until Freddy and the girls scare him off. While cornered, Shaggy notices he has wet paint all over him. Freddy also discovers a ladder that goes all the way down to the river which is how they suspect the Devil Bear disappeared so fast. 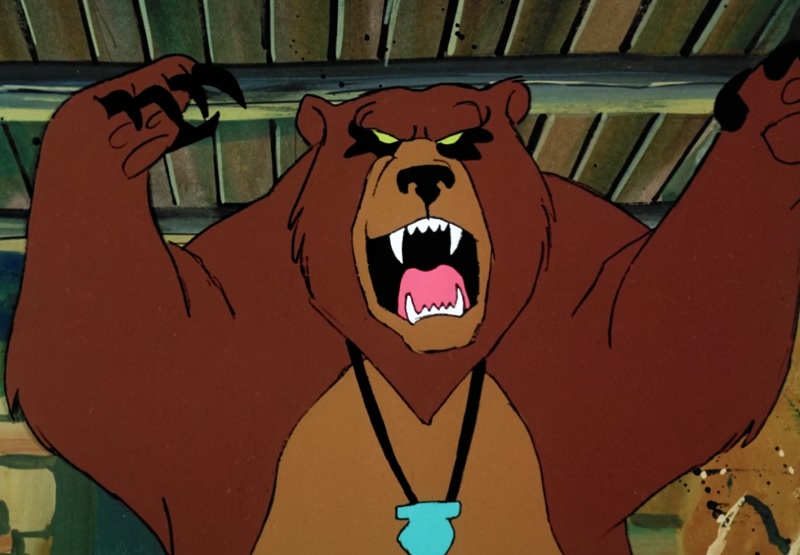 The next day, Scooby once more runs into the Devil Bear and knocks over a hollow stalagmite. Inside the stalagmite, they also find batteries and wires. Freddy, Daphne and Velma follow the wires and it leads right to Mr McGee’s cave where Velma finds a tape recorder.

Shaggy, Scooby and Scrappy meanwhile get themselves in a wild raft ride that brings them to a room full of native relics. And, of course, the Devil Bear is there as well.

We get our final chase scene, and the Devil Bear ends up tangled in an old rug.

Velma figured out the Devil Bear was fake as he left five claw marks on the walls, where a real bear would leave four. The fresh paint Shaggy encountered was also an indication that something was fishy. That fishiness was fake cave drawings to fool the archaeologists so they’d search the wrong areas.

Unmasking the Devil Bear it turns out to be Chuck Hunt. Chuck used a tape recorder, and battery operated lights to make the Devil Bear appear when he was around. Chuck had found the treasure before everyone else and wanted to keep it all to himself.

The Devil Bear looks super cool, I really liked the design of this creature as bears are scary looking, but Devil Bears are even more frightening.

And there’s a pretty good mystery behind this one. It was a bit obvious it was Chuck, but on the other hand it could have easily been the ranger, the female assistant or McGee.

Freddy, Velma and Daphne have a bit more to do in this one, but not much more as Scrappy does take up a lot of screen time. Velma pretty much goes ‘hmmmm – that’s interesting’ while Daphne makes comments about things being odd or strange. Freddy, meanwhile, takes charge and dictates what they should do next.

We also don’t see much of the Devil Bear, and of course that plays into the mystery. When he does show up, he’s not as intimidating as I would like. Yeah, he looks cool, and yeah he leaves claw marks on the walls – but in another scene he give Shaggy a bear hug – and that wasn’t too scary at all.

All in all, I enjoyed this one, and the change of scenery.

Anyway, join me next week when I will be covering 20,000 screams under the sea

The Ghoul, The Bad and the Uglyl