The Scarab Lives! is the very first episode with Scrappy-Doo, and it aired on September 22, 1979.  For this season, Scrappy was voiced by the late Lennie Weinrib, who passed away in 2006.  Lennie’s Scrappy has more of a tough puppy, and perhaps the Bronx accent that sets him apart than Don Messick’s portrayal.

Lennie only voiced Scrappy for one season as he was let go from the role over a pay increase dispute (see Scrappy Days – Part 4 by Mark Evanier).   Before joining the Scooby cast, you can hear Lennie’s voice in the New Scooby-Doo Movies where he played Sedwick Jones in the Haunted Horseman of Hagglethorn Hall and Uncle Nathaniel in the Lochness Mess.  He also had a supporting role as a desk clerk in The Phantom of the Country Music Hall.

Many people auditioned for the role of Scrappy, including Frank Welker, who voices Freddy Jones.  Mr. Welker is even credited as coming up with the phrase ‘Puppy Power’!  The Scarab Lives was also filmed multiple times with many different actors (including Don Messick, Daws Butler and Frank Welker) taking their turn as Scrappy until they finally settled on Lennie Weinrib.

You can read about the whole account of Scrappy-Doo and his creation on Mark Evanier’s wonderful blog.  Mark is one of the writers who wrote for Scooby-Doo back in the day and helped shape who Scrappy was.  The story is also an adaption of Mark Evanier’s Gold Key comic ‘Mark of the Scarab’ from 1970. 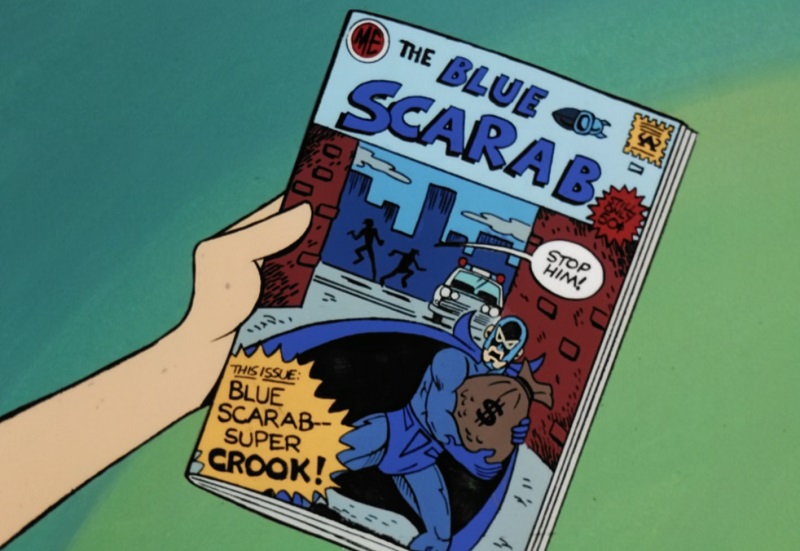 The episode begins with the Blue Scarab breaking into Jerry Sloan’s (a cartoonist) apartment via the rooftop skylight.  While working, Jerry is startled by the Scarab alarm, and then is confronted by his own creation – the Blue Scarab. 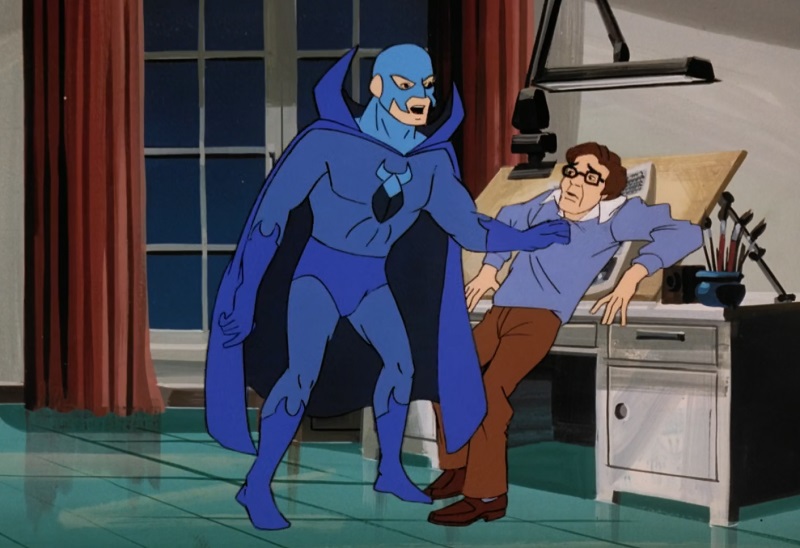 The Blue Scarab shows off his Scarab Sting and then proclaims that Jerry must never draw again, or else he (the Blue Scarab) will turn to a life of crime.  With his final statement, the Blue Scarab vanishes in a cloud of smoke.

We then cut to Scooby, Shaggy and Scrappy reading a Blue Scarab comic book at the Malt Shop.  In the newspaper, Velma reads an article which recounts Jerry’s trouble.  Daphne writes this off as a publicity stunt, but Scrappy convinces them otherwise, so they head out to see if they can help Jerry.

Interviewing Jerry Sloan, he shows them ‘the sign of the Scarab’, which is a gigantic Scarab symbol on his wall.  In the comic, the Blue Scarab leaves this mark to warn criminals that he will be back.
The gang also learns that Jerry has an assistant who does the lettering for the Blue Scarab.  With very few clues to go off of, Freddy asks to meet the publisher, to which Jerry gives him the address.  Shaggy, Scooby, and Scrappy decide to stay behind to read Jerry’s comic book collection, including the latest issue which has yet to hit shelves.

At the publishing company, Freddy and the girls meet Mr. Hardy.  Hardy tells the gang that if Jerry doesn’t keep writing/drawing, he’ll be fired as it’s his number one comic.  A creepy artist with a creepier accent named Floyd Hotchkiss walks by exclaiming that Jerry is a hack and that he should be fired so he (Floyd) can take over.

Back at Jerry’s studio, Jerry is explaining to Scrappy, Scooby and Shaggy how the comics go from the drawing board to their finished form.  Again we hear the Scarab alarm, and the Scarab appears. 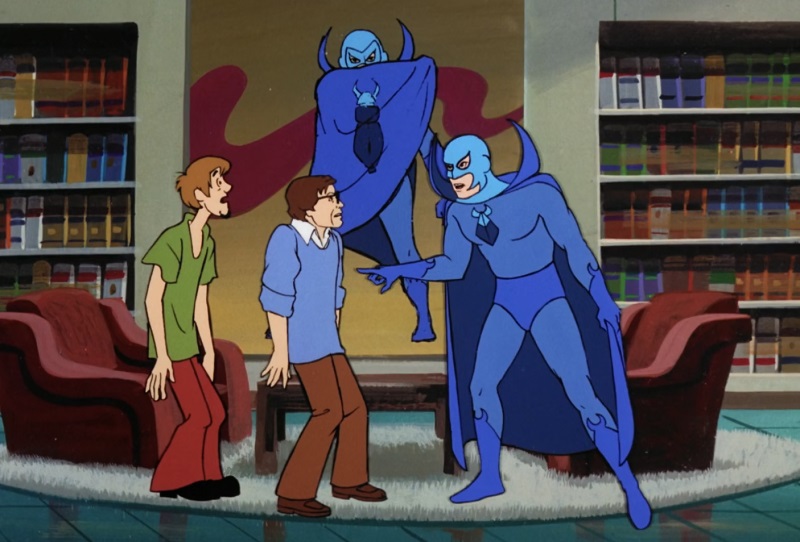 Once more, he threatens Jerry, before, once again, disappearing in a cloud of smoke. Scrappy races after the Blue Scarab and ends up catching Jerry’s assistant/letterer – Howard Gruber.

The rest of the gang run in and between the two groups, they have no idea how the Blue Scarab escaped.  Shaggy also exclaims that in the latest issue, the Blue Scarab is hypnotized by a villain into leading a life of crime.  In this comic, his first crime is to rob a jewellery store.

This brings us to Romeo Jewellery, where the night watchman is reading the latest issue of the Blue Scarab by flashlight. 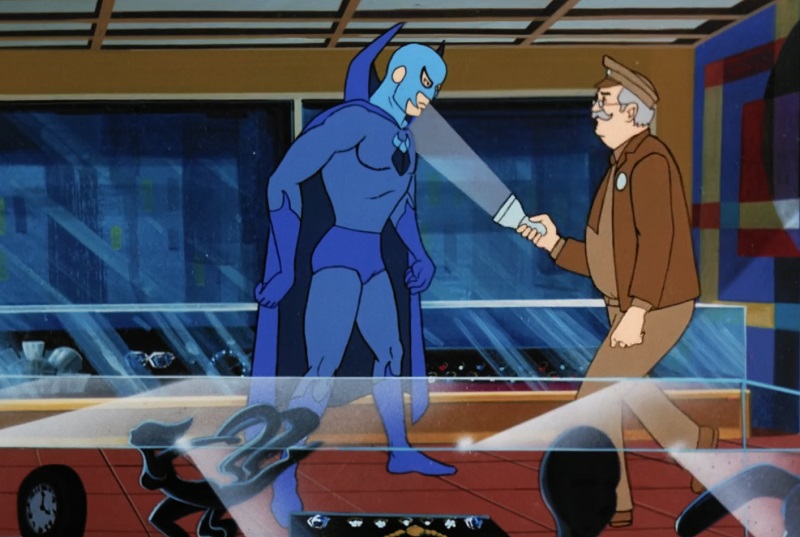 Here, the night-watchman hears the Scarab Signal, right before the Blue Scarab breaks through the front entrance and knocks him out with a jolt of electricity. The Blue Scarab makes off with the valuable jewels, as the guard calls the police for help.

The gang hear about the jewellery store robbery on the radio, so they read the comic to see what happens next, which just so happens to be a bank heist. Seconds later, they hear on the radio that he has already robbed a bank. Reading the comic further, Velma declares his next target will be the city museum.

Arriving at the museum, the Blue Scarab attempts to kill Scrappy by pushing a stone gargoyle on him. Scooby saves the day and rescues the pup just in time. The gang race into the museum and on to the roof to capture the Blue Scarab, while Scrappy stays behind to build a trap. 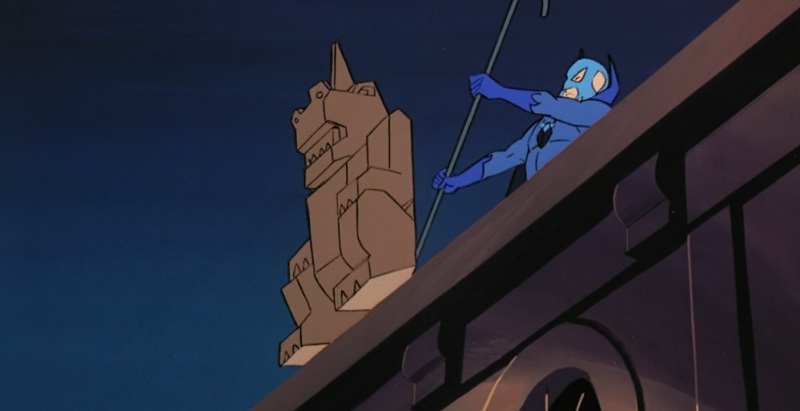 Shaggy suggests he’d rather be in Brazil, where things are safer, but apparently, he’s forgotten the trauma of being captured by headhunters and almost eaten alive by the Jaguaro in Jeepers It’s the Jaguaro.

After robbing the museum of the ‘Ruby Crown’, the Blue Scarab once again escapes. Back at Jerry’s office, he gets the bad news that 1,000 comic book fans have cancelled their subscriptions. Velma suspects the Blue Scarab might sabotage the printing press, so they head off to the publishing factory to investigate. 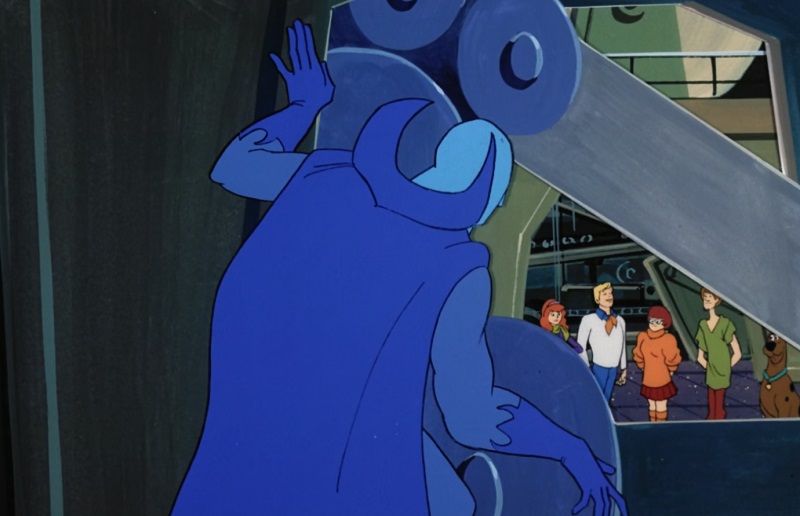 At the factory, Scrappy rushes in and leaps on the Blue Scarab’s head. A small tussle occurs, and the Blue Scarab ends up caught in a roll of paper. Everyone then heads off to Jerry’s apartment, where they unmask the Blue Scarab, which turns out to be Howard Gruber (Jerry’s assistant). 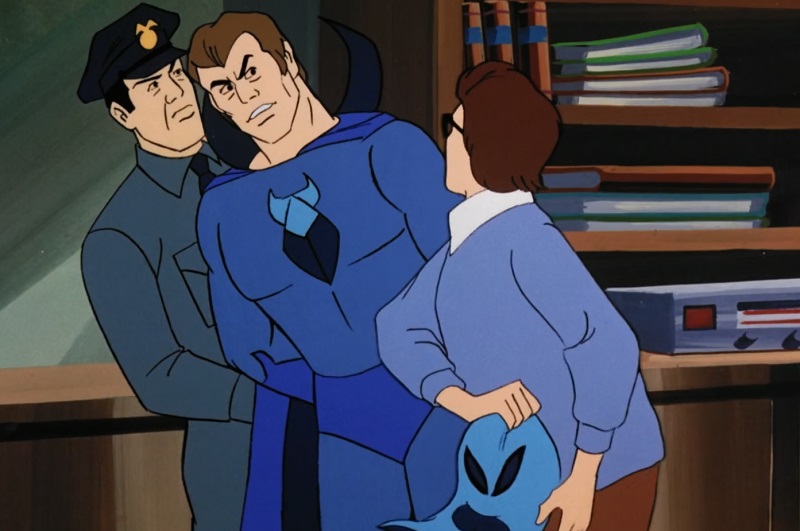 Velma explains that since the comic which the Blue Scarab was acting out was unpublished, only Jerry, Howard and Jerry’s Publisher would know the story. The second clue was that the Blue Scarab had to have been a good artist as he left his drawing of the Sign of the Scarab on the wall.

Howard was jealous of the Blue Scarab’s success and wanted it cancelled so he could start a comic with his own characters.

With another mystery solved, the Blue Scarab is hauled off to jail, and Scrappy suggests that Jerry should start a new hero called ‘The Blue Scooby’.

It’s easy to hate on any Scrappy episode, and say that it stinks, but overall, this is a fun episode. Scooby-Doo still maintains its formula, and yes, Scrappy is annoying, but the plot and villain are clever. It’s a nice change from the ‘Ghost of the Week‘ formula we saw for the past decade.

My main issue with Scrappy isn’t that he’s annoying, but that he takes time away from Velma, Daphne and Fred. They just aren’t given much to do in this episode.  For example, it’s established in this episode that there are something called ‘Scrappy Traps,’ which might be a hint that we no longer see the classic and comical Freddy traps that never work.

The villain is not scary at all, and there’s nothing spooky to be seen here.  My favourite part would have been the old Jewellery store guard reading a comic book by flashlight because that’s how I want to live my life when I’m 65.

Still, a great script, and worth a watch!  The animation is also a notch higher than it has been in the past.  Until next time, Stay Spooky! 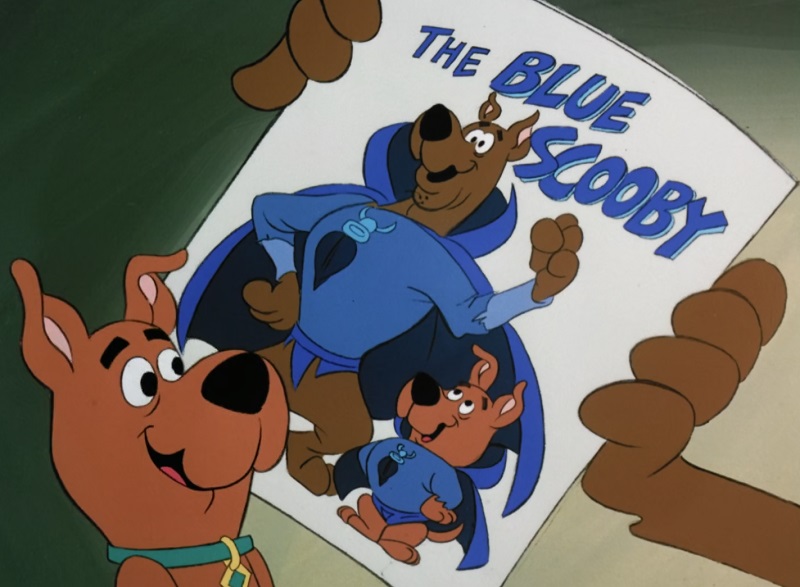 The Night Ghoul of Wonderworld