The Night Ghoul of Wonderworld is the second episode of Scooby-Doo and Scrappy-Doo and originally aired on September 29, 1979.

This episode is a fun take on the classic 70’s tv show Fantasy Island in that people’s wishes are granted, crossed with the 1973’s Movie West World in that the gang are attending an amusement park run by robots.

Mr. Merino, who is Wonderworld’s host, is a fun take on Fantasy Island’s Mr. Roarke played by the always fabulous Ricardo Montalbán. 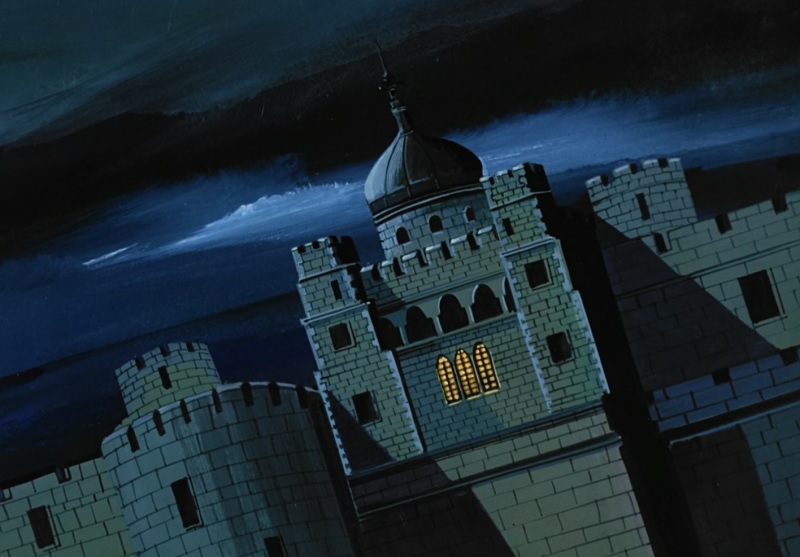 The episode begins inside the Tower of London. We see a beefeater guard and a knight in shining armour guarding the Crown Jewels.

We then see the Night Ghoul of London pop up in a window and pounce towards the two guards.

We then cut to Wonderworld where we learn that Velma is going to have her fantasy of solving a mystery with Sherlock Holmes granted. Wonderworld is a take on Fantasy Island combined with West World, in that everything is done with robots. The host, Mr. Merino, explains that the robots are computer programmed and incapable of harming human guests. 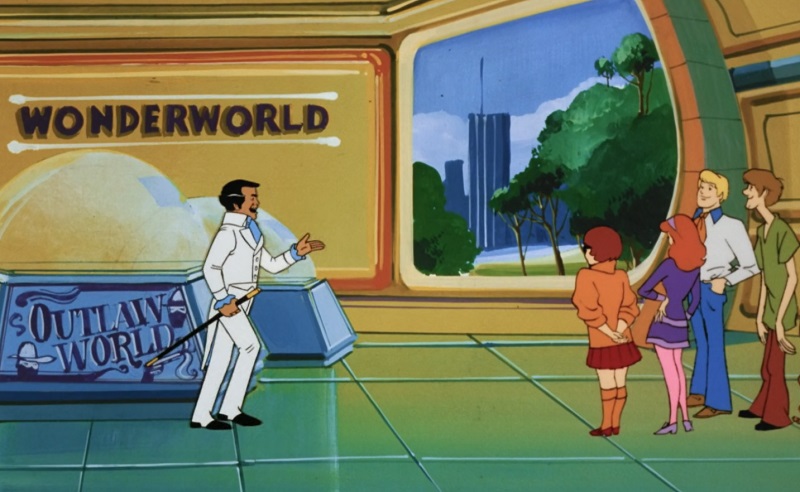 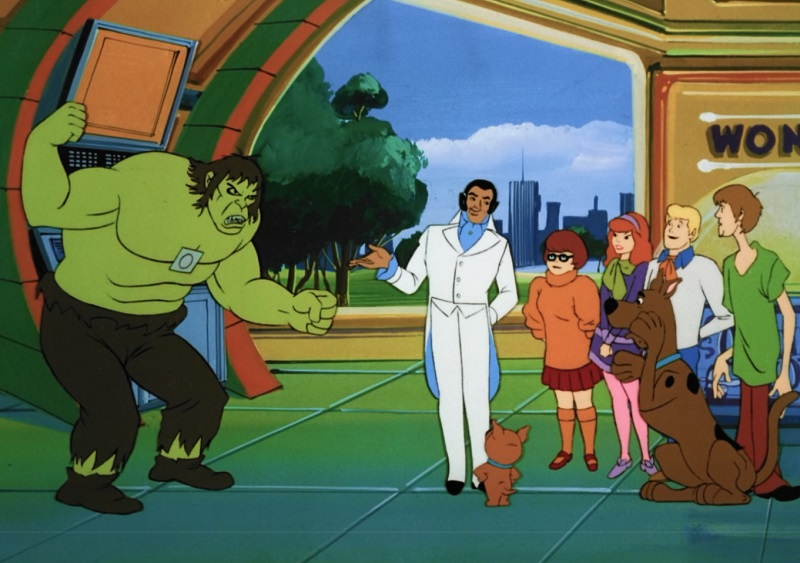 The gang then head off to London World for 3 days, with no chance to leave. Accompanying them is Mr. Alexander Wellhouse, who is an antique collector. Driving the vehicle is Mr. Kimber. 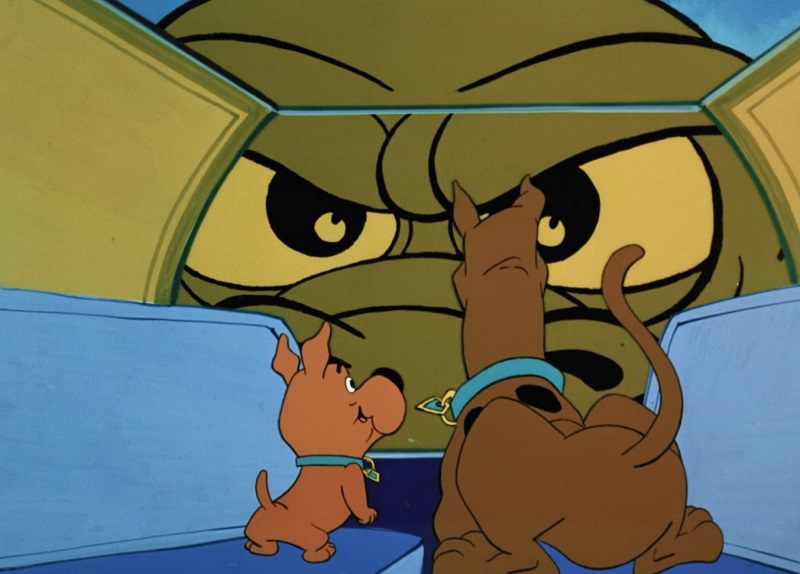 Aboard a monorail, the gang first pass through Prehistoric World, and Outlaw World before reaching London World. There they meet the robot Sherlock Holmes and chit chat with Sherlock at 221 Baker Street. 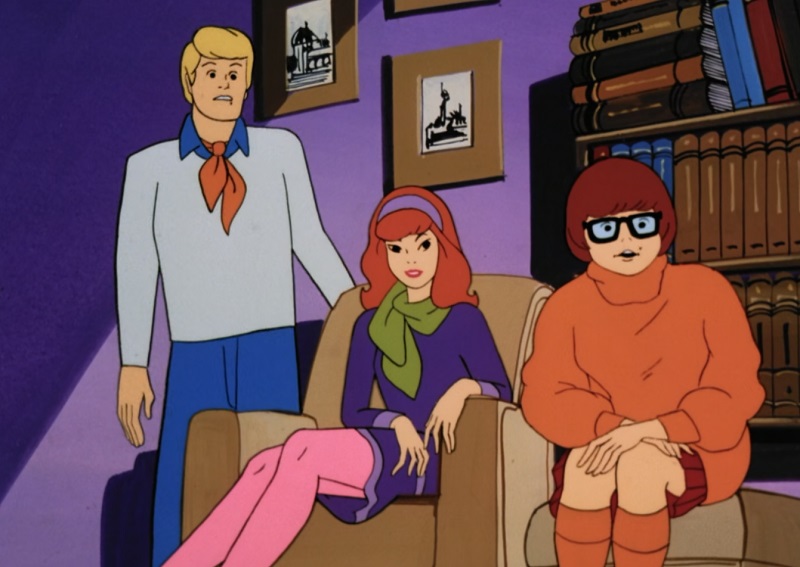 The Beefeater explains the lights failed, and when they came back on the jewels had disappeared. Velma talks to the guard who was on duty the night the jewels disappeared. Meanwhile, Scooby and Shaggy go off looking for the Beefeater’s hamburger reserves and come across a guard who is tied up. They also bump into the Night Ghoul. 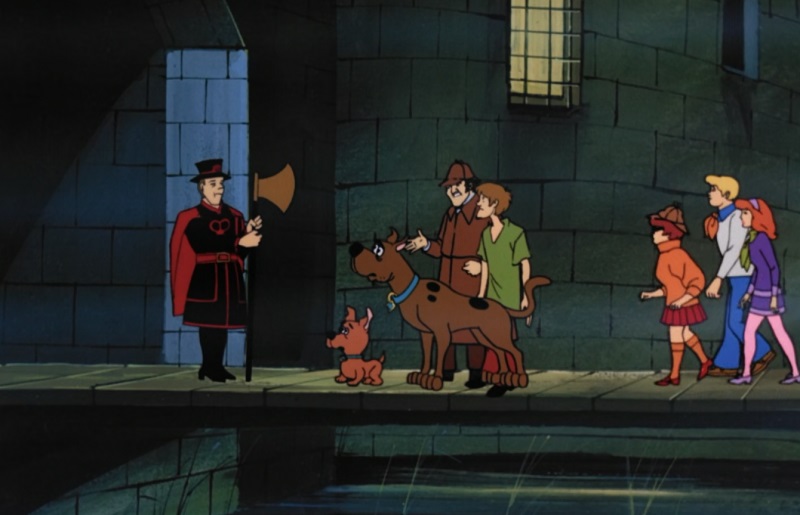 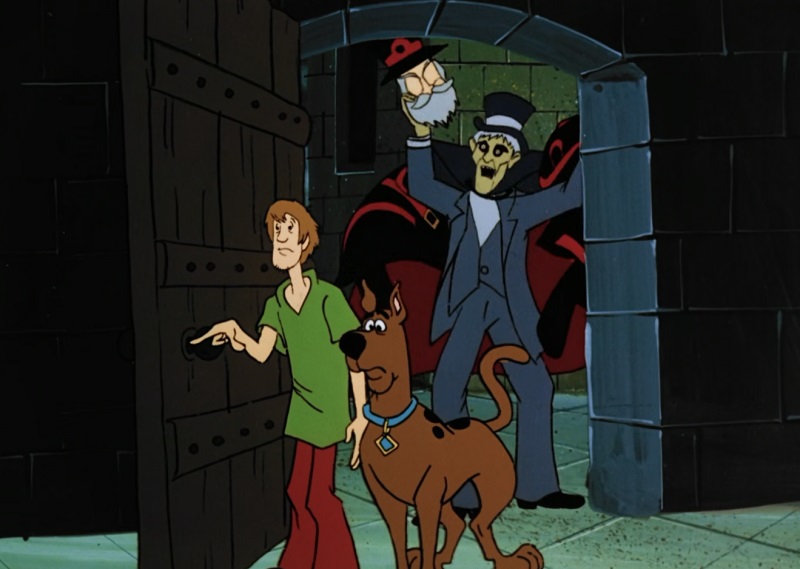 Velma also finds the Crown Jewels hidden inside the room. Saddened that the mystery is over so soon, a new mystery is afoot as the malfunctioning Night Ghoul runs in and steals the jewels once more. 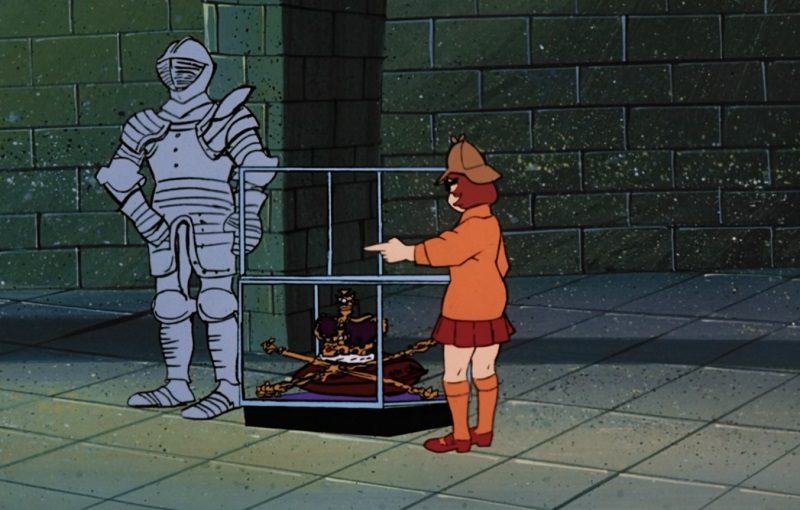 Scrappy, Shaggy and Scooby take chase and soon realize that the Night Ghoul is physically trying to hurt them.

Freddy soon realizes that the robot is malfunctioning so together they all head off to the Black Chapel district and split up. Splitting up, Shaggy, Scooby and Scrappy are the first to run into the Night Ghoul who crawls out of the sewers. 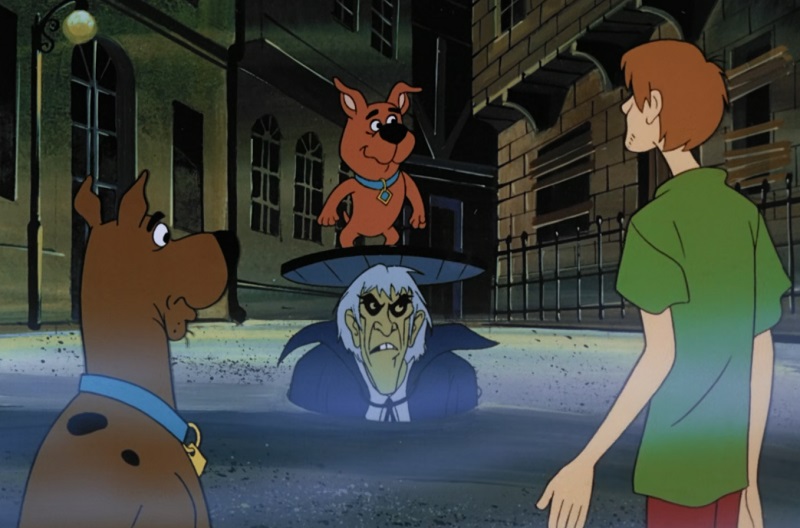 Another small chase takes place, and we get lots of fun chase scene gags, until the Night Ghoul finally shorts out. Velma finds it weird, however, that the crown jewels are not with him.

Mr. Merino shows up and apologies for the Night Ghouls malfunctioning, and promises the gang a refund for solving the mystery so fast. Velma declares she’s not going to leave as the Crown Jewels are still missing. Mr. Merino then gives Robot Sherlock another tuning. 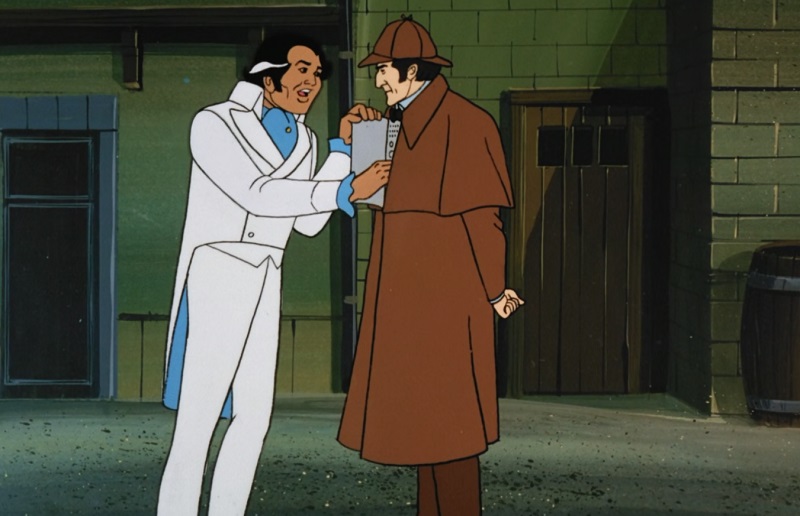 Scooby and Shaggy head into Black Chapple fish and chips where Velma finds a new clue. The newspaper the fish are wrapped in has a strange article about the missing crown jewels. 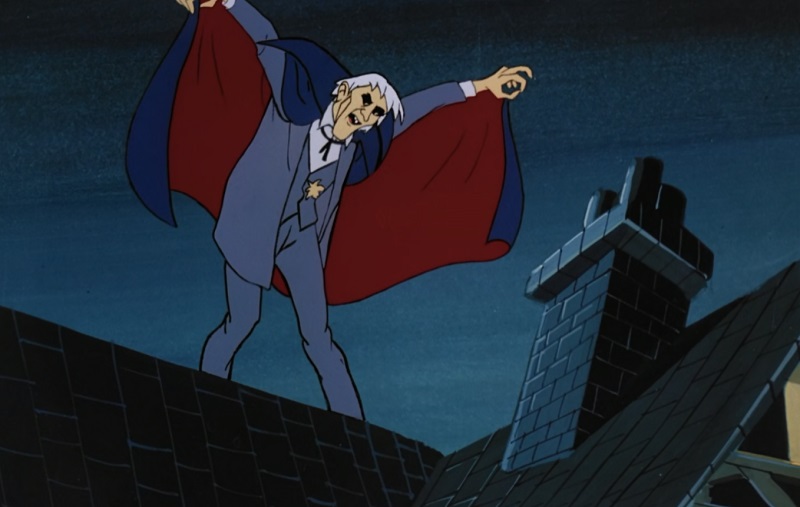 Leaving the fish and chip shop, the Night Ghoul shows up once more, meaning it’s the real thing, as the Robot was carted away. Scrappy goes in to attack him, and chases the Night Ghoul into the Half-Penny Bookstore. There they run into Mr. Wellhouse, along with a book about the Night Ghoul.

In the book they find his hiding spot as the four faces of time. Velma thinks it refers to Big Ben and its four clock faces, however Sherlock says it’s the four walls of Westminster Abbey which has stood for a long time. Splitting up, Shaggy, Scooby and Scrappy head to Big Ben and immediately run into the Night Ghoul. 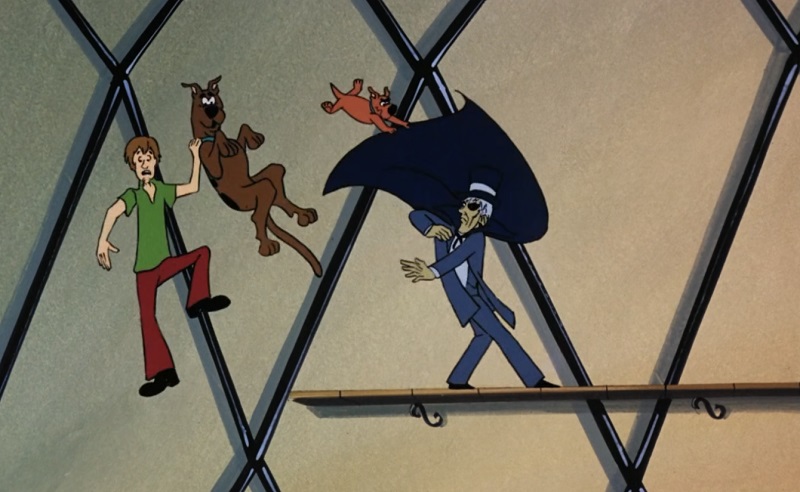 Scrappy dukes it out with the Night Ghoul and Shaggy sets the clock to midnight which strikes its bell. Sherlock soon malfunctions, and Velma figures out that they need to rush to Big Ben.

The clock soon malfunctions and spits out gears knocking out the Night Ghoul. We soon discover the real crown jewels from the real tower of London which were stolen in real life and that Mr. Merino was behind the whole mystery. Velma figured out that when Mr. Merino examined the robot Sherlock, he caused him to malfunction. She also found it suspicious that Mr. Merino knew about the missing jewels when only the computer knew what was going on. 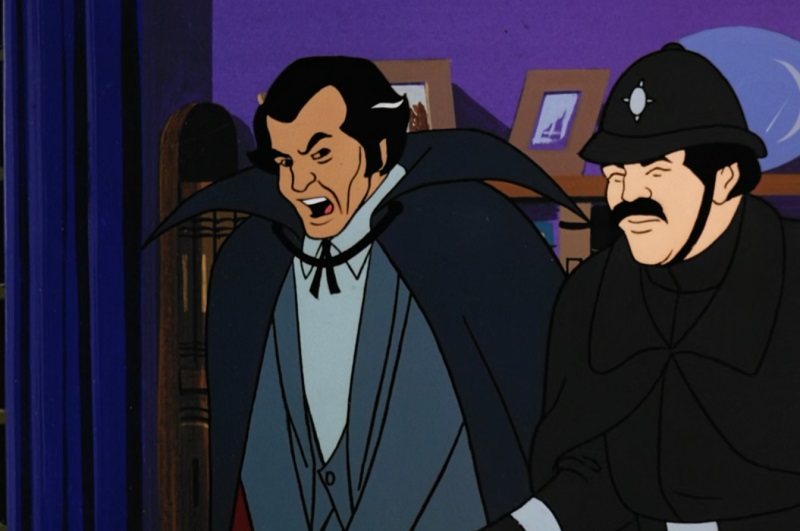 With another Mystery solved, the gang head off on their next adventure.

Overall, this is a fun episode and Scrappy isn’t too prominent in it, so we get lots of time spent with Velma, Shaggy and Scooby. Daphne and Freddy take a bit of a back seat, but seeing as this is Velma’s fantasy, she gets a little more time on camera than normal.

The plot was a lot of fun, and timely for the 1970s. Seeing as Westworld and Fantasy Island were given reboots not too long ago, it’s a bit timely now and modern audiences might understand the references.

The Sherlock angle was fun, and I liked the references to 221 Baker Street and Watson. The Victorian era London locations were cool to see as well.

The Night Ghoul looks creepy, and the fact that he’s malfunctioning adds some danger to the episode. Scooby and Shaggy thinking that Beef Eaters have cache’s of Beef hidden around castles was funny as well.

The mystery itself is flawed and a bit confusing, so it’s not the best. Plus, even though Scrappy doesn’t get a lot of time in this one, the addition of Scrappy also takes away from the gang dynamic, in that Freddy and Daphne don’t have much to do.

Anyway, that wraps up another mystery. Join me next week for Strange Encounters of a Scooby Kind.

Lock the Door, It’s a Minotaur!