Strange Encounters of a Scooby Kind originally aired on October 6, 1979 and is the third episode of the Scooby-Doo and Scrappy-Doo season.

Here we see the gang out near the canyons for a hiking expedition where they encounter a glowing Alien and its Flying Saucer. There’s also been a billion dollar theft of nuclear materials.

It’s a fun little science fiction based episode, where Shaggy even gives Luke Skywalker a mention.

I also have to mention that people certainly dislike Scrappy. Take a look at my YouTube metrics. You can see a 90% drop off in episode views from when I shifted from Scooby episodes to Scrappy episodes. With at least 3years remaining of me covering Scrappy episodes, I’m not going to have many people watching my reviews.

Oh well, it’s not something that really bothers me as I don’t make these vids for glory or money, but rather to chit chat with Scooby fans as well as my own interest in rewatching these fun episodes.

The episode begins with a police car changing a car where the driver has stolen millions of radioactive materials from a nuclear laboratory. Inside the car we see the thief is a glowing alien-like creature. 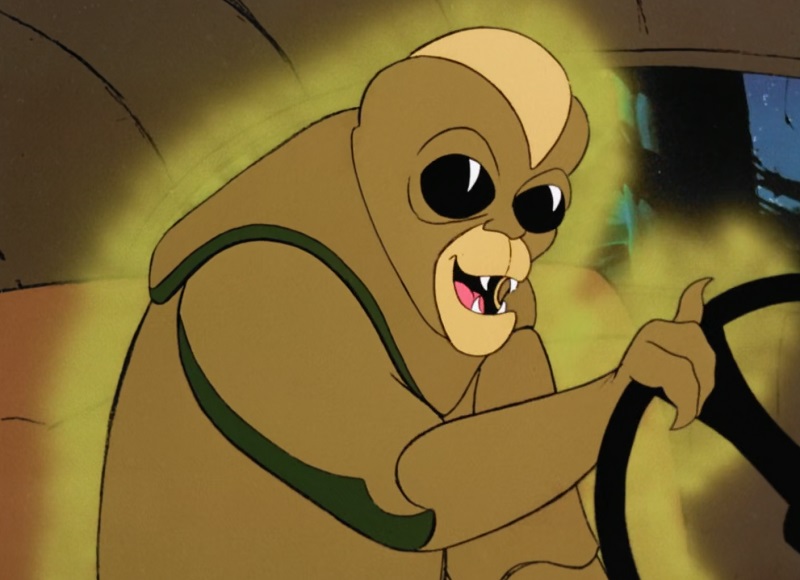 Out on a hike at night near the canyons, Scooby, Shaggy and Scrappy run into the thief as he stops his car, gets out and summons a flying saucer to appear. Realizing he’s in over his head, the police car taking chase leaves the site immediately, leaving Shaggy, Scrappy and Scooby alone with the alien. 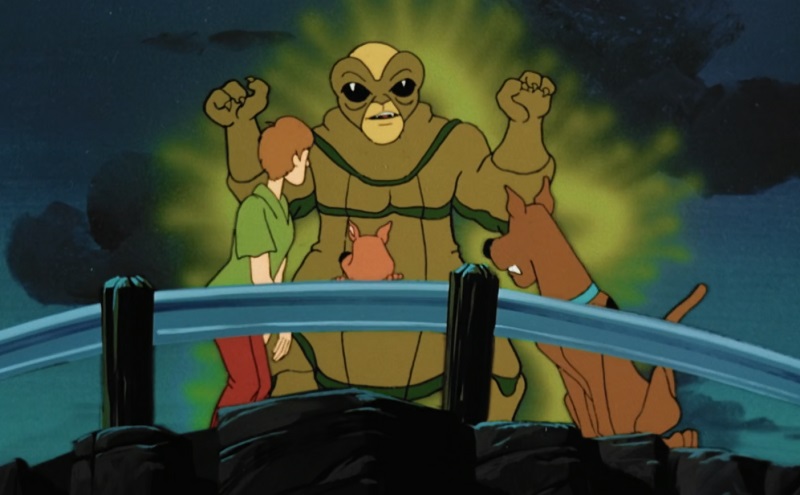 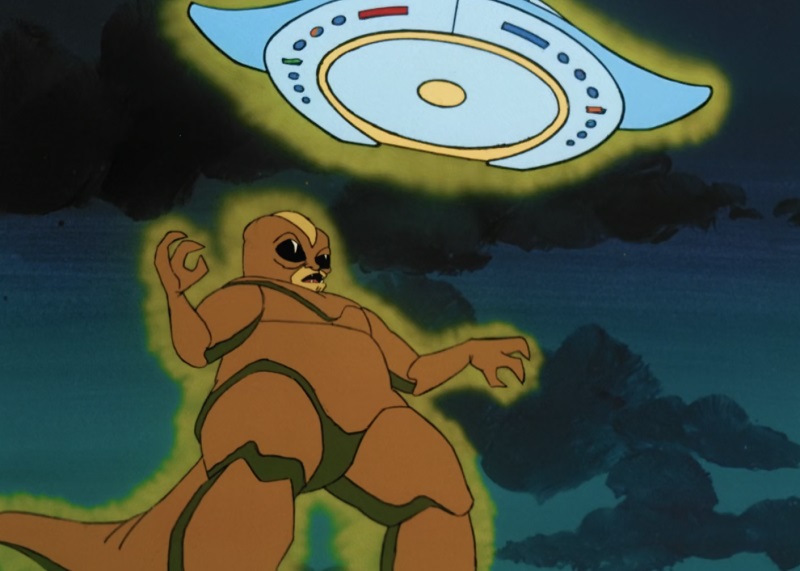 At the Blue Pine Motel, Freddy and the girls realize that something is up as there are no other hikers staying at the peak of the season. Shaggy, Scooby and Scrappy soon rush in and explain what they had just saw. 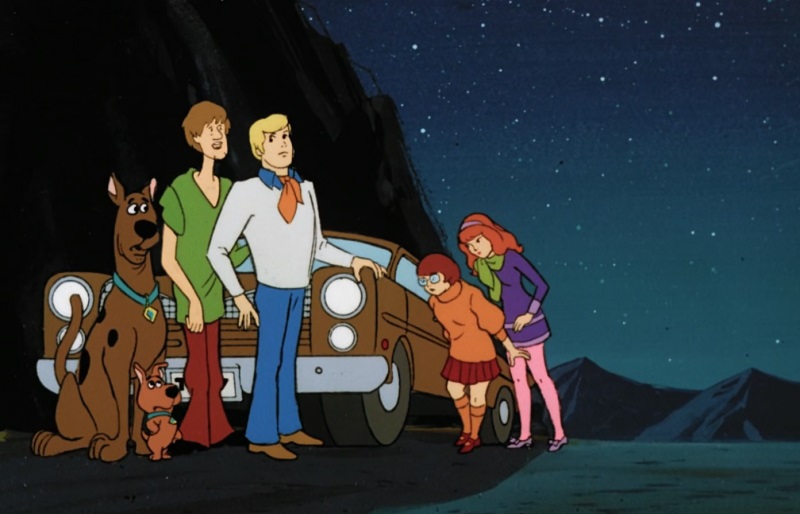 The glowing alien then shows up and takes chase after the trio who barricade themselves in a cabin.

Meanwhile, Freddy and the girls head off to the police station where they learn of the billion dollar theft and see images of the alien. They rush back to meet up with Shaggy and the dogs and get trapped in a trap made by Scrappy.

Outside, Scrappy tackles the motel owner named Mr. Moss and steals his boot. Mr. Moss tells the gang they should leave due to the flying saucer sightings and then vanishes.

We then meet a lady named Tessy with a mule named mule. She says she doesn’t trust Mr. Moss and all the talk of flyings saucers is foolishness. Scrappy also finds a Geiger counter owned by Tessy who tells them that there’s a lot of radioactive activity coming from Mr. Moss’s office. 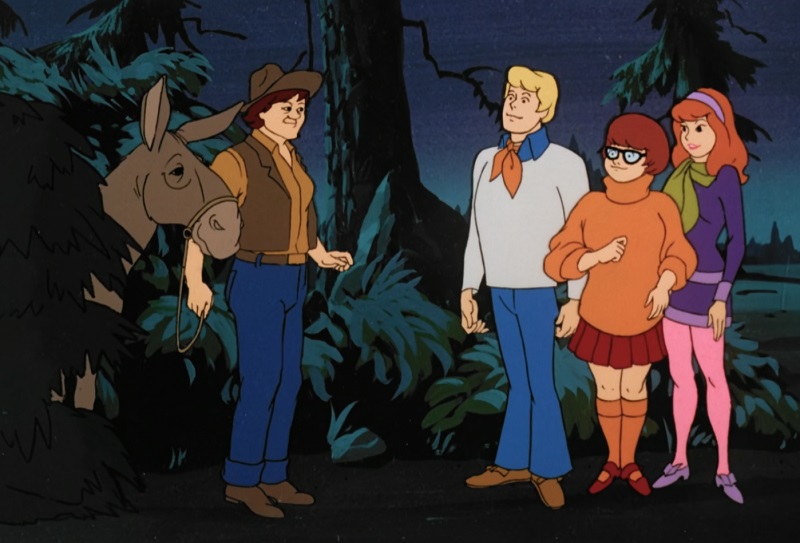 A flying saucer then appears and beams Tessy and her mule away. The saucer leaves and Velma finds some sort of weird device left in its wake. 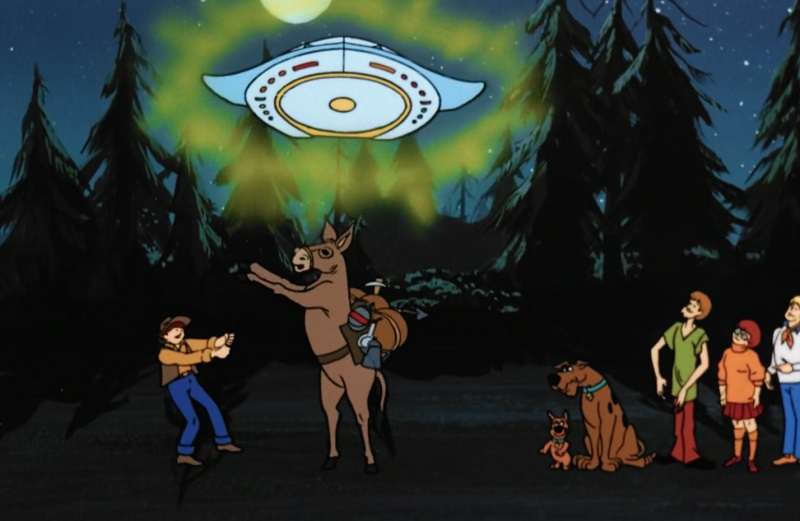 Scrappy leads everyone to the construction site he found earlier, and they realize no work has been done, but the crane engine is incredibly hot which is super weird. 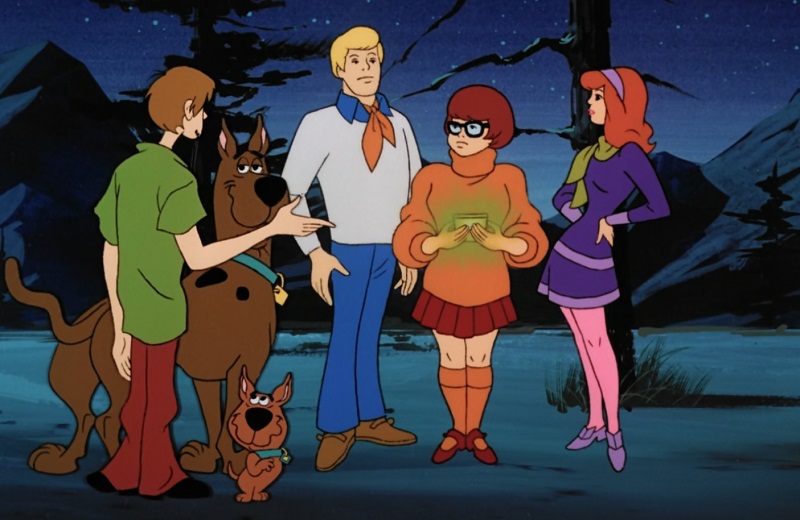 Everyone heads back to Mr. Moss’s office so they can use the phone. The door is locked, but Scrappy breaks in and opens the door. Scrappy also finds another device, but it just turns out to be a remote control for the television set.

The office phone is dead, however, Velma finds a glowing alarm clock on the window sill which is just enough for her to figure out what’s going on.

They all head back to the construction site, and Velma sets her trap using Shaggy, Scooby and Scrappy as bait.

Shortly after, the flying saucer shows up and our trio runs inside it. The saucer takes off and after it lands, Shaggy, Scooby and Scrappy exit it and find themselves inside a cave.

They also encounter the alien and hide behind barrels labeled Nuclear Laboratories. The chase goes on for several minutes until Freddy and the girls figure out that the flying Saucer was controlled by a crane at the construction site. Taking control of the crane, Freddy is able to capture the alien. 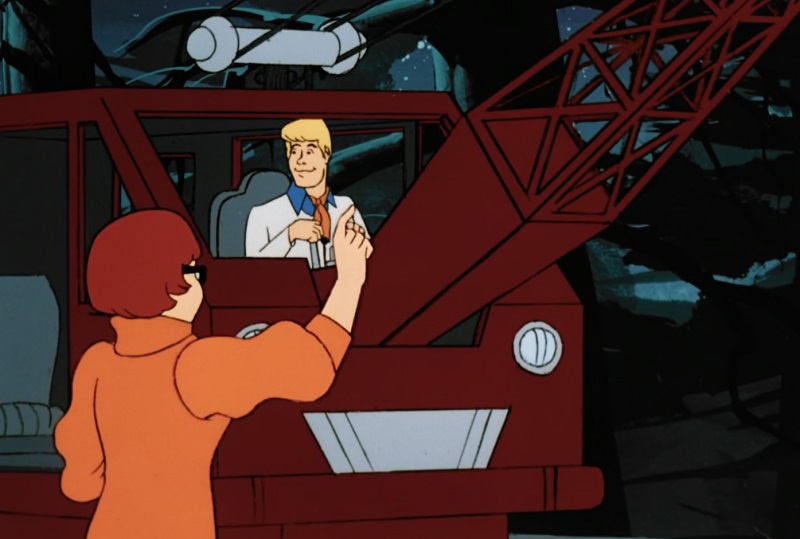 Back at the motel, the police show up and Velma explains that the Alien was using phosphorous paint to glow in the dark, which is why they found handprints on the car steering wheel.. The hot crane engine was clue number two as it meant it was being used. 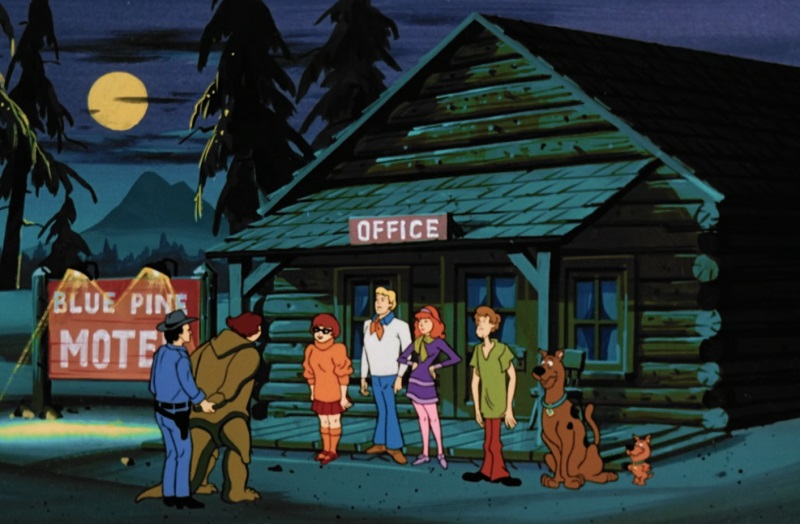 The flying saucer could be operated by remote control, and it turns out Tessy was behind the whole plan. She used the UFO to distract the police and while they were busy she could sell the radioactive materials. 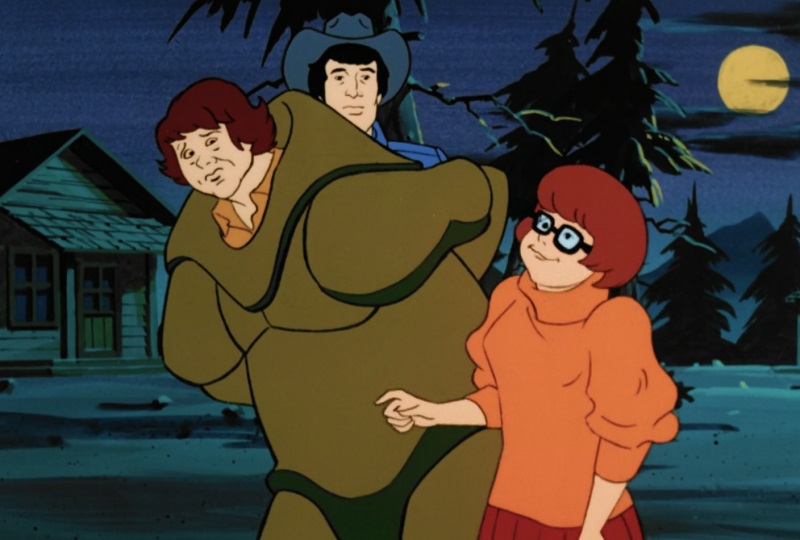 It was pretty good, but one of my least favourites so far from this series.

It’s veered away from Spookiness and into Sci Fi, which I don’t mind, but don’t enjoy as much as the spookier episodes. You could tell this episode was inspired by Star Wars, and given the title, Close Encounters of the Third Kind, which were popular at the time. Scooby even imitates the Twilight Zone theme at one point.

Also, the alien design was cool enough, but I didn’t love it. It looks like it would fit right in at the Cantina scene in star wars.

The UFO design was rather generic of the UFOs we saw in 1950s movies like Plan 9 from Outer Space.

Scrappy was okay enough in this one, but with him building traps and finding clues he stole a bit of screen time away from Freddy, Velma and Daphne.

All in all, this one wasn’t bad, and I wouldn’t mind watching it again, but it’s nowhere as good as any episode of The Scooby Doo Show or Scooby Doo Where are you.

Well that wraps up another mystery, join me next week when I will be covering the Neon Phantom.