The Neon Phantom of the Roller Disco originally aired on October 13, 1979 and is the fourth episode of Scooby-Doo and Scrappy Doo

Here the gang are in Hollywood California where they encounter a glowing phantom at a Roller Disco.

If you were born in the 2000s you might not know what a roller disco is. They were very popular in the 70s and early 80s. It was essentially an arena with a rink where you’d skate on roller skates which were skates with four wheels. In the background, loud rock music or disco music would play. They often contained arcades and served junk food – making it a fun place for teenagers to hang out.

I went to a few Roller Rinks as a kid for birthday parties. I mostly just played the video games as I am a terrible skater. During that era, nobody ever wore helmets, so I have lots of friends who had broken wrists or who have fake teeth from slips and falls.

By the late 80s Roller rinks fell out of popularity. In the 90s Roller blades, a variation of roller skates, became popular and some of these facilities stayed open, but most were gone by the year 2000.

Today, Roller Derby is now a popular event which is something that was a hit back in the 70s as well and had a few movies made around the sport. I don’t understand at all, but I can see its appeal.

The Neon Phantom of the Roller Disco – Episode Review 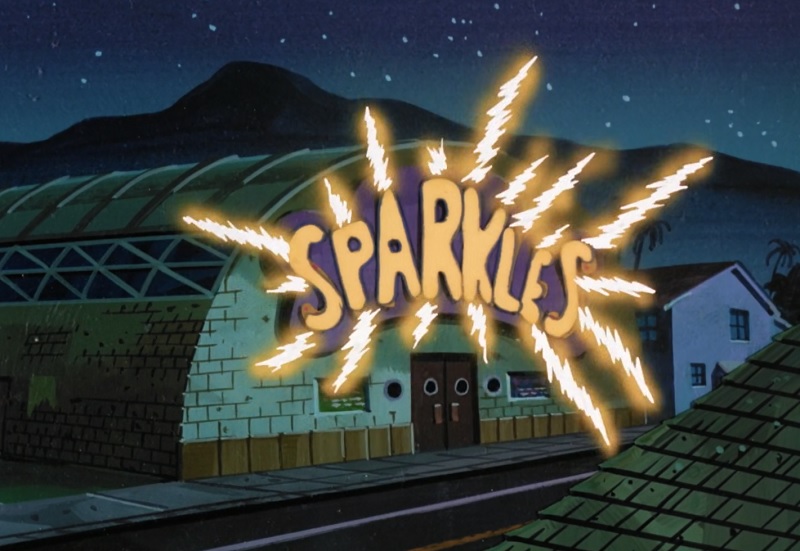 The episode begins with the Neon Phantom bursting out of Sparkles – a Hollywood roller rink. The Neon Phantom has this glowing crash test dummy look that glows with neon electricity.

The gang are on their way to the Chinese Theatre in Hollywood where Shaggy’s excited to see the premier of the film ‘Hair Grease Fever’. Scrappy is giving directions and they end up at the Hollywood Bowl where Nightmare (a rock band) is playing. Excited to see the band, the gang get tickets.  They get the cheapest seats and sit at the very back of the bowl. 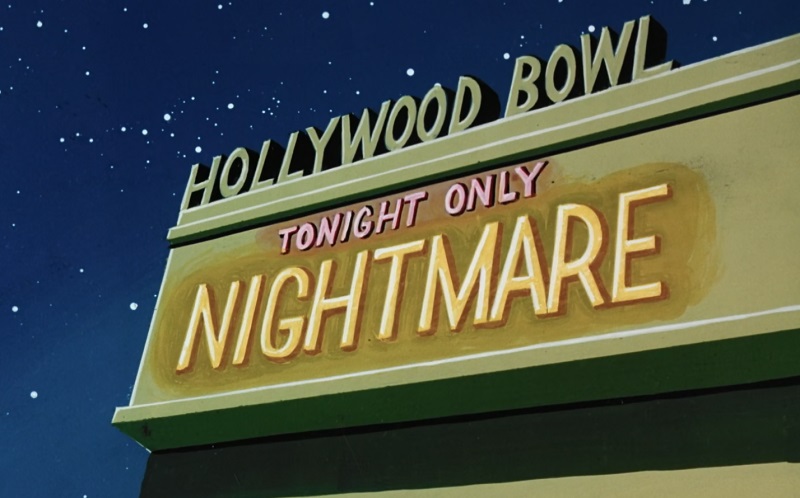 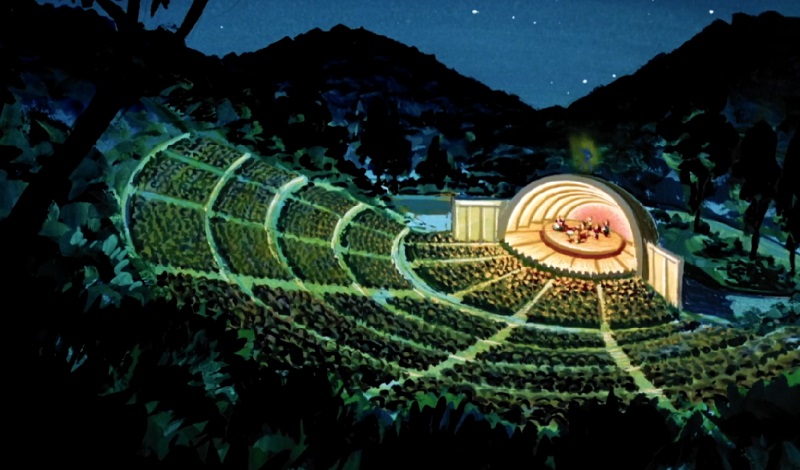 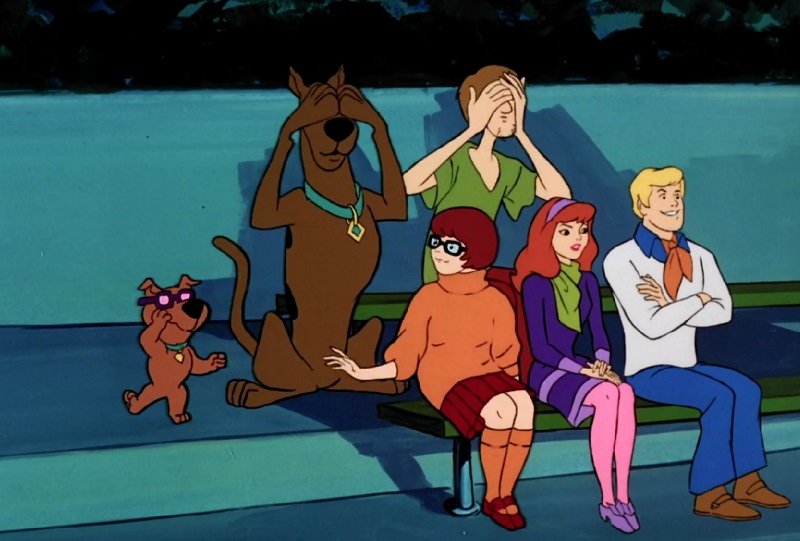 Midway through the set, the Neon Phantom appears on top of the bandshell and stops the show claiming that he feeds on electricity and nothing will stop him.

Instead of heading to the movie, the gang head to Sparkles, the roller disco where the Neon Phantom haunts. There they see the Neon Phantom run into the building, and Scrappy runs out immediately to chase the phantom.

The roller disco is locked up tight, and when they try to break in, a burglar alarm goes off. Bill Walker, who lives in the house next door steps out and asks the gang what’s going on. Sparkles is his landlord, and Bill Walker lives next door to keep an eye on the building.

Bill Walker walks away, and Scooby finds an advertising flyer that says ‘Avoid the Lines – Come Early to The Sparkles – Roller Disco. 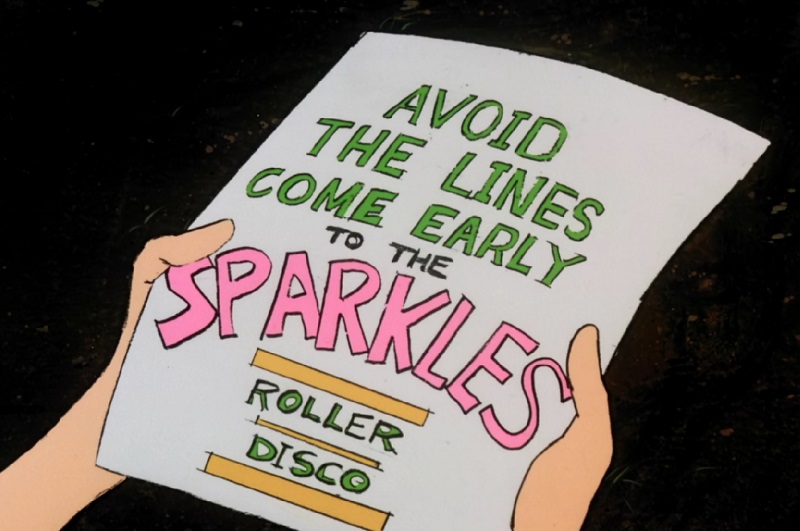 Shaggy wonders what lines as the place is clearly closed. During the commotion, Scrappy has also busted down the back alley door, so the gang enter Sparkles.

Splitting up inside, the gang search the Disco. Shaggy, Scooby and Scrappy head to the Main Disco Room and spot a Dinosaur projected on a movie screen. The lights then go off and a voice comes from the DJ Booth. 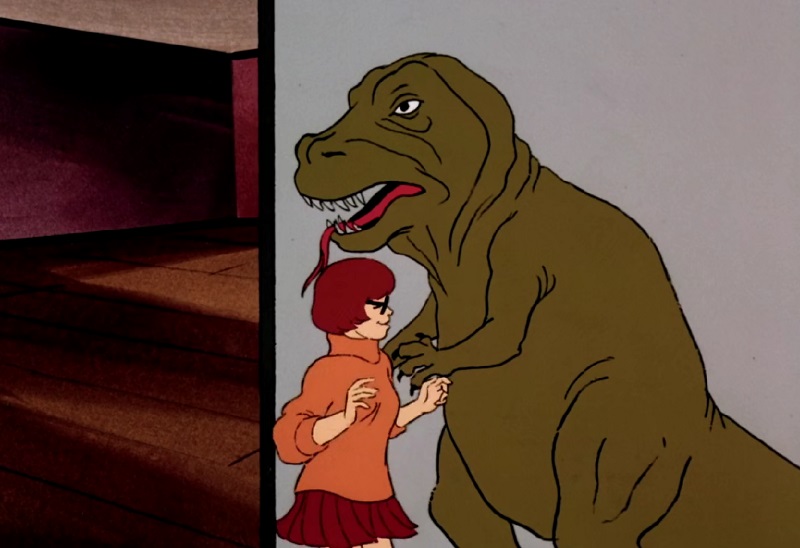 Scrappy confronts the voice and it turns out to be Joey Cassette, one of the owners of Sparkles. Joey closed the Disco early that night so he could work on a new Disco Show.

They also meet Steve Shimer, Joey’s partner. Steve and Joey explain the Neon Phantom is ruining their business, scaring everyone off in droves. Steve wants to close it permanently and Joey wants to buy out Steve’s shares. But Steve walks away without any comment.

The Sparkles Rock group is recording a new album that night, and the gang are invited to stay to watch. Shaggy, Scooby and Scrappy rather see the movie and head off to the Chinese Theatre. 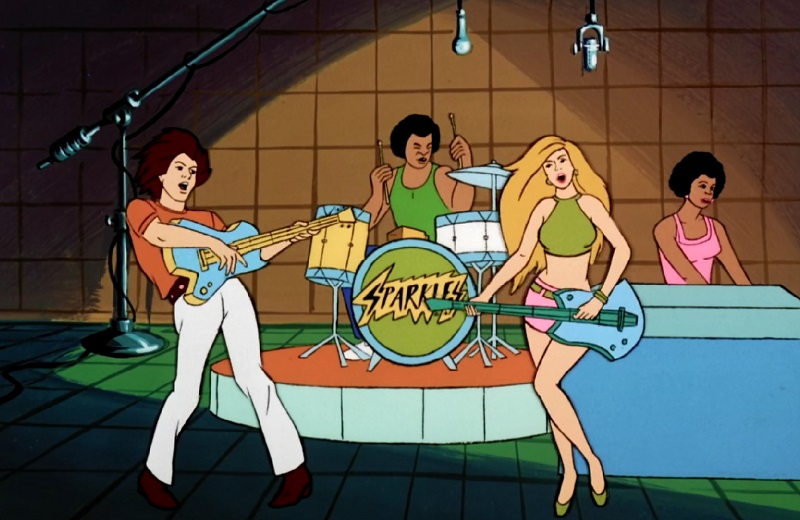 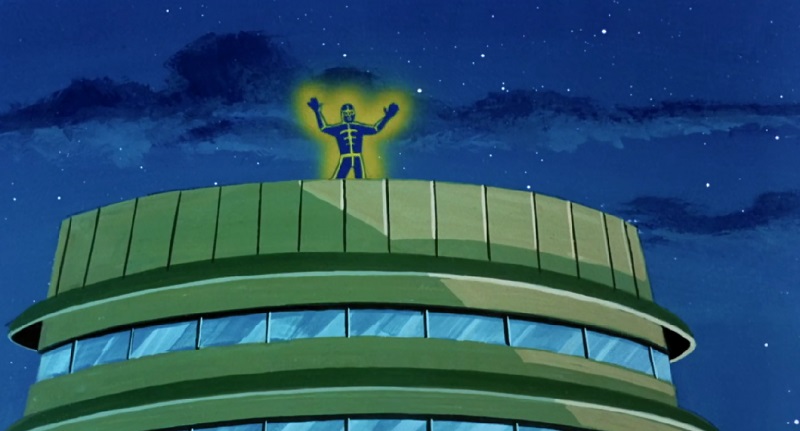 Velma then deduces the Neon Phantom will be showing up at the Chinese Theatre as it will have a big crowd and lots of electricity.

Meanwhile, at the Chinese Theatre, Shaggy, Scooby and Scrappy watch Travolta, Streisand and Jagger walk into the theatre. The Neon Phantom then shows up and drains all the electricity. 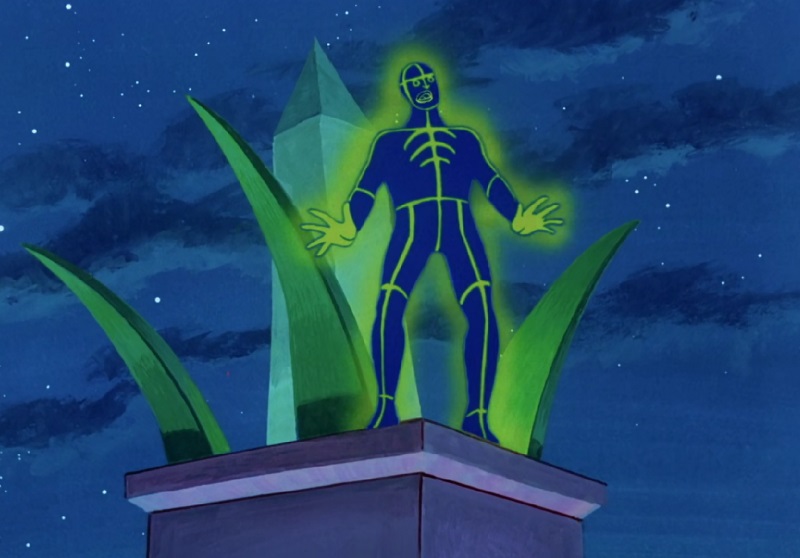 Scrappy runs to the back of the theatre where he suspects the Phantom will drop down and confronts the Neon Phantom before Scooby carries him off. A small chase occurs and they run into the rest of the gang.

Velma checks out the theatre’s electrical control panel and finds an electrical timer wired in. Velma remembers that Sparkles uses the same sort of gadgetry so they head back to Sparkles.

At the roller disco they find a circular for dimmers and neon equipment on Steve Shimmer’s desk – the words umopuns EEL is also written down on the back of the circular, which Velma figures out is a clue. 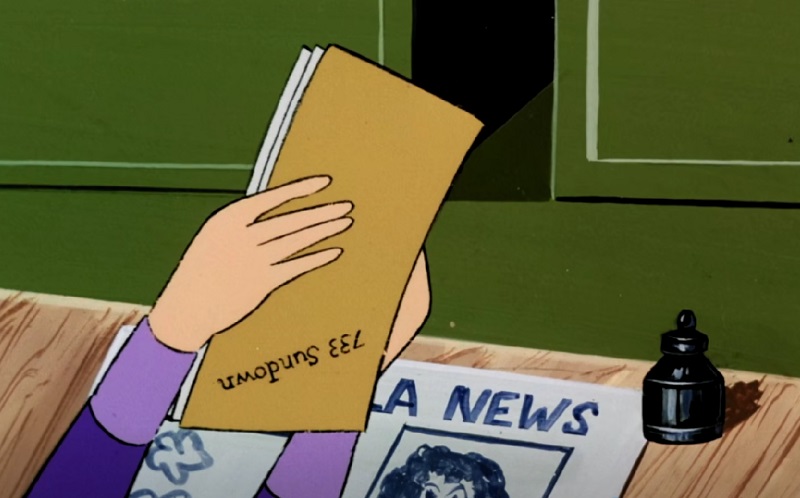 Velma sets a trap for a grand reopening of the Disco and we get a cute scene of the gang roller skating in the disco. Scooby also gets caught up in some tar on the roller derby floor – which is a bit odd. The Neon Phantom then shows up and mockingly says Grand Reopening eh? I welcome you to the Grand Closing! 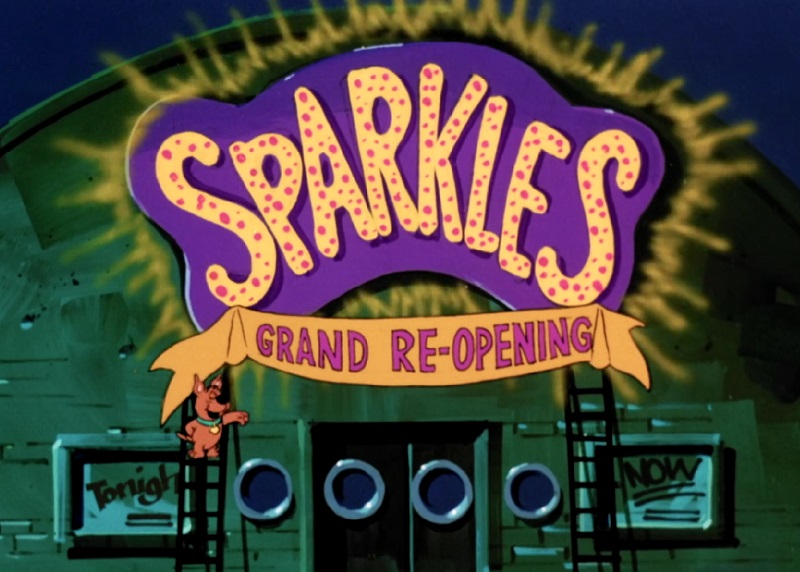 Racing outside, Scrappy, Scooby and Shaggy chase the Neon Phantom to the Hollywood Sign where the phantom turns off the lights once more. After some quick thinking Scrappy and Scooby capture the Phantom. 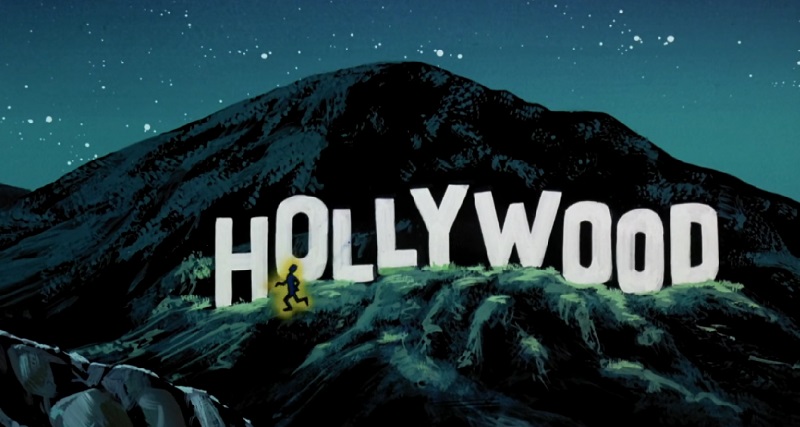 Before unmasking the Phantom they discover he has a dimmer attached to him that controls his glow. The electrical circular they found on Steve Shimmer’s desk has an advertisement for the black box controller that he wears.

Shaggy announces that it must be Steve Shimmer, but soon eats his words as Joey Cassette and Steve Shimmer show up in their jeep.

Unmasking the Phantom, it does turn out to be Mr. Bill Walker. There is tar on his boots which is from the disco roof. Joey wanted to expand his business, and Mr. Walker wanted to scare Joey off so he wouldn’t lose the house he was renting. 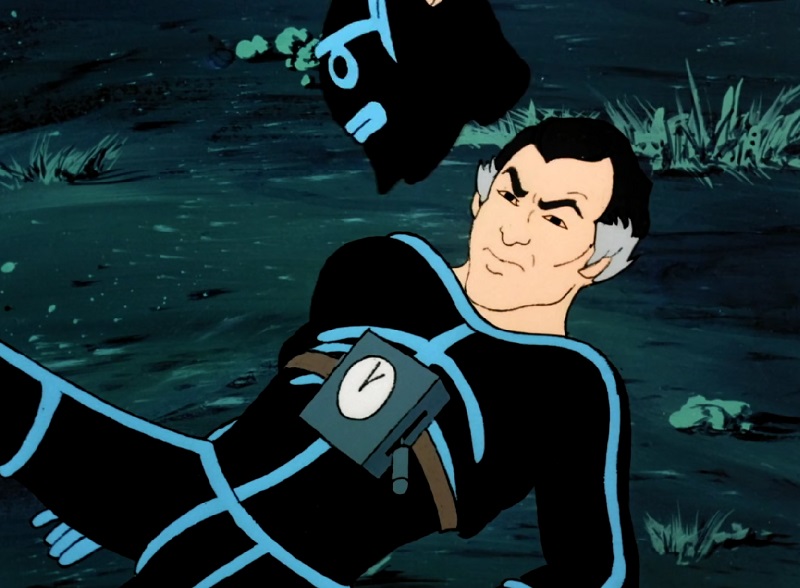 With another mystery solved the gang head off on their next adventure.

Okay, so the Neon Phantom design is a bit weak sauce and not all that memorable, so I get why many people don’t like this one.

For me, however, I loved the cultural references for a by-gone era. Roller Discos, Roller Skates, 70s Rock Bands, Neon Lights, Hollywood Films – I have such nostalgia for these things, and it’s cool to see an old episode reference what was popular at the time. It made for a fun episode. If you have no interest in this sort of thing, this one will probably rank a lot lower for you.

The mystery itself is kinda fun and decent, plus, Freddy, Velma and Daphne get some screen time in and sort of do stuff. Well… mostly Velma. Freddy and Daphne are left with little to do other than drive the Mystery Machine and bark out the odd quipp.

Anyway, join me next week when I will be covering Shiver and Shake, that Demon’s a Snake. Until then, Stay Spooky!