Shiver and Shake, That Demon’s a Snake originally aired on October 20, 1979 and is the fifth episode of the first season of Scooby and Scrappy Doo.

The episode sees the kids, on vacation in the Florida Keys where they encounter the Snake Demon shortly after Daphne had bought a cursed idol. What is up with Daphne always buying cursed things? I’m looking at you Mystery Mask Mix-Up.

Shiver and Shake, That Demon’s a Snake – Episode Review

The episode begins with a demon-like snake creature confronting a guard at a warehouse. The snake-demon scares the guard off and breaks into the warehouse stealing some silver ingots. 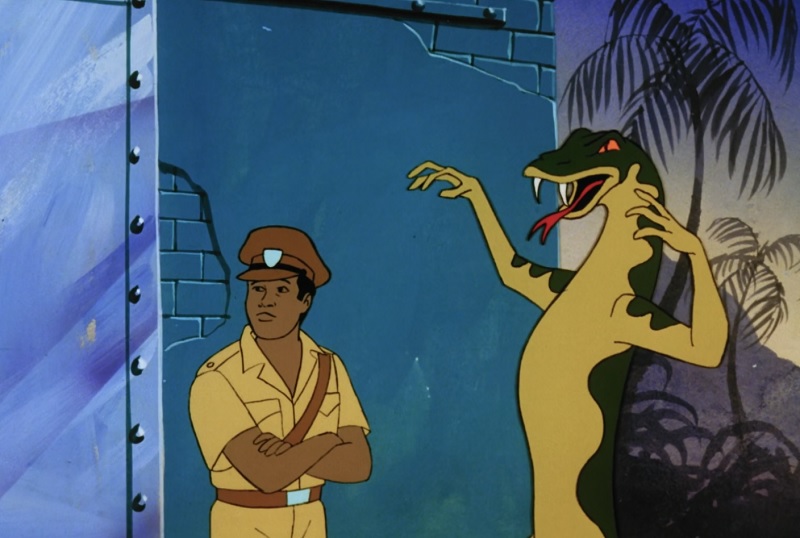 In the Florida Keys, the gang are in Haiti to enjoy some beach time. First stop up is a tour of the Hattian Bizarre by first mate Defarge. We also meet two other guests on the boat, Ms. Audry an author who is researching the Snake Demon and and Mr. Percy. 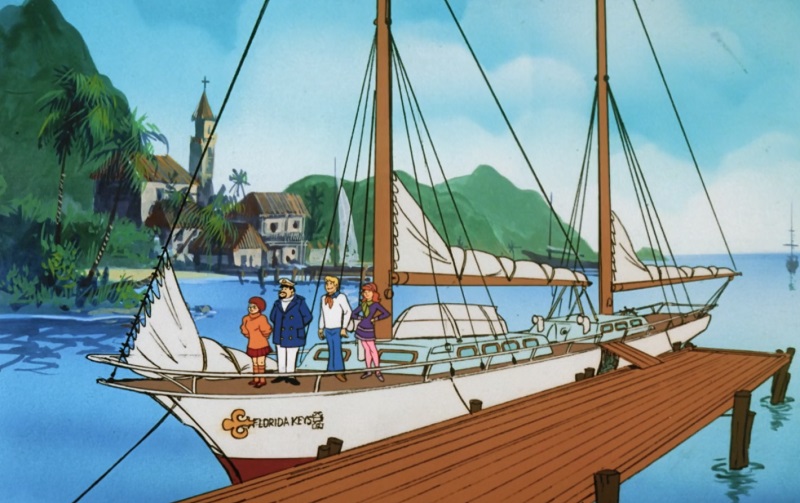 At the market the gang wander about where Daphne finds a creepy looking King Cobra statue. Shaggy also finds a skeleton key, which Ms. Audrey claims is a good luck charm against voodoo. 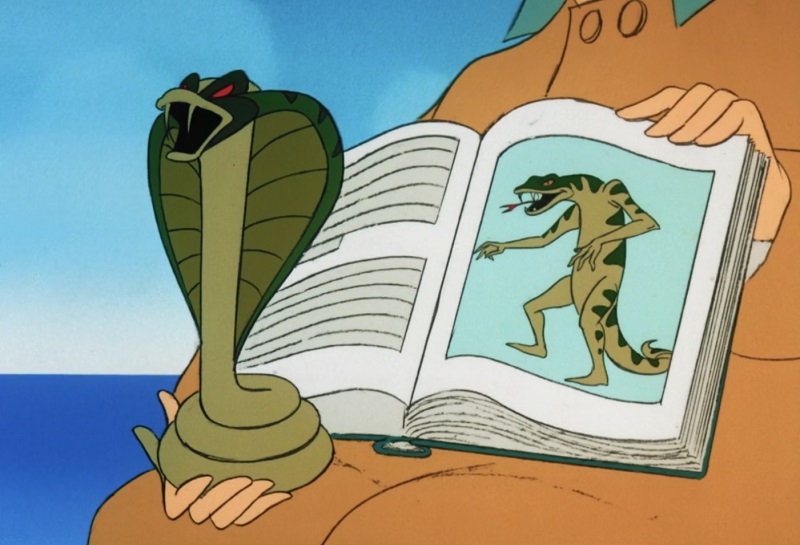 Ms. Audrey also tells Daphne that her statue is of the Snake Demon, and is cursed. Later on that evening, we see the snake demon aboard the ship and wandering about on the deck. Waking up for a midnight snack, Shaggy, Scooby and Scrappy are the first to run into the Demon snake.

Evading the snake Demon, the gang regather on the deck and discuss the events. Daphne is holding her statue, which the Snake Demon tries to steal. Fortunately Scrappy is light enough on his feet to grab it out of the Snake Demon’s arms, but unfortunately drops it in the water. 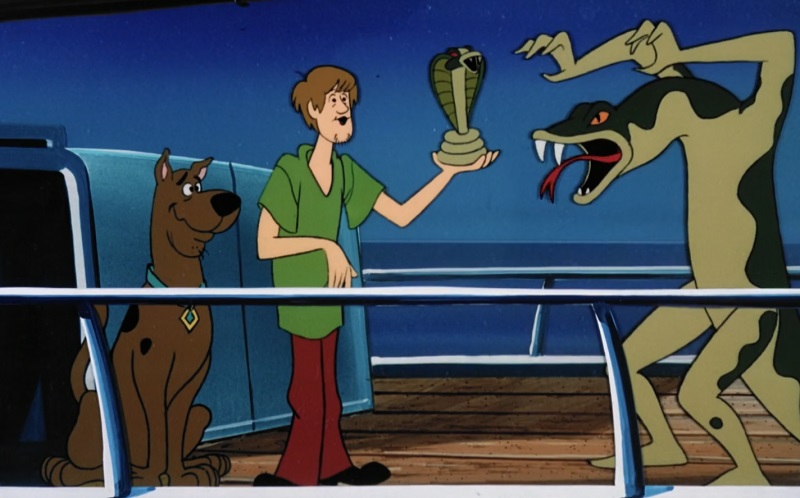 Back in Miami everyone goes off to enjoy the city, except for the gang. They stay back to search the boat for clues.

Shaggy, Scooby and Scrappy are the first to run into the Snake Demon while hanging out on the docks. Running into a shipping warehouse Scrappy gets trapped in a small shipping crate but is soon rescued by Shaggy and Scooby.

Meanwhile, back at the ship, Freddy and the girls discover the shipping hold is empty, which is exactly what Velma expected.

The touring ship continues, and Mr. Percy is worried that they are all in danger. Ms. Audrey explains they are, except for Shaggy, who is wearing his lucky key. The captain then commands Shaggy to take watch of the ship during the most dangerous hour. Seems kind of odd to pay good money for a relaxing tour and then forced to put your life on line. I’d hate to see this cruise line’s yelp reviews.

Obviously while on guard duty, Shaggy and the dogs encounter the Snake Demon who tries to steal Shaggy’s key. The snake demon is successful and after snagging the key, the demon claims to be all powerful.

Now at port in New Orleans, the gang go and watch the Mardi Gras parade. Jumping on a float, the Shaggy, Scooby and Scrappy drive off into a parade. Daphne spots some purple flowers in the water that match the float flowers, and Velma’s brilliant mind figures out that they need to stop that float. 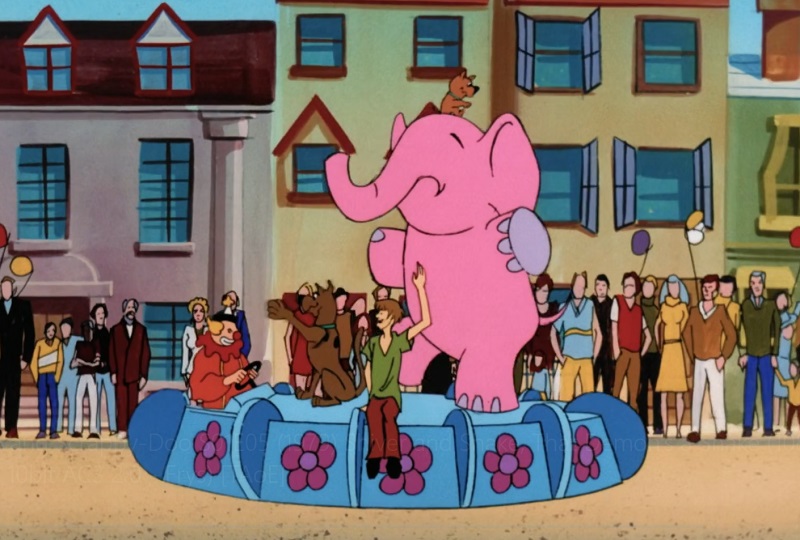 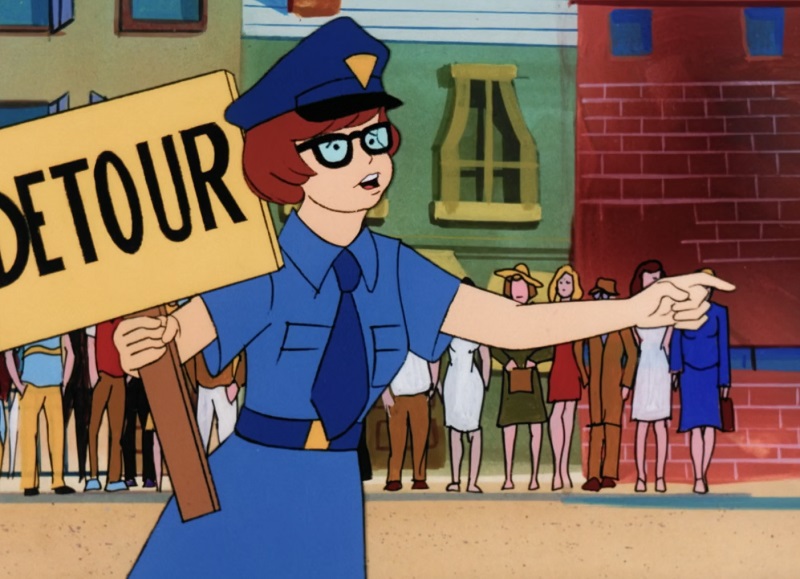 Dressed as a traffic officer, Velma directs the float and its clown driver down an alley way. The clown mask pops off and we see the creepy snake chase after Shaggy, Scrappy and Scooby.

After a few minutes of fun hijinx, the snake demon is caught and unmasked. They also find a fortune in smuggled silver ingots.

Velma explains she knew something was up as the boat’s water displacement kept changing. At the start it was weighed down meaning it was heavy, but with the cargo hold empty, nothing would have been in it. In New Orleans, the boat appeared much lighter. And given the purple flowers, the float must have pulled up to the boat and unloaded the silver.

The snake demon legend was just a ruse to scare people way and the Demon turns out to be first mate DeFarge. Velma then uses Shaggy’s key to unlock the secret cargo hold. 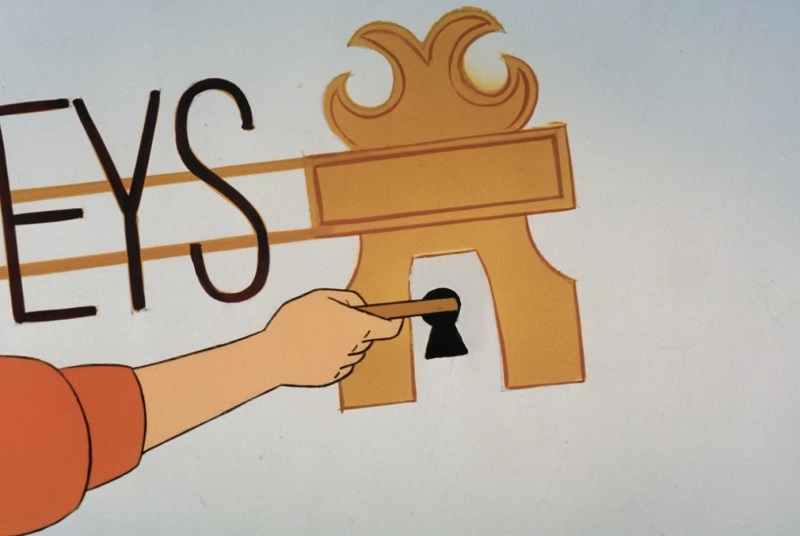 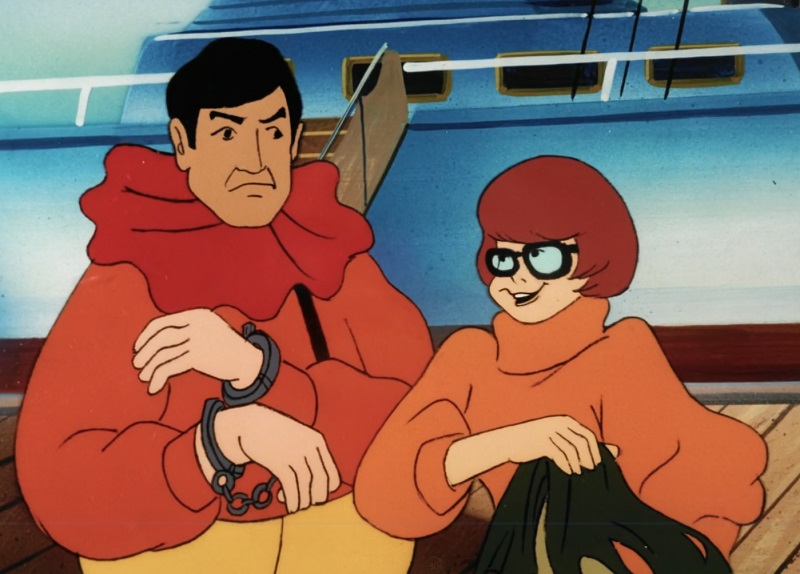 This one is a bit weak in the scares, but man, that Demon Snake Ghost Clown creeped me the heck out. And the mystery was pretty good. I was certain the Snake Demon was going to be Ms. Audrey!

Again Daphne and Freddy take a back seat to Scrappy, with Daphne only getting some screen time to buy the cursed statue and point out some purple Flowers. Freddy just fills in the gaps so Velma doesn’t do all the talking.

Overall though, an excellent episode and I really enjoyed this one.

Anyway, join me next week where I’ll be covering the Scary Sky Skeleton. Until then, Stay Spooky!

The Ransom of Scooby Chief