The Scary Sky Skeleton originally aired on October 27, 1979 and is the sixth episode of Scooby-Doo and Scrappy-Doo

The episode sees the gang on some remote land, where they are visiting Daphne’s childhood friend Wendy, who is a stunt pilot for the Sky Circus. On the way there, they discover the creepy Sky Skeleton who has scared nearly all the other pilots off just days before an annual contest.

Not much trivia here for you other than Wendy is voiced by Marla Frumkin, who would later on replace Pat Stevens as the voice of Velma for the last 5 episodes in this season.

Well anyway, enough of my jibber jabber, lets get on with the review. 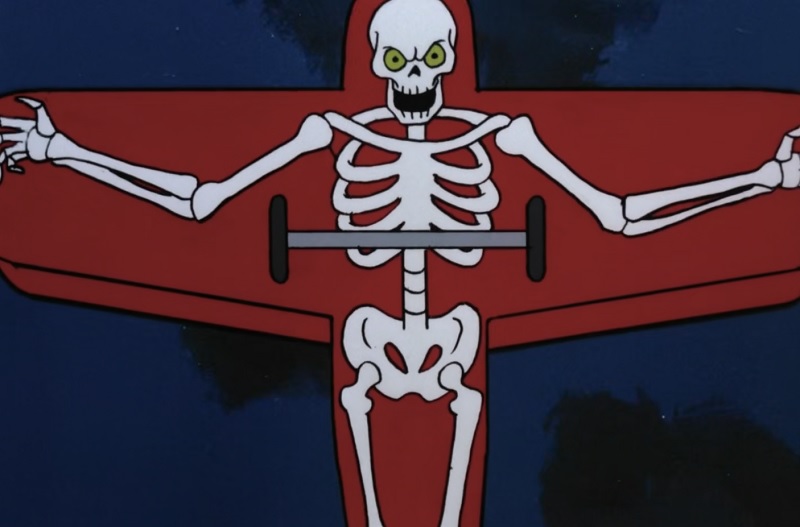 The episode begins on a full moonlight evening where we see the Scary Sky Skeleton swoop down over a field in his cool looking airplane.

On a bumpy country-side road, the gang discuss how excited Daphne is to see Wendy Aire, her best friend from childhood who has become a stunt pilot in the Sky Circus.

Up in the sky they see the sky skeleton flying his airplane and is heading toward the Sky Circus. 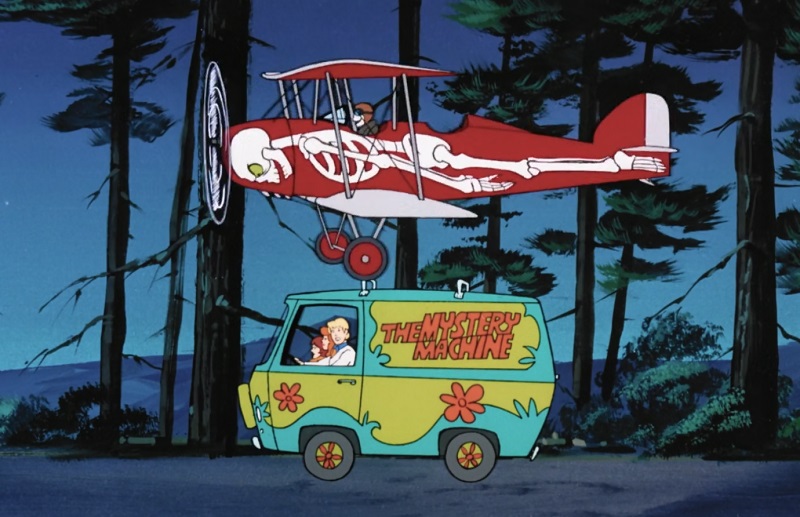 Following it, at the Sky Circus airport, the gang find it abandoned. Even Wendy is missing. The Sky Skeleton also writes a sinister message in the sky in smoke that reads “Beware! Begone! The Sky Skeleton Will Strike Again”. 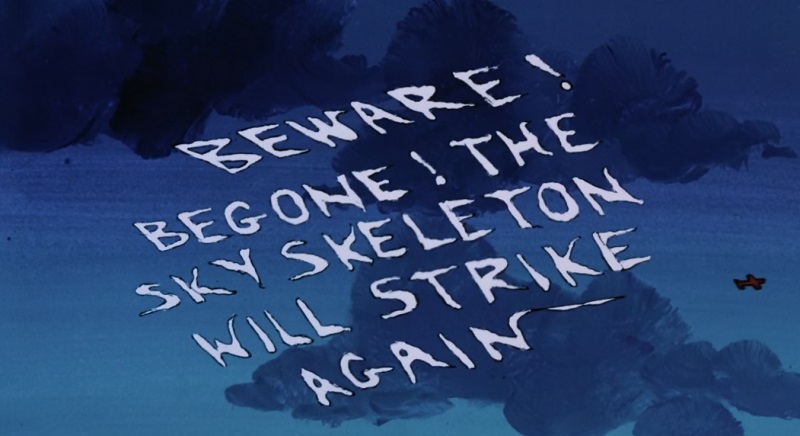 Heading up to the control tower, the gang investigate further and meet Amilia Palmer, manager of the Sky Circus and best pilot in the business. She points them off to Wendy’s bunkhouse and states that Wendy and all the other pilots are too chicken to fly up in the sky with the Sky Skeleton, unlike herself who has nerves of steel.

Heading over to the bunkhouse, the gang run into Eddie Drake, crack reporter Newsbreak Magazine. Eddie shows the gang his business card, and as he pulls it out, a handful of confetti also falls out, which Eddie says was from another story he was investigating.

Outside the bunkhouse we also meet Henry Greycloud, who says the Sky Circus has brought too much trouble to his land, along with very little money.

Wendy comes out of the bunkhouse and greets everyone. We also discover the water is super murky and muddy.

The gang go investigate for more clues at the airport hanger and discover Emilia sneaking around who claims she is securing the airplanes. Emilia also says all of this trouble only started when Wendy showed up.

The Sky Skeleton then shows up and chases after Shaggy, Scooby and Scrappy and we get a fun little chase scene that ends up with Shaggy and the dogs falling in an abandoned mine. Our trio takes a minecart ride and we cut to Freddy, Daphne and Velma. 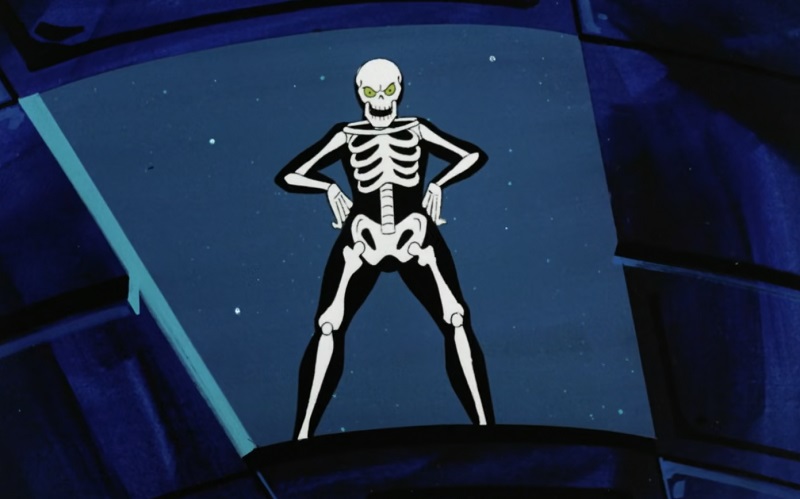 Back with Freddy and the girls, they see the Sky Skeleton up in the sky where they follow it in the Mystery Machine. Before they head off, they also have a quick chit chat with Eddie the reporter. 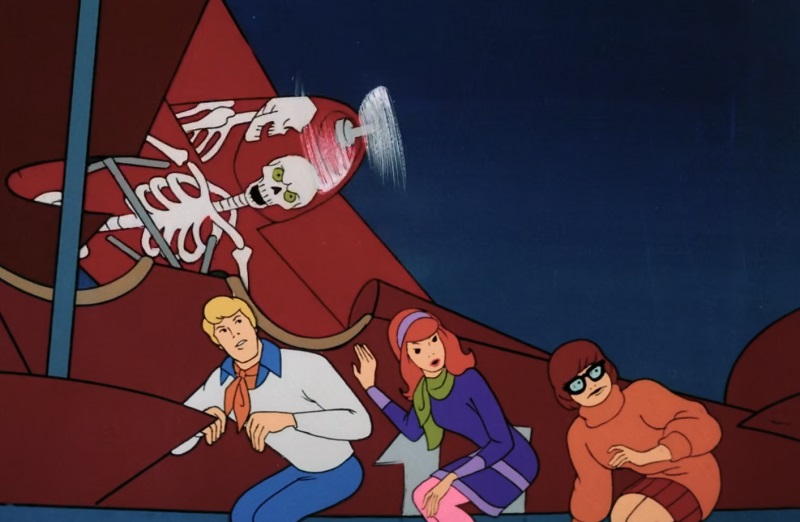 The Sky Skeleton lands at a hidden airfield, where Daphne confronts the pilot and we discover it’s a dummy made from an actual skeleton. 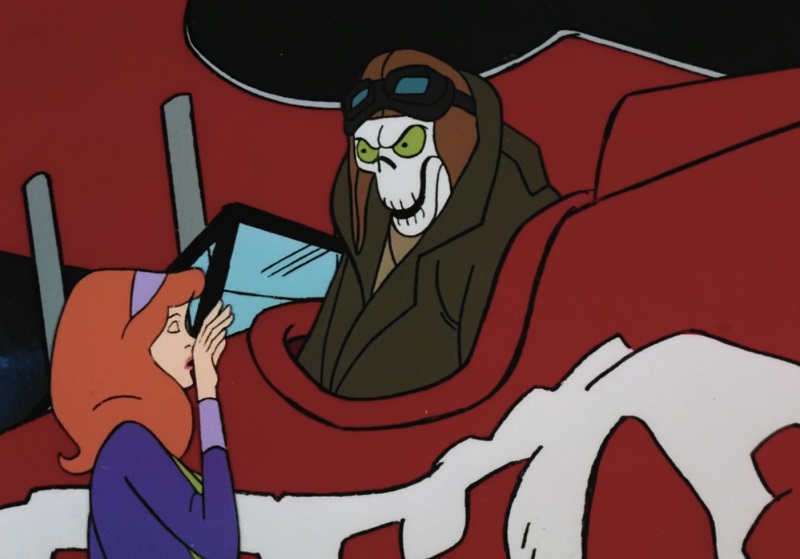 Daphne finds some computerized mining equipment which they accidentally trigger and causes the plane’s propellers to start up. Velma finds some old computer punchcards where one of the commands is Attack Sky Circus – Low Flight. 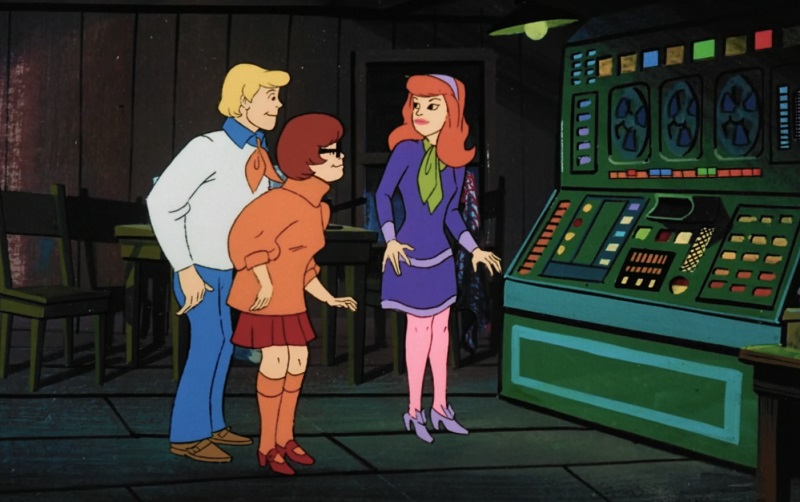 Back with Shaggy, Scooby and Scrappy, the minecart ride ends and brings them to Freddy, Daphne and Velma. Freddy also finds a map of the area which is authored by Ed Dept. 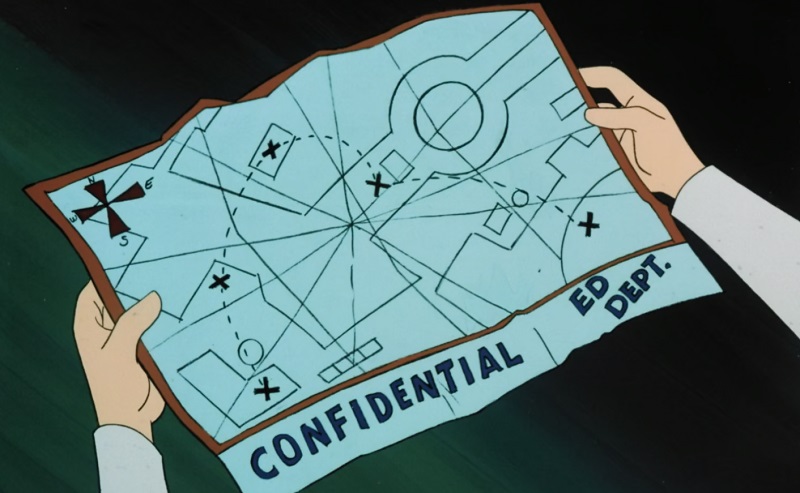 It’s now daytime, and the gang quickly chit chat with Wendy who’s headed up into the sky to practice. Unfortunately, something has gone wrong and her airplane nosedives where it nearly crashes.  Fortunately, Wendy is able to safely land it.

We then get our final chase scene between the Sky Skeleton and Scooby, Shaggy and Scrappy. It’s a bit intense as the Sky Skeleton puts the plane on autopilot, before accidentally falling off.

With the Sky Skelton caught, Velma says she was rather suspicious after finding that map which is a layout of oil under the land. Ed Dept isn’t a person, but the Editorial Department of News Break magazine.

Unmasking the Sky Skelton, it turns out to be Eddie Drake. The confetti was from the computerized punch cards. Eddie admits his crimes, which were to scare Emilia and Grey Cloud off the land. 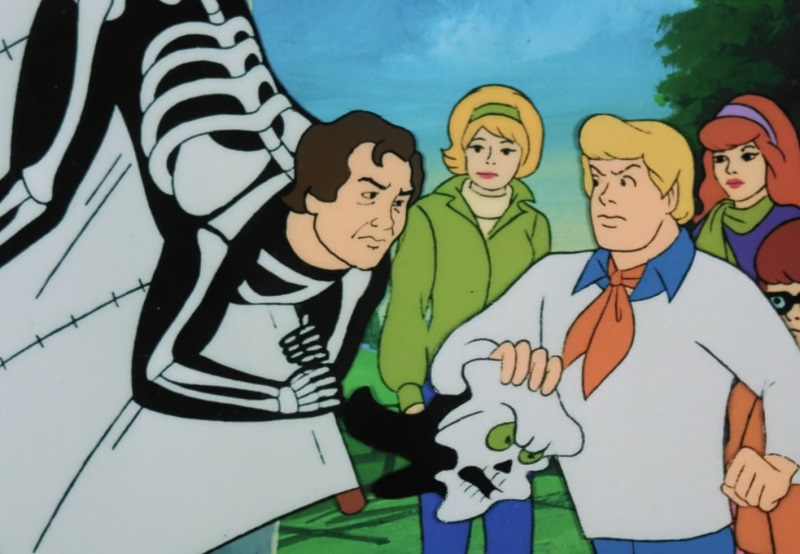 This episode, and pardon the pun, is fairly bare bones. It’s basically a stripped down Ghost of the Red Baron episode that is 95% action and 5% clues and setup.

The Sky Skeleton is cool enough, but doesn’t have all that much personality, nor does he get much screen time. I did like the fact that he was a remote controlled puppet at times, and by golly, that airplane looked cool

The episode also introduces a lot of new characters such as Eddie, Wendy, Emilia and Grey Cloud, but they’re all given very little screen time so nobody gets to shine or show much character. They’re just sorta there to do their thing and exit stage left to keep the thin plot moving along.

Still, it’s not a bad watch, but pretty forgettable with the only memorable thing is basically the air-plane design.

Well that wraps up another mystery, until next week when I will be covering the Demon of the Dugout, Stay Spooky