Lock the Door, It’s a Minotaur! originally aired on December 29, 1979 and is episode 15 of Scooby-Doo and Scrappy Doo.

This episode sees the gang up in the Greek islands where they learn the Minotaur is wandering about and scaring everyone away.

I was excited to check this episode out as it has been recommended to me several times. Plus, I enjoy Greek Mythology.

This is the last episode to fully feature Daphne, Velma and Freddy along with a traditional mystery as after this one, the franchise moves into mostly featuring Scrappy, Scooby and Shaggy for a few years. 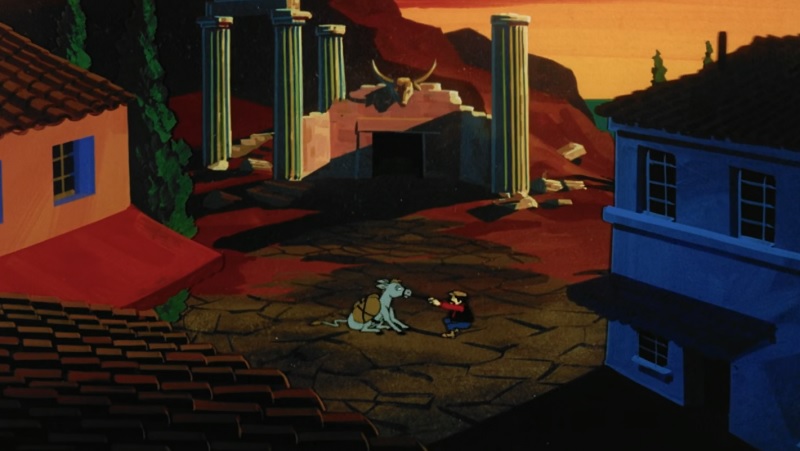 The episode begins with a man trying to get his mule inside before the sun goes down. If they don’t leave soon, the Minotaur will wake up and then there’s going to be trouble with a capital T.

The Minotaur does show up, and wow does he look menacing. He points up at the sky and says ‘I have returned to claim this island. The night belongs to me!’ 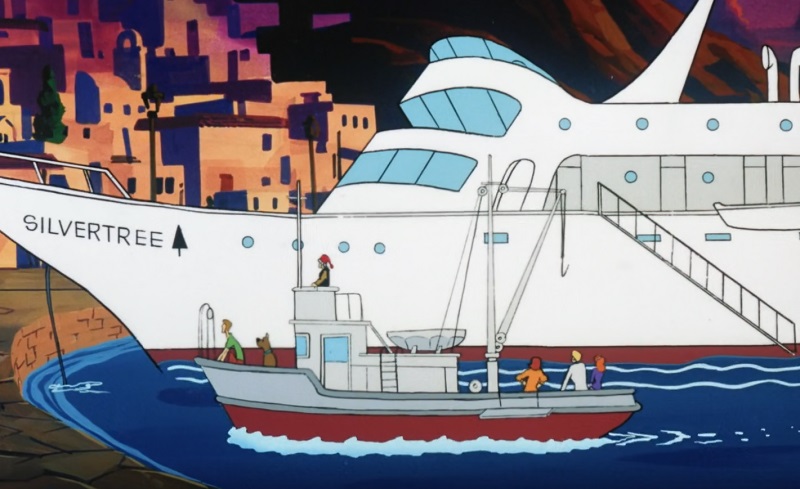 We then cut to the gang getting on the island of Helios. Shaggy notices a ginormous yacht that belongs to Lord Silvertree, who visits once a year from England.

Off in the distance, the gang see the Minotaur of Helios amongst some ruins. The Minotaur tells them to leave or meet their doom. However, the boat they arrived on has already left in a panic. 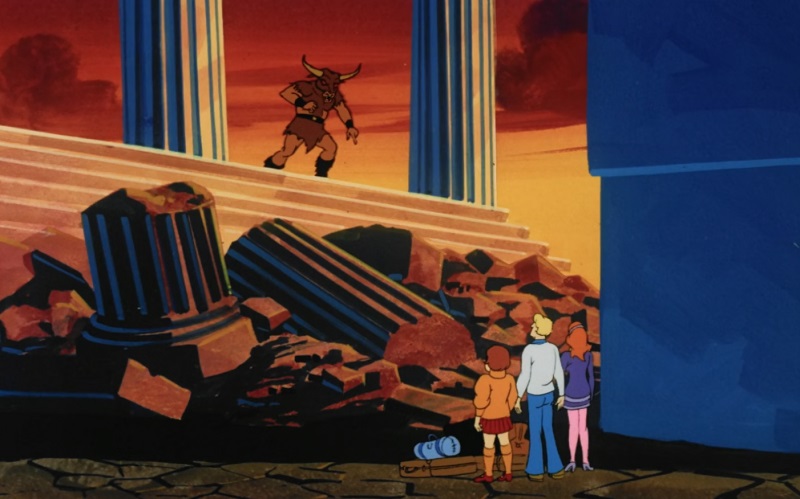 The gang walk about the town at night, and everything is quiet. All the doors and windows are shuttered and locked up due to fears of the Minotaur.

Unfortunately, it doesn’t take long for Scooby and Shaggy to run into the Minotaur who appears with a heavy bag slung across his back, much like Santa Clause. Although this Santa has horns.

Scrappy assaults a man walking with the same style of bag and spills the poor man’s olives all over the sidewalk. The man’s name is Petros Skouras. The gang also meet up with Lord Silvertree who claims he’s leaving for England in the morning, and demands more olives.

Velma tries to ask Petros some questions, but the man is too busy thanks to Scrappy making a mess. 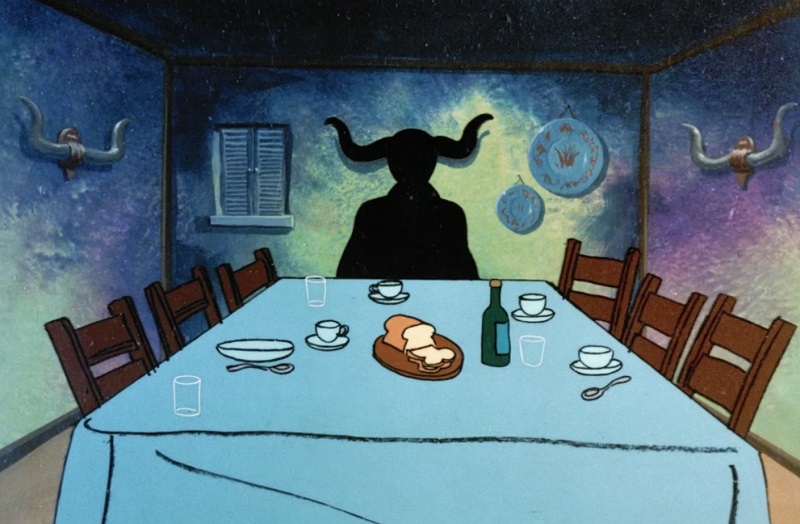 Knocking on a tavern door, Petros lets them in and they also meet Nick Papas who works on Lord Silvertree’s Yacht. Nick claims this year has been awful due to the terror of the Minotaur.

Heading off to the Minotaur’s temple, the gang run into Petros who has came to warn them about the dangerous ruins as they are the home of the Minotaur. 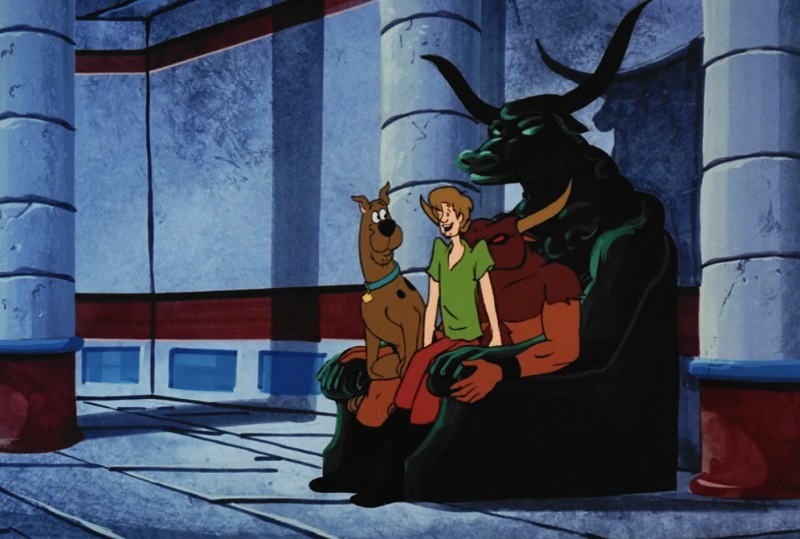 On the floor, Scrappy finds a silver coin, and shortly after Scooby and Shaggy are snagged by the Minotaur and the chase leads them to Petros olive warehouse, which is a cave that acted as a bomb shelter during the war.

The gang head back to the Taverna and Petros treats them to a dinner of stuffed grape leaves. Scrappy goes to pay with the silver coin he found, but Velma finds it odd, so they head off to the Minotaur throne. Shaggy and Scooby stay behind to pay the bill with his American Cowards Club credit card, but before he can pay, the Minotaur barges in. 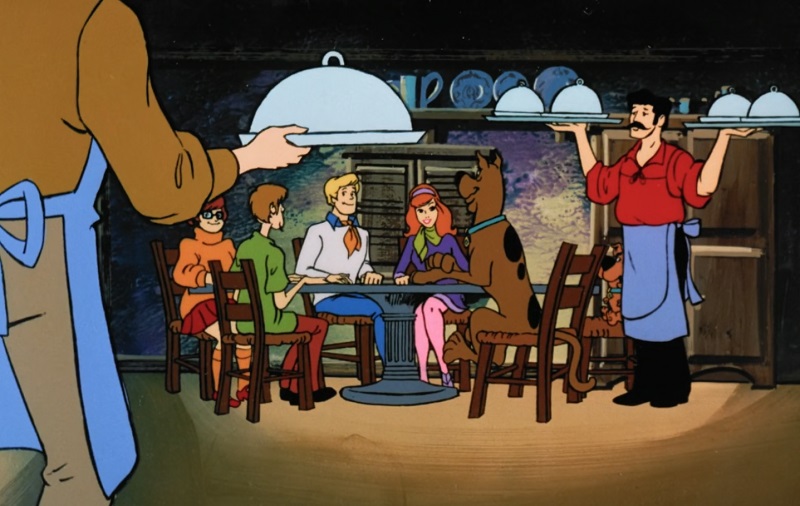 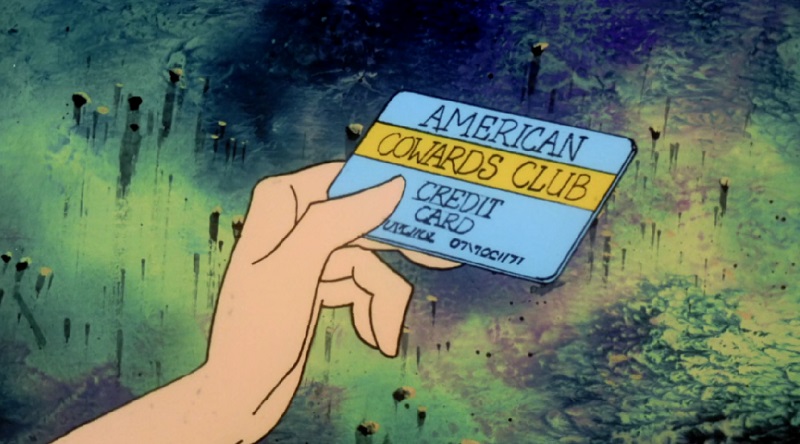 Freddy finds a secret opening where they find a painted piece of tapestry amongst the room full of olives. Velma has now figured out the mystery and everyone heads to the docks.

Scrappy finds the Minotaur’s sack and we get another chase scene that continues until the Minotaur is caught. 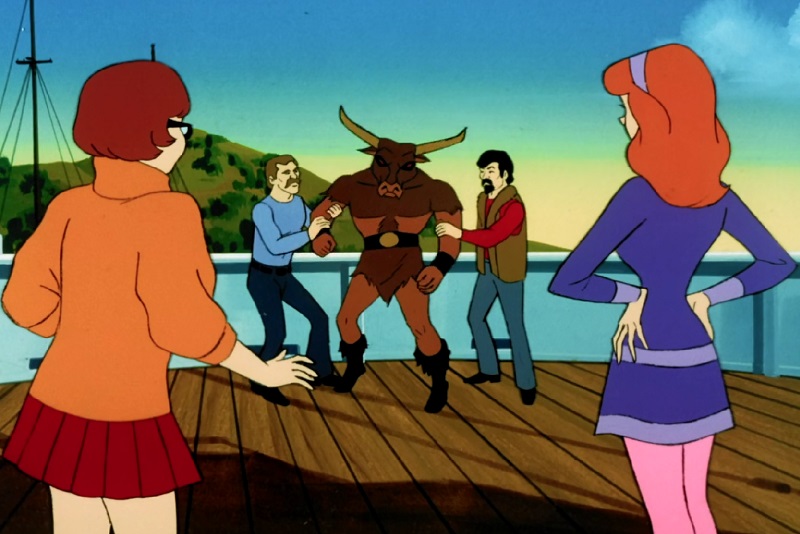 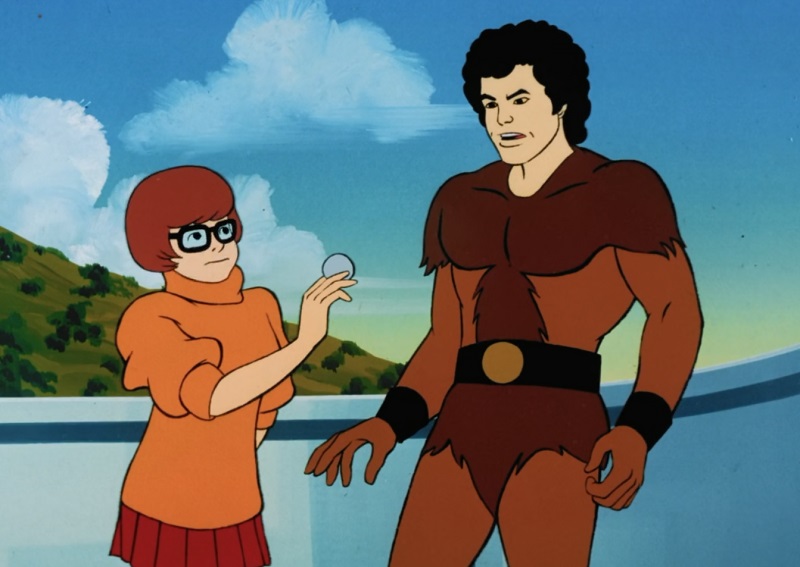 Unmasking the Minotaur, it turns out to be Nick Papas. As an art student he had recognized the value of the artifacts. The piece of silver Scrappy found was a piece of Nick’s belt.

I thought this one was pretty cool with how it took place in Greece and involved Greek mythology. The mystery was also interesting, and I never would have guessed it was Nick. I thought it was Lord Silvertree the entire time as he was so mean.

The minotaur looks cool, and the underground labyrinth is a lot of fun. I enjoyed how this took place at night where everything was locked up.
Marla’s Velma portrayal was a little bit better in this one. I’m not sure if I had gotten used to it after three episodes, or she had warmed up to the role. I still don’t like it, but it didn’t pull me out of episodes like it had previously.

The Greek voices didn’t impress me all that much though. Everything sounded more or less Romanian to me than Greek. However, my only exposure to Greek accents comes from movies and Gyro restaurants. So what do I know.

Only one episode left from this season from me to review and then it’s just going to be Scrappy and the boys for a bit until Daphne hooks back up with everyone. Man, my views are going to plummet! Oh well, I’m not here to be famous – I just want to review every Scooby-Doo episode ever.

Anyway, join me next week when I will be covering The Ransom of Scooby Chief. Until then, Stay Spooky!

Shiver and Shake, That Demon’s a Snake