The Ghoul, the Bat and the Ugly originally aired on December 8, 1979 and is episode 12 of Scooby-Doo and Scrappy-Doo

This episode sees the gang attending the Batty Awards where they encounter the Shadow Creature – a monster who is featured in a horror movie that is set to be premiered the following year.

Not much trivia for this one other than it’s Marla Frumkin’s first portrayal of Velma. Anyway, enough of my jibber jabber, let’s get on with the review.

The Ghoul, the Bat and the Ugly – Episode Review

The episode begins with a ceremony celebrating the best of horror in film. All of the guests are dressed up and we get some clever takes on Mr. Hyde, the San Francisco Demon and the classic Zombie.

Best actor in a horror Film goes to Judson Carr before presenter Brandon Davies is about to show the film ‘The Curse of the Shadow Creature’ which is set to premier next year.

When the film starts, the audience goes wild, that is until the actual Shadow Creature shows up and frightens everyone away.

In the Mystery Machine, the gang are running late on their way to the Batty Awards. I also got to say, the change in Velma voice actors is quite noticeable as well – at least to my ears. This Velma has a much deeper voice and maybe a bit of a new England accent.

As they approach Hillside Manor where the awards are happening, they watch as the costumed audience of monster race out of the award show.

Mr. Davies explains what has happened and Velma asks if they can look around. Freddy and the girls head to the projection room where the movie preview has been cut up. 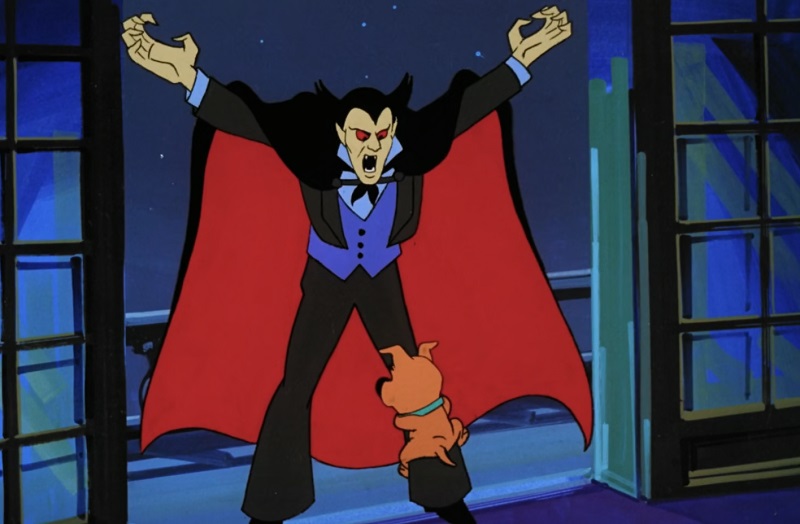 Scrappy attacks a man dressed as Dracula, who turns out to be the famous actor Creighton Aimes who is quite angry for not winning the best actor award for the past 3 years in a row.

In the lobby, Freddy, Daphne and Velma are the first to run into the Shadow Creature who makes a mess out of the lobby display. In the mess of things, Velma discovers a news report on the back of the ad for the award show that explains that some priceless stamps were stolen. 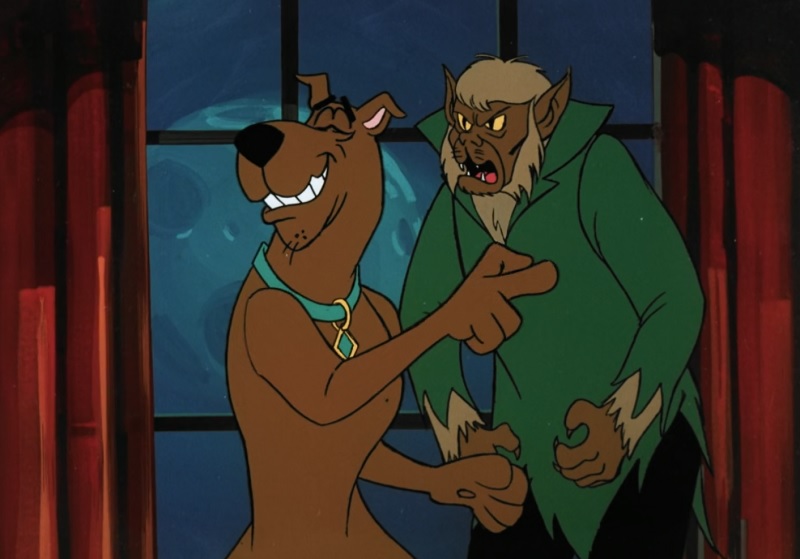 Shaggy, Scooby and Scrappy run into a wolfman while looking for the kitchen, which turns out to be Harrison Stone who was one of the founders of the Batty Awards, but formed his own award show after having a disagreement with Brandon Davies.

Harrison came by to patch things up with Brandon, and was dressed as a wolfman to scare away the Shadow Creature. Before Harrison heads off to find Brandon, Shaggy hands Harrison some letters he found to give to Brandon. Velma inspects the letters and notes none of them are addressed to Mr. Davies. 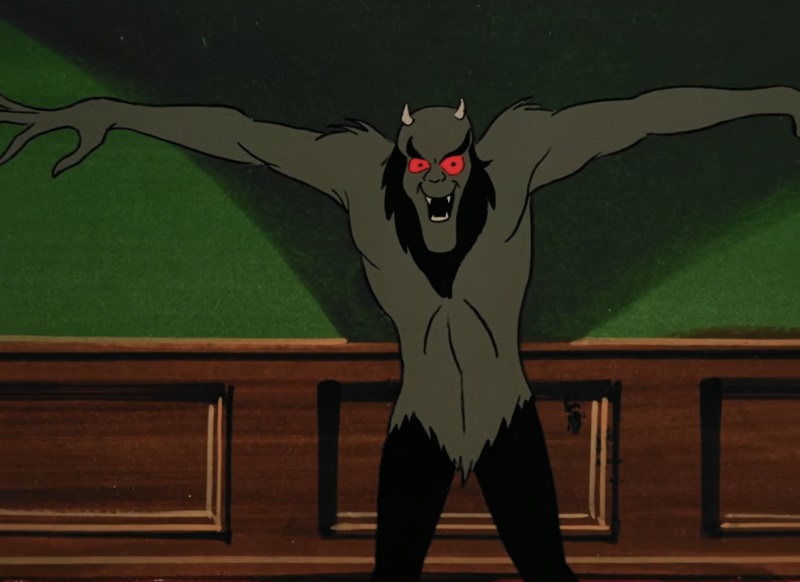 In the Kitchen Shaggy, Scooby and Scrappy finally run into the Shadow Creature and we get a longer chase scene full of hijinx and gags.

Scrappy thinks he’s caught the Shadow Creature but it turns out to be Creighton Aimes who is convinced that Brandon Davies was accepting bribes for who the best actor was. Brandon says if he was really that broke he wouldn’t be able to live in this huge house of his.

Scrappy, Shaggy and Scooby run into the Bride of Frankenstein who turns out to be Doloris Canfield who wants Brandon Davies to sell the house to turn it into a shopping centre. Apparently Brandon approached Doloris first but has changed his mind.

Velma loads up a projector and finds an image of Brandon Davies at a location shot. Figuring out the mystery, it’s now a race to find Shaggy, Scooby and Scrappy to get the envelopes back.

Shaggy, Scrappy and Scooby have their last run in with the Shadow creature and finally end up capturing him with the help of a secret library door.

Unmasking the Shadow Creature it turns out to be Brandon Davies who was seen in the film leaving the stamp shop. He was stealing the stamps to sell them to afford his home.

It’s a pretty cool episode and it’s a lot of fun, but it’s not all that memorable either.

I loved the setting, and I loved all the suspects as they had some fun screen time dressed up in their costumes, plus they had clever motives. However, the entire mystery itself is not well written. The whole thing about selling stamps to afford his home seems incredibly silly. I think the writers knew this as during the reveal they wrap things up super quick.

I also had issues with Velma’s voice. Marla does her best, but it does not match Velma at all and it pulled me out of the episode every time she talked.

The intro was my favourite part, and watching all the guests dressed as their favourite monsters run out of the mansion, scaring the heck out of Scooby and Shaggy in the process.

The shadow creature design was cool, but also somewhat generic and is somewhat forgettable. So I didn’t love that either. As this is the 101th episode of Scooby-Doo, that is understandable, as how many cool monster concepts can you come up with.

If this one had a better mystery, and perhaps a more interesting backstory for the villain, it would be a 10 out of 10 for sure. Still, it’s totally watchable, and a lot of fun to watch at that.

This is my last review for a bit, more to come eventually (and this one is showing up late as I forgot to schedule it) – until next time, Stay Spooky!