The Exterminator is episode 5 of Season 2 of the New Scooby Doo Movies and originally aired on October 6, 1973.

The episode guest stars Don Adams, who’s most famous for his role on Get Smart and as the 80s Inspector Gadget.

Here we see the gang in Hollywood, where they are hired by Don to work as insect exterminators for the famous movie actor Loren Chumly the man of a million faces. Loren Chumly is of course a take on Lon Chaney, the man of a 1000 faces who is most famous as the silent film actor in Phantom of the Opera. His son, Lon Chaney Jr. also saw fame in the Universal film ‘the wolfman’.

With the promise of some old fashioned gothic horror, will I enjoy this episode? Let’s find out!

The episode begins with the gang driving through Hollywood and looking at celebrity homes. We get some nice fake takes on celebrities such as Gregory Grant and Steve McKing.

The gang then spot Don Adams stuck on the side of the road in his Adams Exterminator co truck. Don has a side hustle as an exterminator. Don has no car, and is running late to exterminate a house.

The gang volunteer to help, and they drive Don to the house in the Mystery Machine. Don hires the gang as his assistant, and the gang accepts. As they pull up , we learn the house is ‘Horror Hill’ and belongs to Loren Chumley the famous horror movie star, and Shaggy is not impressed.

Knocking on the door we meet the butler, named Otto, who lets Don and the gang in. Don also explains to the gang that the bank is selling this house and hired Don to get rid of all the bugs.

Daphne is happy to be inside a Hollywood home and the gang marvel at all the quirky decorations. As they walk about, lots of weird things happen that Shaggy fears are ghosts, however, Don explains it is probably just termites.

Before they set off on their extermination gig, Otto warns them to tread carefully as the house is full of unspeakable terror. Shaggy and Scooby find this out pretty fast as a portrait comes to life and gives them a scare. This portrait sure looks like Swampy Pete, who we saw in the first Harlem Globetrotters episode called the Ghostly Creep From the Deep. Running to hide, they soon run into a werewolf and Frankenstein Monster that are quite similar to the werewolf from A Gaggle of Galloping Ghosts.

Otto once again tells them that strangers are not welcome, and he can not be responsible for the consequences that will occur if they stay.

The gang continues to spray down the house, and we get plenty of gags of the gang encountering several haunted props and sinister figures. Several portraits continue to come to life, and we get some spooky encounters with Mr. Hyde and Frankenstein’s monster. 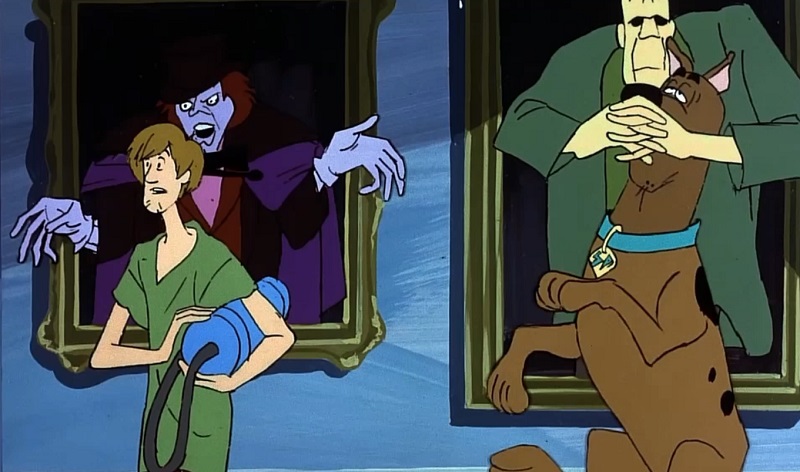 About halfway through the episode, we learn Otto is in cahoots with a sinister looking man who is purposely haunting the house.

The two men get back to their haunting, and we get a funny scene where one of them dresses up as an exterminator and joins the gang in spraying the house down for bugs.

Another fun scene happens in the pool room, where we get a fun nod to the Creature from the Black Lagoon. 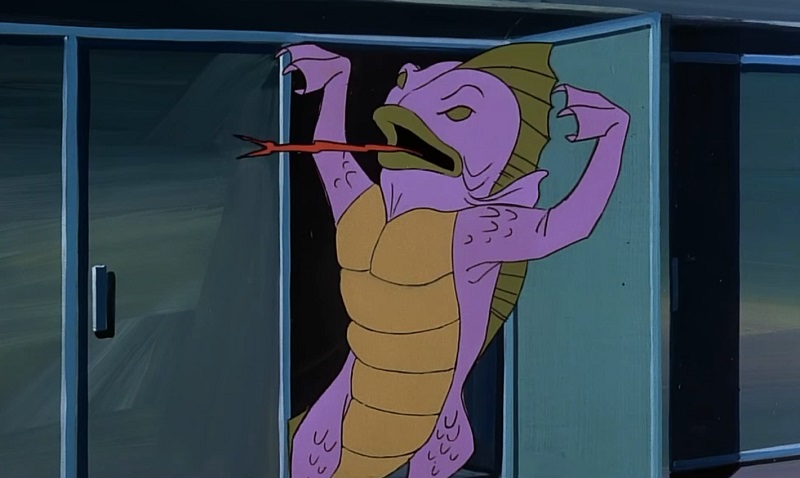 The gang reunite in the projection room but are soon chased out by a haunted popcorn machine and dozens of bats. They then run into an elevator which carries them to Loren Chumley’s theatrical storeroom. Up there, they find the missing exterminator equipment that had gone missing.

After a few more haunted experiences we soon see Otto directing Mr. Chumley as a werewolf like cat creature. It turns out they are trying to get a comeback going for Loren Chumley, and they have been secretly been recording a movie so he can get some money to buy his house back from the bank. 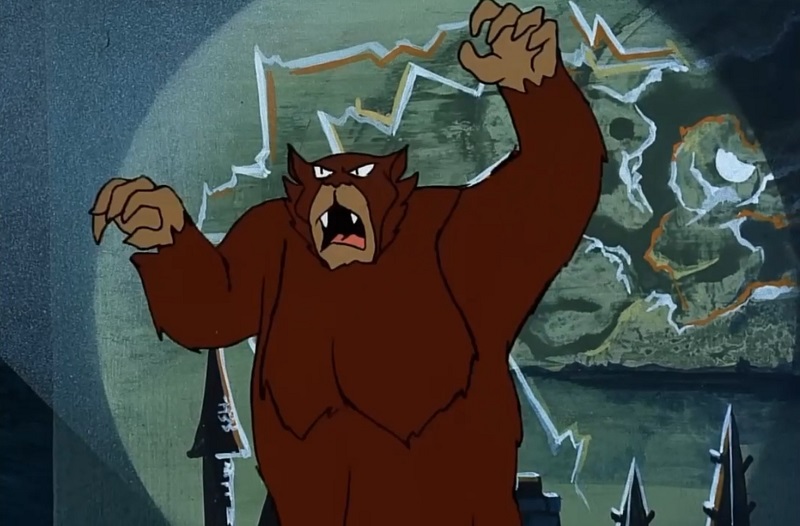 Scooby and Shaggy are unaware of this, and accidentally trap Otto and Chumley. Don unmasked Chumley who is wearing a few masks, and Chumley reveals that he was trying to scare the exterminators off as there was a clause in the agreement that the house needed to be sprayed down before it can be sold.

Instead of exterminating the house, the gang volunteers to help finish Chumley’s movie.

I give this episode a 6.5 out of 10. I liked this one a lot, but it’s also incredibly padded and not much actually happens. I do feel it has some good atmosphere with the creepy old house, and I appreciate the nod to classic horror films from the silent era.

Don made for a good guest, and throws himself into the role as an exterminator. I thought it was funny he was always spraying toxic chemicals on everyone and launching bug bombs about. Please kids, in real life, do not inhale bug killer spray.

I enjoyed the juxtaposition of Don thinking all the troubles were due to termites and Shaggy and Scooby blaming everything on ghosts.

While this is one of my favourite episodes, it’s also quite lackluster in terms of chills and spookiness. I would have loved to have seen them do more with the scares and fights.