The Weird Winds of Winona is the 6th episode of the second season of the New Scooby-Doo movies and originally aired on October 13, 1973.

Here we see the gang investigating some mysterious winds in the ghost town of Winona along with their newly made pals of the Speed Buggy crew, which consist of Tinker, Speedy Buggy’s mechanic, Debbie, a female teenager, and Mark, the brains of the group.

Speed Buggy was a cartoon that ran alongside the new Scooby-Doo movies in 1973 and only lasted one season. Mel Blanc is of course famous for voicing Bugs Bunny, Daffy Duck, Porky Pig, Tweety, Yosemite Sam, Sylvester and Captain Caveman.

I really wish Speed Buggy ran for more seasons than just one as it seemed like a lot of fun. From what I remember of the original series, Speed Buggy and his crew would travel the world to enter races, but also encounter evil crooks along the way. Speed Buggy seemed like a cool take on Disney’s Herbie the Love Bug.

The episode begins with the gang driving through some farm country on their way to Winona. There, they plan to see the Oceanside Auto Rally where Speed Buggy is a special guest. Fred can hardly wait to see that little car in action.

We then cut to Speed Buggy and the gang, and we are introduced to his team of Tinker, Debbie, and Mark.

Back to Mystery Machine, we now see the gang entering Winona where the original population of 627 is down to 10 people, according to the welcome sign. 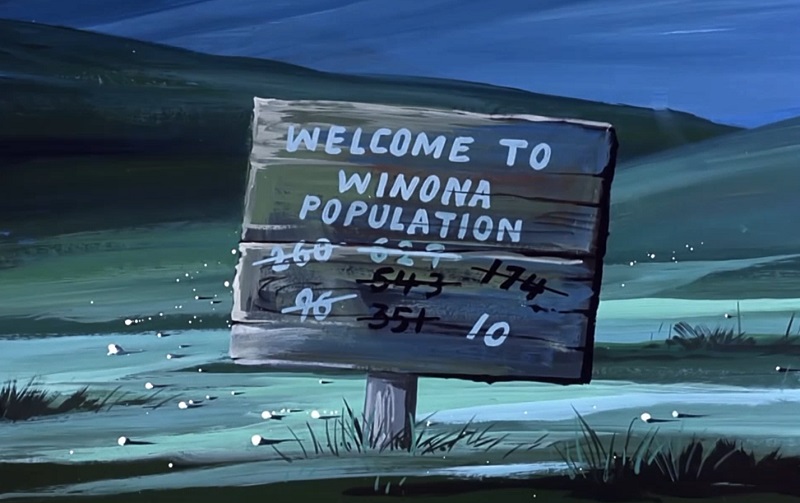 At a boarded up hotel we see that it, and the whole town is out of business. So the boys camp outside the Mystery Machine, while the girls sleep inside.

The gang are woken up at the stroke of midnight by some heavy winds, and don’t sleep a wink all night.

The daytime is nice at least and the gang pack up their supplies and roll out. While they depart, the gang almost hit Speed Buggy and the two groups meet. Both gangs recognize one another and the gang decide to travel to the Oceanside Car Rally together.

On the way there, Freddy hits a truck backing out of his farm and there is a minor fender bender, with the Mystery Machine getting the worst of the damage. The farmer, named Clem Duncan, who caused the accident, offers shelter in his barn to the gang while Tinker fixes up the Mystery Machine. 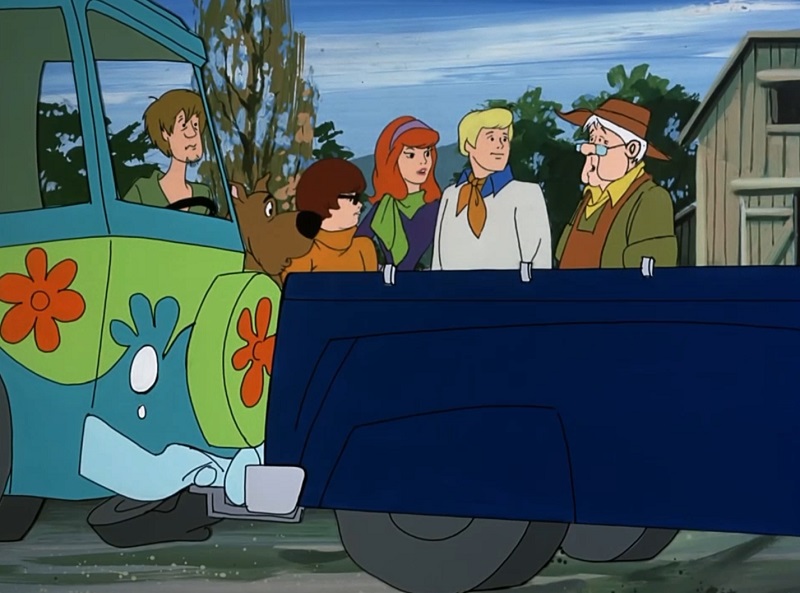 Unfortunately Tinker says it will take a few days, and they’ll have to miss the race. Because they’ll be there a few days, the girls can sleep in the house while the boys can rest up in the barn.

Mr. Duncan explains the strange winds have been occurring for two months now and have scared off most of the population.

Since the two gangs will be spending the night, they decide they’ll figure out the source of the winds when they strike the town at midnight.

Midnight strikes and so do the weird winds, so the gang head out into the ghost town to explore what’s going on. Heading through an old cemetery, they head to an old church where a bell is being pulled. They figure someone must be pulling the bell at midnight, and since when it strikes the winds start up, they’ll be able to figure out this mystery. 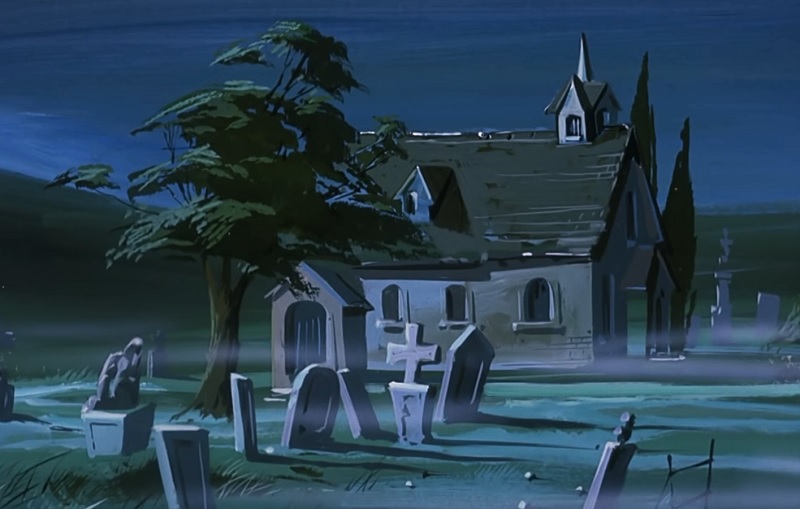 Inside the church, the gang do not find anyone, however a mysterious figure causes some haunted shenanigans that scares everyone away.

Exploring the town once more, the gang see a shadowy figure and chase him into a clothing store. The creepy figure hides behind several mannequins and more hijinks occur.

With an unsuccessful night of ghost hunting, the gang head back to the barn and try to get a good night’s rest. They are woken up pretty early as Tinker hammers out the Mystery Machine bumper as he wants to get out before spending one more night in this haunted town.

Mr. Duncan cooks everyone up some pancakes, and afterwards Debbie, Velma and Daphne decide to head to the village in Speed Buggy. Shaggy and Scooby tag along as the town feels safe in daylight.

In town, they find the bank is still open. There they meet the bank owner named Mr. Peabody. Inside his office they hear a weird wind in his bank vault see money blowing around inside. The gang then leave thinking they’ve found no clues.

Fortunately, they come across the Winona Hall of Records. One of the town’s ghosts causes trouble for the gang and locks Scooby and Shaggy in room. Unable to find our cowardly duo, Debbie rushes back to town in Speedy Buggy to get the boys help in finding Scooby and Shaggy.

With the Mystery Machine fixed, everyone is now back at the Hall of Records and Speed Buggy uses his hot exhaust to melt the lock on the door that Shaggy and Scooby are locked behind. They also find an old parchment map of the whole area.

On the map they discover a cave system under the mountain, and Freddy concludes that maybe the winds are coming through those caves. They then decide to explore the caves for further clues.

The trip to the caves is rather treacherous, but the gang finally make it to a cave entrance.

At the caves they don’t hear any wind, but they are stalked by a mysterious hooded figure that creates a few frights.

The hooded figures start up the wild winds which causes a lot of difficulty as the gang try to navigate the caves. The wind eventually blows them around and into a room where they are locked inside by the mysterious hooded figures.

Speed Buggy uses his wheels to dig through the cave wall and they enter a room with a giant wind machine, which is basically an airplane without any wings. The powerful propellers can cause hurricane-like conditions inside the cave system.

As the gang try to leave the caves, we then find four hooded men playing cards in the cave. Discovered, the four men take chase, however, the Speed Buggy and Scooby-Doo crew use their heads to trap all four of the hooded men. 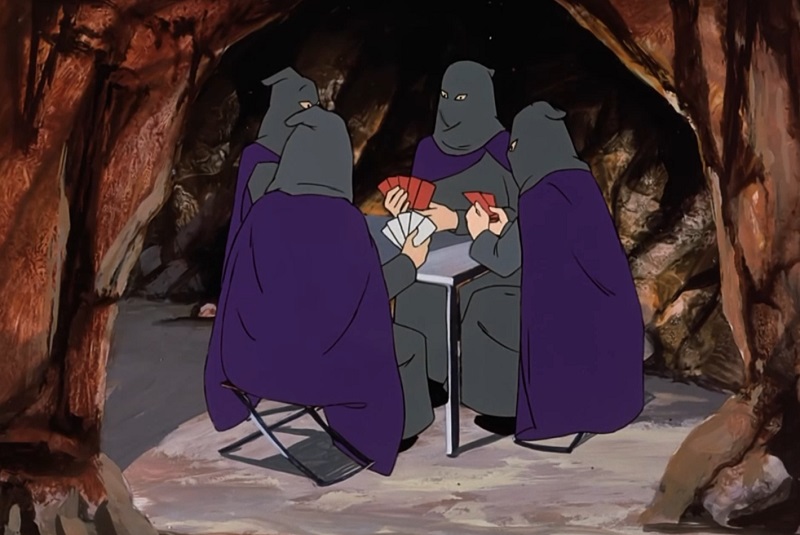 Fed up with the wild winds Mark tunnels an exit out of the cave with the wind machine and drives it into the ocean.

The sheriff and Mr. Duncan see the gang drive out of the tunnel and the two gangs present the trapped hooded figures to the Sheriff. Scooby and Shaggy also drag out a scale model of the town, where they see that a hotel is now on Mr. Duncan’s property.

They figured out pretty fast that the ghosts were trying to scare everyone out of town so they could buy the property cheap and turn it into a resort. On the back of the map they see the words P.J Peabody Development Co.

Mr. Peabody, the bank manager then rips off his mask and runs off. There’s a bit of an animation mistake as there are still four cloaked me still tied up, but there should only be 3. 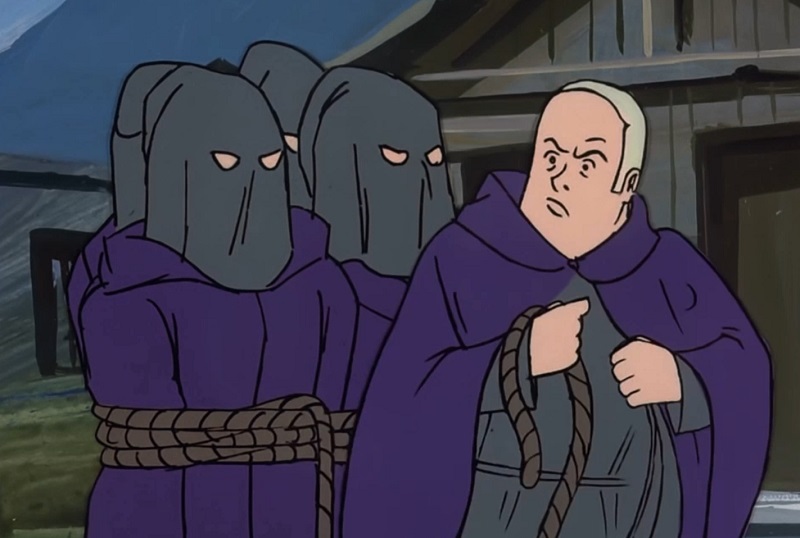 Unfortunately for Mr. Peabody, Speed Buggy is much faster and catches the villain.

With another mystery solved, the two gangs head off to the race, as they should have just enough time to make it there.

I really enjoyed the interaction between the Gang and the Speed Buggy crew and I felt it added a lot of value to the episode.

Unfortunately the bad guys were a bit of a disappointment and we don’t see much in the way of interaction between the hooded figures and the gang until the very end. All we really see are some mediocre haunted spooks that aren’t very effective.

Still, the atmosphere is spooky with the mysterious winds, and there was enough to keep me intrigued. Both the haunted town and caves also made for a nice little adventure.

Next week we are covering the Haunted Candy Factory.