Mystery in Persia is episode 3 of the second season of the New Scooby-Doo movies and originally aired on September 22, 1973. Here we see the gang teaming up with Jeanie from the popular television show I dream of Jeanie.

In this version, however, we get the Hanna Barbera version of Jeanie, along with her klutzy genie sidekick Babu, her new Master Corey, and his cowardly pal Henry. The animated I dream of Jeannie series called Jeanie ran for one season before Jeannie and Babu later appeared on this episode. The series, while produced by Hanna Barbera, was owned by Columbia pictures.

Corey is voiced by a young Mark Hamill, so that’s pretty cool. Mark Hamill, of course, would later see fame as Luke Skywalker, and later on as the voice the Joker in the Batman Animated series.

Babu is voiced by Joe Besser, who was briefly a member of the 3 stooges from 1957-1959. Babu would later on be featured in the Laff-A-Lympics as part of the Scooby-Doobies. Jeanie, didn’t make the cut due to legal issues with Columbia Pictures Television who aired I Dream of Jeannie

And this is the first episode to feature real supernatural beings like Genies and Jinns.  It’s also the gang’s first adventure outside of the United States.

The episode begins with the gang driving in the Mystery Machine down a deserted stretch of road. For once, they have a full tank of glass, however, Shaggy and Scooby are hungry. 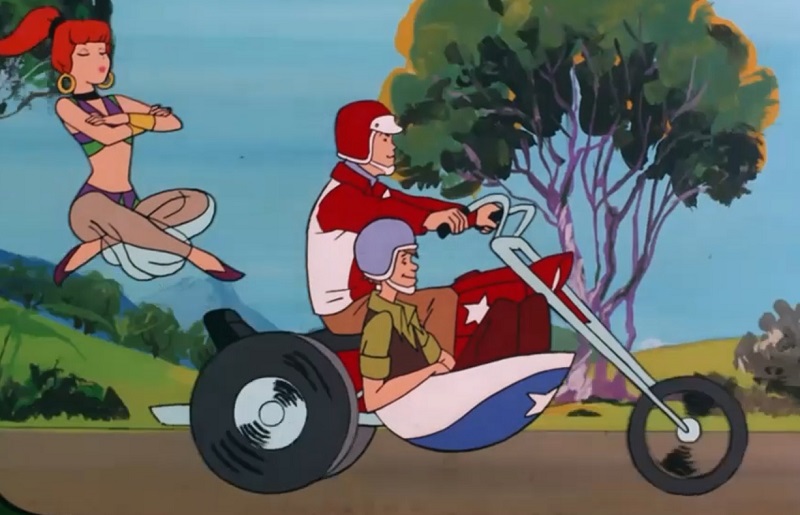 While driving, they see a really cool motorcycle, driven by Corey and Henry, as well as a Jeanie the Genie. The sight causes Freddy to drive off the road and they get stuck in the mud. 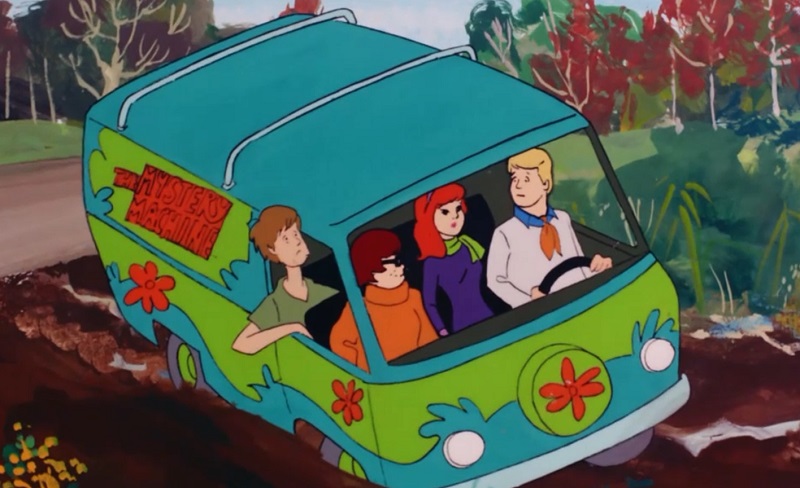 Scooby and Shaggy are instantly in love with Jeanie, who magically gets the Mystery Machine unstuck from the mud. Scooby and Shaggy asks for Jeanie to zap up some food, and everyone sits down to an impromptu picnic.

We also meet Babu who comes at the first sight of food.

The gangs decide to tag along with each other on the road as they enjoy each other’s company.

Babu gets a message from the Great Haji, Master of All Genies who demands they head off to Persia, which we now know as Iran. An old friend of Haji needs help so Jeanie must scoot over to Persia. The gang ask if they can tag along, so Jeannie transports everyone over to the friend’s Palace.

We then cut to an evil man with an evil Jin named Jadal who plans on ‘greeting’ Jeannie and her friends at the palace. Jadal the Jinn wants revenge on Haji as that’s who imprisoned him in a bottle centuries ago.

At the Palace, they notice the Palace is empty, so they’re all a little worried to go in.

The gates of the Palace open automatically, so the gang head in. Checking out the palace, they can’t find anyone, so the gang decide to turn in for the evening in one of the many bedrooms.

In Scooby, Babu and Shaggy’s bedroom, they find a mysterious man in the closet. The man teleports about the bedroom saying nothing, which terrifies everyone even further. Babu calls out for Jeanie who zaps the man and makes him vanish. 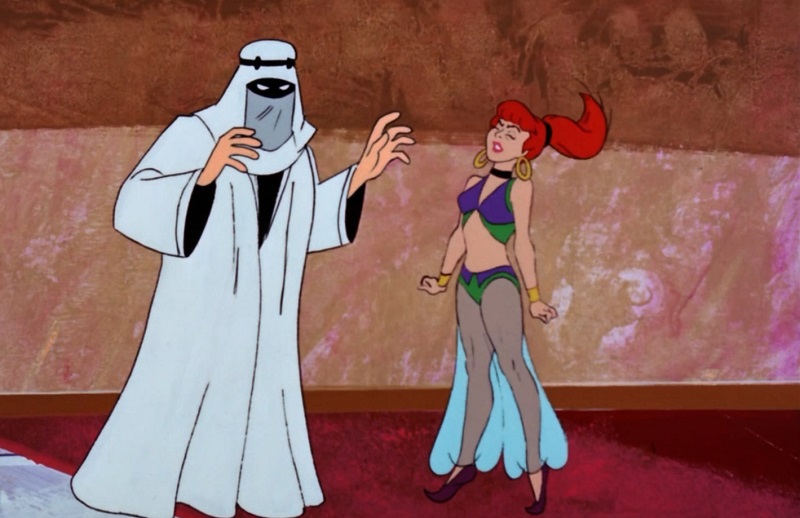 Over in Corey and Henry’s room the two have problems with a haunted mirror where a duplicate of Henry is causing the two grief.

Everyone heads back to sleep, and more chaos ensues as Corey, Henry, Freddy, Daphne, Velma Scooby and Shaggy vanish through trap doors in their respective beds.

Everyone then ends up outside, where they meet Prince Abin who welcomes them with open arms. We also meet his uncle Abudliah who we saw earlier with the evil Jinn named Jadal.

The Prince must rule the palace for one year without leaving in order to become a Sultan, unfortunately, the recent hauntings have him spooked. Prince Abin suspects Jadal the Jinn has been released and there is foul play at hand.

The uncle explains that the Prince needs to leave, however the Prince refuses to despite that everyone else has left. The gang decide to stay behind to help him out, despite the Uncle’s protests.

Meanwhile Scooby, Shaggy, Babu, and Henry have come across the evil Jinn and we get a few silly chase scenes until they reunite with the rest of the gang.

The evil Jinn puts a Jeanie in a trance and swipes Jeanie away so everyone splits up to search the palace. We get lots more hijinks where eventually everyone ends up in a cavern, where they also find Jeanie.

Jeanie and evil Jinn have a final duel and Jeanie imprisons Jadal once more in a bottle. They also figure out the Master was the Uncle who was jealous and wanted the wealth and power of the Palace. 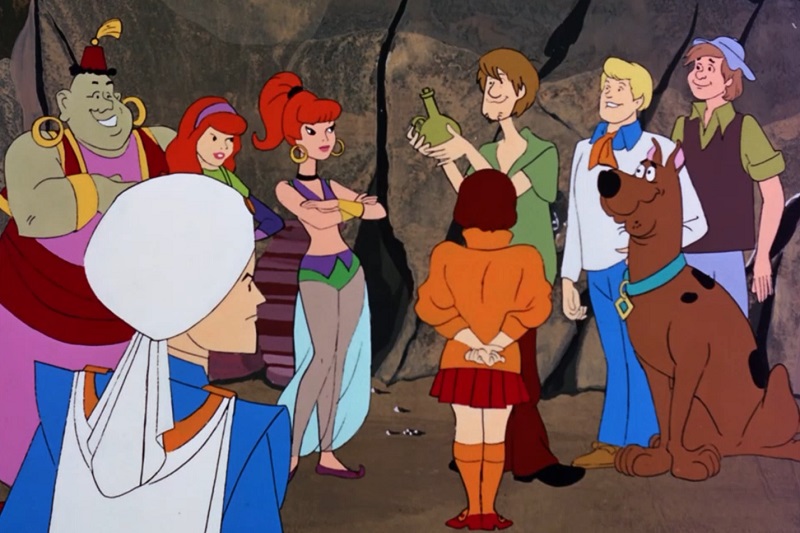 Prince Abin decides to let Haji, the grand genie, decide what to do with Uncle Abdullah’s fate.

And with another mystery solved, the gang head off on their next adventure.

This episode just took way too long to get going. Nothing really happens the first 20 minutes, and we just get a lot of boring padding.

While I liked Babu, I also found him annoying at the same time. So I’m not sure of my opinion of him.

Henry and Corey didn’t add much to the episode, and I feel if we just had Jeanie, this episode would have been way better. I suppose when this was released, Jeanie had her own show where people may have loved these characters, but 49 years later, it’s hard to figure out who is who.

There’s also too many Genies and gins in this episode which add to the confusion.

Well that wraps up another mystery. Join me next week when I will be covering The Spirited Spooked Sports Show.  Razzle Dazzle!