The Spirited Sports Show is the 4th episode of the New Scooby Doo movies – season 2 – and originally aired on September 29, 1973.

The episode sees the gang back in Velma’s old hometown where her former high-school is haunted by a ghostly athlete. Tim Conway also guest stars as the high-school coach.

Tim Conway was a famous comedian known for his slapstick comedy and dry humour. I’m not too familiar with Tim Conway had his rise to fame was well before my time, but I do remember him as Dorf the golf instructor, and the voice of Barnacle Bob on the Spongebob Squarepants show. Mr. Conway unfortunately passed away in 2019.

This episode is often cited as one of the best New Scooby Doo Movie episodes by Scooby fans, so I’m excited to watch this one. Anyway, enough of my Jibber Jabber, let’s get on with the review.

The episode begins with the gang driving through Velma’s hometown. They are on their way to Velma’s old high school for the all sports day benefit show.

It’s incredibly foggy out and Freddy is almost flattened by a bulldozer. Daphne suggests they get the driver’s license number, but Velma points out that nobody is even driving the vehicle.

They finally reach the high school and they spot a sign that says DANGER – no trespassing. More construction vehicles are driving about and they scare Freddy and the gang off. 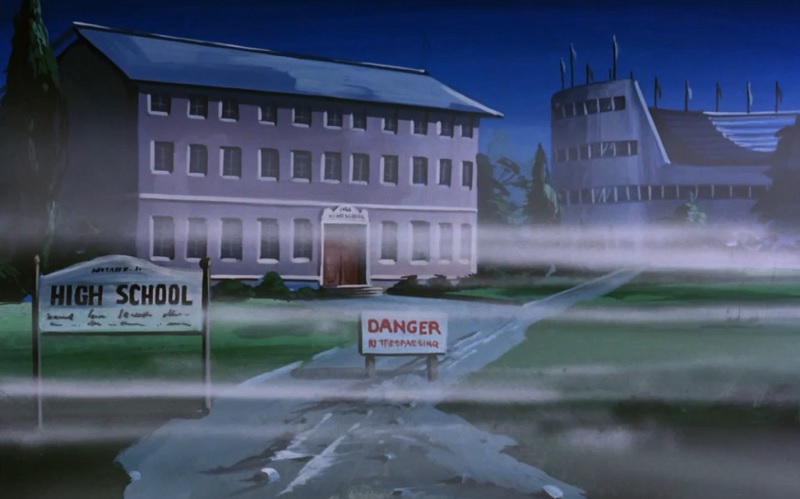 The gang then head off to the Sports Stadium which is deserted. Walking inside they meet Jesse Finster, the school custodian. Jesse explains the old custodian has disappeared suddenly, and the Sports show is postponed due to the haunting of Fireball McPhane.  Freddy remembers Fireball was a super athlete 30 years ago that suddenly disappeared.

Tim Conway then shows up and explains he’s the new coach. In order to prepare for a role of a Coach in a movie, Tim has to become one. Unfortunately he has no team as the stadium is haunted, and everyone has been scared off. 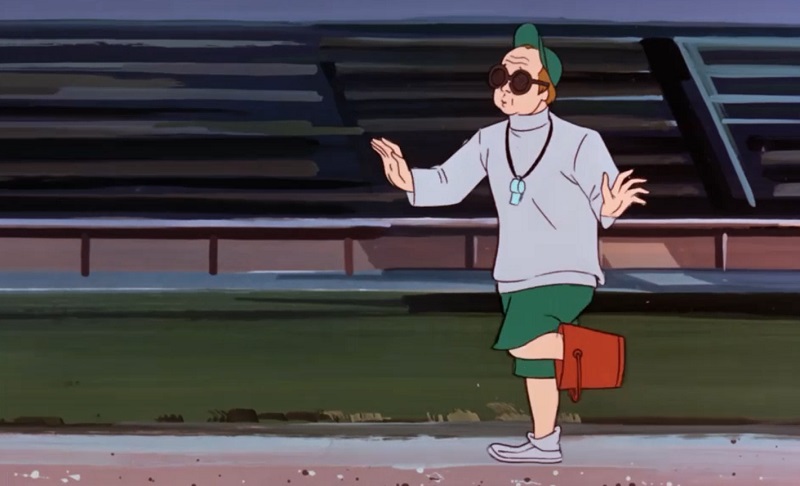 Fireball McPhane then shows up and gives everyone a good scare. 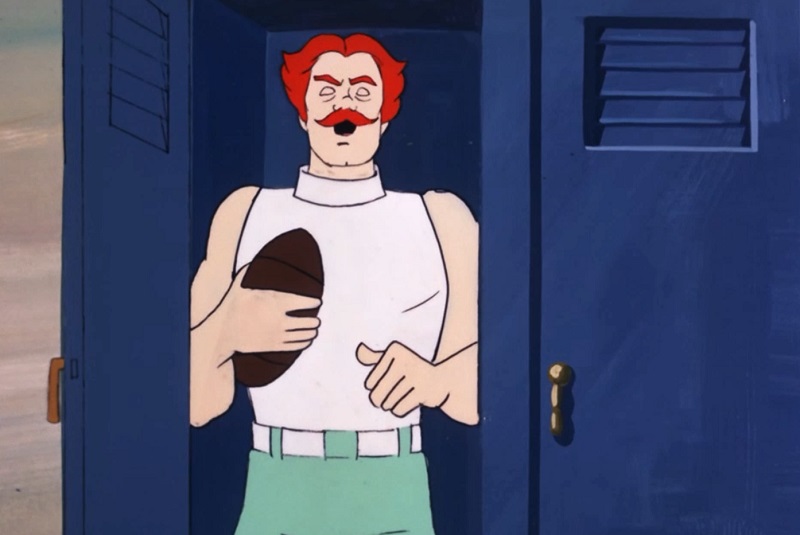 Back at the high school they talk with Mr. William Griffith the school principal. The principal does not recognize Velma, which she finds a bit unusual. Mr. Griffith explains that the school is being closed down as they don’t have enough financial aid. They had recently built a new stadium, but in order to continue to get funding the school needs a championship team.

The only way to raise money is through the all sports benefit show.

Mr. Teller, the man who is donating money to the school then shows up and explains he’s discontinuing his grants to the school so the land must be sold.

Tim Conway calls a meeting in the gym where he shows off his coaching skills to win Mr. Teller over. The gang then convince Mr. Teller that Scooby and Shaggy are world class athletes.

Mr.  Teller walks away laughing and Coach Conway gets down to business in training Scooby and Shaggy. Fireball then shows up and gives the cowardly duo some ghostly motivation where they run about the stadium in fear and break dozens of records.

Unfortunately Mr. Teller misses the entire demonstration, but explains he’ll be watching the benefit show tomorrow to decide if he donates his money or not.

Mr. Jessie Finster, the School Custodian then shows up and warns the gang once more. Finster explains years before Mr. Griffiths was a Principal he was an Olympic judge who disqualified Fireball out for cheating, thus Fireball is out for revenge.

Fireball then shows up as a ghost in the popcorn machine and Mr. Finster explains he’s had enough and leaves. He also suggests the gang do the same.

Scooby and Shaggy continue their haunted training while Freddy and the girls go out and look for clues. In the locker room they find a secret passage that leads them to the basement. Down there, they find a mockup of the school which has a racehorse on the school track.

A television turns on where Fireball laughs and sends the gang down into a cavern by way of a trap door. In the cavern our trio finds the construction vehicles that scared them off earlier. Scooby, Shaggy and Tim Conway get further frightened and also end up in the cavern.

In the cavern they find another model racetrack which Velma picks up as a clue. Tim Conway, flips on a TV and realizes that the tv remote controls the vehicles. Freddy then uses the bulldozer to escape from the cavern.

The gang then continue their training and Mr. Teller shows up to congratulate them from not leaving. Velma gives Mr. Teller a speaking to and suggests he’s behind the haunting as the construction vehicles belong to his company. Thus, he wants his land back and using the haunting to make it happen.

We get one long and final chase scene and Freddy and the girls capture the ghost in a musical cello case. They also find Principal Griffiths tied up in his office, along with a rubber mask of Fireball and some paperwork.

Despite Fireball being caught, Coach Conway, Scooby and Shaggy also catch another Fireball. Confused, they’ll know they’ll get to the bottom of things as the police show up.

Threatened by Velma’s claims, Mr. Teller had called the police. Freddy and Mr. Conway unmask the ghosts and one is Mr. Griffiths the school principal’s twin brother, and the other is his accomplice, Jessie Finster, the school custodian who is really a shady gambler. 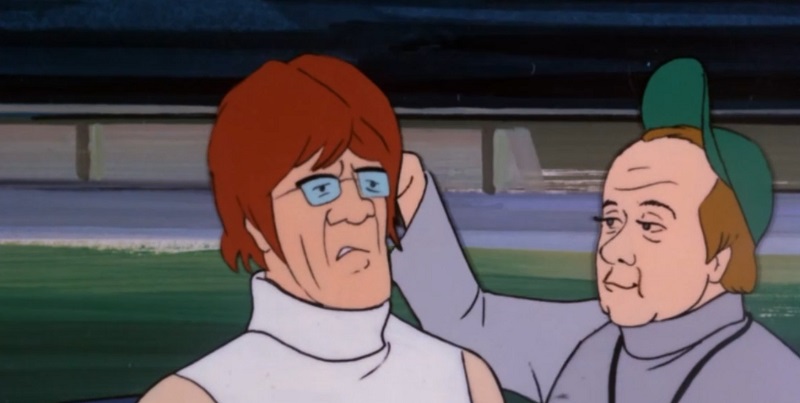 Mr. Griffith’s twin’s plan was to take over the school and use the haunting so they could buy the school cheap and the bulldoze so they’d have an instant horse racetrack. They also used projectors to project ghosts onto fog so they could make Fireball appear everywhere.

Mr. Teller plans on doubling his yearly grant and the school is saved. But first Scooby and Shaggy must perform in front of a sold out audience. Freddy dresses up as Fireball to give the two some motivation, where the two put on a fantastic show.

With another Mystery Solved, the gang head off to their next Mystery.

I think it boils down to the ghost who just looks like a regular man from the 40’s. Seriously, the guy is wearing tennis shoes, green shorts and a tank top. Had this ghost been given a better design, I’d give this one an 8.

What I did enjoy was the backstory of Velma going to a different school, and the plot was pretty good. Tim Conway was also excellent and fun to watch, but despite all these factors, I have no desire to watch this one again as I found the ghost lacking.

For me, the villain always makes or breaks an episode. The same applies to movies, what’s the Lion King without Scar, or Star Wars without Darth Vader.

Anyway, until next week when I will be covering the Exterminators, Stay Spooky.