The Haunted Showboat is the second episode of the second season of the New Scooby Doo Movies and originally aired on September 15, 1973

This episode guest stars Josie and the Pussycats who are hired to perform on a run down and haunted showboat.

Josie and the Pussycats was a popular spin off cartoon from Archie Comics, and had their own series that ran from 1970-1972. Instead of Ghosts, Josie’s adventures usually featured adventure and the plots were sort of spy or James Bondish in theme for season one. In season 2, the episode turned Science fiction with Josie off in space. Each episode usually had a fun song written for it.

By the time this episode aired, it was the last time we’d see Josie and the pussycats as their series was canceled in 1972.

Being a huge fan of Josie and the Pussycats, I expect good things from this episode. But will it hold up to my expectations, or will it be a dud? Let’s find out.

The episode begins with the gang lost on the road in Mark Twain country and on their way to a Mark Twain festival. Shaggy is the chief navigator and has taken them on another endless shortcut.

While driving, the gang hear a spooky groan, and the Mystery Machine gets stuck after falling through a rotten boardwalk board. 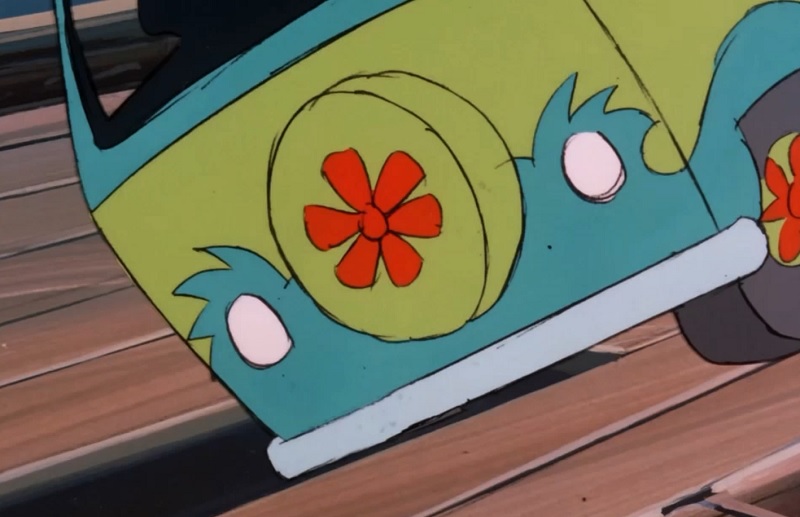 Stuck in front of an abandoned Showboat called the Dixie Queen, the gang decide to go aboard to take cover from an incoming storm. 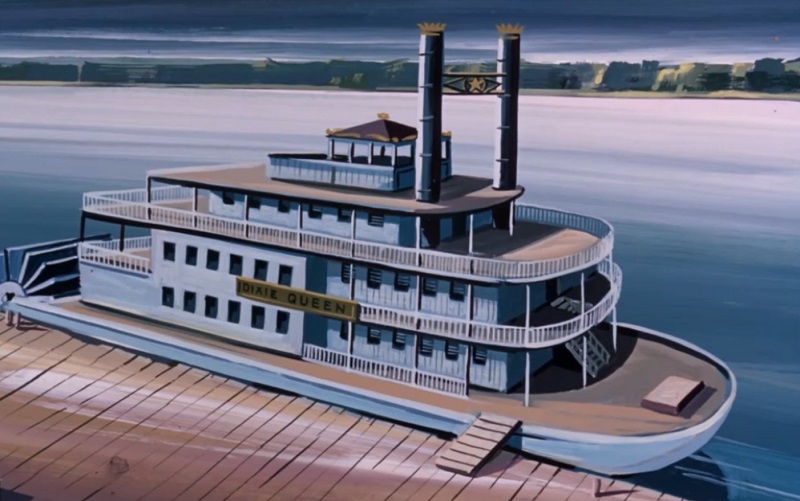 While boarding the showboat, the gang hear an evil cackle and run into the gang from Josie and the Pussycats who are running off the ship.

The gang recognize Josie and the Pussycats, who explain they had a show booked on the haunted boat they are now on. 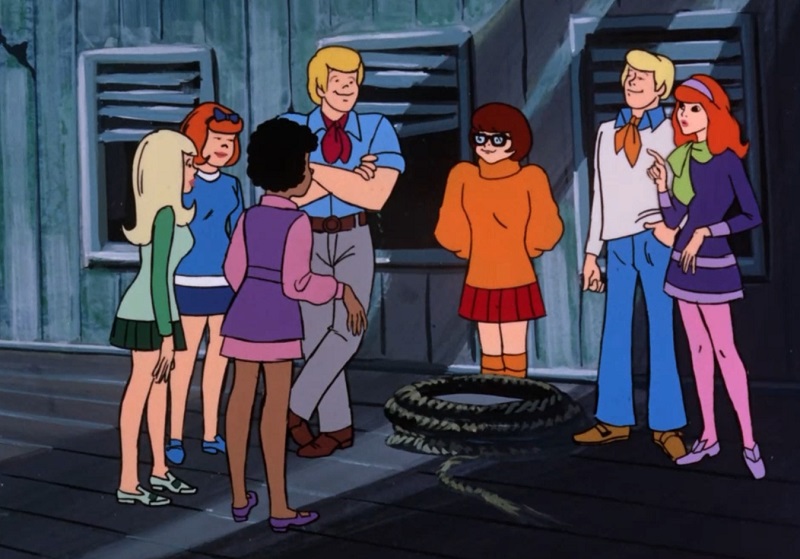 They also meet Captain Cannaby and first mate Johnny Briggs. Captain Cannaby explains he hired Josie so the Dixie Queen can make its triumphant return to the Mississippi.

Captain Cannaby hears some loose chains rattling and explains it’s Injun Joe, who is a villain from Tom Sawyer. Injun Joe was an escaped convict who dragged a chain from his wrist.

Scooby and the gang then run into the ghost which terrifies them. They also see another Ghost called the ghost of Captain Scavenger, who demands they leave the boat. 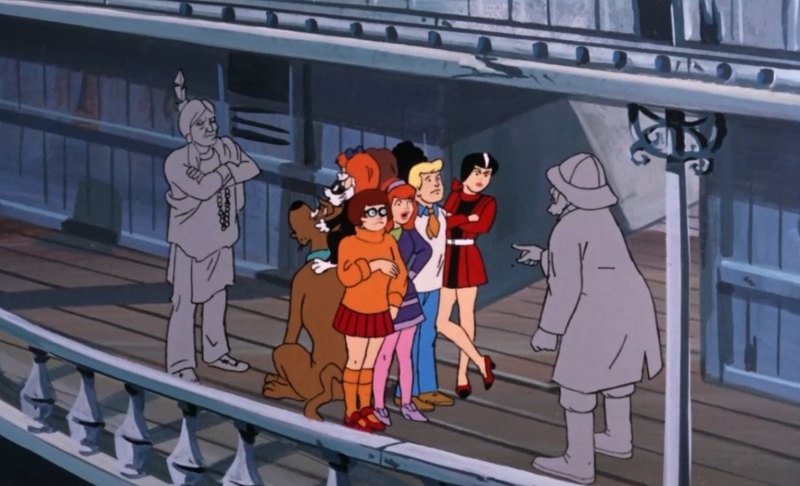 The gang decide to turn in for the night and put Scooby and Shaggy on guard duty. Our cowardly duo instantly run into the ghosts but are knocked out by a bottle of sleeping gas. Alexandra from Josie and the Pussycats suspects it can’t be a real ghost as they wouldn’t need sleeping gas to knock someone out.

Captain Cannaby then swings by and explains the boat is haunted as someone stole his life savings from his safe. Johnny Briggs is missing, and a note is left behind telling them to leave or else they’ll never see Johnny again.

Captain Cannaby tells them to leave while he goes to talk to the Sheriff. We then meet Lance Goodwin who wants to buy the Showboat to turn it into a gambling boat. Lance is very suspicious as he mentions that he knows Johnny is missing. 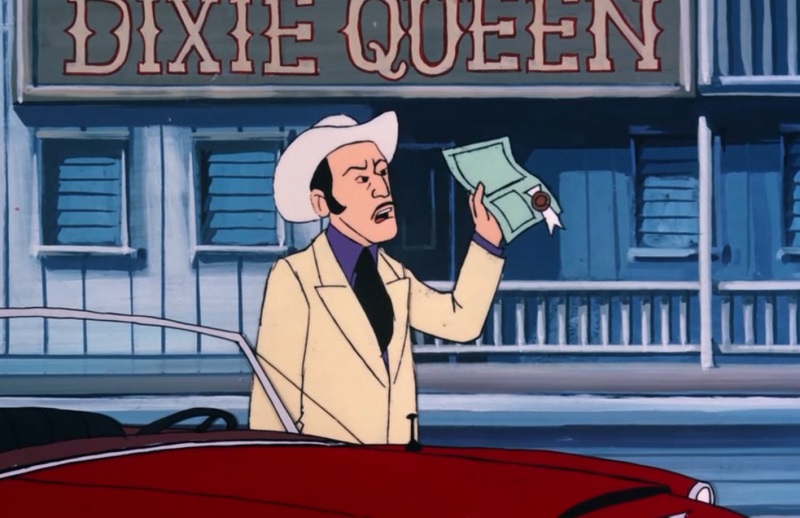 While Captain Cannaby is off to get the sheriff, the gang decide to fix up the boat. Lots of weird hijinks occur like chains getting in the engine equipment and the sprinklers going off. Despite all the chaos, the two gangs get the boat looking like brand new.

Lance Goodwin shows up once more tells the gang that he just bought the mortgage payments for the boat. If they don’t pay up in 3 days, the boat will be his. Josie explains after their benefit concert, they’ll have more than enough money to pay off the boat.

Freddy and the girls set up some traps and end up catching Captain Cannaby. The Captain explains the sheriff wasn’t in, but is impressed with the fixed up boat. The gang try to explain that it was probably Johnny who stole the money and ran off but the Captain won’t hear of it.

After running into the ghosts once more, the gangs huddle and put another plan into action. The gang’s plan fails as there are hidden microphones that reveal what’s going on. The two gangs also find the stolen money, but are trapped in a net. Fortunately Scooby and Shaggy are off on their own so they are available to rescue them.

The net is placed on a barge, and the gang are taken off the showboat. Thinking fast, Josie tosses money into the water so that she can leave a trail.

Shaggy and Scooby pick up on the money trail quickly and follow it to a hidden cave, where the others are placed in a sunken pit.

Shaggy lowers the cargo net so everyone can climb out of the pit, and we get our final chase with Injun Joe and Captain Scavenger.

Eventually, the ghosts are captured after falling into the water.

Lance Goodwin shows up and introduces himself as a US Treasury agent. Captain Scavenger is Captain Cannaby, who has a second disguise, and is Jack Canna, a notorious counterfeiter. His partner was a fake Injun Joe.

Johnny shows up and says he inherited the boat, and unbeknownst to him, Captain Cannaby was just using the boat to counterfeit money. When he got wise, he was thrown in the brig.

The criminals were using the cave to print up the money, and the Showboat to distribute it.

With another mystery solved, the Showboat sails again and Josie performs her benefit show

It was okay. Kinda boring and the heist was kinda interesting, but overly complicated.

Back in the 70s this was probably a much fun watch as Josie and Pussycats were at their peak, however, 49 years later most people watching this probably won’t know who is who.

The ghosts were also lame. While it was cool they tried to keep them Mark Twain themed, the ghosts just seemed like bumbling idiots.

What I did enjoy was watching the kids fix up the boat. That was a lot of fun, and added an extra point to my score.

I also wish Josie performed an actual song in the episode, but that never happened, so I took a star off my score.

Overall though, this one is a decent watch, although a bit padded and boring, but just didn’t live up to my expectations or spooky standards.

Until next week, when we will be covering the Mystery in Persia, Stay Spooky!