The Mystery of Haunted Island is the 1st episode of the second season of the New Scooby-Doo movies and originally aired on September 8, 1973.

The episode sees the gang going on a picnic cruise with the Harlem Globetrotters , but unfortunately they end up on Haunted island.

So far I have enjoyed all the Globetrotter episodes, and I’m hoping I’ll like this one too. Anyway, enough of my jibber jabber, let’s get to the review.

The episode begins with the gang excited to go to Picnic Island. Running out of gas, the Mystery Machine stops in front of an old fisherman’s shack. Heading in to investigate, they realize the shack is empty and search for a phone. 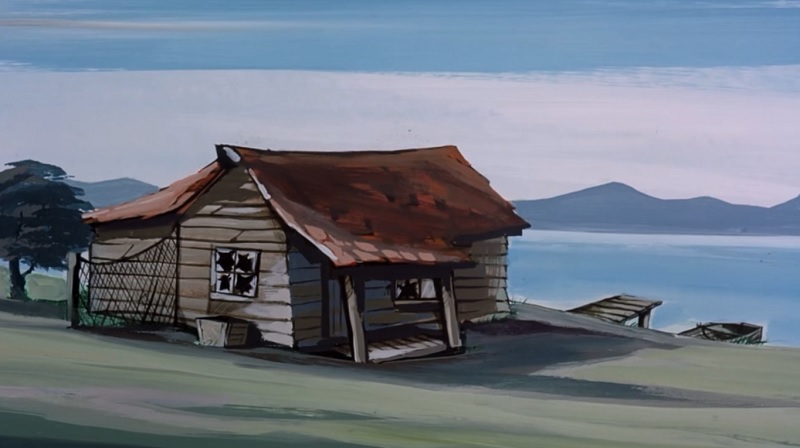 Shaggy hears some weird noises from the basement, and they soon discover the Harlem Globetrotters down there playing basketball. The Globetrotters have big game tomorrow with the Ocean City Scorpions. 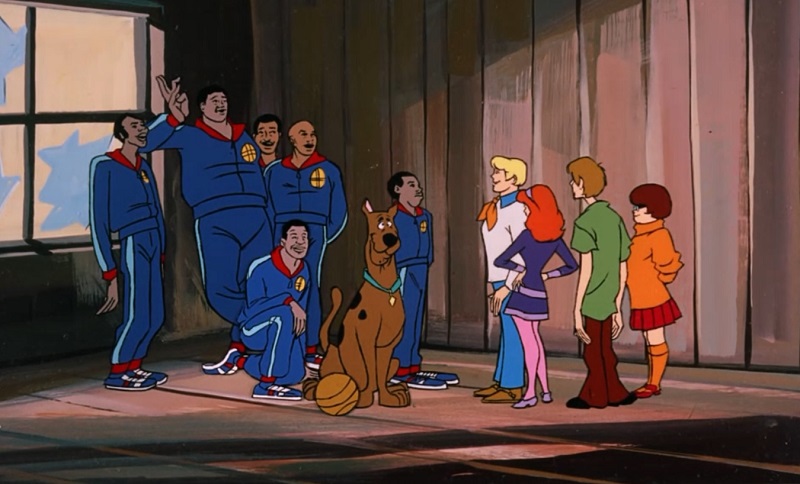 The gang invite the globetrotters on their excursion cruise to picnic island, so the Globetrotters fill up the Mystery Machine gas tank and the two groups board race towards the Picnic Island excursion boat. Unfortunately, they arrive too late and the boat has set sail. A mysterious figure has moved the boat boarding sign to an old tanker, which the gang board instead. 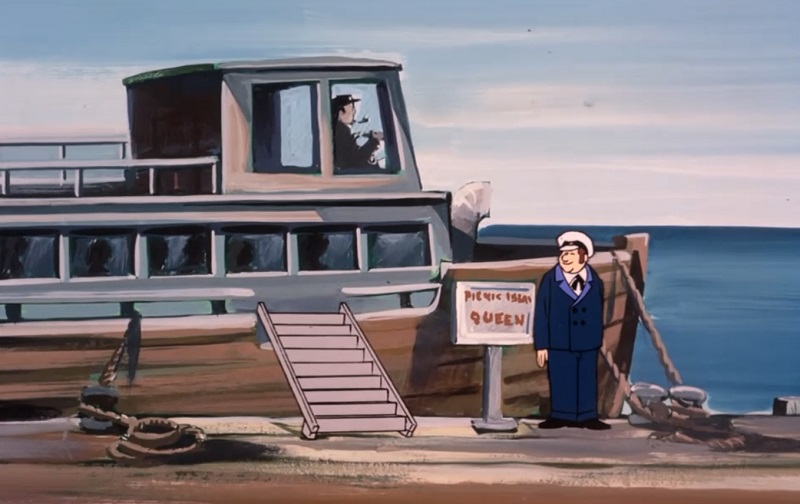 Heading out to sea, the gang feel something fishy is going on but have no escape as the waters are full of sharks, barracuda, swordfish and octopus. Investigating, Freddy and the girls find a haunted wheel, where the ship is being driven by a ghostly invisible figure. 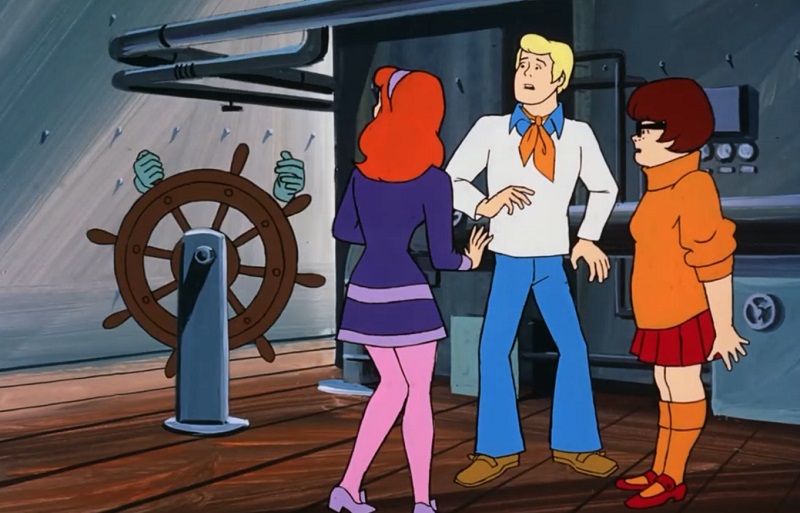 Curly believes they are being sea-jacked and taken to haunted island. Meadowlark has found an old map of the island which is how he has figured out this mystery. 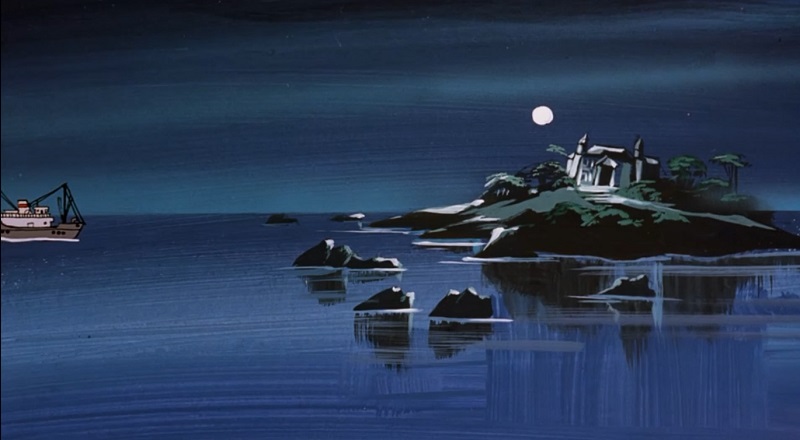 On Haunted Island, the gang are about to crash into a giant rock, so everyone abandons the ship. It is now night time, so everyone figures they’ll rest and signal a ship out in the sea at day time.

They also find an old mansion, so they enter it hoping they can spend the night there. 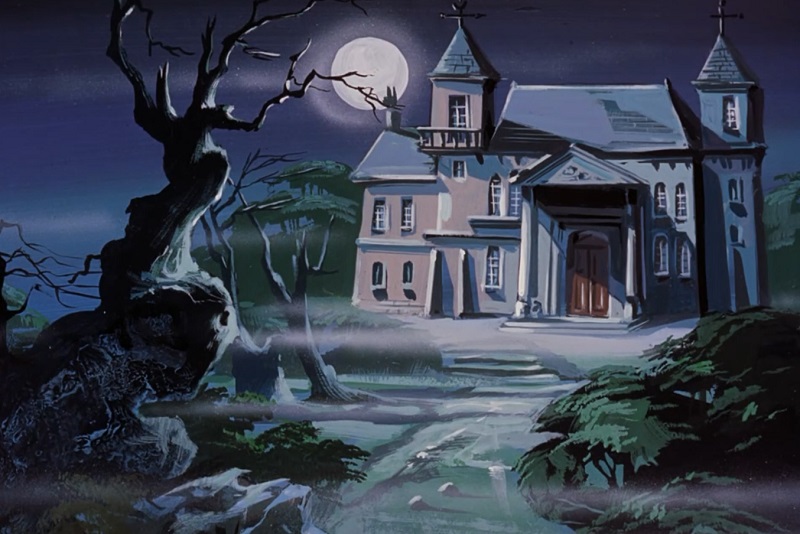 Inside the mansion, the lights are on, so they rush in after being frightened by some bats. The mansion is decorated in creepy, with suits of armour, old portraits and stuffed animals scattered around the building.

We also get floating Aztec statues that haunt Shaggy and Scooby.

The gang and globetrotters split up into separate rooms for a good night’s rest. The globetrotters take one room for themselves and crowd the six of them into one bed. The bed gets even more crowded as Meadowlark wakes up with a suit of armour beside him. 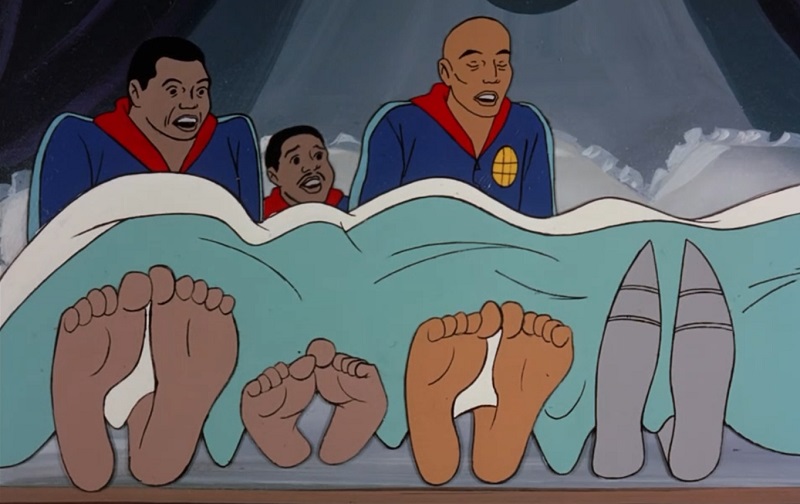 The globetrotters have a tussle with the suit of armour, and they find a secret passage under their bed that leads them to a library where they discover some glowing books. Ripping out all the books, the globe trotters look for an exit. Meadowlark finds luminous handprints on the library shelves that bring them to a clock that doubles as a secret passageway.

Shaggy and Scooby also have a ghostly encounter and make a racket so loud that they wake up Freddy, Daphne and Velma who go off to investigate. Velma finds luminous footprints, so they follow them, hoping they’ll find everyone else.

Eventually everyone reunites outside the mansion and the gang and Globetrotters spot two ghosts walking into a building who is let in by a third ghost. The gang smoke the ghosts out of the building and capture the three ghosts. 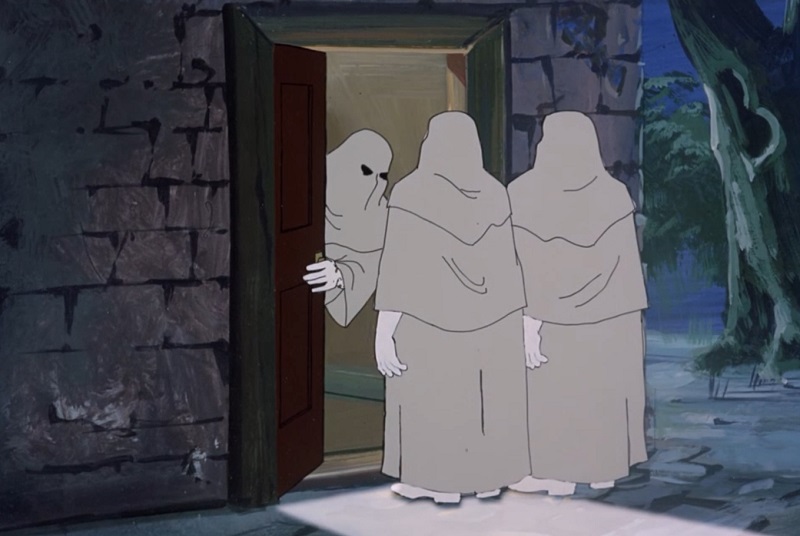 Unmasking the ghosts, it turns out to be the owner of the Scorpions, plus the owner and trainer. They wanted to keep the globetrotters awake so they’d be too tired to play the next day. 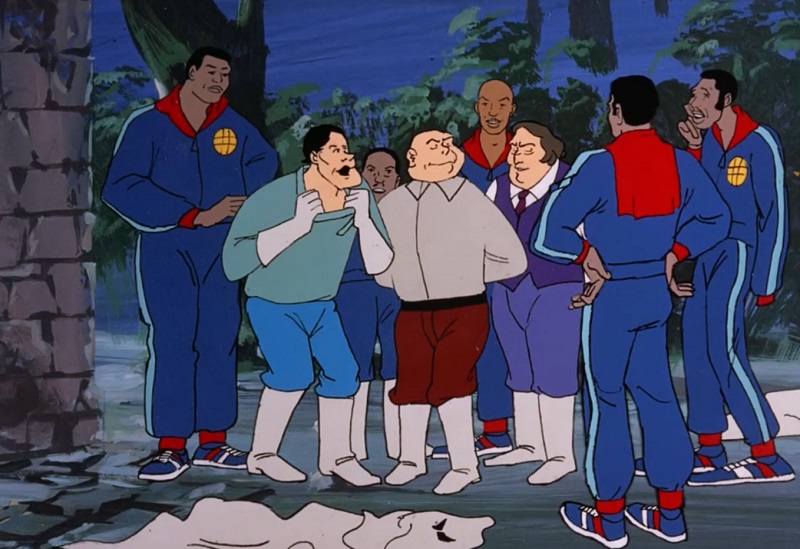 Daphne figures out everything was luminous paint, cardboard statues, wires and sheets. Everything, including the boat was rigged to work automatically.

With another mystery solved, the Globe Trotters are set to play their next game. Unfortunately, they are tired, so the Scorpions are clobbering them on the court.

Using ice cubes to shock them awake, the Globetrotters make a comeback and win the game.

This episode was good, but fairly bare-bones as the villains were not interesting, and I felt this ruined a cool spot like Haunted Island.

Also, the Mystery is solved at the half-hour point, so the last 10 minutes is a basketball game. Which isn’t a bad thing, but it just leaves less room for spooky happenings.

Still, this episode isn’t boring nor did it feel padded, and as Saturday morning entertainment, it does its job. The globetrotters are also a joy to watch, and I plan on watching their series eventually, if I can ever find it.

Until next week, when I will be covering the Haunted Showboat, stay spooky!