Jeepers, It’s the Jaguaro! is episode 8 of the third Season of Scooby Doo Where are You and originally aired on October 28, 1978.

In this episode, we see the gang near Brazil where they have an emergency landing on a remote island where a tribe of headhunters and the Jaguaro roam. The Jaguaro is this giant mythical creature with the body of an ape and the head of a Sabretooth Tiger.

I’ve reviewed this episode earlier on, but it was back when I didn’t really know what I was doing so it sounded like garbage. It also had something like 30 copyright strikes, so I’m giving it another go.

I don’t have much in the way of Trivia here, other than there’s no Mystery Machine in this episode and the Jaguaro was later seen in the Scooby-Doo and the Cyber Chase. 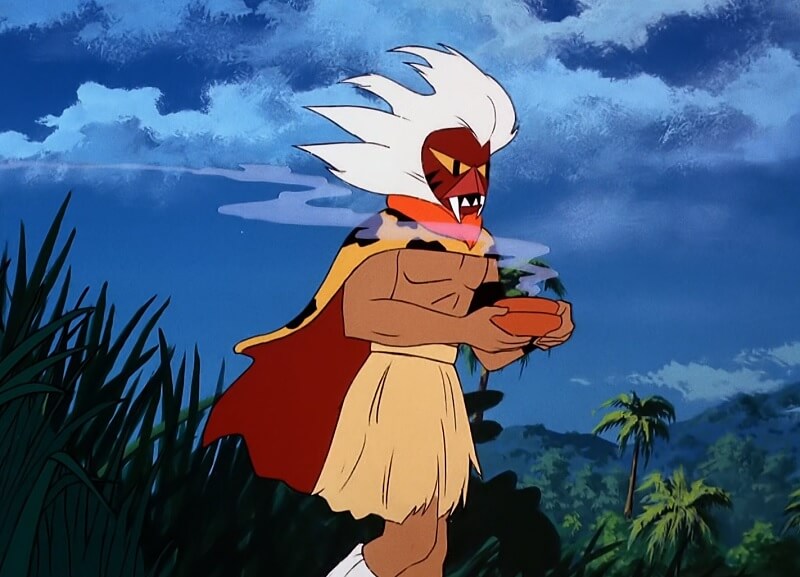 The episode begins on an Island in South America. Two tribesmen bow to a giant statue of an ape with the head of a saber tooth tiger. A high priestess comes out of the bush with a steaming bowl of magic and the giant statue comes to life and screams.

The tribesmen and priestess run off in fear. 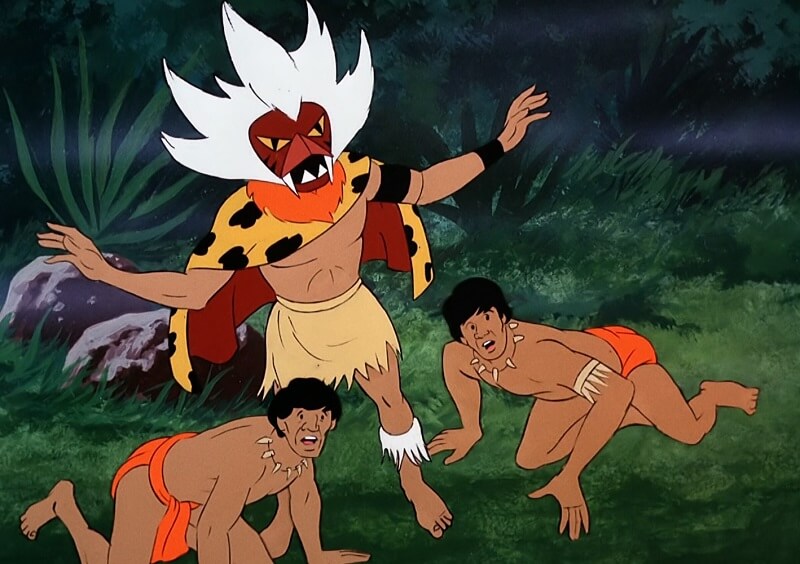 Over the jungles of Brazil, the gang are in an Airplane and are excited to land shortly in Rio De Janeiro. They aren’t in a commercial airline, but a private charter, which means someone in the gang has deep pockets. Maybe that confederate money Scooby inherited in A Night of Fright is no Delight wasn’t so useless after all.

Up in the pilot’s cabin, the pilots notice they’ve run into rough air. The co-pilot checks on the gang and asks Scooby to settle down with his dancing.

The plane has also run out of gasoline, so the plane has to make an emergency landing on the jungle island where they’ve found a clearing. 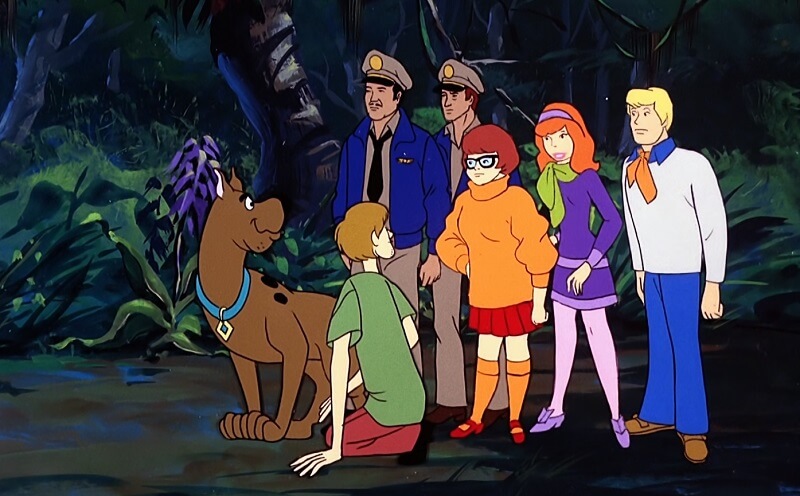 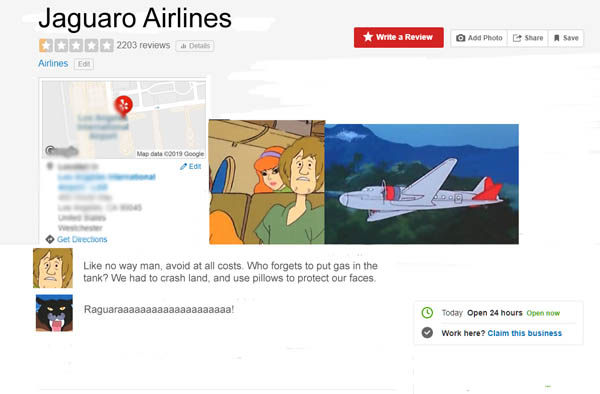 Safety landing, Scooby and Shaggy kiss the ground as they hear drums in the distance. The pilots are concerned as they are in Jaguaro country, and explain the mythical beast to the gang.

The pilots explain the head-hunting natives worship the Jaguaro, and that statement makes Shaggy a little more nervous.

The pilots feel the problem is a clogged fuel line and get started in repairing the airplane. Freddy has a map and decides the gang should split up and look for a boat to get them out of there. Freddy and the girls head off to a nearby village while Scooby and Shaggy head to the river.

At the River, Scooby and Shaggy immediately run into the Jaguaro which screams at them. A chase occurs and the gang run into all creatures dangerous such as Piranha, Anaconda and Alligators. 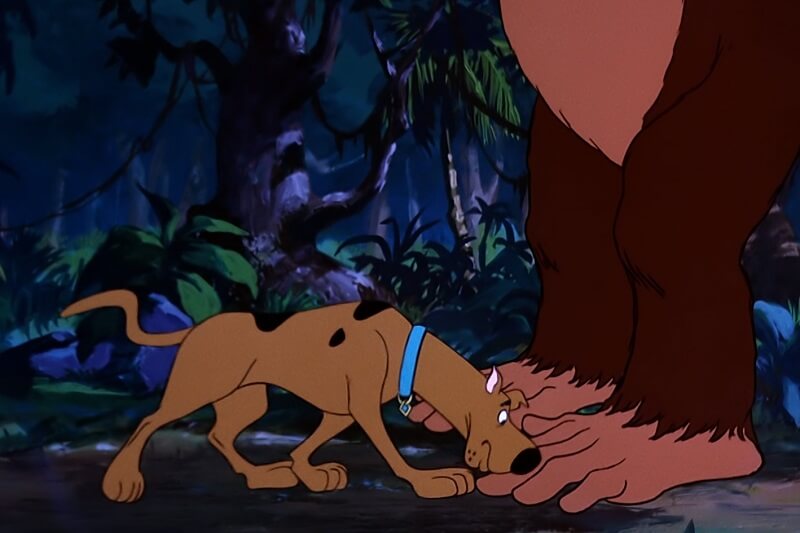 Back in the jungle with Freddy and the girls, the trio watch Natives dance in the jungle. A boat drives by and talks with a filmmaker named Barny who is making a film on the Jaguaro worshiping natives.

He explains the natives are working their way up to hunt down the gang as they saw a great bird in the sky land on the island which angered the Jaguaro. Barny tells the gang to head back to the plane and get the heck out of there. Daphne asks if Barny could just boat them away but he explains his old tub can’t handle the rapids to get them into town. Instead he’ll go back to civilization and radio for help.

The gang reunite at the airplane and find that it has been torn apart and is covered in claw marks. The pilots are even missing. Velma finds a torn scrap of the pilot’s uniform on the ground, and there are marks on the ground that suggest the pilots were dragged off. 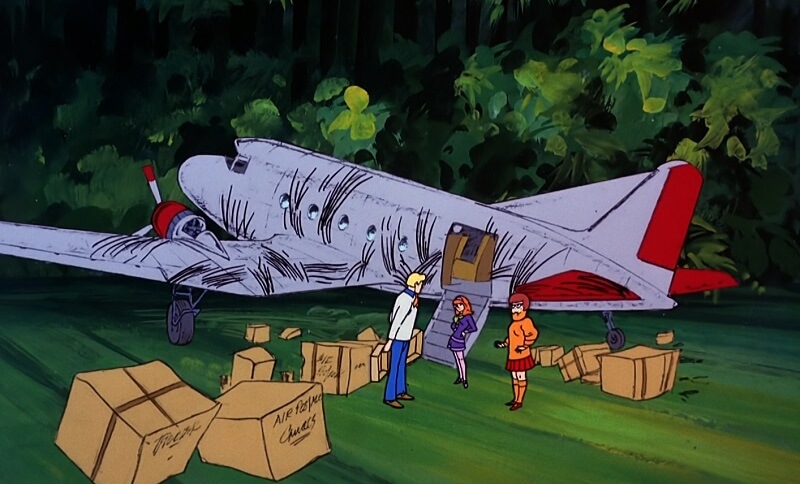 Shaggy and Scooby stay back to guard the plane while Freddy, Daphne and Velma follow the drag marks. While looking for food around the airplane Scooby and Shaggy are soon captured by the natives.

Velma, Daphne and Freddy discover an old hut and inside Freddy discovers some gold mining equipment. They also spot Barney, who has co-pilot Louise on it with him. He explains the Pilot Jose was captured by the Jaguaro.

The gang hop in the boat and Barney takes the gang back to their plane and tells them to get away fast. He says he’ll radio the authorities after he drops them off so they can find Jose.

In the boat Velma finds a piece of scratched up glass. Before hopping off the boat. Barney hands Luis a canister of film and asks him to drop it off in Rio at his film lab.

In the village, Scooby and Shaggy sit in a tent surrounded by human skulls while the Natives dance outside. Scooby uses his tail to free themselves from the rope that binds them and disguise themselves as natives so they can escape. The natives catch on quickly as they spot Scooby’s tail so they run towards the bridge. 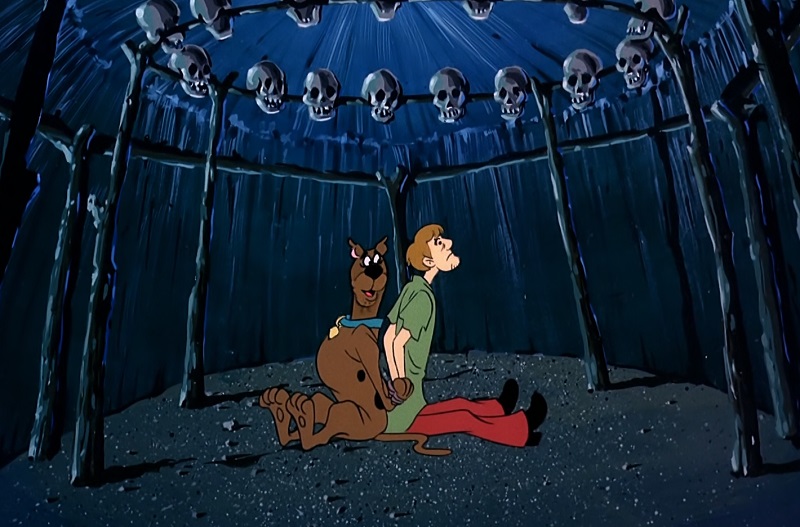 Freddy, Daphne and Velma sneak into the cave and find a smaller statue of the Jaguaro. They also hear the Jaguaro screaming. Looking outside to investigate, Freddy and the girls see Scooby and Shaggy on the bridge, which has the Jaguaro on one end and the natives on another. 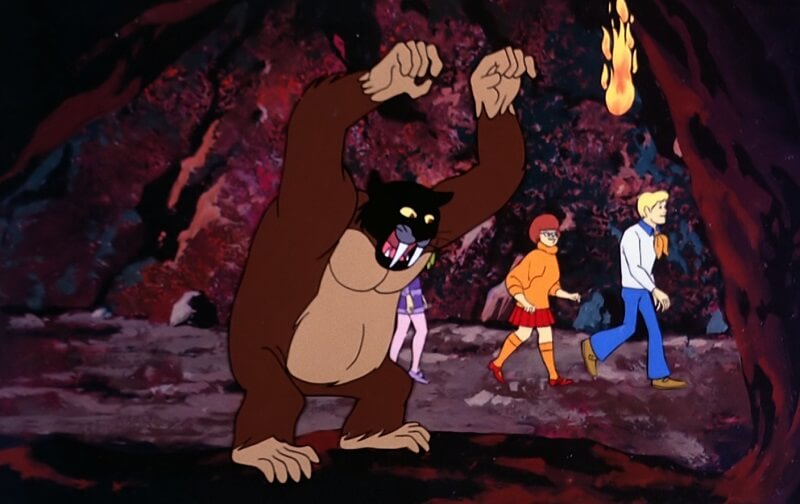 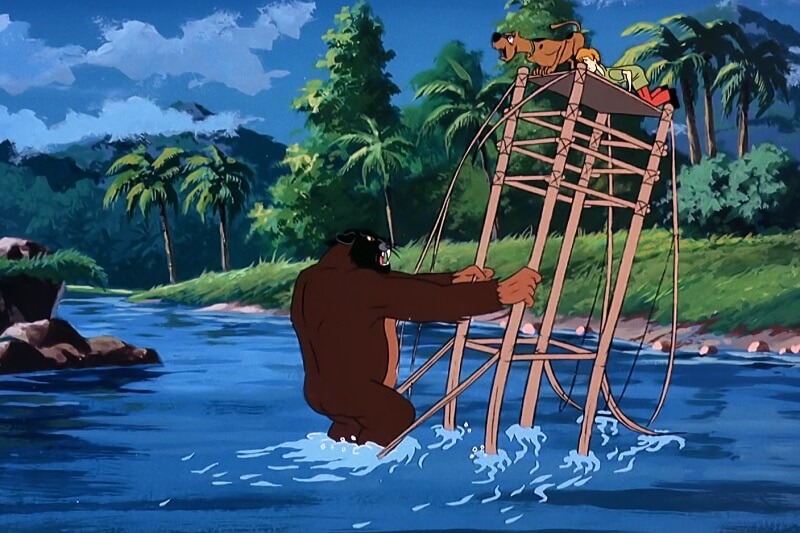 Everyone heads down a waterfall and the platform conveniently traps the Jaguaro.

Ripping off the Jaguaro mask, it’s revealed to be Barney. Shaggy’s the one to yell out that it’s Barney, which is a bit odd as the two never met in this episode, but whatever. 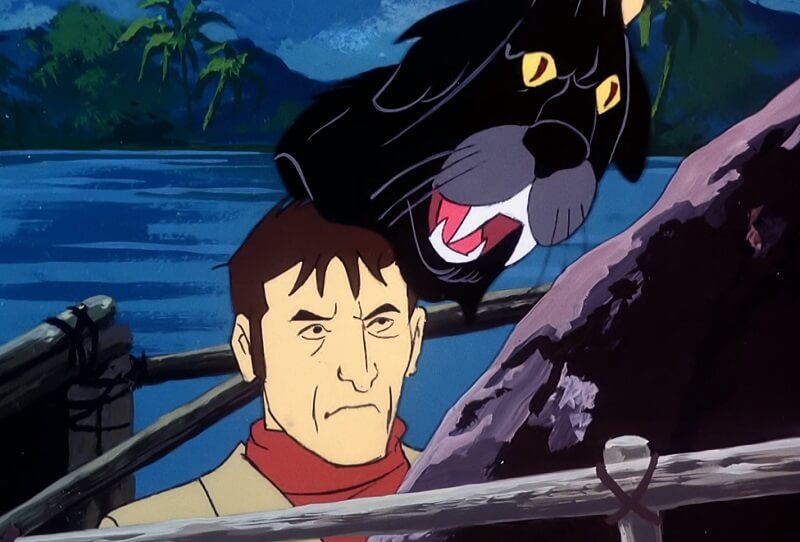 Back at the airplane Jose, the kidnapped Pilot thanks the gang for freeing him. There Velma explains his co-pilot Louise and Barny were involved in a diamond mine scheme. Luis faked an emergency landing so he could pick up the film container that contained diamonds. 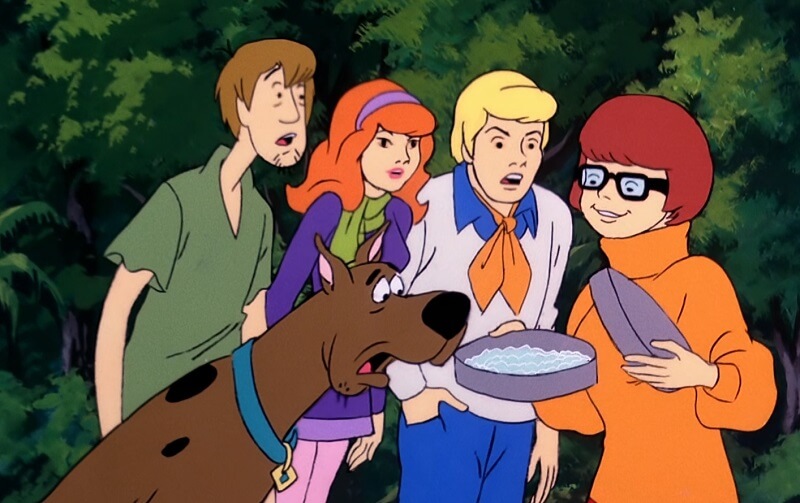 José was kidnapped as he spotted Barny panning for diamonds at the river, and the cut up piece of glass Velma found was glass scratched up from when they tested the diamonds. Louise tells them that they are all being ridiculous and have no proof but Velma snatches the film canister away from him and reveals the diamonds.

Luis tries to take off but Freddy had enough forethought to remove the spark plugs. 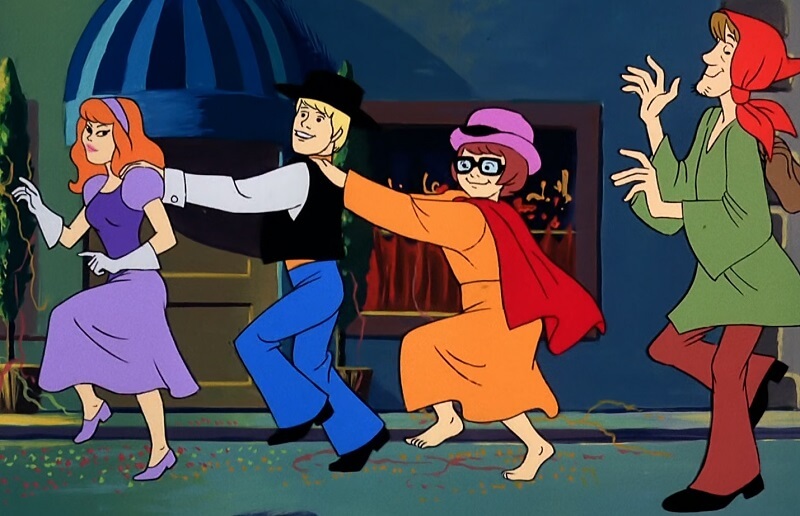 To celebrate, the gang make it to Rio de Janeiro and dance in the Rio Carnival.

The appeal of this episode to me is the exotic location complete with headhunters and a giant beast that screams. While Scooby and Shaggy have a lot of silly gags in this episode, it’s quite suspenseful as they are constantly in danger with Snakes, Apes, Alligators, Piranha, the Jaguaro and Head Hunters.

Freddy, Velma and Daphne have a lot of on screen time, and I found the discoveries they made were quite interesting and creative. This one kept me guessing the first time I saw it.

Seeing the airplane all clawed up was also Spooky.

The Jaguaro looks cool, and of course varies in size. There’s no explanation how Barney made the creature look so gigantic, but he must have taken notes from the Jean Pierre Baptiste from the Snow Beast episode.

This isn’t a perfect 10 for me as it’s not my favourite from the season, but it will probably make my top 5

Until next time, when we will be covering Make a Beeline Away from the Feeline, STAY SPOOKY!