The Beast is Awake in Bottomless Lake is the final episode of Season 3 and originally aired on December 23, 1978.

Here we see the gang up in Canada, where they discover a Beast terrorizing a small tourist town that features the best pike fishing in Canada. The town has a bottomless lake which may soon hit rock bottom as all the water is draining out.

Bottomless lake refers to what’s called a Meromictic. With these lakes, the depth of the lake is greater than the lake’s surface area. This causes very little oxygen to reach the bottom of the lake where nothing can live. It’s neat as archeologists have been able to discover artifacts that are centuries years old in these lakes as things take forever to rot or decay.

Meromictic, or bottomless lakes are only found in British Columbia, Quebec and Ontario, so I am assuming this episode takes place in British Columbia as they cross over to Canada, and references to the Yukon are made which is directly above BC.

To me, the Beast is one of my favourite character designs, but I often don’t think about this episode all that much. Is this a forgettable episode, or a hidden gem? Let’s find out.

The Beast is Awake in Bottomless Lake – Episode Review

The episode begins with a creepy shot of the bottomless lake beast.

We then cut to the gang in the Mystery Machine who are headed off for a Northwoods Trip. Freddy is particularly excited for some fishing.

While driving, they come across a flooded road, so they take a detour using a side road. Velma finds this strange as it’s fall and rivers typically flood in spring. 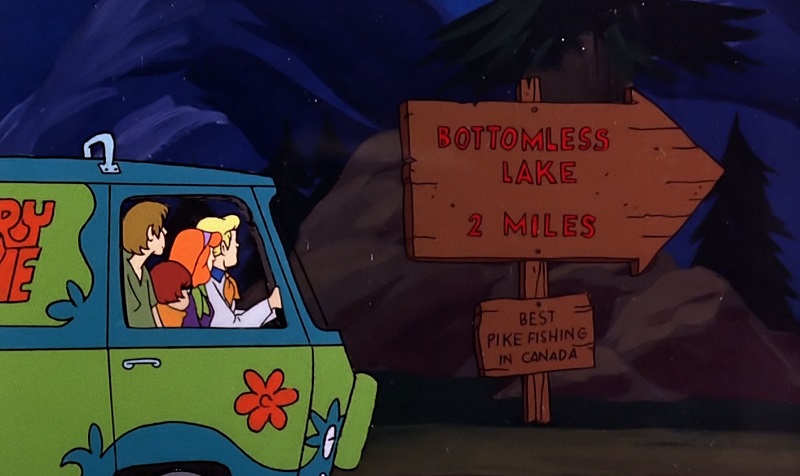 The detour takes the gang to the US/ Canadian border and a sign points to Bottomless Lake which features the best Pike Fishing in Canada. Enticed by the sign, they head into Canada after a nice Mounty tells them to go ahead.

A Mounty tells them that they’ll have the place to themselves, and to go straight ahead, as they can’t miss it.

The gang do miss it and they have to stop for directions. Shaggy and Scooby walk up to an old cabin and are confronted by the beast, so the rest of the gang check it out but find nothing.

Finding an old sign, they see that the village is only one mile away, so they head into Bottomless Lake Town. 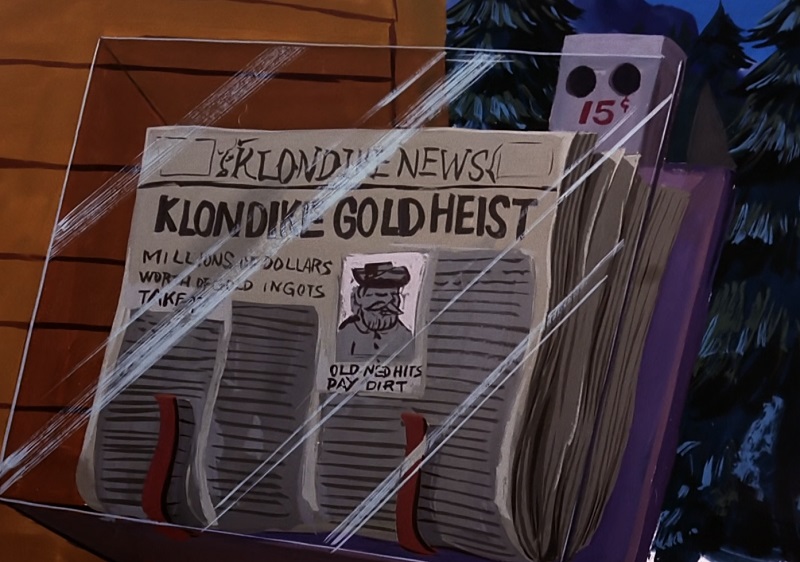 In town, every store is empty, and Daphne discovers a newspaper that is three weeks old. In the newspaper, they read about a Yukon gold heist.

A French-Canadian, named Chevaux Le Beau who owns a gas station / bait shop approaches them, and warns them of the Beast He explains there was an ancient legend of a glowing eyed beast that casts weird lights. Three weeks ago, this beast made an appearance and the water levels in the lake began to sink.

Mr. Teller then shows up and buys some bait exclaiming he hasn’t left town yet as he wants to catch a giant pike. Chevaux LaBeau sells him the last of his bait and then directs the gang to the market before telling him to do as he is, and to leave the town immediately. 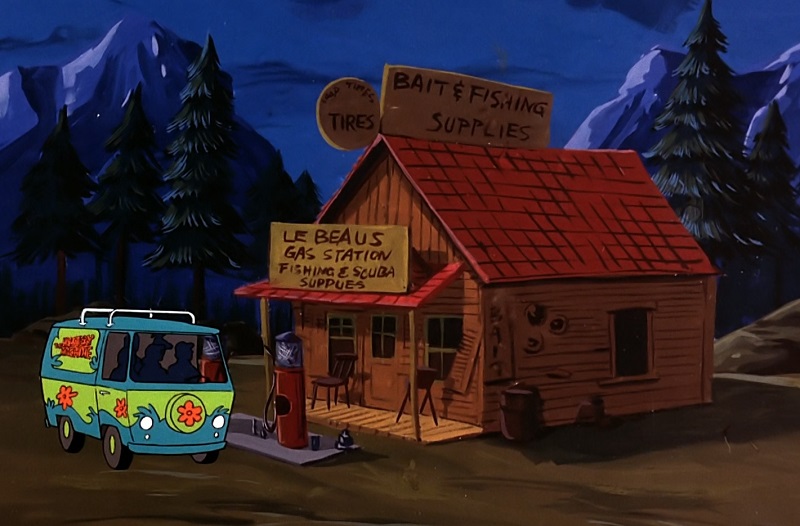 At the Johnson’s Family market, the gang stock up on supplies Here they find a cat, and Julie Johnson, who says her family has left. Julie says she’s come back to get her cat, but when she goes to get it, the cat rushes off.

The gang then head to the lake where they see the water levels are way down. Pitching a tent for the night, the gang go to sleep.

The gang are woken up by the sound of thunder, but there isn’t a cloud in the sky. The gang head to the lake and see the lights of the beast in the lake. Scooby and Shaggy keep an eye on camp while Freddy and the girls go and investigate.

Of course it doesn’t take long for the beast to confront Scooby and Shaggy and a small chase occurs. They lock the beast in a cabin, and when they call Freddy and the girls back, they find the cabin empty.

Inside the cabin they find a wet carpet, and when Velma lifts it up they find a secret underground tunnel. Freddy also finds some green clay which Velma has her suspicions about.

Scooby and Shaggy stay in the cabin while Freddy, Daphne and Velma go investigate the tunnel. As soon as Freddy and the girls are out of sight, the beast shows up once more and terrorizes Scooby and Shaggy.

Our pair hide in the mystery machine and Shaggy nearly drives the vehicle into the lake where they get stuck. Finding an inflatable life raft they manage to escape. 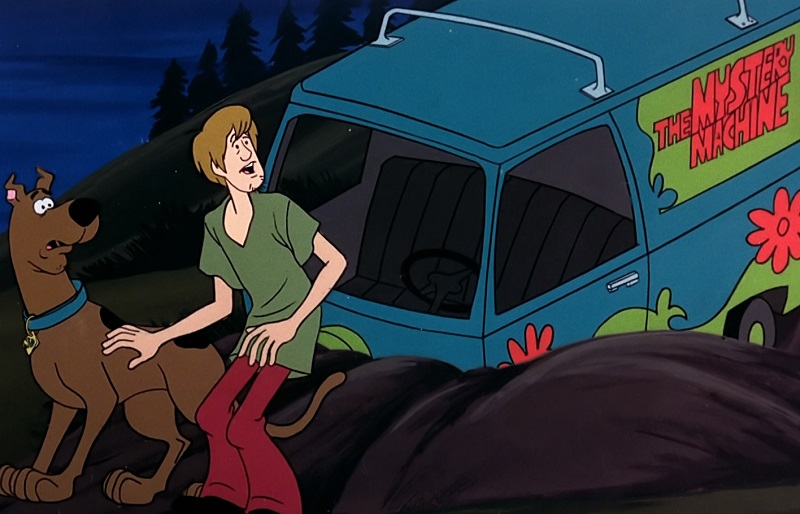 Freddy and the girls make their way out of the tunnel where they come across Shaggy and Scooby. On the life raft, they discover that it’s a pontoon, and has part of a sign on it with the letters KL

Scooby and Shaggy head into town to find Scuba gear and the beast follows them there.

Back on the lake, Freddy and the girls discover some footprints that weren’t there earlier and the footprints take them into town.  Inside of Mr. LaBeau’s shop, Scooby and Shaggy load up on Scuba gear.but are once more confronted by the beast.

The beast heads into the bushes and Mr. LaBeau emerges and tells them to feel free and borrow the Scuba Gear

Freddy and the girls head into the water, and for the 4th time Scooby and Shaggy are chased by the Beast, so they suit up and dive in. 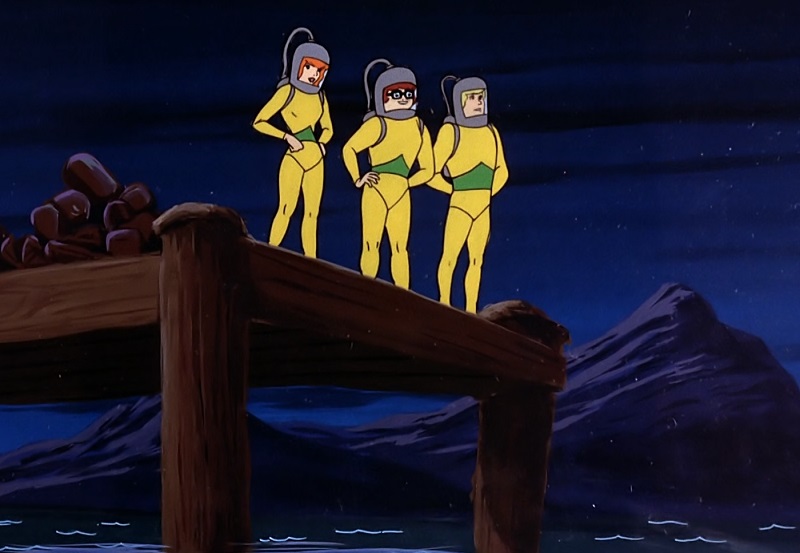 In the water Scooby and Shaggy find a tank, where they find Freddy, Daphne and Velma observing some wooden crates. For the last time, the beast shows up and takes chase. Lots of hijinx occur and the beast is finally caught in some netting held up by some henchmen. 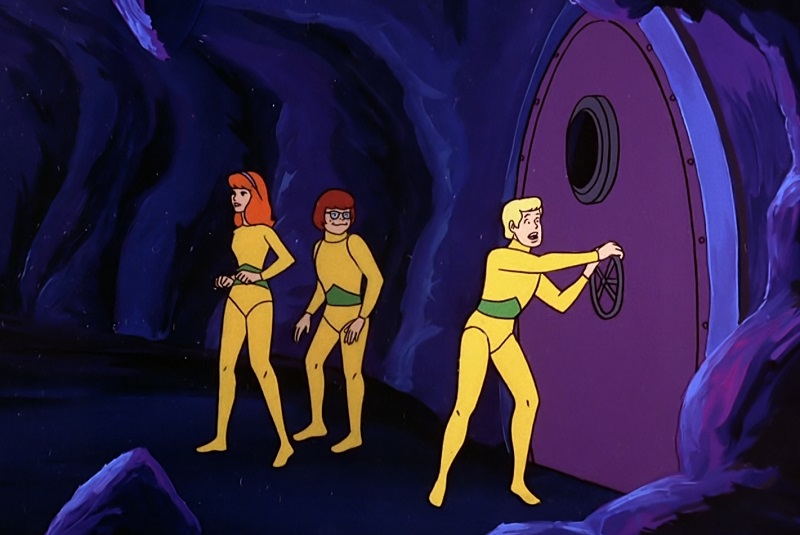 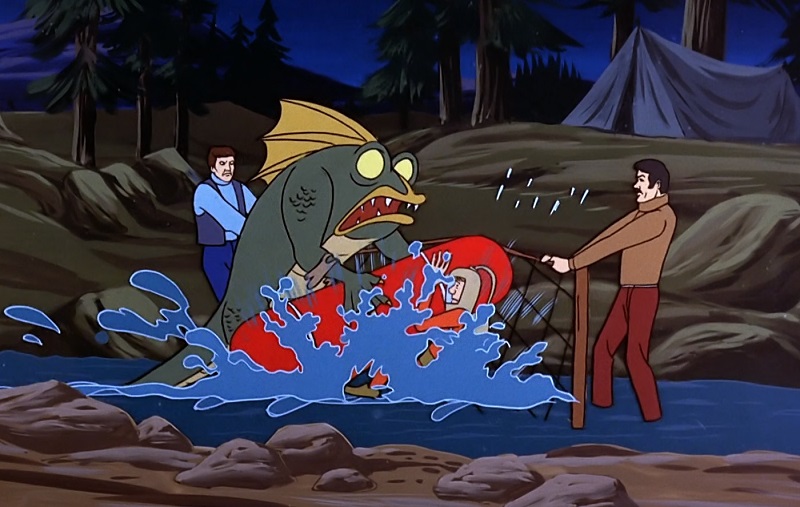 Removing the costume, the gang discover the Beast is Julie. Julie was behind the stolen Yukon gold heist they read about earlier in the outdated newspaper. Velma knew she was behind it all as the cat she claimed was hers was terrified by her. The KL sign they found earlier was from a sign that read Klondike.

The gold was taken to the cabin, then taken to the secret passage. Julie would dive down in the lake and go to a secret tank where the crates were stored, and then sent off in a pipe into a stream on pontoons where her henchmen would catch the Yukon gold. 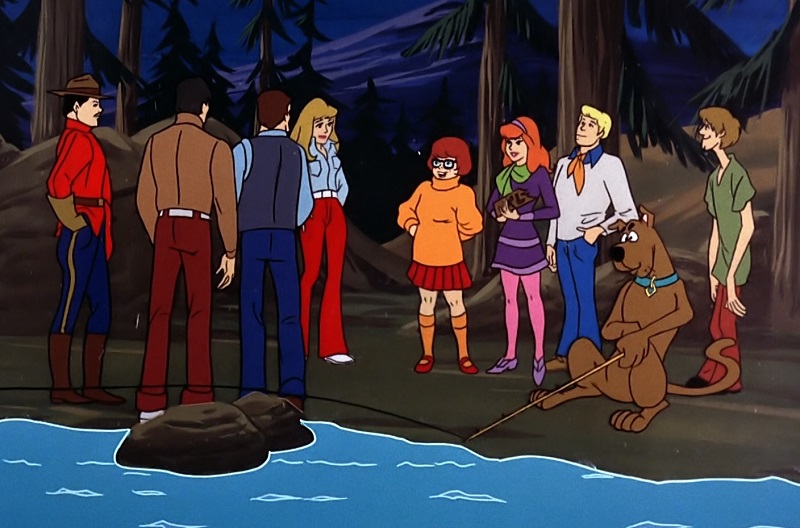 Since the lake was divided by US Canadian border, they could get the gold across without any customs checks. The green clay was used for the explosions they heard earlier so they could make their secret underwater tunnel.

With another mystery solved, this marks the last episode we’ll see before we’re introduced to Scrappy doo.

What I like about this episode is the beast design, and the legend of the bottomless lake. All that stuff is cool. And the beast might be my favourite character design of the season. Heck, I even went out and bought the toy 20 years ago.

Unfortunately, there isn’t much substance to this episode. We mainly get 5 chase scenes between Scooby and Shaggy with some scenes of Freddy and the girls discovering some clues. The episode tries to set up some red hearings with Mr. LaBeau and the cranky Mr. Taylor, but they aren’t done very well.

While it’s nice to see the monster, it never really poses a threat as all it does is growl. The plot is also perhaps a little too complicated. And in a remote town like this, I don’t see families leaving their stores behind, rather, I’d predict they’d hunt the animal down as remote areas in Canada have centuries of hunting traditions behind them.

Overall, it’s an okay episode, but it’s generic and formulaic. It is cool we get a Female Villain though. It’s not my least favourite episode, but I’m guessing it’s in my bottom five.

We’ll find out next week where it stands as I’ll be doing my season 3 ranking. Until then, Stay Spooky!

A Creepy Tangle in the Bermuda Triangle