The Creepy Creature of Vulture’s Claw is the 10th episode of Season 3 and originally aired on November 11, 1978.

In this episode we see the gang on the property of Vulture’s Claw Botanical Garden where they are popping in to see Professor Grier, a friend of Velma’s. They arrive at night and unannounced, so it’s certainly a surprise to the Professor.

The gang are also surprised, as they run into a seven foot tall Praying Mantis!

Not much Trivia here, except that this is the only episode where Daphne and Velma sit together in the back of the Mystery Machine. Usually it’s just Scooby or Shaggy and Scooby. This episode also pokes fun at Freddy’s traps, and we see that Shaggy has a trap manual with all sorts of traps to capture ghosts, giant bugs and sea monsters.

The episode begins with a cool overhead shot of a peninsula of some sort in the shape of a vulture’s claw. We zoom in a bit and are brought to a gigantic mansion where the postman is knocking on the door. The postman is looking for Professor Grier, but is soon scared away when a giant human shaped praying mantis emerges from the bushes. 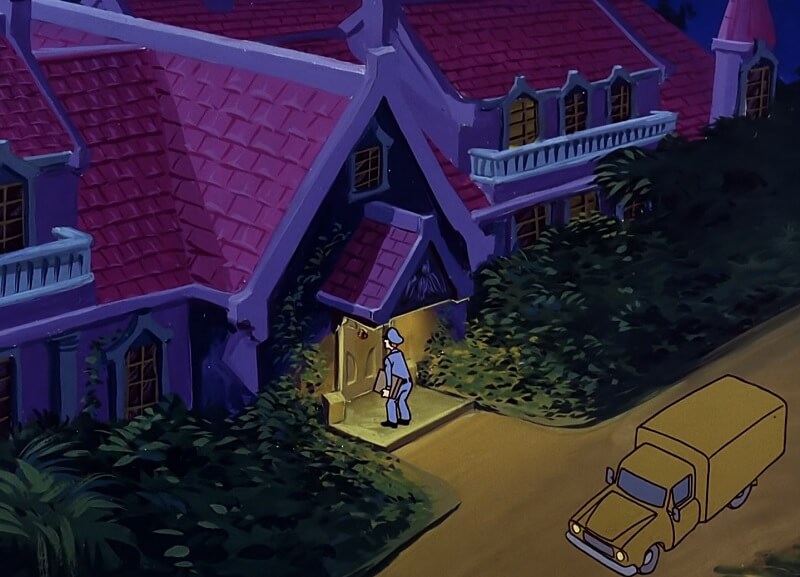 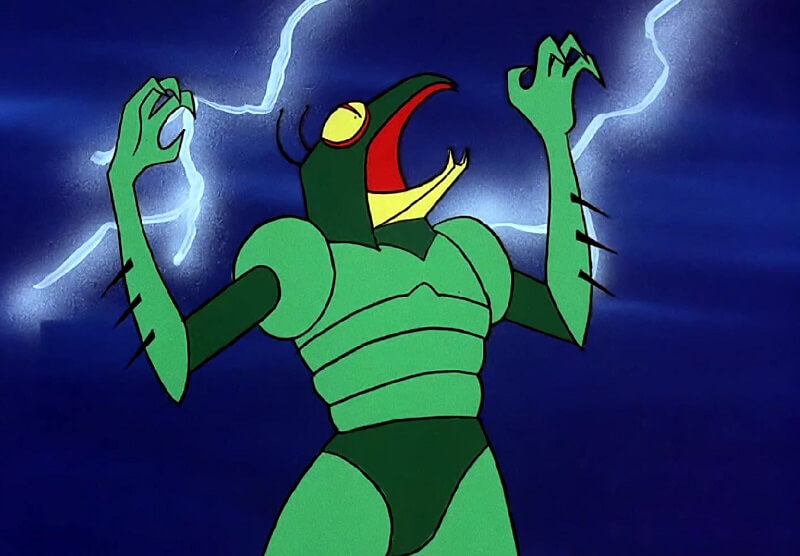 The postman tries to drive off, but his truck will not start. We get some cool shots of the Creepy Creature, and then we cut to the Mystery Machine.

Shaggy’s a little worried about the name Vulture’s Claw Botanical Gardens as they look at a map to see if they are close. And close they are, as the panicked postal driver nearly sends them off the side of the road with his hurried driving. 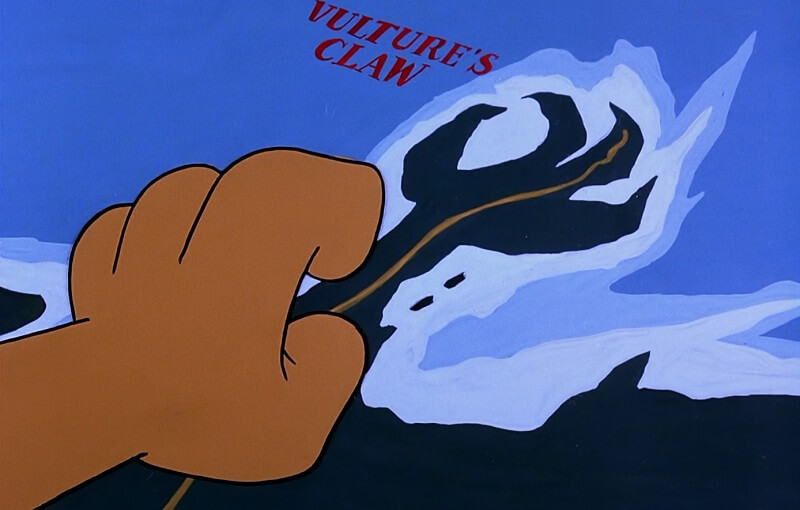 Stopping the mystery machine to collect their breath from the close call, Freddy spots the gate to Vulture’s Claw Botanical Gardens. Velma figures out the truck was in an awful hurry to get away from this place. 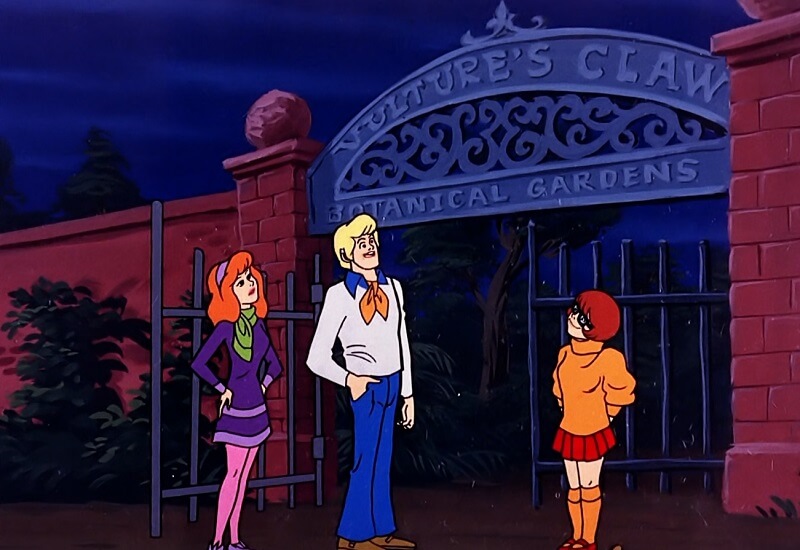 Outside the gates, they also meet an angry man who shouts at the gang for Trespassing. The gang explain they are there to meet Professor Grier as he’s a friend of Velma, and the Caretaker – Harry Kiebal, reveals that he’s been the caretaker there for the past 20 years and that they should leave and take Professor Grier with them.

Walking into the gardens Keeble mutters there’s something loose in the gardens. Something big and something evil.

Walking into the gardens, Scooby and Shaggy get separated and run into the creepy creature. A small chase occurs and they hook back up with the gang where they explain that there’s a seven foot tall bug in the garden.

In the Mansion, the gang head down to the basement where he explains the Creature came out when he took over the Botanical Gardens. In the basement, Professor Grier shows the gang a secret science lab where he found one science entry where a failed science experiment happened that turned a man into giant praying mantis. 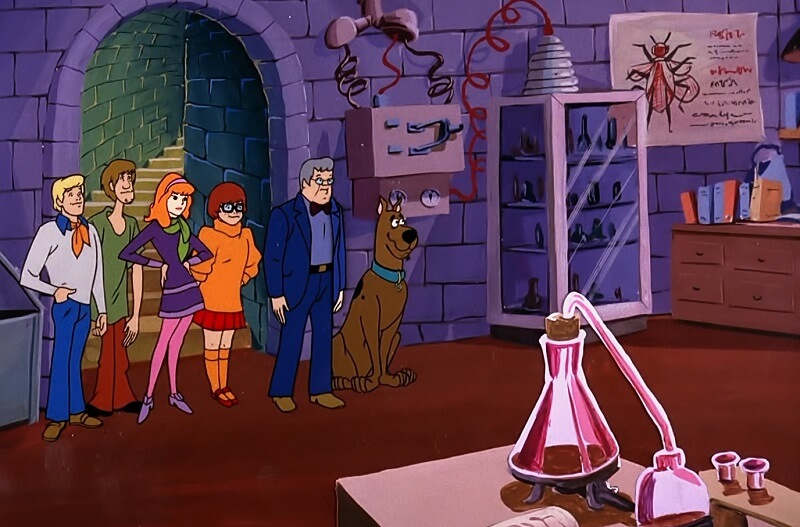 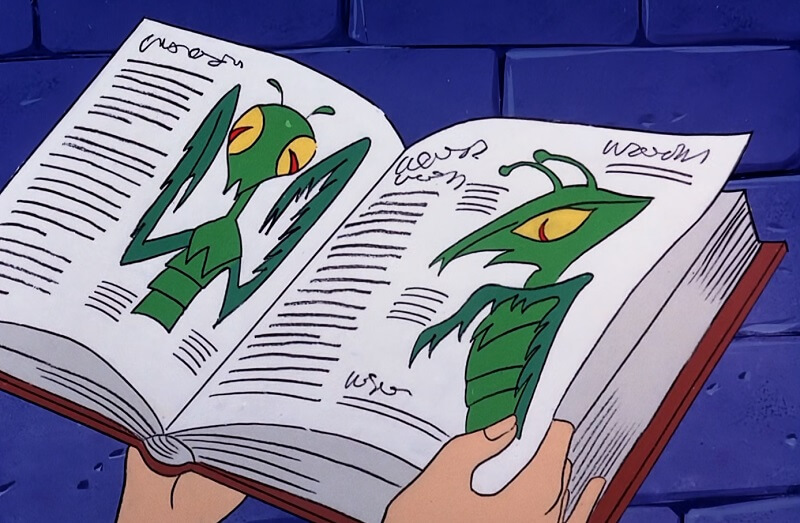 At the same time, we see a man eavesdropping on the gang, and a mishap causes Scooby to run into him. Caught in the act of eavesdropping, the professor explains that this is Clive Dickerman, a real estate agent who has been trying to buy the property.

With the creature running around, Dickerman suggests the Professor should sell the land. Professor Grier explains he doesn’t own the property yet, and wouldn’t be able to sell it. He also does not want Dickerman to get the property as he’d just build houses on the land, ruining the natural landscape.

Grier tells the gang to spend the night, so Scooby and Shaggy head off to bed while Fred and the girls go outside to look around.

Shaggy’s plan to hide out in the bedroom fails as Scooby and Shaggy run into the Mantis creature. We get our typical Scooby and Shaggy chase scene jijinx for several scenes until they fall into a secret cavern. There they find some sticky goop, and are chased out by an angry alligator. In the episode they say crocodile, but given that this creature is in a tunnel/basement, it’s probably an alligator as crocodiles tend to stick near large bodies of water.

In the basement, Velma examines the diary entry and explains that something else is bothering her, but she can’t put her finger on it. Freddy says it’s weird that there is no identification on who’s diary it is which is strange.

From the bookshelf, the Professor’s Assistant, Eric Arby emerges. Eric Arby ran off when the Creature came, but came back to help out the professor. Freddy takes a dig at Eric and mocks him for hiding, but Daphne suggests they all work together.

Velma looks at the scientist equipment and notices nothing is even connected. On cue, Shaggy and Scooby emerge from a secret passage and complain about all the terrors they’ve overcome.

The creepy Mantis creature growls and Eric Arby runs off. Chasing after him, the gang run upstairs where Daphne is snatched by the Mantis. Freddy figures out the place is a maze of corridors, so they wake up Professor Grier so he can help. 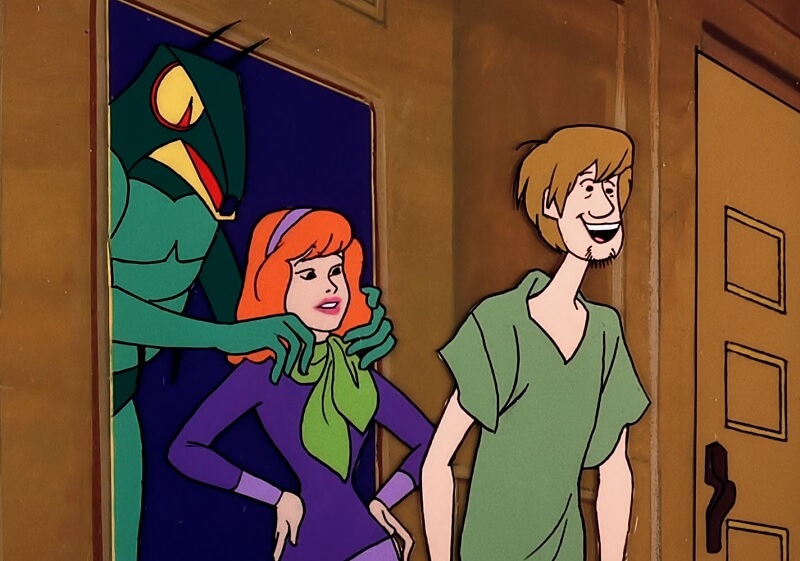 Looking outside, the gang spot something moving in the garden and run out as Professor Grier promises to help as he changes.

The gang nab the floating light they spotted and they have captured Dickerman, the real estate agent. Dickerman runs off and the Praying Mantis creature emerges which chases Freddy, Velma, Scooby and Shaggy into the caretaker’s cabin. 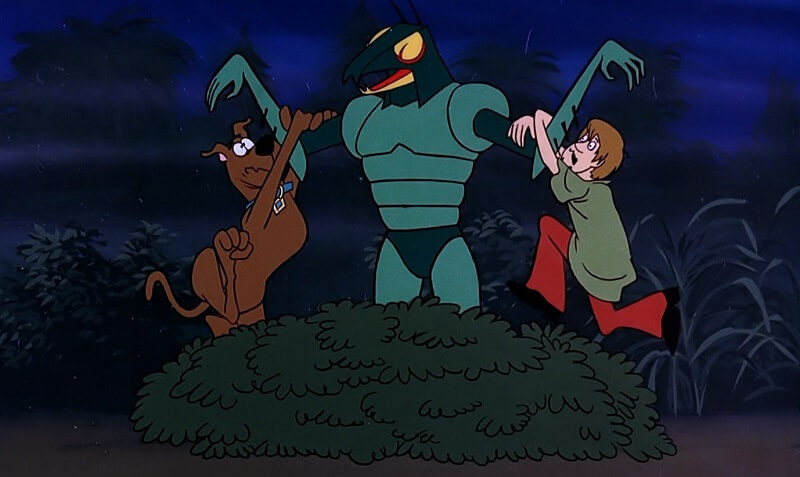 The gang find Daphne in a closet and untie her. The Caretaker the walks in and once again tells the gang to take the professor with them and get the heck out of there.

The Mantis barges in and Freddy yells out plan 46. Shaggy consults his trap manual, where plan 46 refers to giant insects and traps the Mantis in a chandelier. 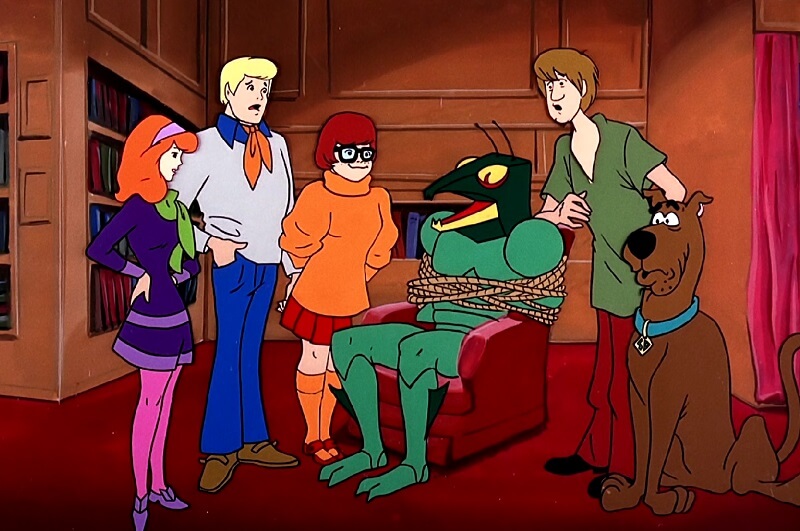 Velma rips off the mask and reveals it’s Professor Grier. She says a real scientist would have had real notes on the experiment, and Freddy chips in that the equipment wasn’t even hooked up.

Velma also reveals that the oily footprints Professor Grier explains that Professor was outside when he was pretending to sleep. The mantis they saw earlier was just a cardboard cutout with some tape recording noises. 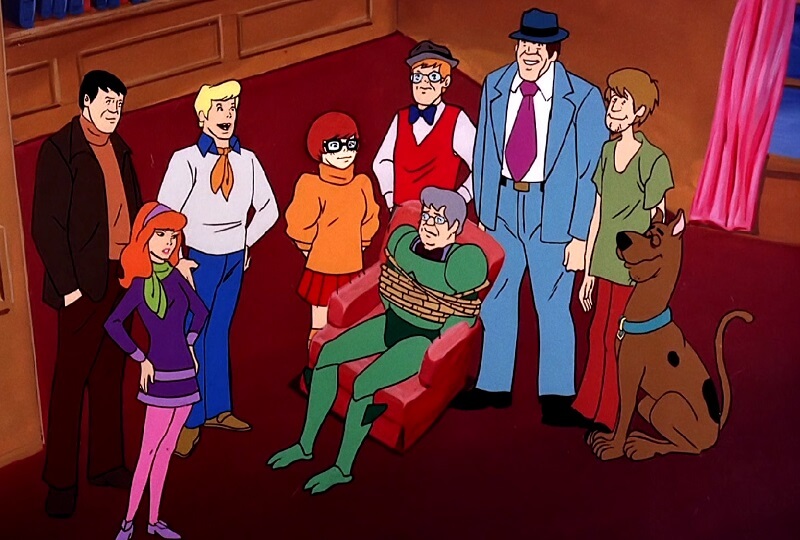 The real estate agent, Dickerman knew there was oil on the property and wanted to buy it. Professor Grier soon found the oil as well after he took over, so in order to buy the property he created the Mantis creature to scare off potential buyers until his deal to acquire the property went through.

Here, we get a unique monster, which, while cartoony, is still creepy looking. The creepy mansion full of secret passages is also quite cool. I also loved all the side characters as they are right out of an Agatha Christie novel. We get the surly caretaker, the shady real estate agent, and the meek but suspicious assistant.

My first time watching this, I had no idea it was Grier, basically because he was a friend of Velma.

The spookiness is also maintained as we get a lot of cool shots of lightning in the background.

I also loved the opening with the postman. We just get some man trying to get his job, by delivering the mail, and instead he’s scared off by a seven foot tall praying mantis.

I’m not sure if this is my top episode of the season, but I’ll get that figured out when I do my ranking episode, which should be out in 5 weeks, as I only have 4 more episodes of season 3 to review.

Until next week, when we will be covering the Diabolical Disc Demon, stay spooky!