A Scary Night with a Snow Beast Fright is episode 3 of the third Season of the Scooby Doo show and originally aired on September 23, 1978.

This episode sees the gang up in the arctic circle where they were invited by Professor Krueger for reasons unknown. When they get up there, the Professor is missing, and apparently kidnapped by a giant snow beast.

I don’t have any trivia for this episode other than we see some totem poles at the village. This didn’t make much sense to me at first as large trees do not grow up in the north pole due to the tundra like climate.

The snow beast size changes throughout the episode as well. One minute he’s 50 feet tall, the next he’s about 15 feet. Cartoon logic.

A Scary Night with a Snow Beast Fright – Episode Review

The episode begins with a scientist trekking across an arctic landscape. We see him grabbed by a giant furry looking creature that is a cross between a polar bear and a t-rex. 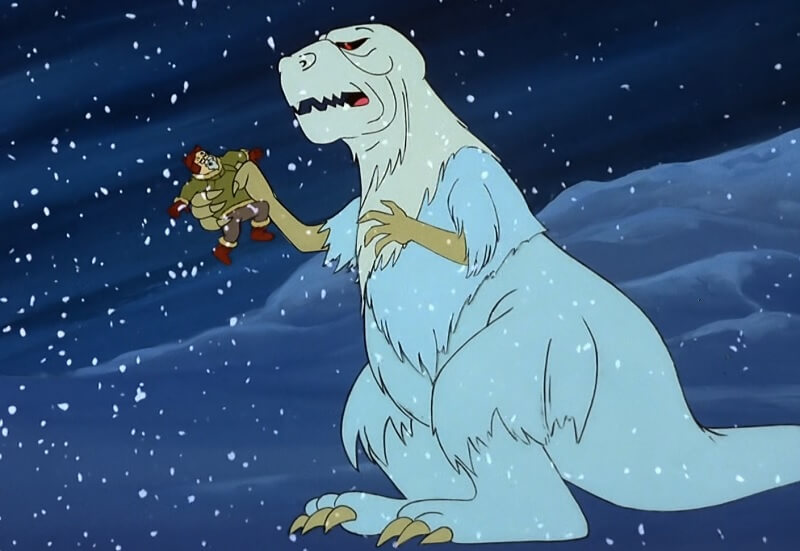 We then cut to the gang who are on an airplane who are reading about Professor Krueger, the man who was just kidnapped. The gang are unaware of his disappearance and were invited to the North Pole to visit him at an Inuit village. 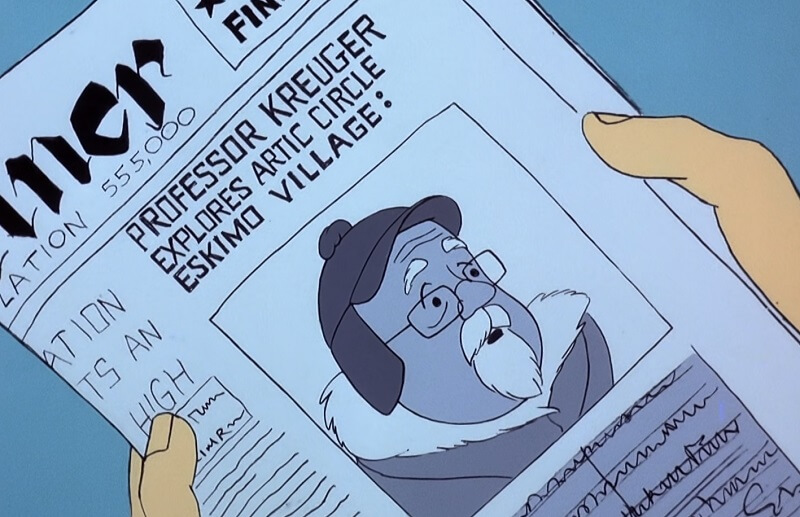 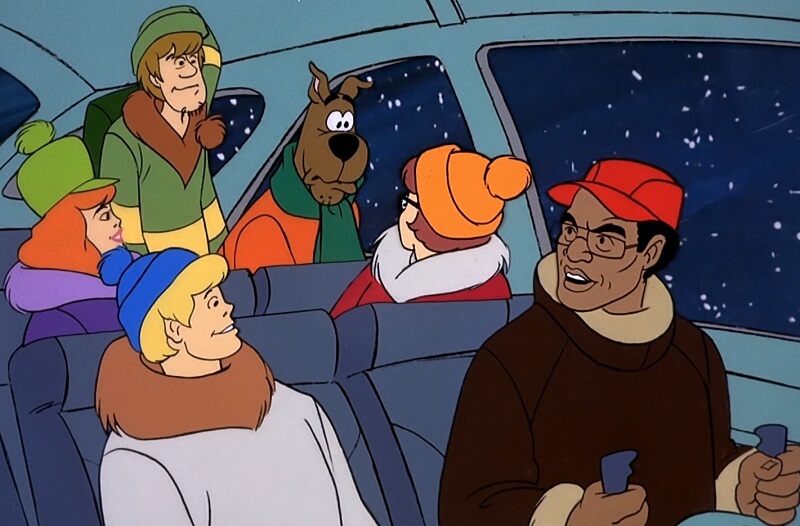 On the airplane ride, we get some super cool shots of some Inuit totem poles that gives Scooby a fright. The pilot mentions that the totem poles are the largest he’s ever seen.

At the Inuit village, the gang put on their skis and make their way through a blizzard to the village. When they get to the village they find igloos smashed to bits like some giant monster stepped on them.

Splitting up they search the remaining igloos and Scooby falls in the giant monster’s footprint. Daphne guesstimates that the monster must be 50 feet tall. 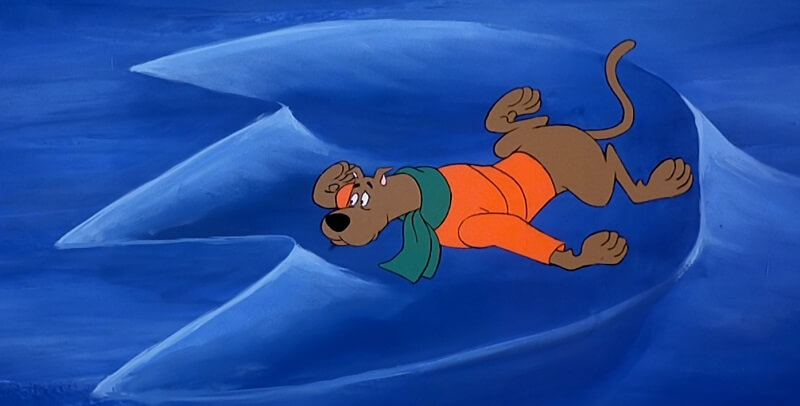 An Inuit with a dog sled approaches the gang and Scooby is smitten by the head dog. The Inuit introduces himself as Manook, the chief of the village. Manook explains the monster carried Professor Krueger off and scared the other villagers away when it smashed all the igloos. Manook also says the Snow Beast says the beast comes to life when man invades the sacred lands of the north. Since they built their Inuit village on the sacred land, they had to leave.

The chief points the gang towards the Professor’s hut and they meet his assistant Jean-Pierre Baptiste who tells them to leave at once before he hops off on his snowmobile. 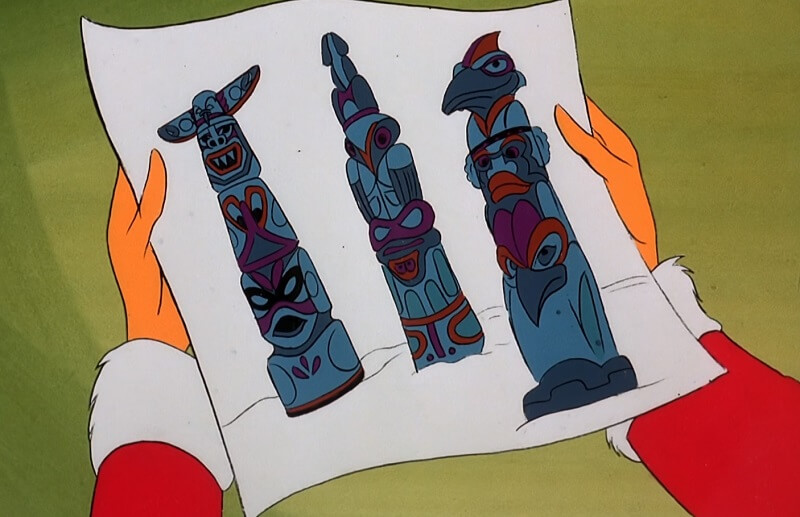 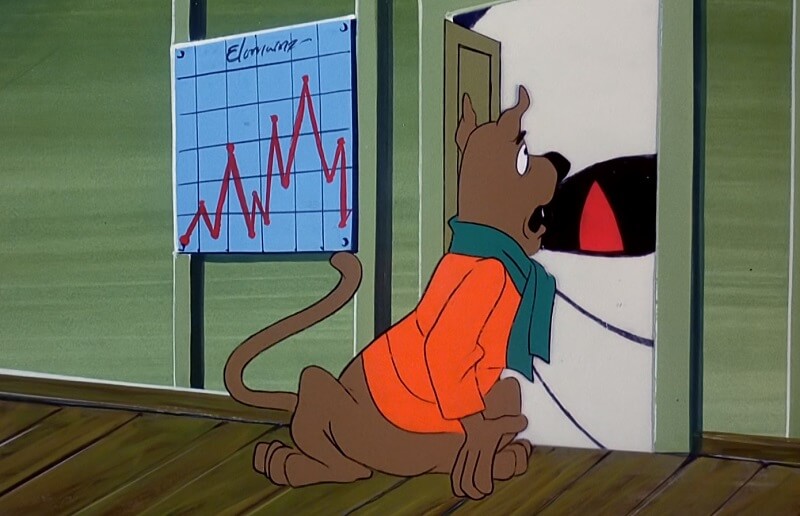 The Snow Beast shows up again and chases Scooby where Scooby hides until it leaves.  This scene is very intense, and reminds me a lot of Jurassic Park.   After a quick moment to catch their breath, the gang follow the snow beast tracks to a cave. 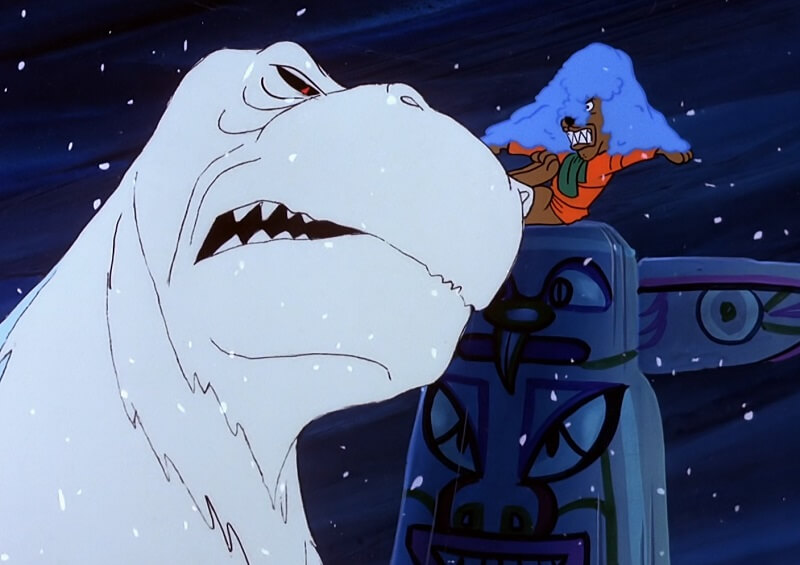 The inside of the cave is icy and treacherous and the gang slip and land in a crevasse. In the pit, they find two tunnels with lights lightening them up. Scooby and Shaggy take one tunnel while the rest of the gang head the other way. 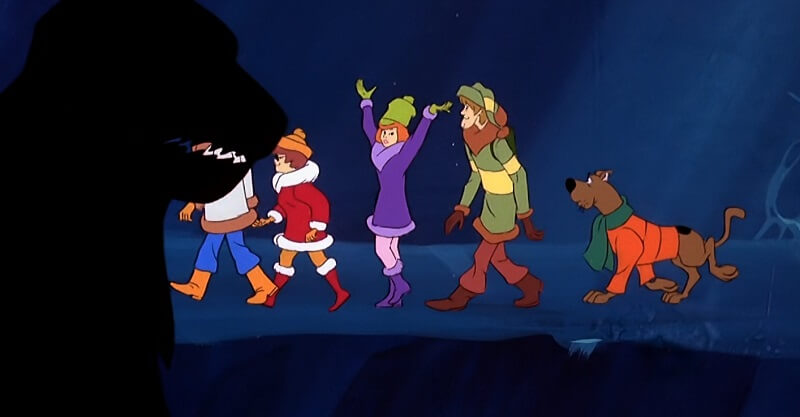 Freddy and the girls determine the tunnels were carved out of ice. They also find a room with submarines and more black snow. 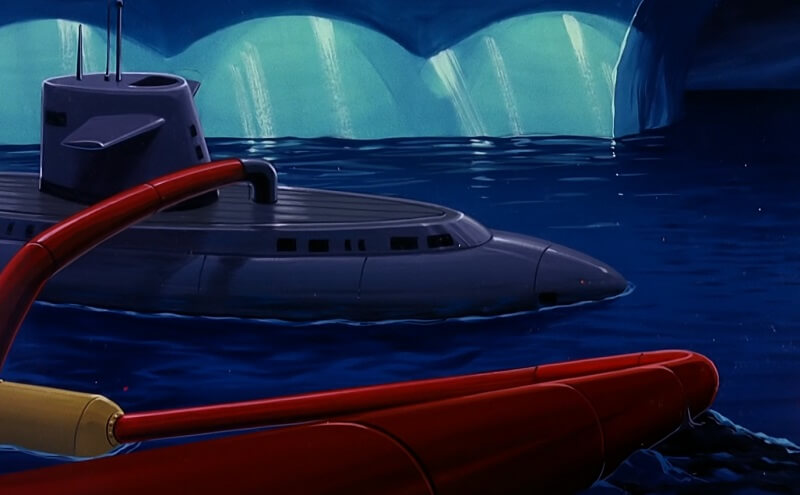 Scooby and Shaggy have worse luck and run into the snow beast, who chases them throughout the cave system.

Going down a set of carved stairs, Freddy, Daphne and Velma find the Professor and Chief Manook. Scooby and Shaggy also run in so everyone is reunited.

Making their way back to the surface by the totem poles, Freddy sets a trap. Here they finally catch the Snow Beast on some slippery ice and it’s revealed to be Jean Pierre Baptist inside a giant mechanical puppet. The totem poles are also revealed to be oil pumps.

Baptiste came across the oil so he hired a mechanic to build the oil pumps during the night. He also used the snow beast legend to scare the Inuit away. Finally, the oil was carried off in submarines. This was all until the professor got suspicious, so Baptiste kidnapped him.

With another mystery solved, the gang head off into the sunset.

So far this is my favorite episode of the season. I enjoyed the North Pole setting and the hidden oil plot. Of course this episode is a little too familiar as we saw submarines used in the previous episode, and cave lairs in the previous two episodes.

The Snow Monster looked cool. I doubt he was very practical as it was 50 feet tall, and even Godzilla was just a man in a rubber suit. But whatever, cartoon logic.

I also thought there were some really stunning shots in this scene like the flyby to the totem poles, the light up cave eyes, and the snow beast watching the gang in the darkness of the cave.

I also dug seeing the gang in their winter clothing, and the Scooby’s love interest subplot was kind of cute.

Join me next week where I’ll be covering “The Tar Monster”. Until then, STAY SPOOKY