A Creepy Tangle in the Bermuda Triangle originally aired on September 16, 1978 and was episode 2 of the third season of the Scooby-Doo Show.

This episode sees the gang involved in the lost airplane mysteries of the Bermuda Triangle, which was known for its UFO lore back in the 70s. Here the gang, who are lost at sea, spot a weather plane that gets captured by a UFO and are confronted by a trio of alien skeleton men, who have skeleton bodies and a giant eyeball for a head.

The Skeleton Men also show up in Scooby-Doo 2 Monsters Unleashed where the costumes are brought to life.

A Creepy Tangle in the Bermuda Triangle – Episode Review

The episode begins with an airplane filing during a lightning storm. They are about to enter the hurricane eye at the center of the Bermuda Triangle. Once in the eye, the storm has calmed down and a huge ufo flies at them. 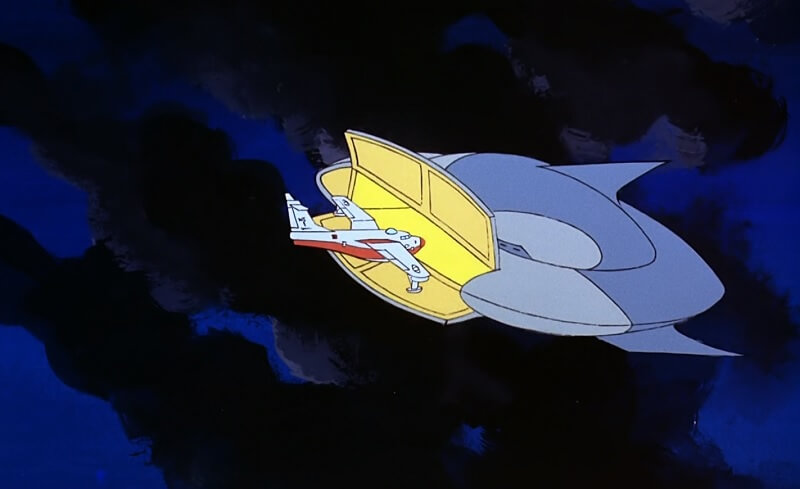 On an airplane base, the air force hears the plane report an UFO and loses contact. Captain Harris asks Dr. Grimsby what happens, but Dr. Grimsley explains that he is only a weather scientist.

Out on a sail boat in the gulf stream, the gang dance and eat snacks. The waves start to get choppy and the wind picks up so the gang start to head back. They also hear on the radio from Miami where a hurricane hunter plane has disappeared in the Bermuda Triangle. 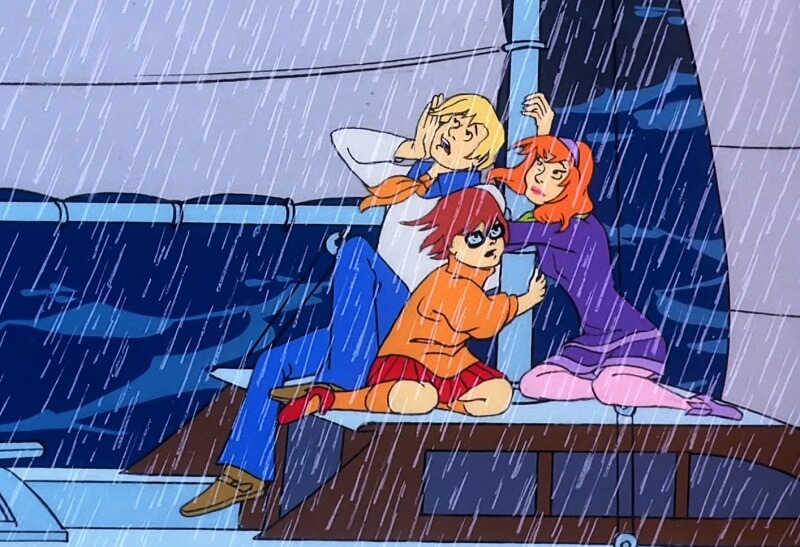 The storm blows the gang into the Bermuda Triangle and they lose their main sail due to a lightning bolt. Drifting, the gang see an airplane in the sky where they see a flying saucer capture the plane. Velma speculates the same thing must have happened to the weather plane.

The storm picks up and the gang crash into a remote island called Diablo Island. Freddy explains that the island is deserted, but below the waves we see a submarine cruise to the island base where two skeleton men swim out and open an iron gate to a cave so the submarine can enter. 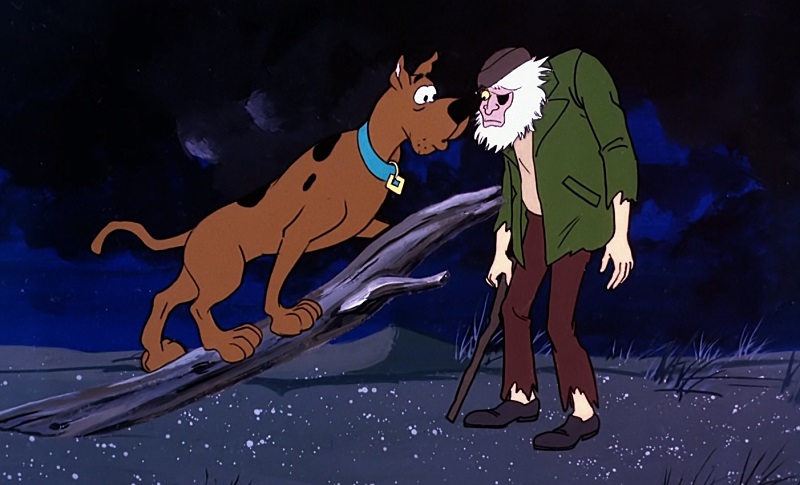 The old man vanishes, but Freddy is intrigued by the riddle of the Bermuda Triangle, so they spit up searching for clues. Velma, Freddy and Daphne head up a cliff, while Scooby and Shaggy stay back to keep the campfire going.

On top of the cliff, Freddy, Daphne and Velma spot an air strip. Daphne trips on something and it’s revealed to be a smudge pot. An old fashioned lighting device to help airplanes land. As it’s still warm it has been used recently. Velma sees two long rows of old fashioned smudge pots. 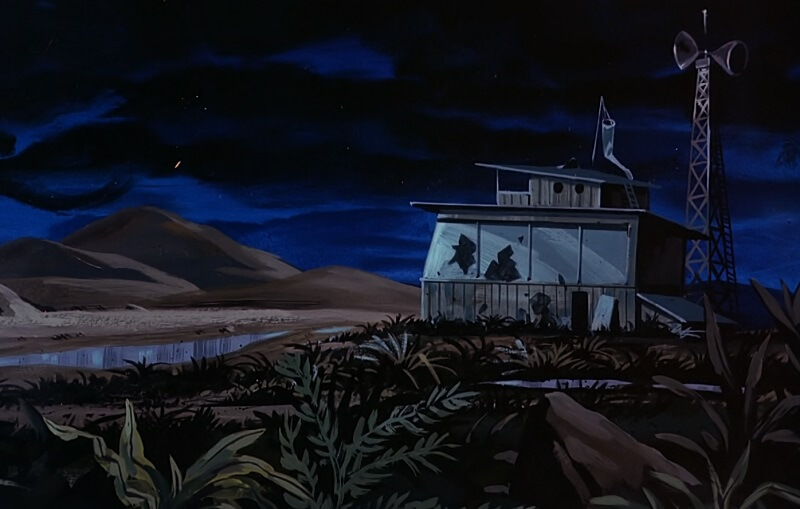 Inside the airfield building they find modern equipment such as direction finders, radar, and more. The building itself is dilapidated but the equipment is brand new. Outside, Daphne notices the wheel tracks from the airplanes lead directly into a mountain, so the gang go outside and investigate. 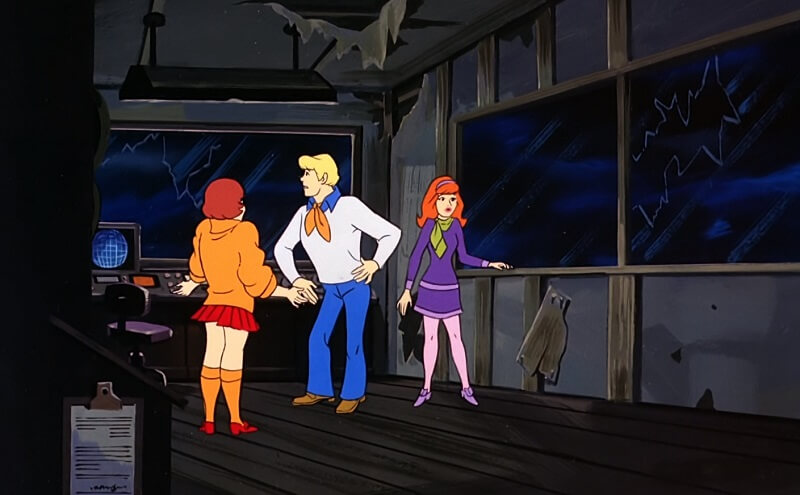 Shaggy and Scooby dig for clams and are confronted by three Skeleton Men who ruin Shaggy’s plan for fresh clam chowder. The cowardly pair run off and climb into an old ventilator that brings them into the cave system where there’s a dock and a submarine. 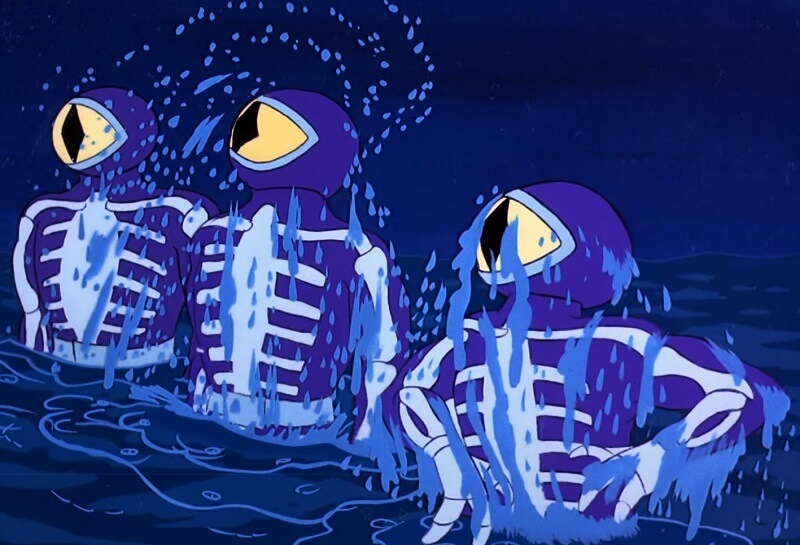 Back to Freddy and the girls, Freddy opens the cliff door that brings them to a hanger. Velma also realizes the cliff is fake as it’s made from plaster.

Boarding an airplane, Freddy tries out the airplane radio where they chat with Dr. Grimsley and explain that the vanished airplanes are in an underground bunker. Dr. Grimsley is shocked and tells them to stay put as he’s sending help immediately. Outside the airplane, Daphne notices that they are being repainted. Looking for more clues, the three enter a shipping container and end up locked inside. Even worse, the container is filling up with water from a grate down below. 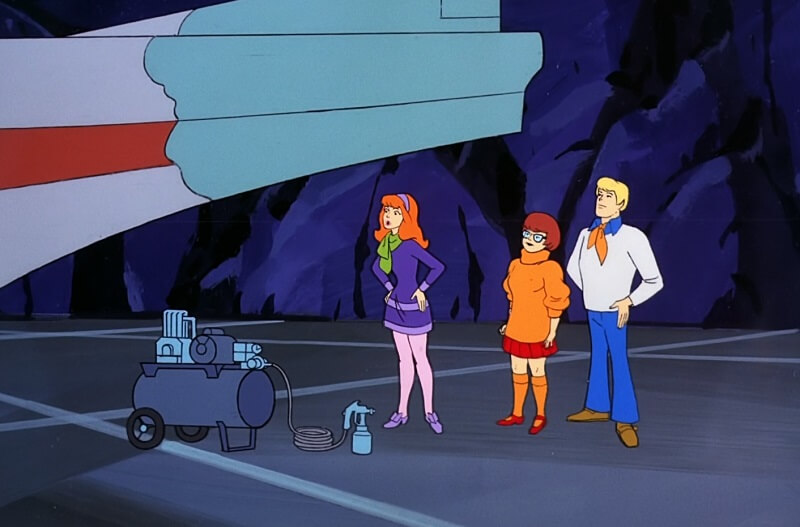 Meanwhile, Shaggy and Scooby find themselves in trouble after boarding the submarine as they are chased by the skeleton men. Shaggy notices the submarine has a skylight which seems to be a little crazy.

In order to hide from the skeleton men, Scooby hides in a torpedo loading area and is accidentally launched by Shaggy into the water. Shaggy also finds the missing pilots but before he can free them, the Skeleton men take chase. In his efforts to run away, Shaggy hits a projector button where the UFO image is projected through the submarine’s skylight. 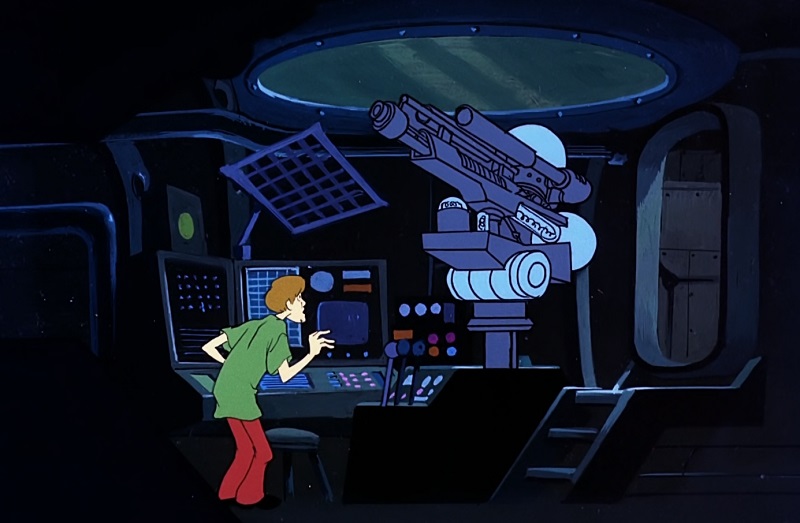 We then cut back to the gang where a ladder drops down and rescues Freddy, Daphne and Velma. The gang never see who rescues them, but Velma thinks she knows who it is. While out searching for more clues, the three see the projected UFO image in the cave system. They also find Scooby who runs out to rescue Shaggy from the skeleton men. 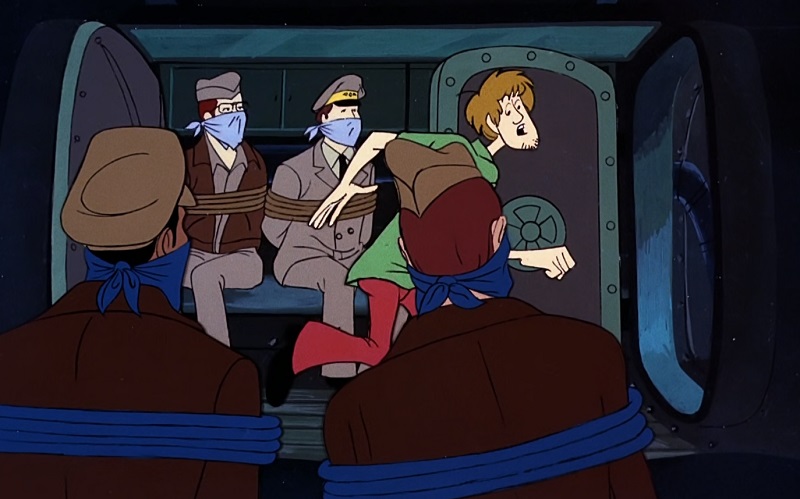 Shaggy runs back to rescue the tied up pilots but find the old sea dog who warned them off the island before. It turns out the man is Commander Stern of Navy Intelligence in disguise. It was him who saved them from the flooding container. 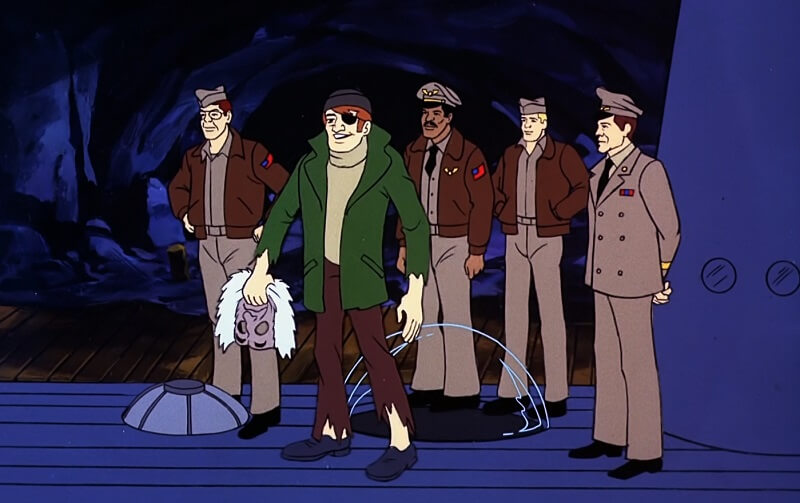 Freddy explains the saucer is a fake holographic image that made it look like a UFO was swallowing up planes. The planes were then taken over by remote control and then flown to the remote island where they were repainted and sold overseas. 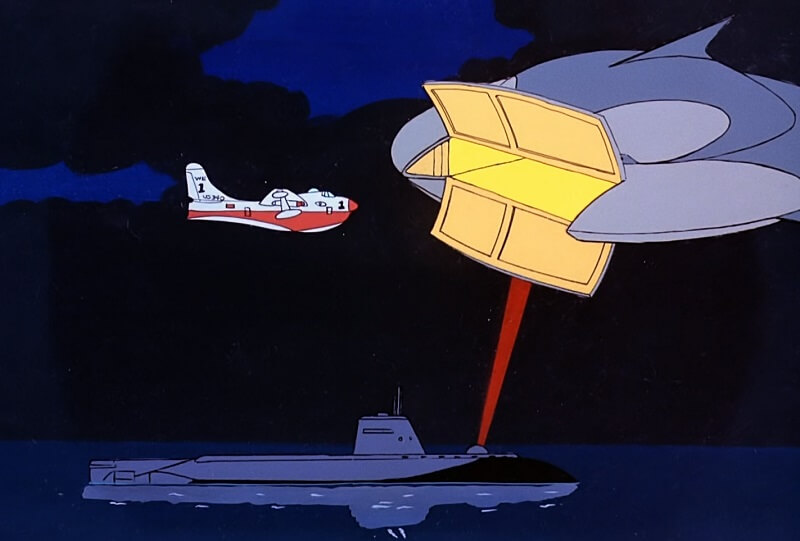 Freddy unmasks the three skeleton men and the head henchmen is Dr. Grimsley, head of the weather eye project as he always knew when the planes were flying. 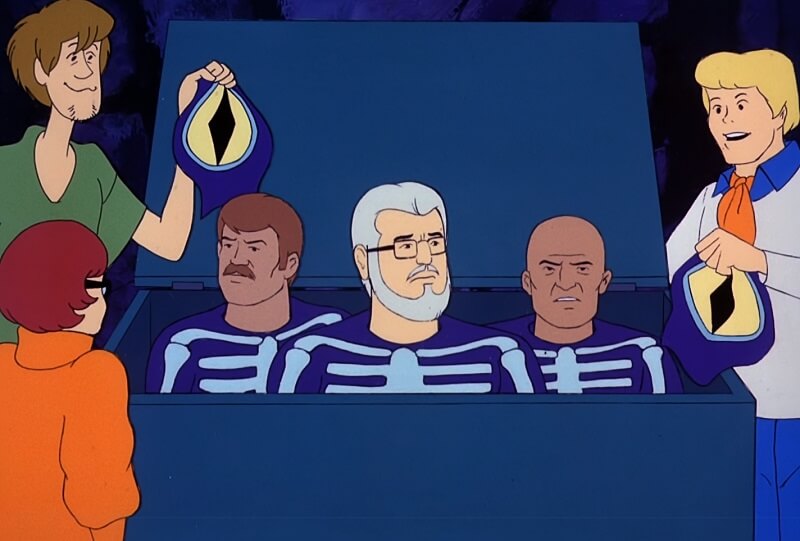 Since their sailboat was ruined, the gang head back to the States aboard a submarine, where Scooby enjoys a Submarine sandwich.

The Skeleton men look cool, but they don’t have much to do other than take chase. It’s also pretty clear that they are just men in wetsuits, so they are not very scary.

What I like about this episode is its take on UFOS and the Bermuda triangle. I also like the twist where Dr. Grimsley was the main bad guy and the gang communicated with him asking for help earlier. 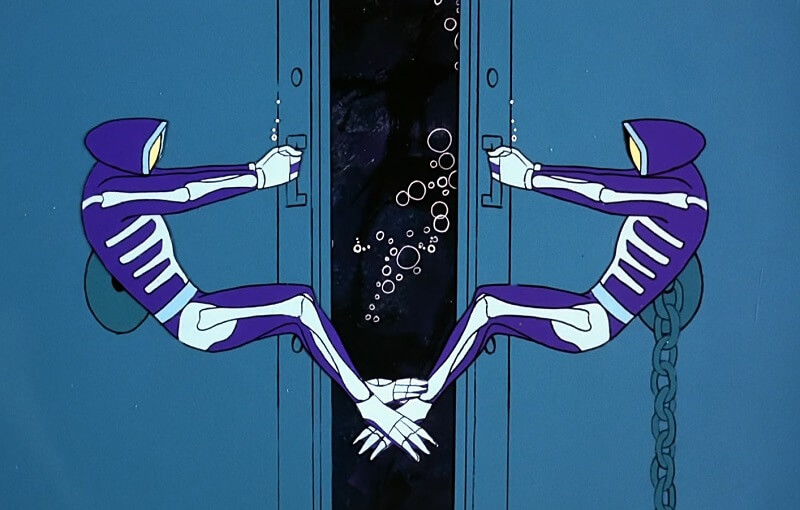 Of course, this doesn’t make sense, as 3 skeleton men were chasing Shaggy and Scooby at the same time, and if Dr. Grimsley was one of them, he wouldn’t have been offshore to answer Freddy and the girls call for help. But whatever, cartoon logic.

Otherwise, the plot is somewhat recycled with the underground cave system which we saw in the Secret of Shark Island where the bad guys are also caught with a crane. The whole stealing of vehicles and repainting them was also done previously in other episodes such as The Ghost of Bigfoot, or the spooky case of the grand prix race.

Overall though, this is a fun episode light on spookiness, but strong enough with some fun action scenes and some science fiction which we rarely got in these earlier episodes of Scooby-Doo.

Once again, thank you for any likes, subscribes and views. It means a lot to me, and helps my channel grow so other people are able to check it out. Join me next week when I’ll be covering A Scary Night with a Snow Beast Fright.

Until then, stay spooky!