The Chinese Fortune Kooky Caper originally aired on November 25, 1978 as part of the Scooby’s All Stars and sees the gang visiting China where they run into the Legendary Moon Monster of Rampoo.

We never know where the gang are heading as they conveniently get a flat tire in front of a palace where the Moon Monster is reported to wander. There they meet Kim Chow Ling who is inheriting some Family Jewels when he turns 25 the next day, and he’s advised to toss the Jewels into the bay, or else be forever cursed by the Moon Monster.

While I was familiar with this episode, it was never one that stayed on my radar. I never heard Scooby fans talk about this one all that much either. Is it a hidden gem, or a lump of coal? Let’s find out.

The episode begins with some cool shots of a Chinese Village with a full moon high in the sky. Near a bridge, a furry glowing monster with Asian decorative art peers into the water and roars. 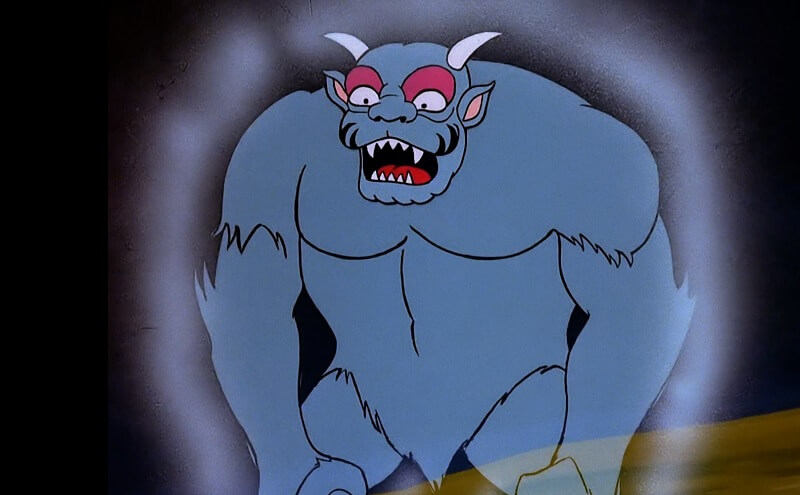 In the Mystery Machine, Daphne is excited to be in China. Shaggy reads a Chinese menu to familiarize himself with the local language. 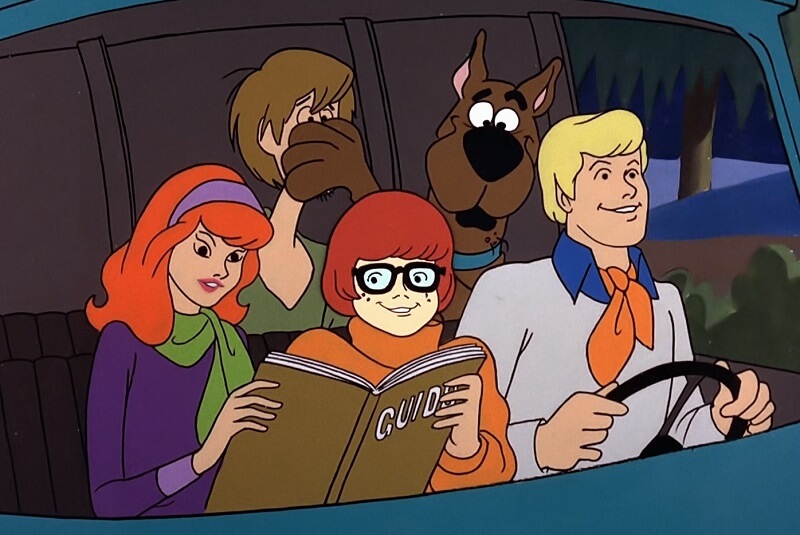 Velma explains they’ve missed a turn, and points at a Map explaining they are in Rampoo. Reading her guide book, Daphne reads about a Moon Monster that came to earth on a Moon Beam which entered the Palace of Rampoo and turned everyone into stone who’s shadow it fell on. 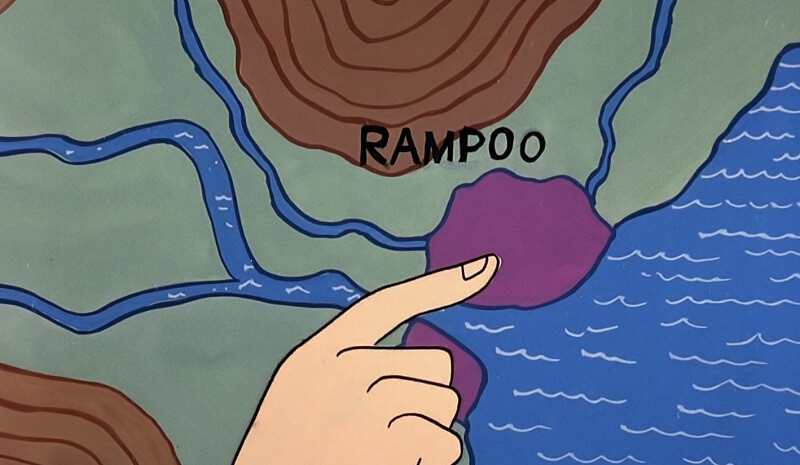 The Mystery Machine blows a tire right in front of the Palace of Rampoo, so Freddy decides to spend the night at the Palace and fix the tire in the morning.

Shaggy and Scooby want none of this, so Shaggy does his best to fix the tire. As he attempts to repair the mystery machine, the Moon Monster appears and frightens our cowardly duo. 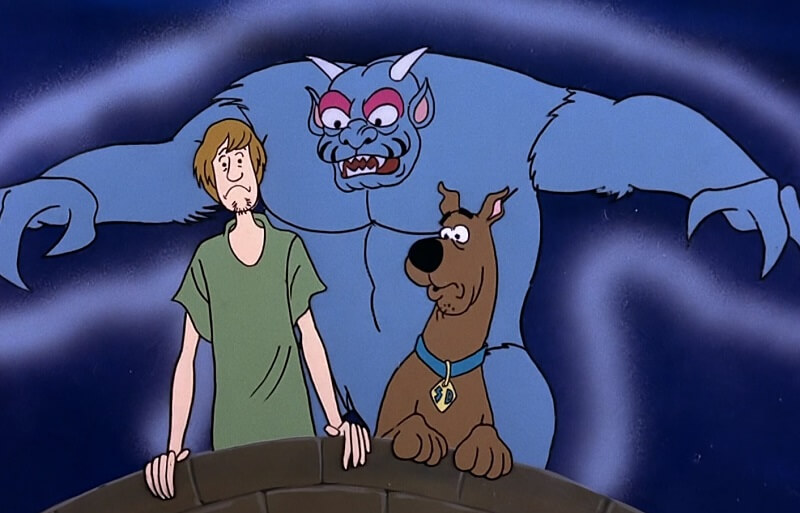 Shaggy and Scooby both faint and wake up in the Palace. We are introduced to Lenn Foo and Kim Chow Ling. Kim Chow Ling is an American and the new owner of the Palace and is curious about Shaggy’s fable.

Kim then suggests that the full moon played tricks on Shaggy’s mind and that the moon monster is a fable. Kim introduces the Gang to Chin Wong Sing, his uncle. Mr. Sing explains they are in a period of celebration. Upon turning 25 Kim is going to receive his family’s priceless jewels and gold.

Lenn Foo explains the jewels are cursed and Kim needs to get rid of them, or else everyone in the palace is doomed.

Spending the night, the Moon Monster frightens Scooby and Shaggy once more, and after some hijinks they get away. 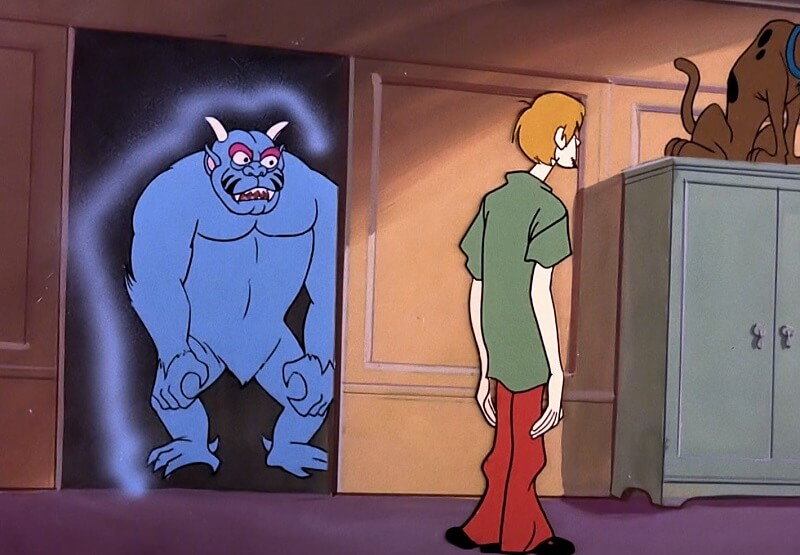 Kim shows Shaggy and Scooby the treasures, and explains he has to throw all the jewels and gold in the bay, or else the curse remains. 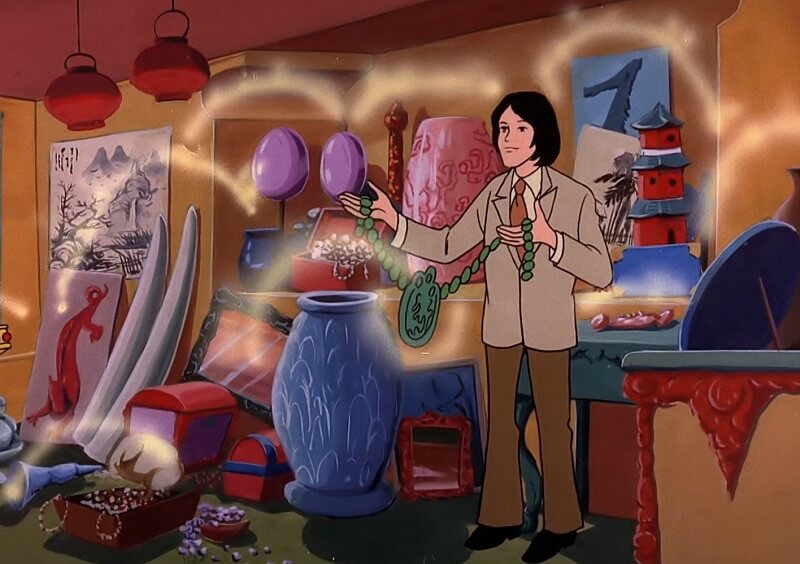 The dinner gong goes off at 2am and Shaggy runs to the kitchen where they find the Moon Monster along with Uncle Chin turned to stone. Velma’s not fooled, as she finds some grease streaks on the floor. 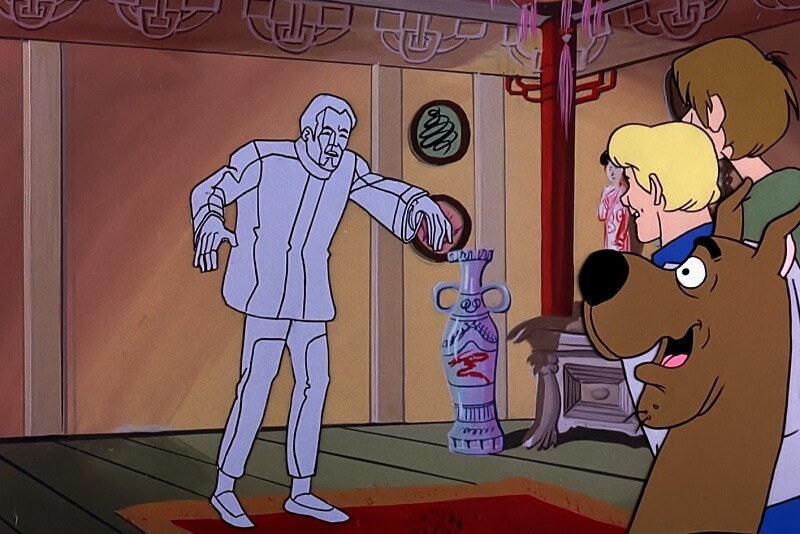 In Uncle Chin’s room, Kim show’s off his Uncle’s ancient tools that he was collecting. As some lightning strikes, Lenn Foo once more shows up and tells Kim to get rid of his treasures.
Back outside, Freddy, Daphne and Velma investigate the Bay by getting in a boat to see if they can find how the Moon Monster escaped. Shaggy and Scooby are instructed to investigate the Palace grounds. 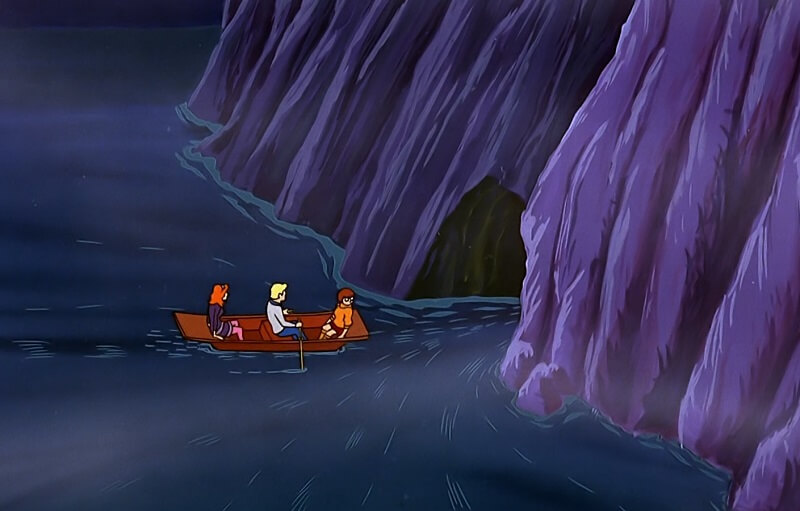 In the water, Freddy gets caught in a current and are forced into a cave by some waves. Over the years, the waves have brought in lots of junk. Inside the cave they find a tunnel, which they set off to explore

Back on the Palace Grounds, Scooby and Shaggy run into the Moon Monster for a 3rd time. The glowing furry beast takes chase and we get more kooky hijinks until they escape into the palace.

While hiding in the palace they see a secret door shaking, so they press on it and as the door turns Freddy, Daphne and Velma emerge. In the moment of confusion, Shaggy and Scooby spill a jar of flour and it turns out the pair are glowing. The flour is some sort of fluorescent powder.

Kim decides to throw the jewels in the Bay to fulfill the ancient legend and rid themselves of the monster. Freddy agrees, but he wants to throw the treasure into the bay as a trap. 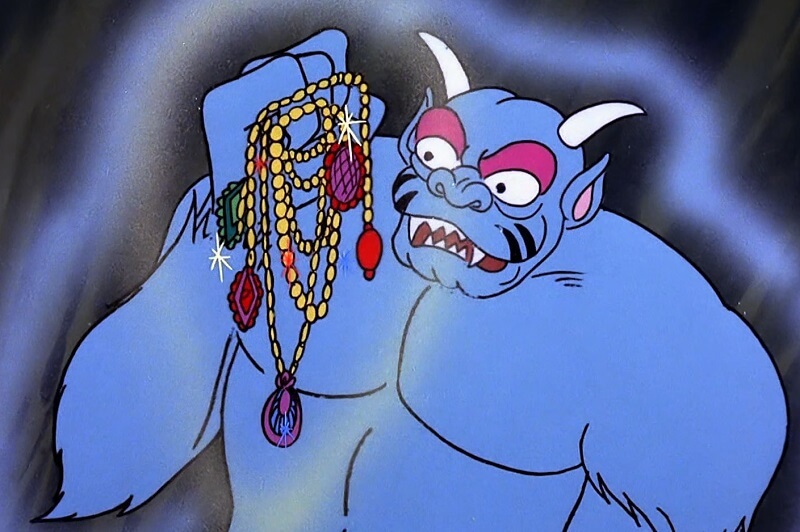 Freddy and the girls take chase, and back outside on the Palace Bridge, Shaggy and Scooby knock the Moon Monster into the water. With the jewels safe and the monster caught, Velma unmasked the Moon Monster.

The Moon Monster turns out to be Uncle Chin who wanted the treasure for himself. Uncle Chin faked the statue that he carved using his ancient carving tools. The grease marks were how he pushed the statue from the secret passage. 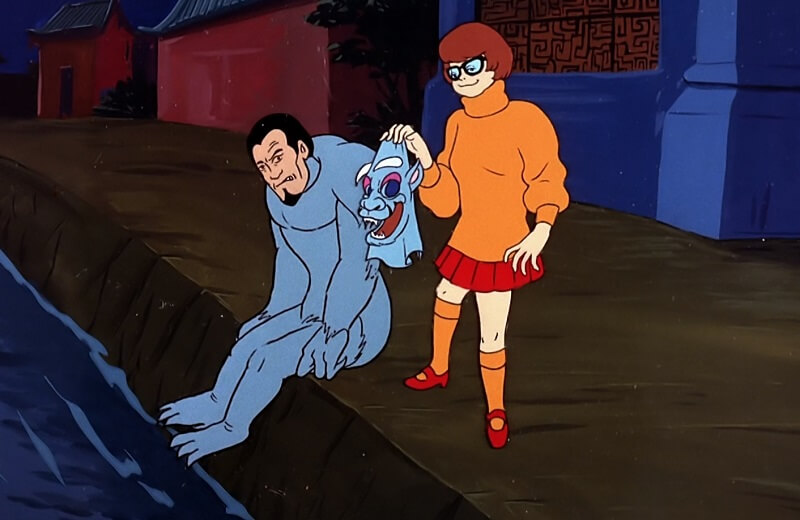 Uncle Chin knew that the tides would wash anything thrown into the bay back into the cave, so all he had to do was wait in the cave for them to arrive, steal them and escape. 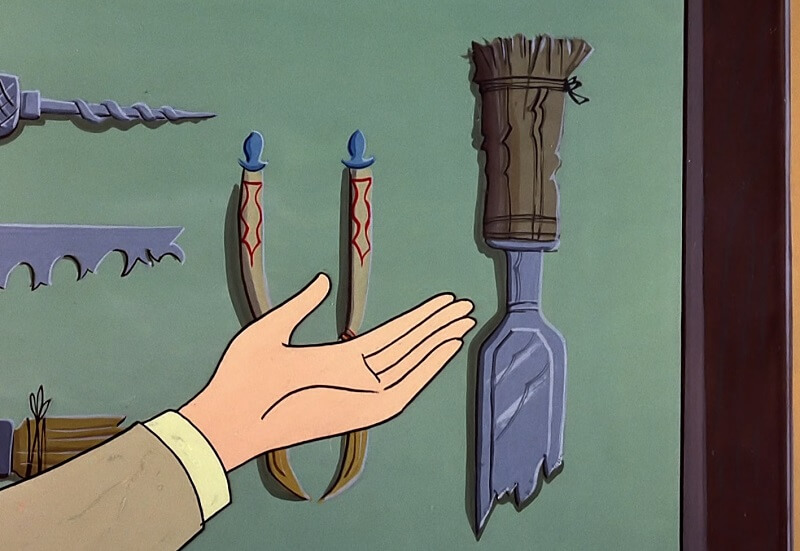 With another Mystery solved, the gang head off on their next adventure.

The Moon Monster looks cool enough, and while he made Shaggy and Scooby faint, I didn’t find him that incredibly frightening. While the design does look cool, he just looks like a man in a body suit.

I liked that they were in China but you could tell the writers knew very little about Chinese culture or lore. This basically made the Scooby-Doo episode feel like any other episode of Scooby Doo, and what could have turned out to be great, ended up rather generic and hum drum.

While we did get some cool Velma, Daphne and Freddy scenes, there’s no chemistry or life to them as they just wander around looking for clues.

With Scooby and Shaggy we get the same formulaic interludes where we get the comedic gags.

Formulaic is the key word here, as that’s what this episode feels like, and the plot is interchangeable with so many other Scooby Doo episodes.

I suppose the writers realized this too, as next season Scrappy Doo would be introduced to freshen things up. 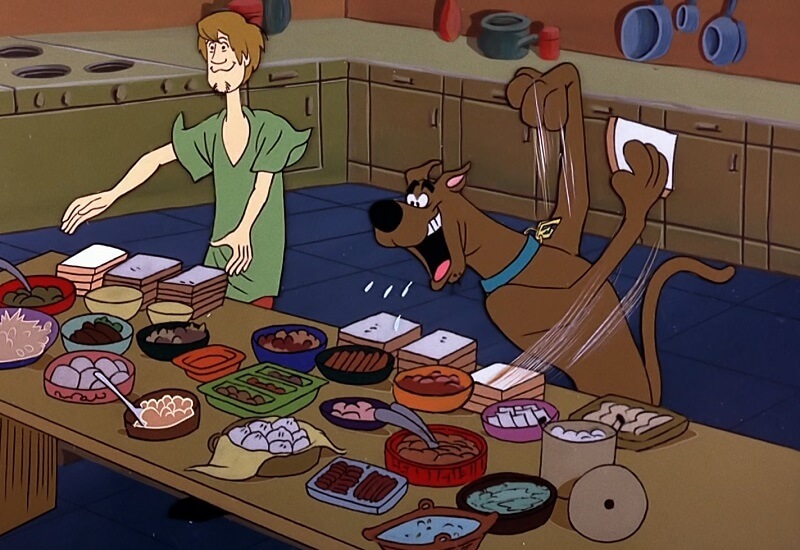 Still, I didn’t hate this episode, and it was a pretty good time. I appreciate the change in location, but much like Americanized Chinese Food, this episode will leave you hungry a couple hours after watching it.

Anyway thanks for your likes, views and subscribes. I have two more episodes to review, and then I’ll have my ranking of episodes. This one won’t be my least favourite, but I’m pretty sure it will be in the bottom 5.

Until next week, when I will be covering A Menace in Venice, STAY SPOOKY

Make a Beeline Away from that Feline