A Menace in Venice is the 13th episode of the Scooby-Doo Show season 3 and originally aired on December 2, 1978.

This episode sees the gang in Venice, where they are visiting a pal named Antonio who is being haunted by an ancestor named the Ghostly Gondolier who is after an ancient necklace he wears.

Not much in the way of trivia here, other than Antonio owns a pizza parlor called Merchant Venice Pizza, so you know Scooby and Shaggy are happy to visit. Antonio is also a descendant of Doge Malvolio the 4th, which might be a reference to Shakespeare’s Twelfth Night.

This episode tends to be a fan favourite, but is it the best of this season? Let’s find out. 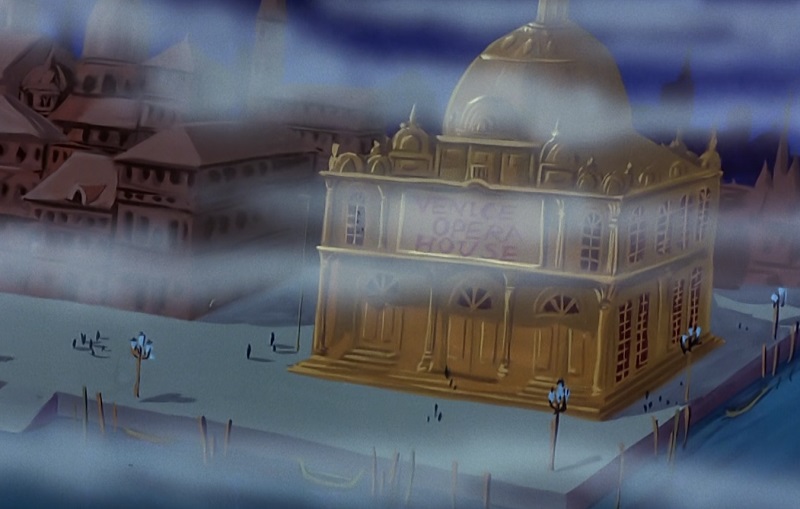 A Menace in Venice – Episode Review

The episode begins with a cool shot of an Opera House in Venice, and inside we see a stage where a statue by the name of Doge Malvolio IV is wearing a necklace. We later learn that the Doge built the Opera House. 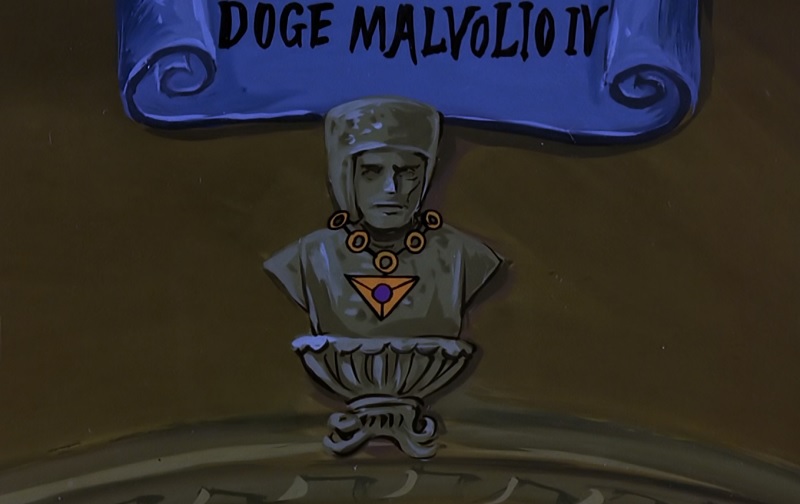 Soon, the Ghostly Gondolier appears and interrupts a play rehearsal and swings from a balcony to swipe the necklace. Running out, he escapes in his boat

Meanwhile, the gang are on a dock waiting for a boat. They’ve brought the Mystery Machine with them, and it is packed with luggage. My first instinct was to guess it was mostly Daphne’s luggage. But who am I kidding, it’s probably Scooby and Shaggy’s and packed with snacks.

There’s so much luggage, the gang need two boats, so Scooby subs in as a Gondolier. In the fog, Scooby and Shaggy get separated, and they see their first sighting of the Ghostly Gondolier. 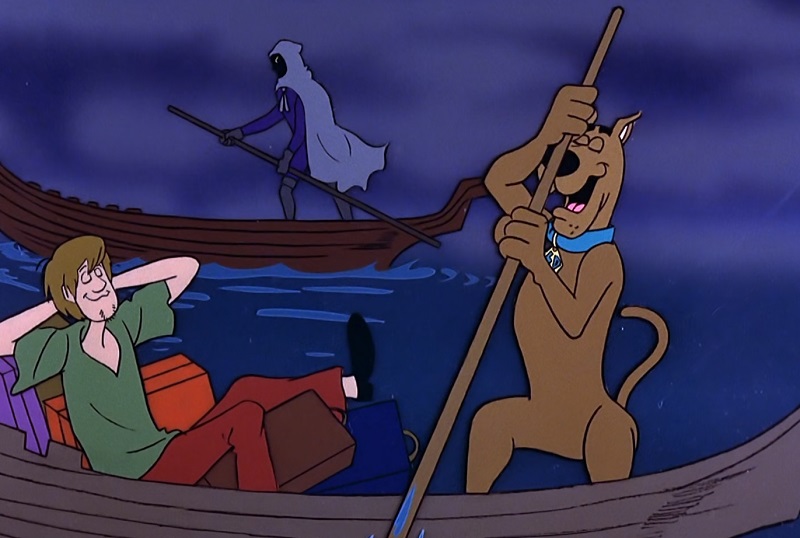 Making double time, Scooby and Shaggy meet back up with the rest of the gang in front of Merchant Venice Pizza, and Velma feels that the fog was playing tricks on their eyes.

In the Pizza Parlour, Antonio explains he’s studying art in school when he isn’t working in the pizza parlour. Velma asks about Doge Malvolio the 4th, and Antonio exclaims they can’t find his portrait, and that his treasure still hasn’t been found. Furthermore, one of his 4 legendary medallions disappeared earlier. He also shows that he is wearing one of the medallions.

The gang are about to leave the pizza parlour, and Mario runs up to exclaim that the Ghostly Gondolier has just stolen the second medallion from the opera house. Mario also reveals the Professor Solari sent him.

The gang head off to the academy of fine arts, where Antonio shows off the portraits of his ancestors. They all have green eyes like Antonio. Also on the wall is the portrait of the Ghostly Gondolier.

The Ghostly Gondolier puts a curse on Doge, and later on escapes the dungeon where he razed the city and stole the Doge treasure. All that remained of his wealth was 4 medallions, and now, only two remain.

Professor Soloni hands Freddy the keys to the other medallion that remains so they can check up on it. Antonio takes the medallion out of its glass case and Daphne tries it on. 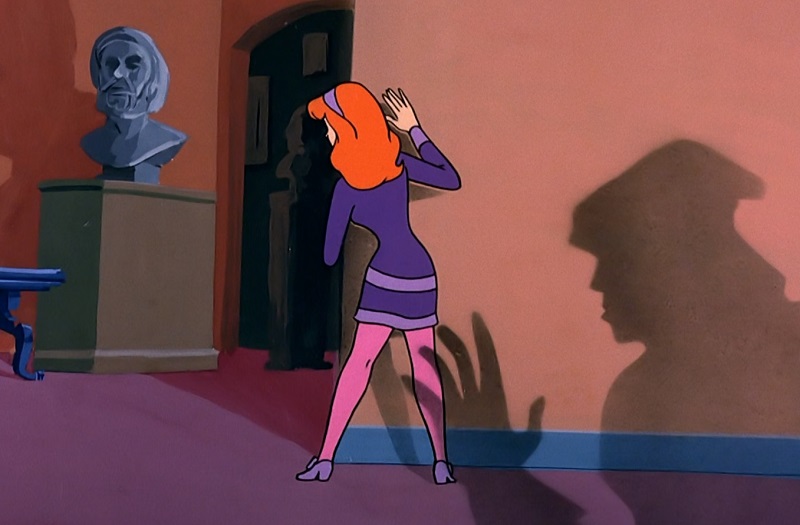 We then cut to Daphne who is locked up in an underground cell. Here the Ghostly Gondolier gloats that he now has 3 of the 4 medallions.

Walking the streets, they meet up with Mario and head back to the fine arts academy. Velma believes there’s a connection between the missing painting and the Ghostly Gondolier, so the gang search the academy from top to bottom. Mario, Freddy and Velma go one way, and Scooby, Shaggy and Antonio go to the basement.

While getting the keys for a room, Mario is kidnapped by the Gondolier. In the spot where he was nabbed, Velma finds red plastic particles. 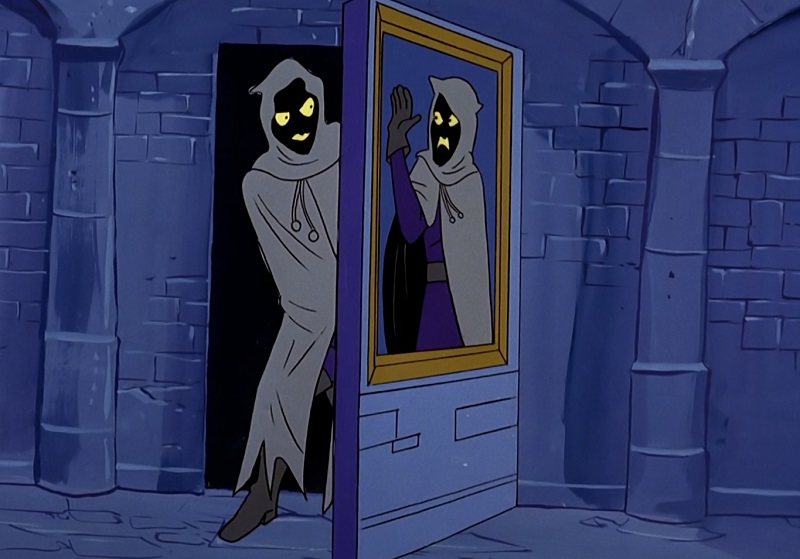 Soon Scooby and Shaggy are confronted by the ghost, but before anything can happen, Freddy and Velma show up. They follow some footprints on the ground and reach the outside where they see the Gondolier paddling off.

Catching up with the ghost, he sinks their boat, which sends off Scooby into a nearby window where he opens a secret passage that reveals the missing portrait. The gang also find Daphne and Antonio locked up. 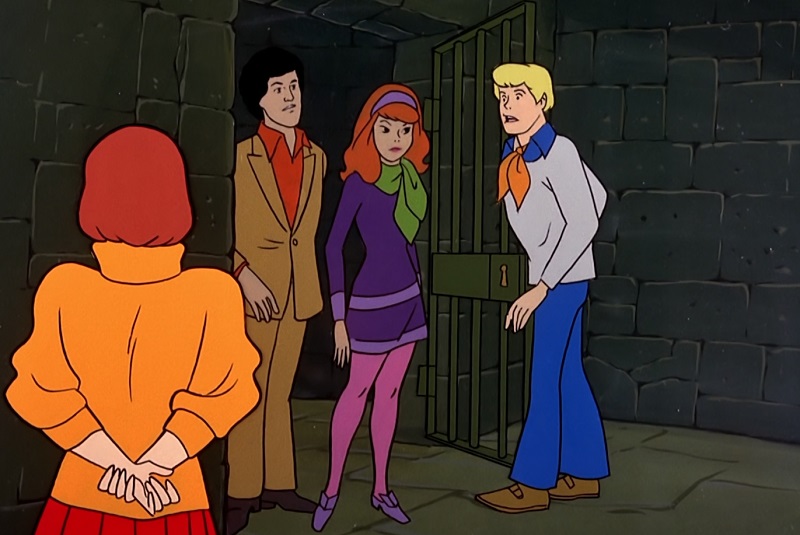 Looking at the portrait, Shaggy spots that the 4 medallions fit together to make one big one. Velma spots a pillar in the background with the 4 medallions on it and figures out they have to head off to the piazza san Marco.

Arriving just in time, they see the ghostly gondolier use his 4 medallions to open up a new secret passage. Following him, the gang head down into a tunnel. 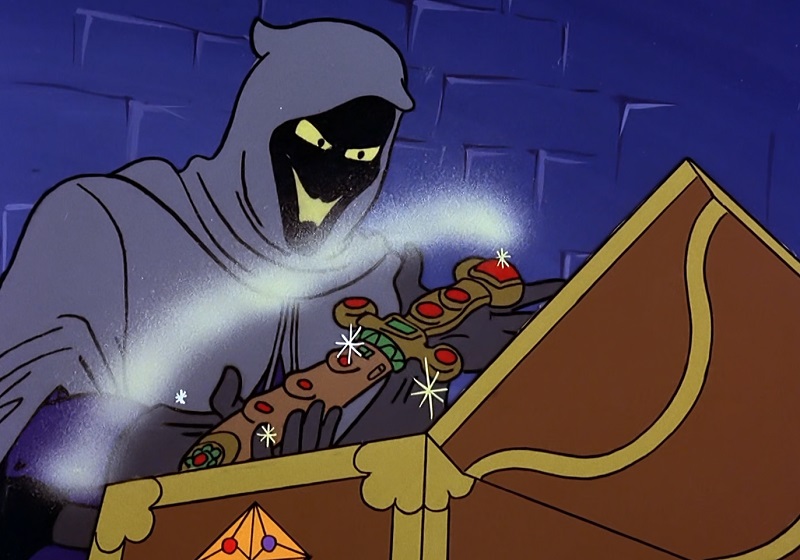 Unmasking the ghost, it’s revealed to be Mario. Velma figures out Mario is also an ancestor of Doge and did not want to share the family fortune. To disguise his green eyes, he wore red contact lenses to make his eyes brown, which explains the red plastic Velma found when Mario was kidnapped. 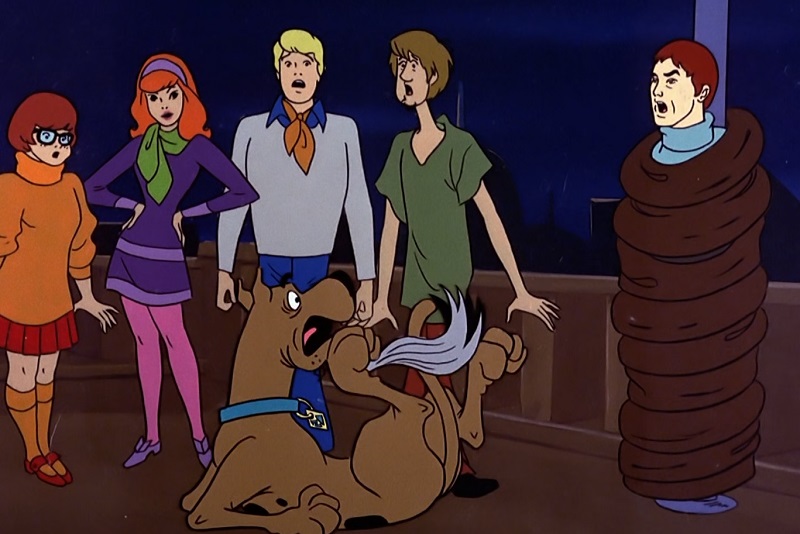 Mario used the supernatural curse to his advantage to cover up his theft. He also used an inflatable boat so he could get away easily wherever there was water. A compressed canister of C02 was all he needed to get his boat inflated.

I give this episode a 9.5 out of 10. This episode is nearly perfect for me, and I really have no complaints about it.

I loved the design of the Ghostly Gondolier, and while he wasn’t necessarily spooky, he was a lot of fun.

Other pluses of this episode were that the Scooby and Shaggy gags were kept to a minimum, and the episode focused on plot. I also enjoyed how Daphne was kidnapped, as this stirred up the action a little more than usual. 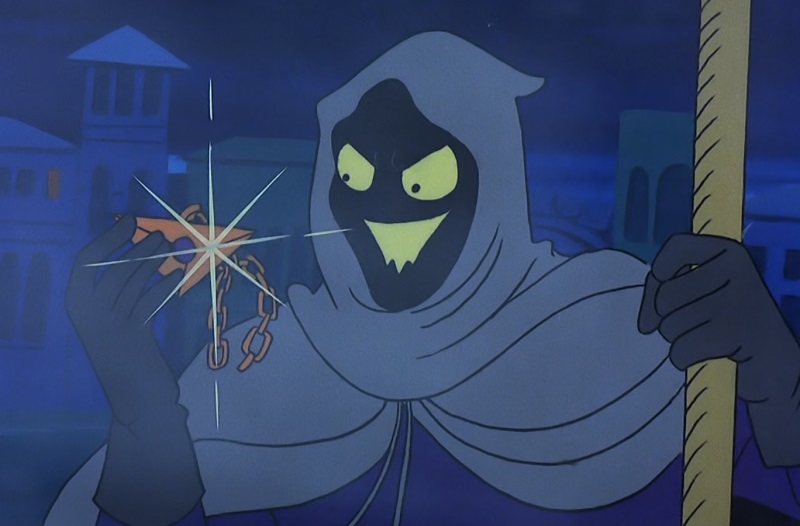 I also enjoyed the gang eating pizza at Venice Merchant Pizza, as it’s always fun for the gang acting as kids.

Why isn’t this episode a 10 out of 10 for me? Well, I suppose it’s because there’s too much going on. There are a lot of set pieces in this episode, but they never spend enough time in one spot to really showcase the setting. For example, the spot where they find the final treasure, we only get a brief glimpse of it and then we’re back outside fairly quickly.