Don’t Go Near the Fortress of Fear is episode 14 of Season 3 of the Scooby-Doo, Where are You! series.  It originally aired on December 19, 1978.

This episode sees the gang heading to Puerto Rico for a vacation, only to run into the Ghost of Juan Carlos at the El Moro Fortress.

If you’d like to own this episode, it’s available on Bluray or DVD as part of a Boxset that contains all 41 Scooby-Doo, Where Are You! episodes. 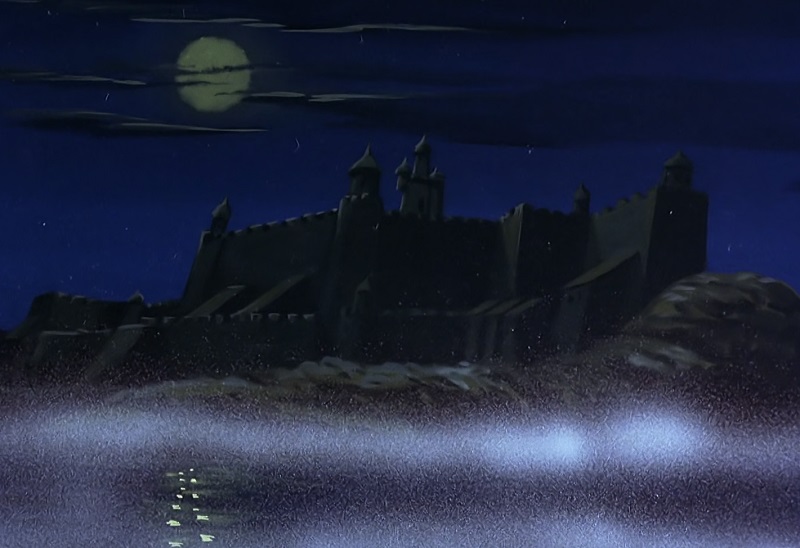 The episode begins with a shot of El Moro Fortress at night.  Two young boys named Pedro and Diego  are seen sneaking up to the Fortress to catch a glimpse of the Ghost of Juan Carlos.  Their wishes are granted as the ghost appears and frightens them off.

Meanwhile, on a port (where the Mystery Machine is being lowered by a crane), the Gang hear the sound of a cannon being fired, and Freddy writes it off as a Sonic Boom.  They also spot the local police on the dock searching for something.  Deciding to investigate, the gang learns that the local museum has been robbed of its priceless treasures. 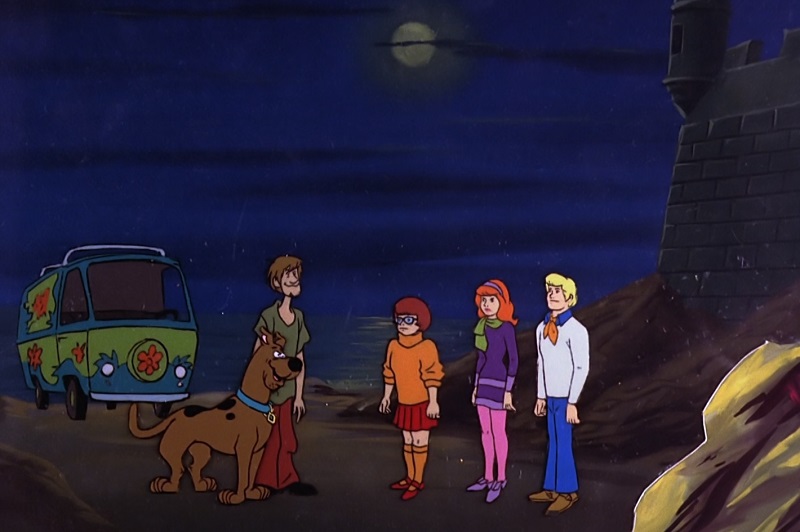 The gang offer to help investigate, however, the local police officer explains that their force can handle the case.  A mysterious man in a white suit can be seen eavesdropping in the distance. 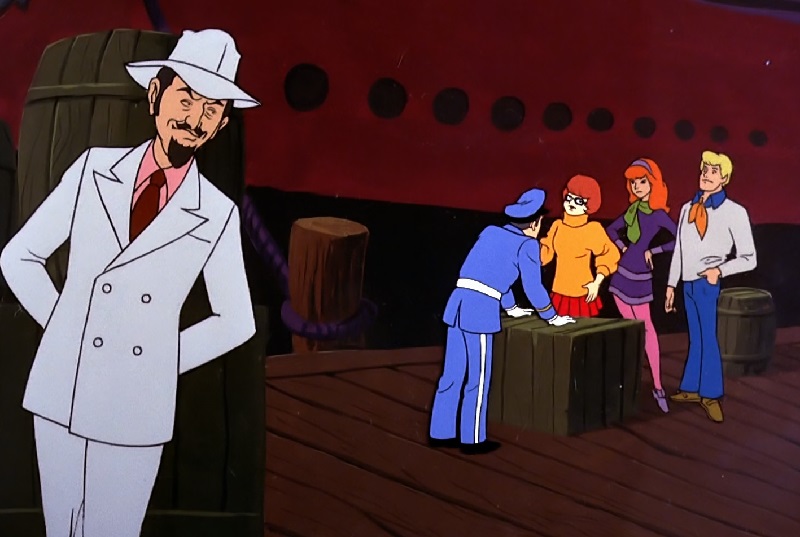 The ghost exclaims “Out of My Fortress!”, and Scooby and Shaggy kindly abide.  After a quick chase, Scooby and Shaggy evade the Ghost.  When they meet up with the rest of the gang, they both decide to keep it a secret so they won’t have to go back to the Fortress. 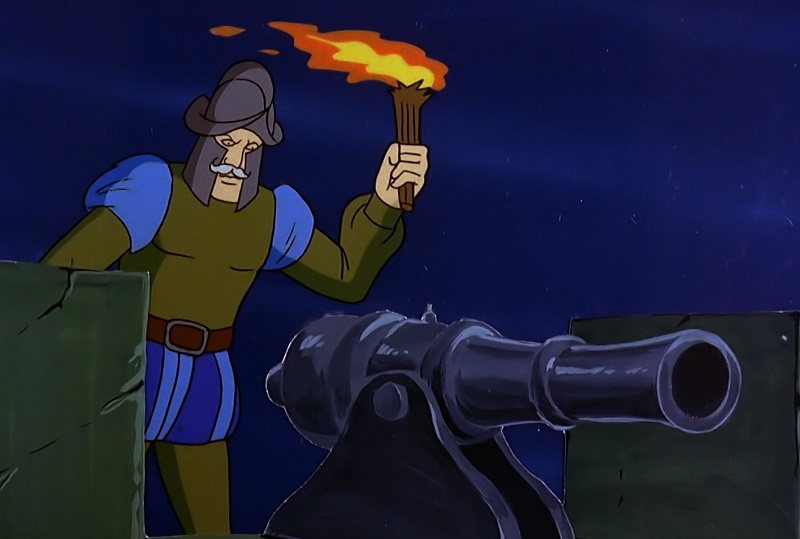 The next morning, the gang go on a fishing trip and ask Captain Eddie about the Fortress.  The good Captain explains that the Fortress is guarded  by a 16th century Spanish General named Juan Carlos, who occasionally shoots off an old cannon. 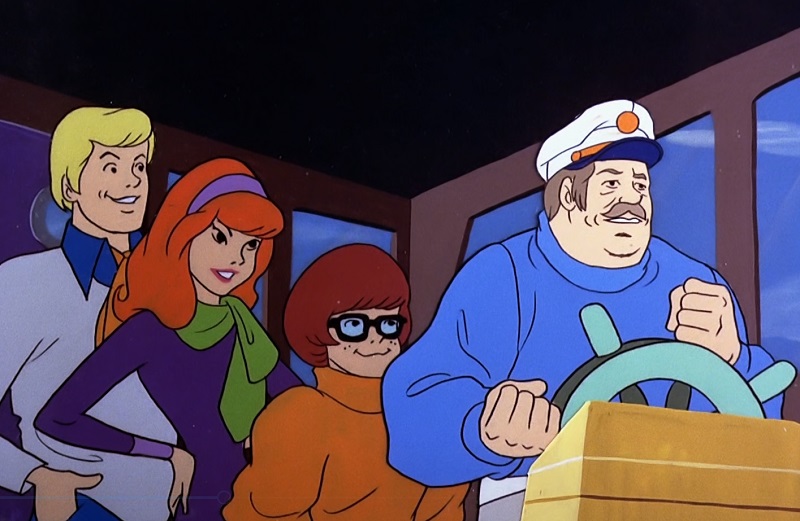 Meanwhile, while fishing, Shaggy snags a parachute.  When he pulls it in, Freddy notices that it\’s too small to support a man or a woman, while Velma declares that has no water damage, so it must have been recently deployed.

A heavy fog rolls in and cuts the fishing trip short.  Fascinated by the ghost legend, Freddy, Velma and Daphne decide to revisit the Fortress.  Once more, Scooby and Shaggy run into the ghost, who makes quite the effort to murder them by launching them off the fortress wall.

Before Shaggy and Scooby fall to their doom, Freddy and the girls show up and scare the ghost away.

Freddy helps Scooby and Shaggy back up.  But even after almost being murdered by the ghost, he abandons the two at the Fortress so he and the gals can go to the “Hall of Records” to investigate.  Freddy’s excuse for leaving them there is that ‘Lightning never strikes twice’, meaning that it’s unlikely they’ll run into the ghost a second time.

This excuse doesn’t make any sense as this was already the second time that Shaggy and Scooby have run into the ghost.  As if to mock Freddy even further, a bolt of lightning strikes the space near Shaggy’s feet two times in a row. 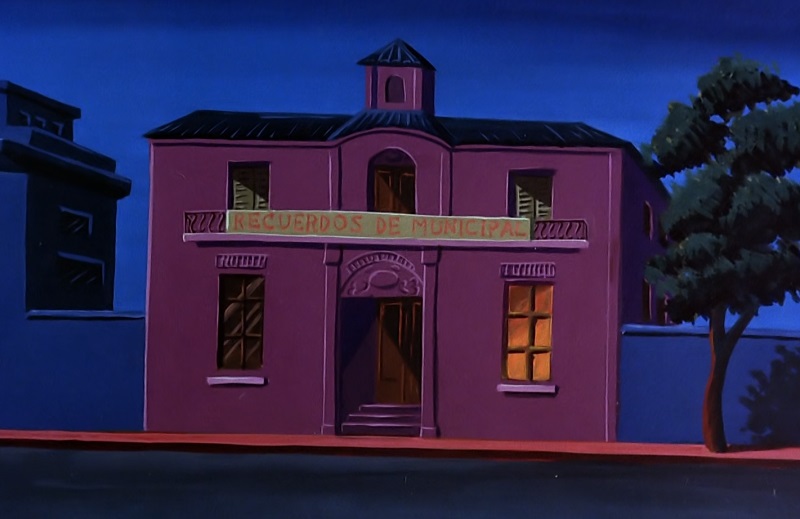 At the Hall of Records, the gang wake up the record keeper to investigate.  Here Daphne discovers a map of Puerto Rico that shows a tunnel leading from the museum to the Fortress.  Velma suspects the museum being robbed, and the fortress haunting have to be connected.  After figuring this out the record keeper kicks the gang out in a panic. 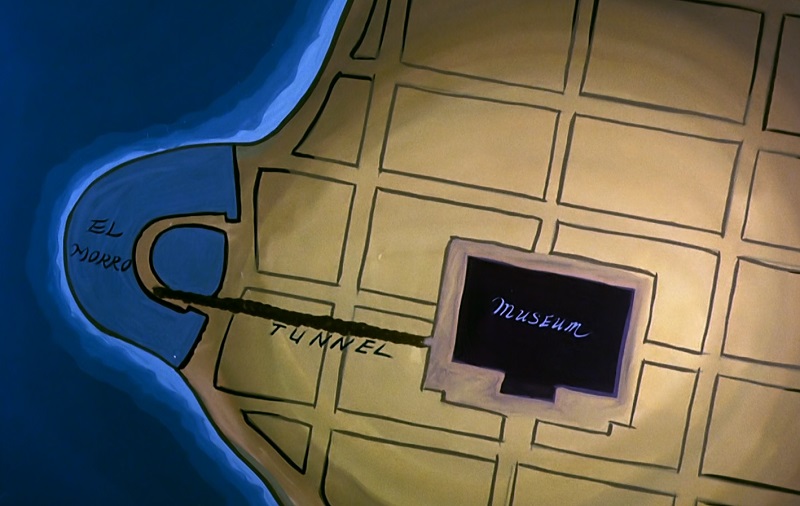 Knowing that they are on to something, the three of them search for the tunnel entrance by the museum.  What they don’t realize, however, is that they are being trailed by the man in the white suit.

After tripping on a cobblestone, Daphne falls onto a telephone booth and reveals the secret tunnel to the Fortress.  Descending, the trio follow the tunnel, for about an hour, until they come across a gleaming pile of stolen treasure. 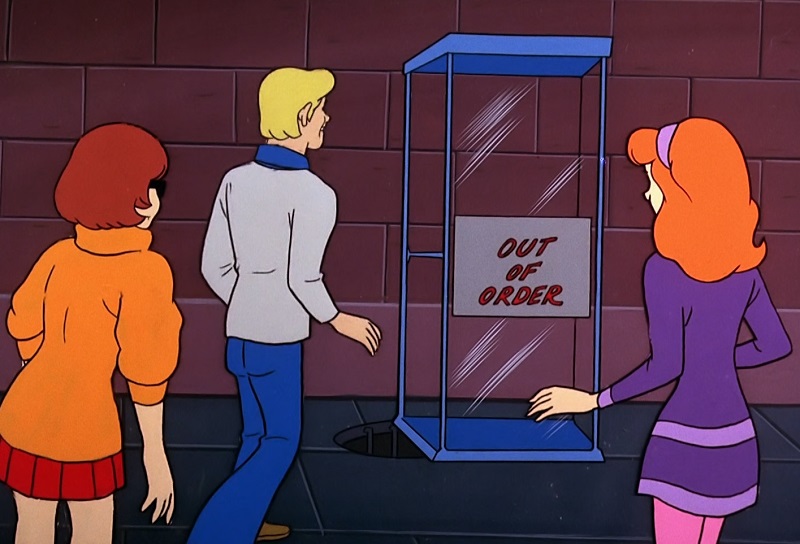 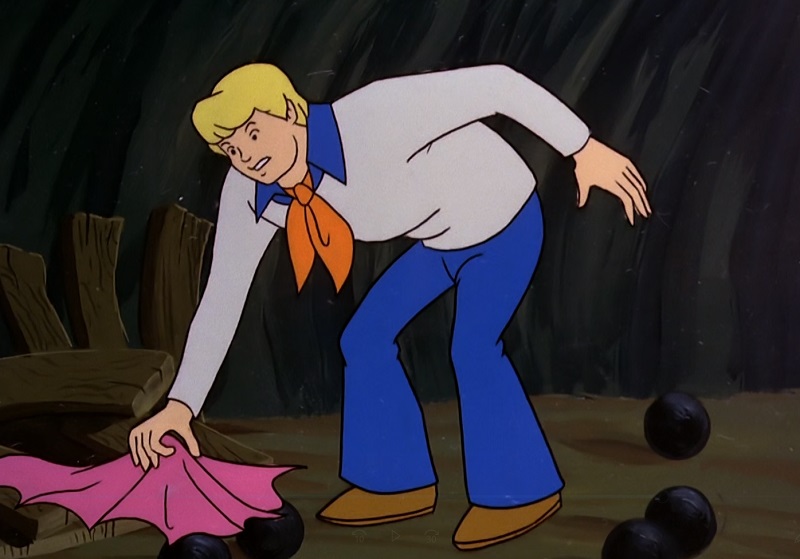 In all the hi-jinx, the gang discover more small parachutes.  They also discover hollow cannonballs, and Velma has this mystery figured out.   Velma also figures a way out of the tunnel, but before they leave, they run into the Man in White.  Turns out that he’s Inspector Amandez of the Puerto Rico police.  He had been following the gang out of interest and congratulates them on finding part of the treasure.  Unfortunately, half of the remaining treasure has already been smuggled out of the country.

Setting a trap, they indirectly catch the ghost, and it is revealed that it is Captain Eddie! 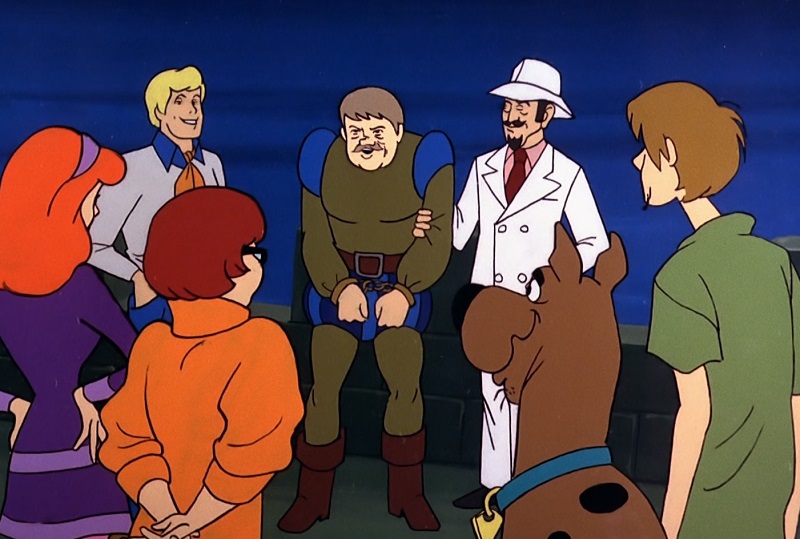 What Captain Eddie had been doing this entire time was firing off hollow cannons filled with treasure towards his boat.  Then all he had to do was fish out the parachuted goods to collect his stolen booty, where he could smuggle it out of the country. 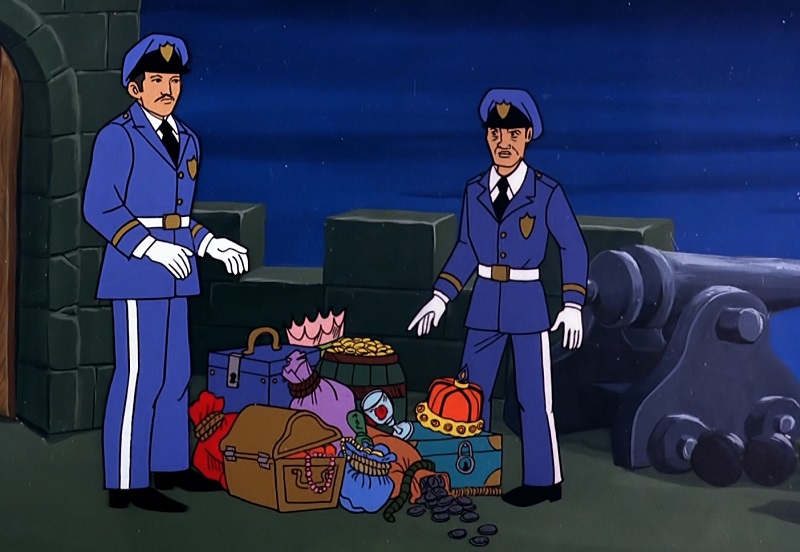 Captain Eddie is then hauled off to the local slammer by Inspector Amandez.

With another mystery solved, the gang spend the next day frolicking on the beach.

I give this an 8 out of 10.  While I feel the villain is bland, the fact that he tried to kill Scooby and Shaggy made for some riveting moments.

This episode also moves fast at a quick clip.  Every few minutes we are switching locations, whether it be the dock, the Fortress, the fishing boat, the Hall of Records or the Tunnel.  I feel it was super smart to keep Shaggy and Scooby isolated for most of the episode as it made for some interesting adventures.

The actual ghost for me was rather generic, and not that interesting to look at.  While it was nice that they incorporated some Spanish folklore, I wish they came up with a more visually exciting bad guy.  The real bad guy, Captain Eddie, well, he was quite devious and sinister with his two-faced personality, and that bumps my score up significantly for this episode.

What are your thoughts?  Let me know in the comments below!