To Switch a Witch is the fourth episode of Season 3 of Scooby-Doo, Where Are You!. It originally aired on September 30, 1978, and takes place on Halloween in Salem, a town know for its Witchcraft Trials.

As always, my reviews contain Spoilers, so check this episode out first if you haven’t already.

To Switch a Witch – Episode Review

A man can be seen digging a grave in a cemetery during a thunderstorm. Pausing at the lightning, he proclaims, a ‘storm be bad luck on Halloween’. Indeed Mr. Gravedigger, it is, out and about with a metal shovel in an open field during a lightning storm is never a good idea. Plus your feet are going to get awfully muddy when the rain hits. 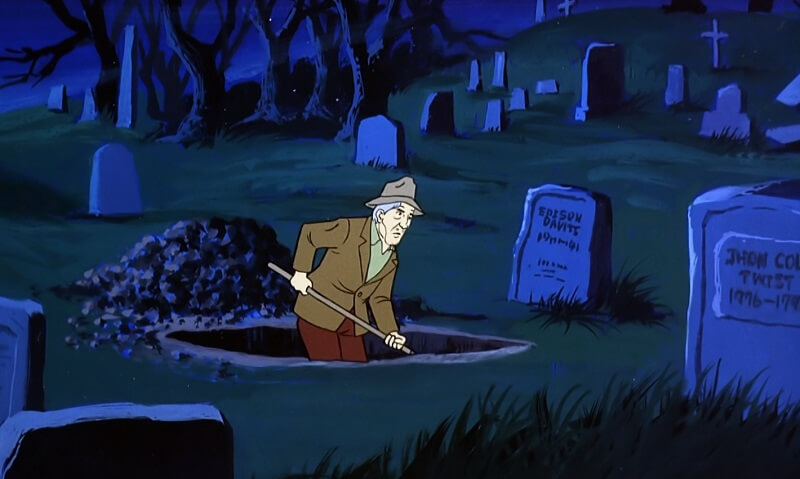 We then cut to a tombstone that reads Milissa Wilcox – Witch, followed by an evil cackling. A Witch then poofs into view, mocking the gravedigger from behind the tombstone. 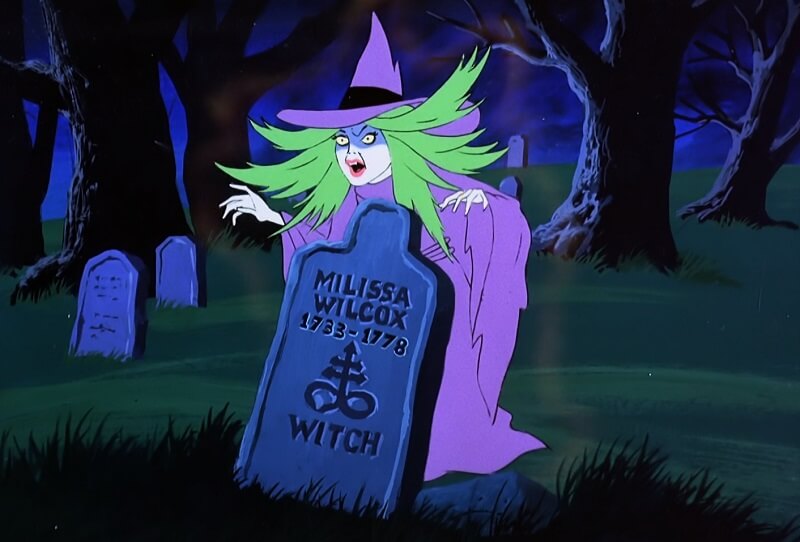 The gravedigger hightails it out of the cemetery proclaiming ‘She’s back, she’s back’. The man runs all the way to the house of Squire Marley. When Squire opens the door, the graveyard caretaker exclaims ‘she’s risen from her grave on Halloween night, like she swore she would when they burned her at the stake 200 years ago.

Squire Marley tells the old man to stop babbling, and explain himself, and the caretaker exclaims that it’s Milissa Wilcox, the Witch of Salem who has risen. 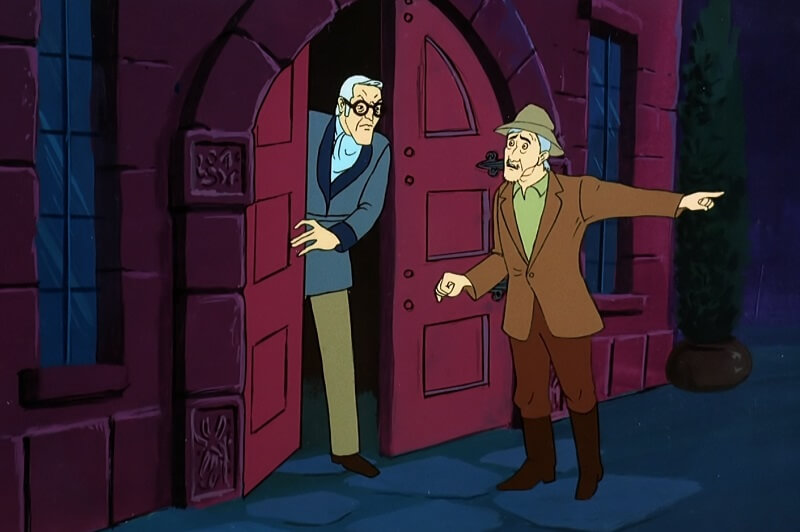 Meanwhile, in the Mystery Machine, the gang are headed their way to Salem to visit their friend Arlene Wilcox, who has just inherited her family’s house. Velma is slightly worried, as while on the phone with Arlene, the phone went dead just before Arlene had something important to say.

Back at the cemetery, Squire Marley sees the Witch first hand, and tells the Caretaker (Gar Mooney) to round up the town selectmen for an emergency meeting.

Freddy drives into the Wilcox’s driveway, and Daphne exclaims ‘Jeepers, what a spooky place’. They spot Squire Marley hammering a sign on a tree within Arlene’s driveway. Squire tells them to ‘Go Back’, as Arlene has been possessed by a Witch however Freddy insists on seeing their friend. Driving away, Squire proclaims that they will be struck down by the witch.

Entering Arlene’s house, the gang find a normal young girl, terrified by the town around her. Squire Marley had just confronted her saying that she just looked like the Witch of Salem and is now possessed due to Arlene being a direct descendent of Milissa Wilcox.

The gang go to their rooms to relax. To pass the time, Shaggy and Scooby get dressed for Halloween. Shaggy is dressed as a peasant, and Scooby is coincidentally dressed as a Witch, similar to Milissa Wilcox. It doesn’t take long before they bump into the real thing 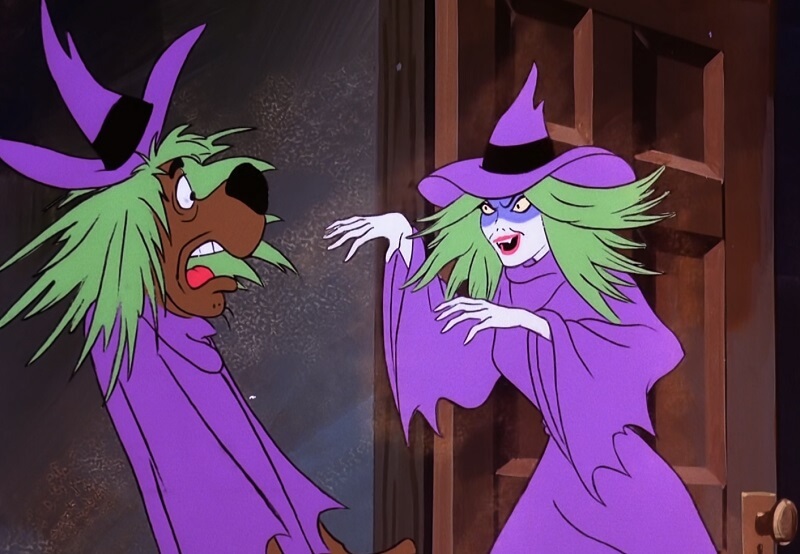 Freddy and the girls hear the ruckus and run to Shaggy and Scooby’s aid. The Witch has vanished, but Shaggy verifies that she does look like Arlene. Velma, in the meantime, finds some strange liquid that is dissolving the carpet where the Witch had stood. Freddy announces this as Clue #1. 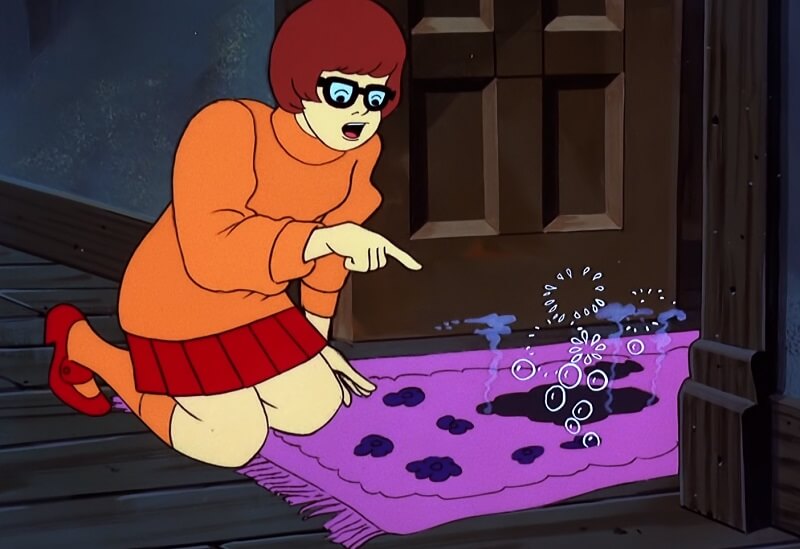 Shaggy looks out the window, and spots the Witch heading for the graveyard. The entire gang, minus Arlene, chase after the Witch. At the graveyard they see the Witch disappear into a puff of smoke. Behind the grave, Velma finds CLUE #2, a hot piece of wire.

Freddy investigates the symbol on the tombstone, and the cemetery caretaker explains that it’s the mark of Mormo, the Witch’s sign.  Fun fact, the symbol is called the Leviathan Cross, and it’s the symbol for Sulphur, or more suiting, Brimstone.

The gang then head off to the Salem Witchcraft Museum to do some old fashioned detective work and look through old records. There they find the Wilcox family tree where Arlene’s name is scratched out and replaced by the word ‘Gemini’. They also discover that the Symbol of Mormo is intended to stop a witch from rising from the grave. 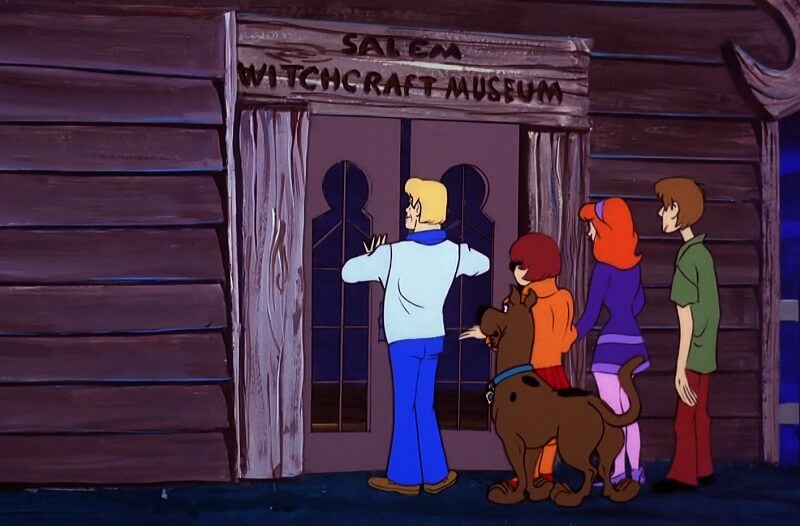 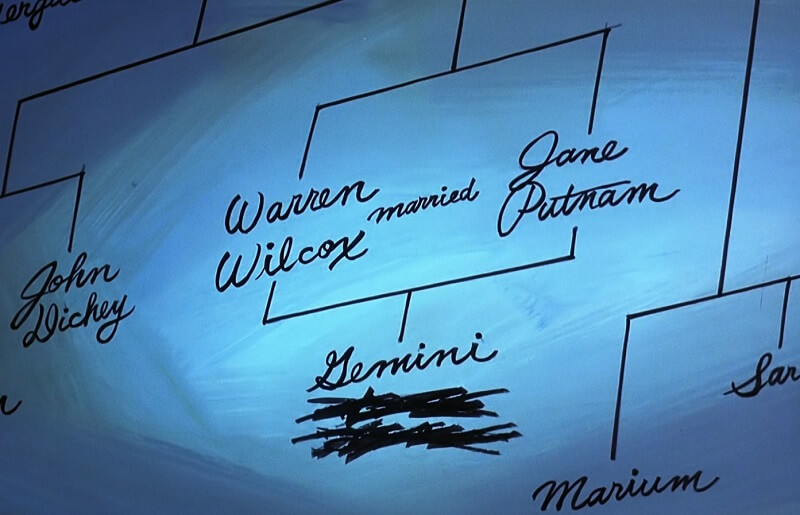 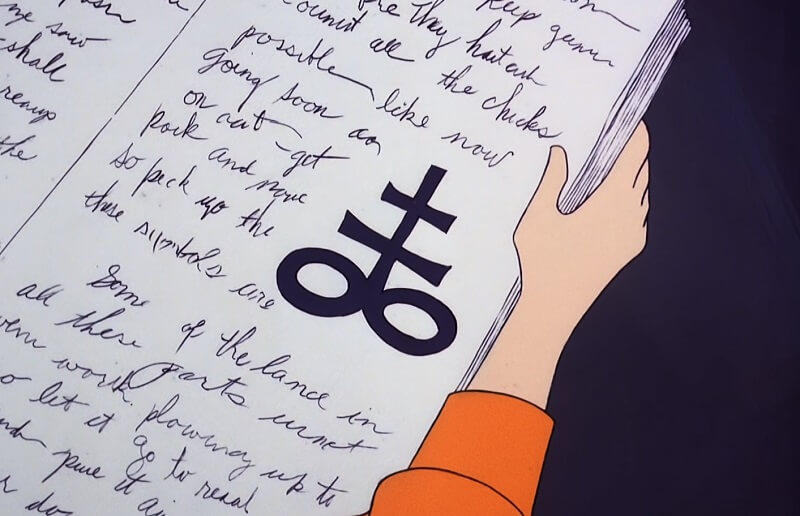 Splitting up, Shaggy and Scooby go Trick or Treating, while Freddy, Daphne and Velma go back to Arlene’s house.

Before they arrive at Arlene’s house, Gar the Caretaker knocks on her door and tells her to run as Squire Marley and his angry mob are on their way to capture her. Terrified, Arlene runs out of the house and into the evening night.

While Trick or Treating, Scooby and Shaggy run into Arlene who is being chased by the angry mob. Arlene makes her escape, however Scooby is mistaken for a Witch (that has turned herself into a dog) and is taken by Squire Marley to the Witchcraft Museum. There they sit Scooby on the dunking stool. A 200-year-old device that repeatedly submerges you in water until you confess that you’re a Witch! 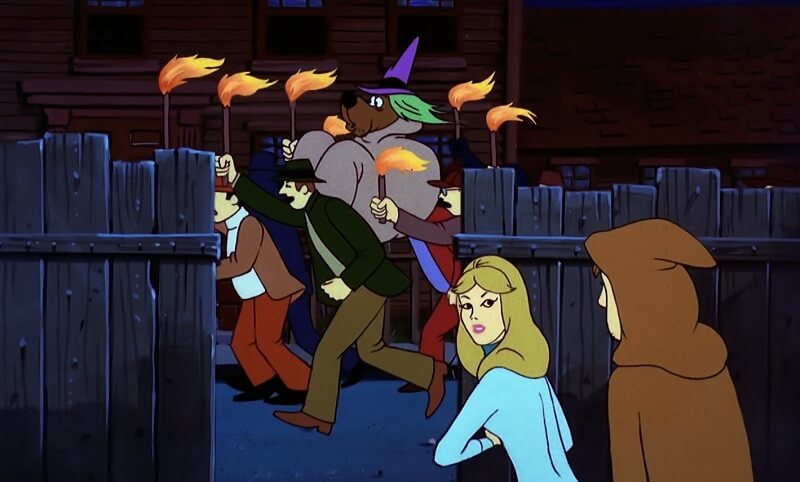 Back at the house, Freddy and the girls find it empty, with the front door wide open. They head to the graveyard instead, where they find Arlene where she explains that she’s hiding out there after being warned by Gar the Caretaker that the mob was headed towards her house.

Shaggy escapes the Witchcraft Museum and runs to the graveyard where he explains that Scooby is in trouble. The gang head back to the museum and rescue poor Scooby, but not after being chased by the mob.

Fed up, the gang set a trap in the cemetery. While the trap doesn’t go smoothly, they do end up catching the witch.

Squire Marley arrives just in time for the gang to reveal what’s really going on. The witch is actually Arlene’s sister, whom Arlene never even knew about. All this time the sister wanted to scare Arlene out of the town so she could claim Arlene’s inheritance and estate. 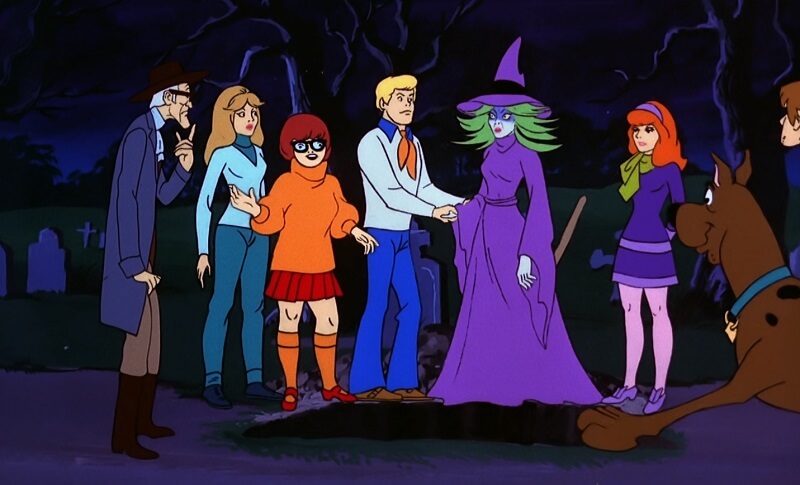 Freddy explains that Gar Mooney was assisting the sister, and the wire they found behind the grave was to make the Witch glow green. The liquid they found in the carpet was battery acid from the battery that powered the glowing effect.

Squire Marley apologises to the gang and escorts the twin sister and Gar off to Jail. 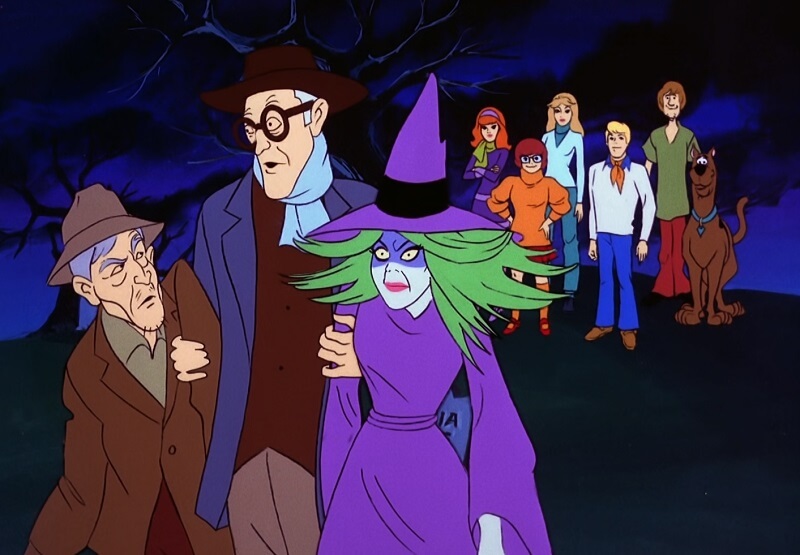 My Thoughts on To Switch a Witch

I give this episode a 10 out of 10!  This episode is awesome! Not only does it take place on Halloween, but it takes place in an American town known for its historical relevance for Witches. A few years ago, I visited Salem for Halloween, and this episode does a great job of capturing the historical atmosphere with its antique architecture, and townspeople fashion and dialect.

There’s a cool shot of the gang running past a Scarecrow, that I absolutely adore. 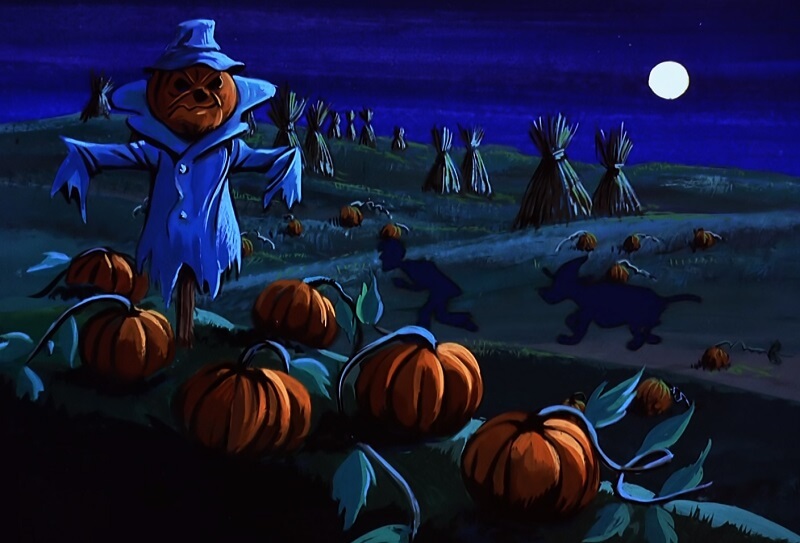 I also loved the Witch’s costume and green glow. It was cool seeing her in various spooky settings, such as in doorways, or in the cemetery. I just wish they revisited they mythology of Arlene and her Twin Sister 20 years later with the Witch’s Ghost. That would have been cool. 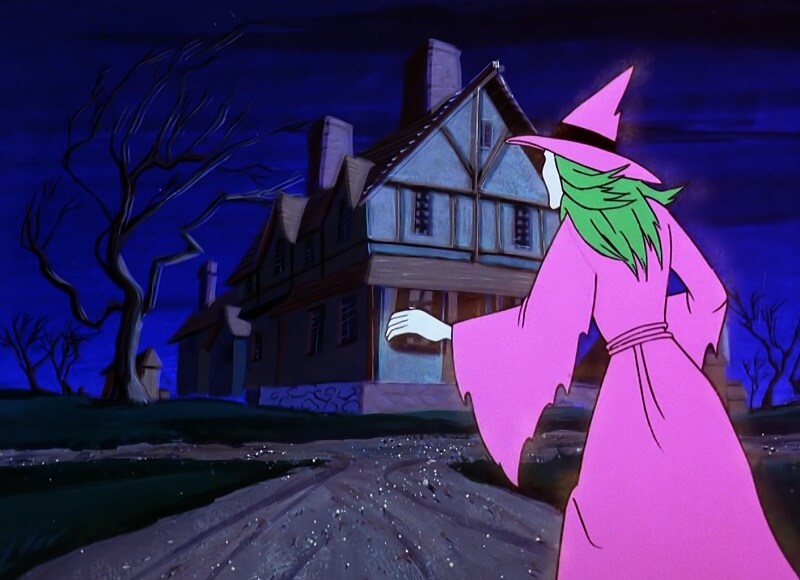 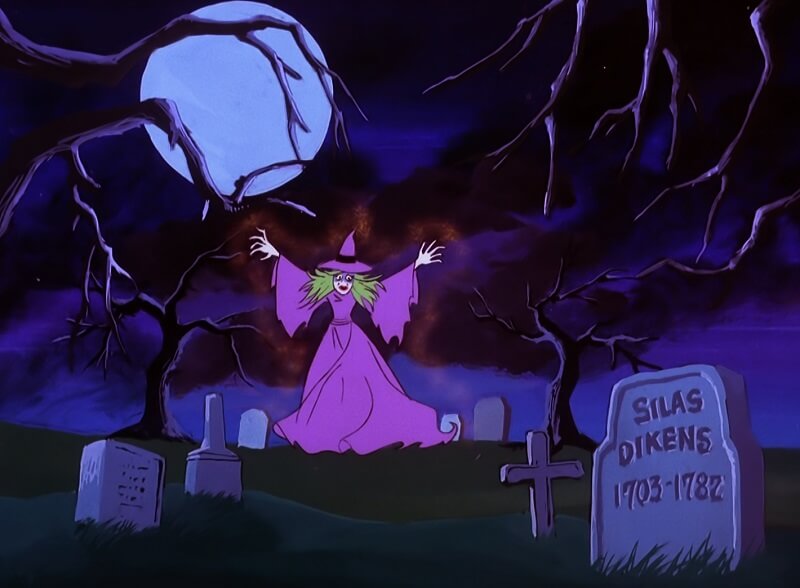 While the Twin angle is a little ‘cheap’ and worn out over the years, it seems fresh here due to the strong writing.

I left a lot of the comedy out of my review, but this episode is chock full of funny goodness. The humour is a nice balance against the creepy backdrop of this hexcellent episode.