Make a Beeline Away from that Feline is the 9th episode of Scooby Doo Where Are you Season 3 and is also known as “Who was that Cat Creature I saw you with Last Night”. It originally aired on November 4, 1978, and sees the gang in NY city, beating the late 80s trend of film franchises heading to NY such as, Gremlins 2, Home Alone 2, Short Circuit 2 and Friday the 13th Part 8, by a decade.

Similar to all of these movies, there is trouble in New York and the gang discover Daphne’s Aunt Olivia Dervy is turning into a cat creature at night and robbing jewelry stores. Although it is hinted at but never said, this episode literally re-imagines what a ‘cat burglar’ really is.

I don’t have any trivia for this one, other than the Mystery Machine does not appear. At first I found this odd as they drove the Mystery Machine all the way to Turkey and Scotland, so why not New York? Then I remembered from my visit to NY that finding a parking spot is next to impossible, and traffic is always a hassle. So I can’t blame Freddy for not wanting to drive. 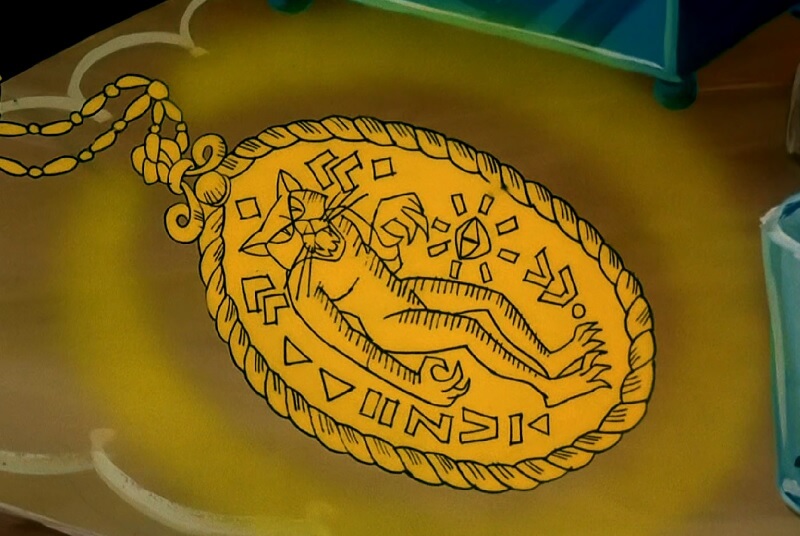 Make a Beeline Away from that Feline – Episode Review

The episode begins with us getting a nice shot of a stormy night in New York City. In the penthouse apartment of York Towers we see an older lady having a nightmare. On the bed beside her, a medallion with a cat figure glows. We then pan back to the lady who has been transformed into the cat creature, and watch her escape out of her apartment window. 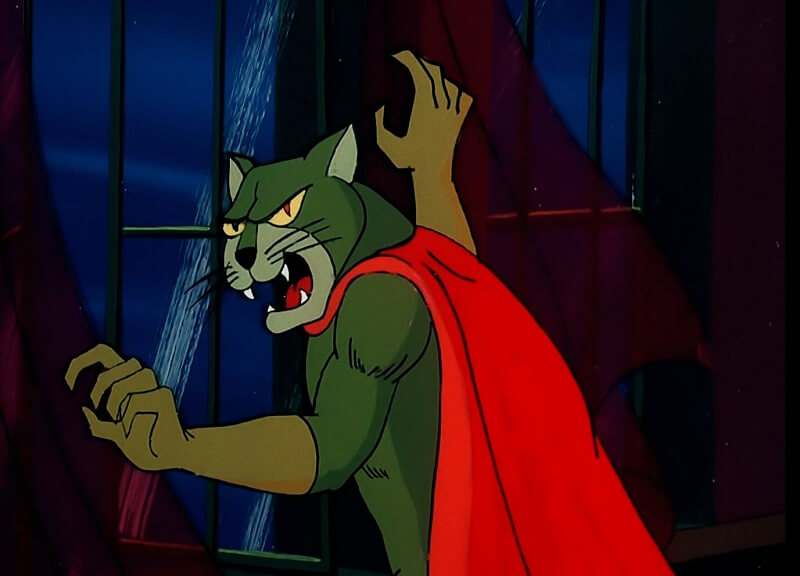 Down below, in the streets of New York, we see the gang outside of Bixby’s Jewellers hailing a cab.

Several taxis drive by, but Scooby and Shaggy are not concerned as they are mowing down on a mile long hot dog. Daphne explains that they are in New York visiting her Aunt Olivia Dervy. 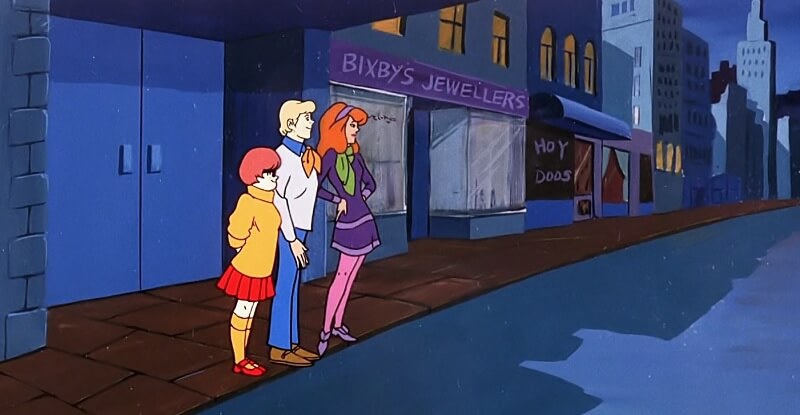 Inside Bixby Jewellers, Shaggy hears a noise and peaks in a small hole of the fogged up windows. The cat creature pops his face out and scares the heck out of Shaggy. At the same time, Scooby accidentally falls down a manhole. Freddy then looks in the window and sees that the place is all torn up inside.

Down in the manhole Scooby spots the Cat Creature running towards him with an arm full of valuable jewelry. 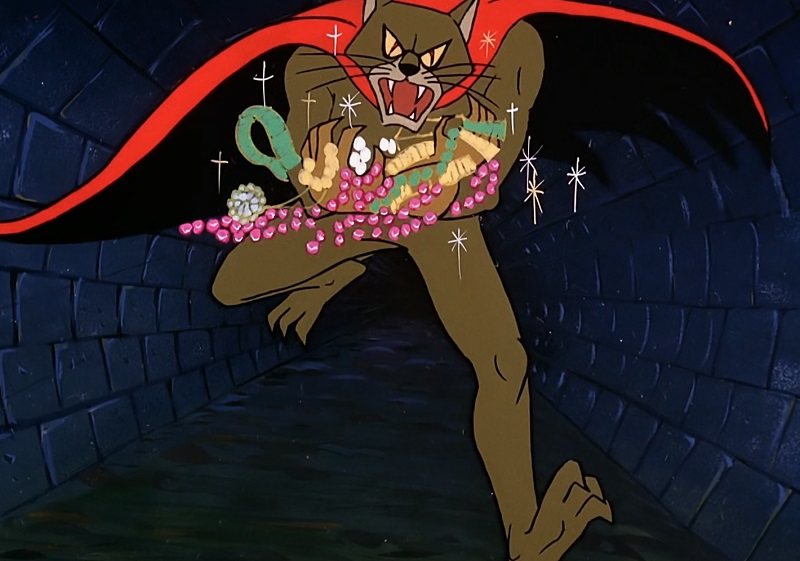 Back above ground, Scooby explains he saw the cat creature as well as the police show up. Here we see Mr. Bixby explain to the police that his burglar alarm went off and that he wants his Richman Ruby back.

Instead of talking to the police about the Cat Creature and underground tunnel, the gang head off to Daphne’s aunt’s apartment. They also find an emerald earring on Scooby’s collar, and I assume they returned that to the police.

Outside of York Towers, the cabbie tells the gang that strange things happen there. Some people go in, and never come out. The doorman at York Towers also hassles the gang, but Daphne uses her sass to get by. 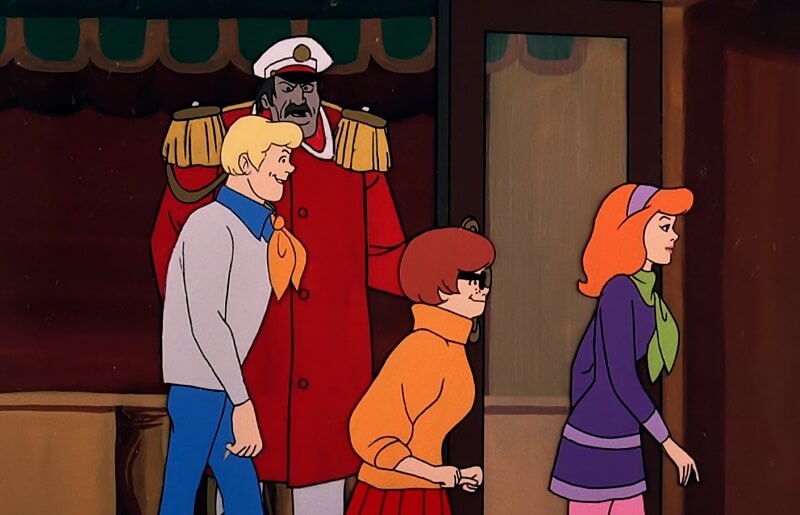 The gang take an old cage elevator up as we watch the cat creature enter the apartment from the outside. As Daphne rings the doorbell, Aunt Olivia transforms back to her human self and answers the door all confused.

Aunt Olivia explains that strange things are happening, and shows the gang the mass of jewelry on her nightstand which has an emerald earring that matches the one Scooby found on his collar.

Two weeks ago a strange package was delivered to her, where she found a strange medallion with a cat creature on it. Despite the package having a return address, Aunt Olivia keeps the medallion but hopes someone would come back and claim it. 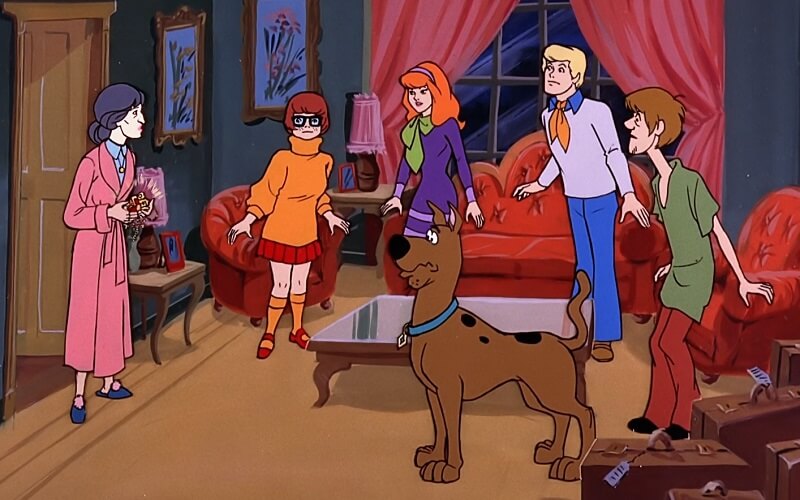 That night, she had a terrible nightmare where she dreamed she turned into a cat creature. In this form she’d go out and commit robberies.

Freddy finds the package wrapping paper and reads out the return address. Freddy and the girls decide to check out the Jewelry store, while Shaggy and Scooby go to the return address. After they leave, Dr. Bell refills Aunt Olivia’s prescription, and once more we see her transform into a cat creature and escape her apartment.

At 3056 East Westmore, Shaggy and Scooby find a cemetery, and despite their lack of courage, they enter it. I google mapped this address for fun, but this location does not exist. At 13-B, they find a marble statue of the Cat Creature. 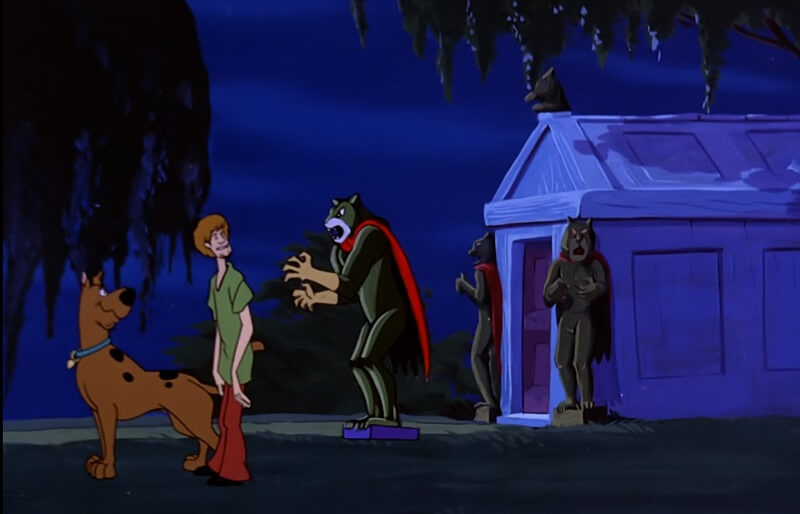 It does not take very long for them to run into the real Cat Creature who gives them a chase around the cemetery. Amidst the chase Scooby and Shaggy accidentally activate a secret door to a mausoleum that opens up when they spin the marble cat creature statue. Our pair run into the mausoleum escaping the deadly cat creature. 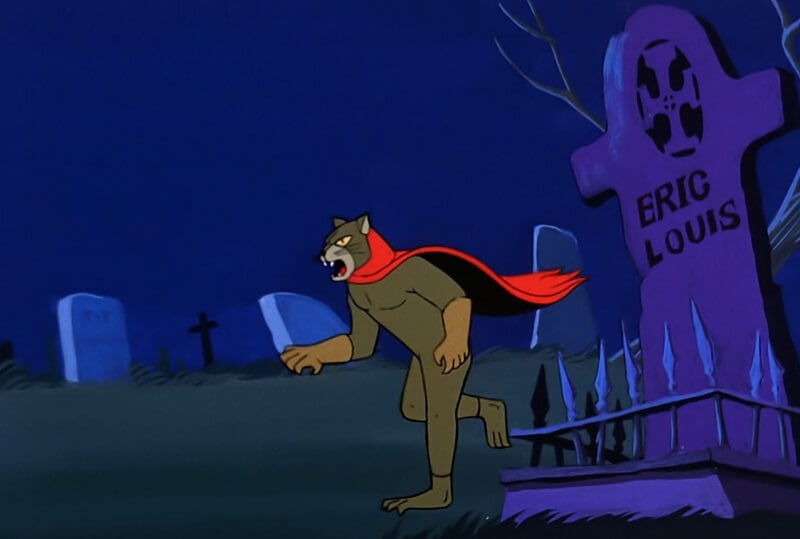 Back at the Jewelry store, the gang talk to Mr. Bixby who wants his Richmond Ruby back. Daphne remarks that she never saw the ruby among Aunt Olivia’s stolen pile of jewelry. The gang search the empty store for clues and discover a trap door beneath a rug.

Freddy and the girls go down the trap door to check it out and are brought to a long tunnel, which they follow 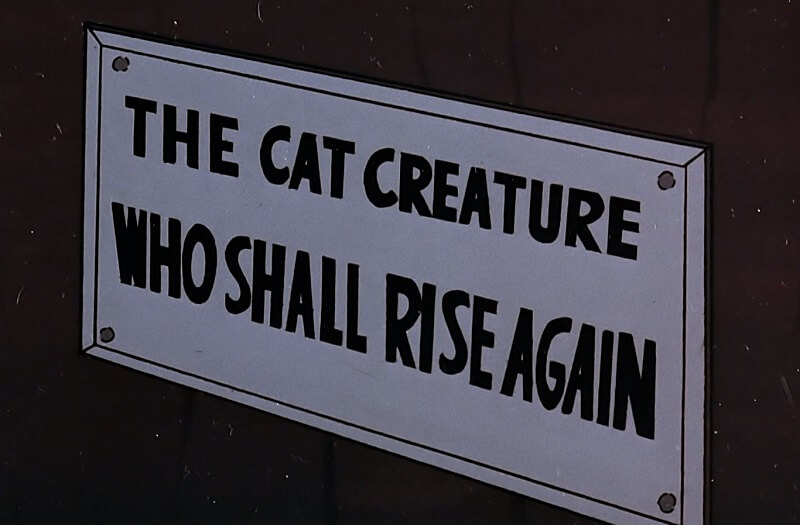 Timed perfectly with Shaggy reading out the words, the coffin lid begins to open and Freddy, Daphne and Velma emerge.

Outside the Cat Creature opens up a manhole and emerges into the Mausoleum. The whole gang run away where Freddy has found the secret door to escape.

The gang head back to York Towers and Velma finds it unusual that Haskell the Doorman is missing. Daphne figures he’s on a break but as the gang ride the glass elevator up, we see Haskell’s head emerge from some potted flowers. This was quite the humours scene to me, as Haskell is built like a linebacker, so it’s doubtful he could hide that easily.

In Aunt Olivia’s apartment, Dr. Bell has returned for a second time, and ups her prescription. Daphne notes his address is 96 Park Avenue. I google mapped this, and 96 Park Avenue does exist, and it’s a business complex tower with multiple offices.

Velma finds a piece of shirt that was ripped off Shaggy’s shirt during the cemetery chase. Freddy smells something fishy, so he sets up a trap.

Having Shaggy and Scooby fake it up as Aunt Olivia, the two lie in her bed. The window is left open so Scooby goes to close it. As he shuts the storm window, the medallion begins to glow, and when he returns to bed, Shaggy has turned into a cat creature.

The Cat Creature takes chase after Scooby and Freddy barges into the room before running towards the stairs. Scooby, meanwhile, takes the glass elevator and taunts the Cat Creature who smashes through the glass roof and into the elevator. 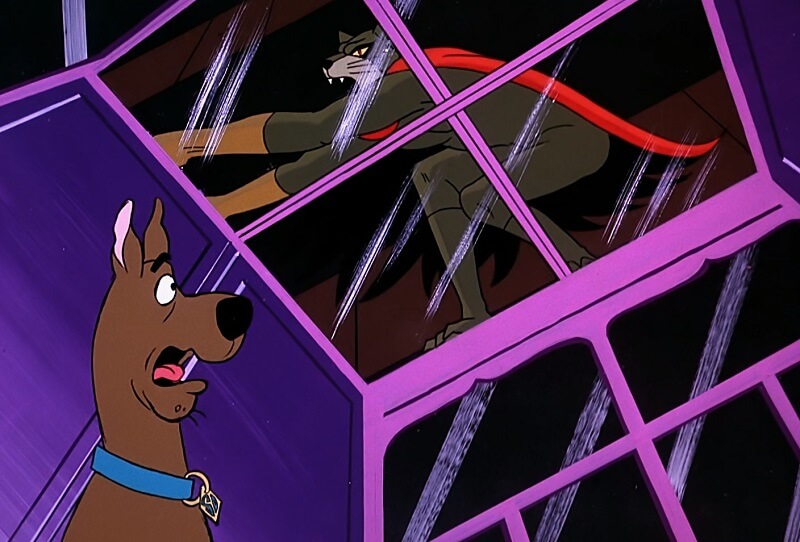 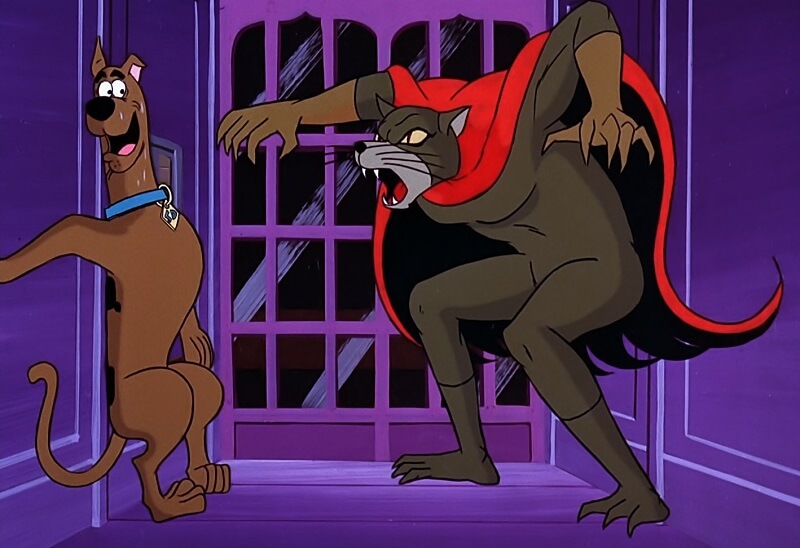 Freddy fiddles with the Elevator and they end up capturing the cat creature.

Unmasking the beast, they discover that it’s Dr. B.B. Bell. 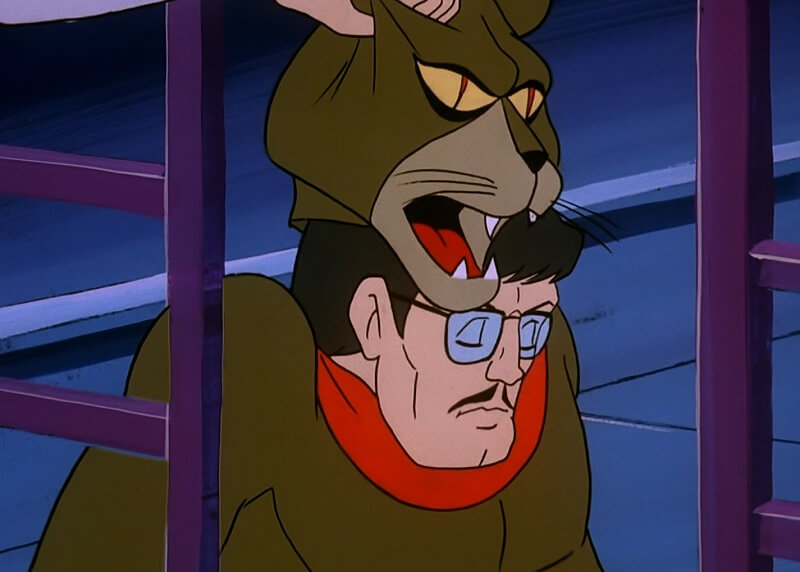 Dr. Bell hypnotized Aunt Olivia with the phoney cat medallion into thinking she was a cat creature. While she was knocked out from the prescription he gave her (although this prescription part is implied as – drugs and kids are a taboo topic) , her bed spun into a secret room while she slept.

The apartment is built in an old building that has lots of secret panels, and Velma demonstrates by hitting a secret panel that returns the bed Shaggy is in back to the bedroom.

Aunt Olivia asks, why her out of all people, and Dr. Bell barks out that it’s because she responded to hypnosis better than any one ever has. Dr. Bell left just enough jewels so Aunt Olivia would think she was guilty, but kept the most valuable jewels, such as the Richmond ruby.

For the majority of the episode, the suspense is dialed all the way to 10. There are stakes at play as the gang want to prove Aunt Olivia’s innocence.

It was great to see the sights of New York such as the store fronts, old apartments and cemetery. The old apartment with its classic architecture and glass elevator was particularly a treat.

While we get a few Scooby and Shaggy gags, they aren’t as prominent, and the episode spends a lot of time setting up the plot, which has a great pay off later.

This episode also has a rich horror movie vibe, and reminds me of classic horrors such as The Cat People, Rosemary’s Baby and The Sentinel. 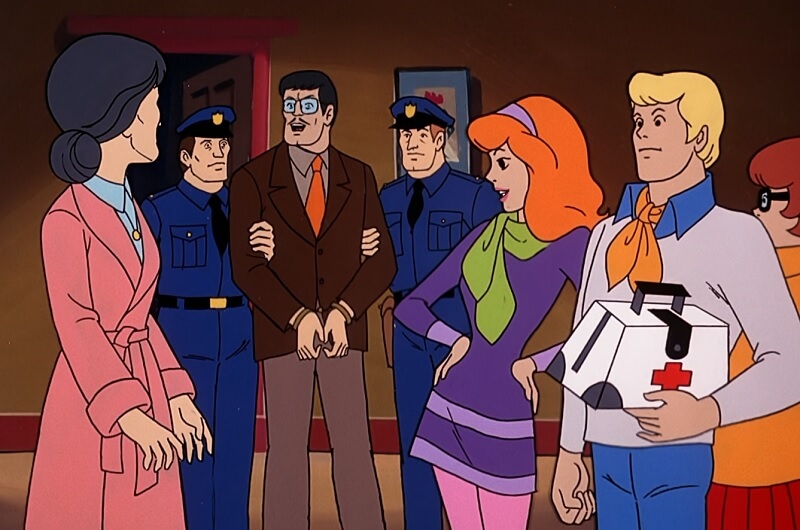 I also appreciated how Freddy and the girls encountered the Cat Creature, as typically, in this season, it’s usually just Scooby and Shaggy and the encounters are often played for humour. Here we actually feel like the gang are in trouble, and Shaggy even has his shirt shredded by the cat creature.