Watch Out! The Willawaw! Is the first episode of season 3 of Scooby-Doo Where Are You! And originally aired on September 9, 1978.

The gang are near a Chippewa Indian reserve and on their way to meet Velma’s uncle Dave at his cabin. This isn’t the same uncle we met in the Curse of Viking Lake. That was Uncle John.

Uncle Dave who works as a border patrol officer for the USA-Canadian border. I’m not exactly sure where they are, but I suspect Michigan as there is a Chippewa reserve near the border crossing in that area.

Anyway, when they get there, they find her uncle gone and the cabin ransacked. While searching for Velma’s uncle out in the woods, they see something monstrous flying in the sky and learn that it’s the Willawaw, an owl-like monster that will carry its victim off once it calls the person’s name. We also get a couple of owl like henchmen who cause further havok to the gang’s adventure.

I don’t have much trivia about Watch Out! The Willawaw! Other than that there is a character named Red Herron, which is a play on Red Herring. But is he the bad guy, or just a ruse from the writers? Let’s find out!

Watch Out! The Willawaw! – Episode Review

The episode begins with the gang on a rickety wooden motor boat during a bad storm. Velma is worried about her uncle Dave who promised earlier to meet them at the village, so something must be wrong if he stood them up. 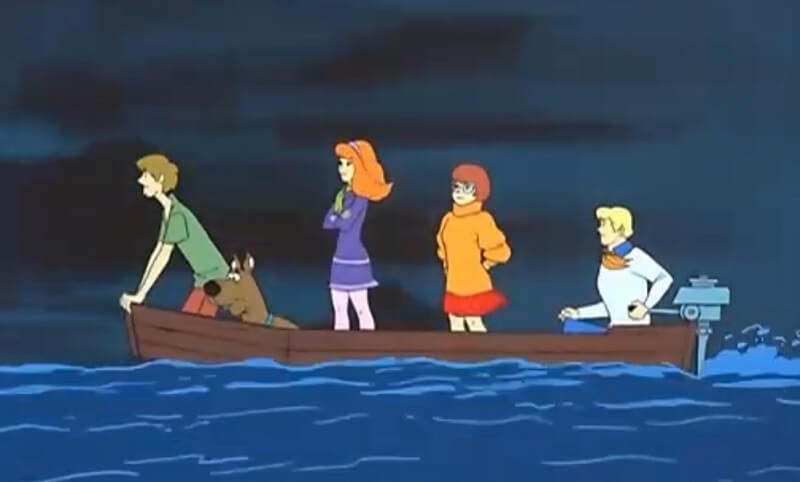 The gang reach the Indian Bay picture rocks which marks the area close by to Uncle Dave’s lodge. Before they reach the spot, however, a giant Owl swoops down at them, scaring the entire gang. 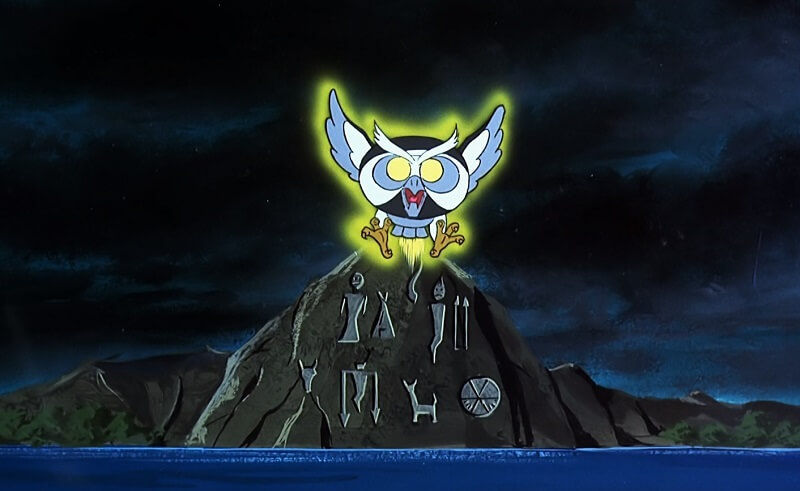 At Uncle Dave’s lodge, the door is unlocked, so the gang see themselves in and find it ransacked. His dinner is even left on the table meaning he was nabbed pretty fast. 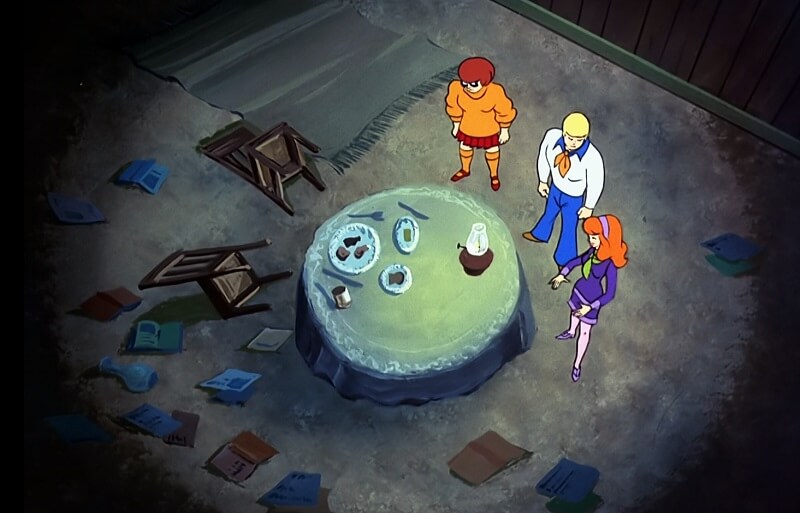 Scooby is the first to run into some owl creatures, which aren’t the Willawaw, but more like some giant birdmen. This gets Freddy curious, so they go outside and look where Scooby finds some Owl feathers. 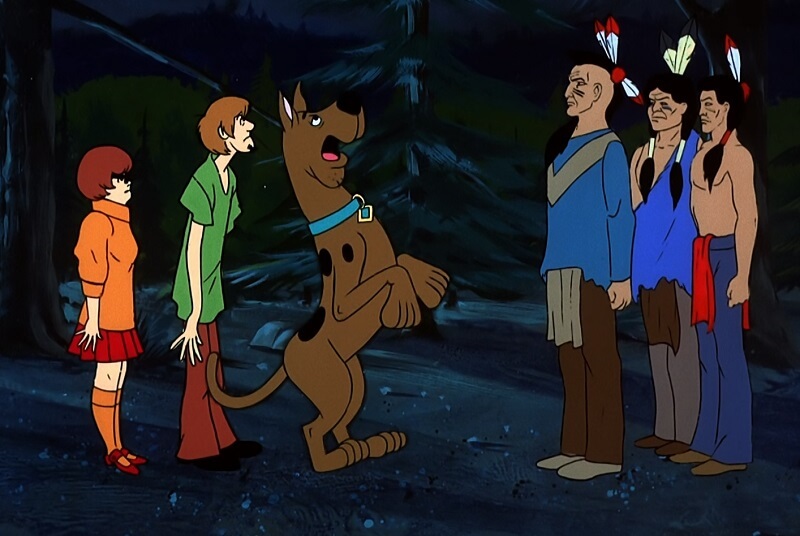 They also bump into Red Herron, who is a friend of Uncle Dave. Red Herron explains that Grey Fox had heard the Willawaw call Uncle Dave’s name, and when that happens, the owl swoops down from the sky and carries you off. Grey Fox, by the way, is voiced by future Scrappy voice actor – Lennie Weinrib.

Shaggy explains they’ve already seen the Willawaw and Red Herron tells them to go as that means one of them will be the next victim.

Velma refuses to leave until they find Uncle Dave. As it’s late, Freddy and the girls stay in the lodge for the night, and Scooby and Shaggy go guard the boat.

As Scooby and Shaggy make their way to the boat, the Willawaw swoops down and gives them a scare. After hiding, they soon realize this is just a regular owl, but it calls out Scooby’s name, terrifying our cowardly duo once more. 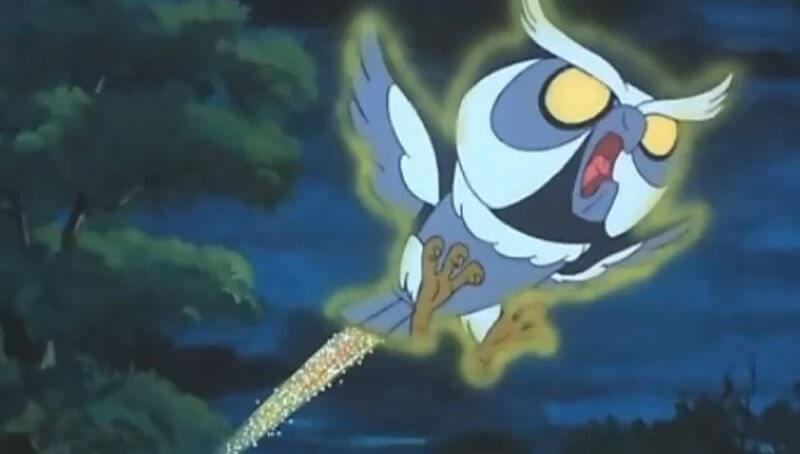 In the motor boat, the soon see the real Willawaw, and Scooby fires up the motor boat by accident. The boat launches across the bay as the Willawaw chases the Scooby and Shaggy until they eventually end up in a cave at the picture rocks.

In the cave they both find footprints and wheel tracks, but are soon chased off by the call of the Willawaw. 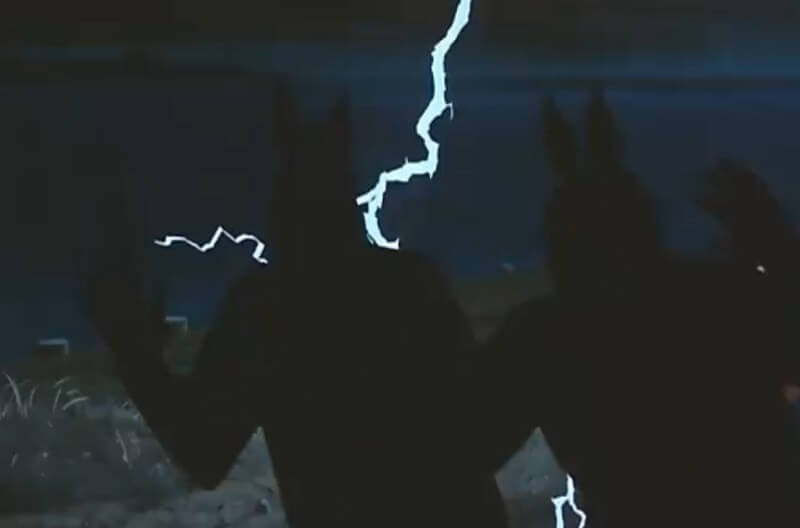 Daphne, Velma and Freddy set off to find Scooby and Shaggy and they find an Indian Pictograph on the ground. Velma deciphers the pictograph which says ‘Danger’ and assumes Uncle Dave wrote it to ward anyone off searching for him. 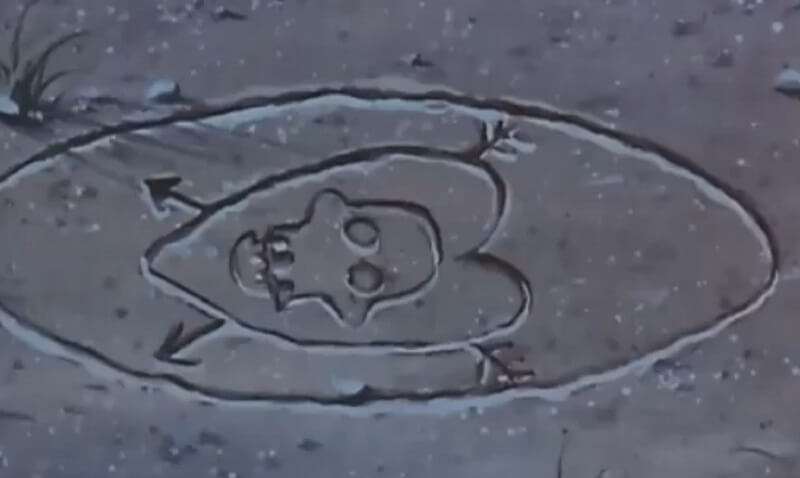 They also confront the Owl men, which are two owl like humanoids. The owl men chase them into the cave and Freddy, Velma and Daphne hide in a room which is full of cans of kerosene and sand bags. 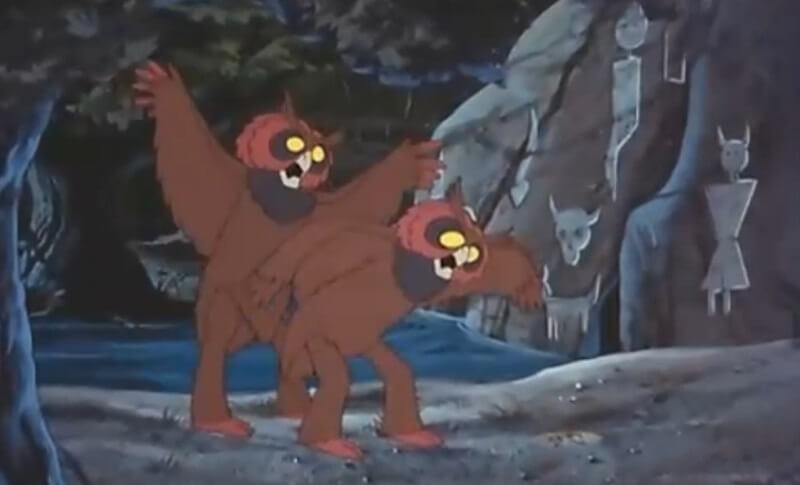 We then cut back to Scooby and Shaggy who come to a locked door. Scooby picks the lock with is tail where they find racks of ladies fur coats and other luxury items like giant colour tv sets, paintings, stereo equipment and silver statues. They also find two giant owls. 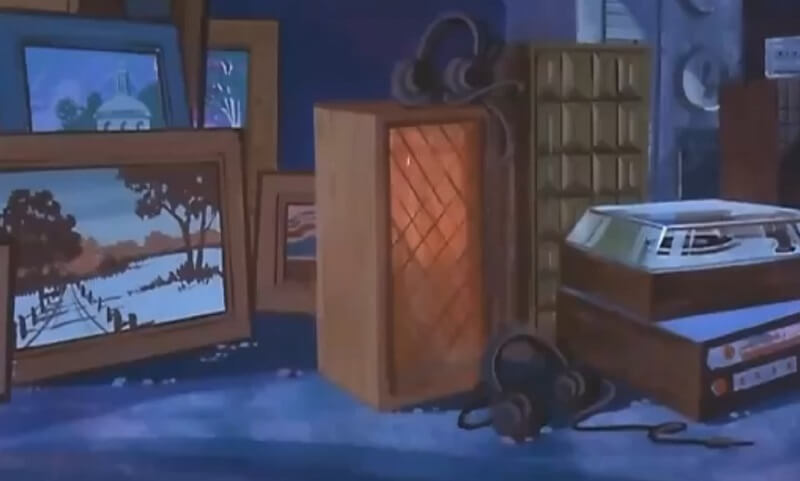 Back to Freddy and the girls, Freddy has set a trap which catches the two owl men. Instead of two villainous henchmen, we discover that it’s Scooby and Shaggy in the owl costumes.

Shaggy tells them about the treasure room and Velma explains that this mystery is making a lot more sense.

Freddy creates a new plan as we cut to several scenes of Red Herron tracking down the gang. Freddy’s plan nearly fails as Shaggy and Scooby get chased once more by the Willawaw, but eventually the flying fiery creature is caught. 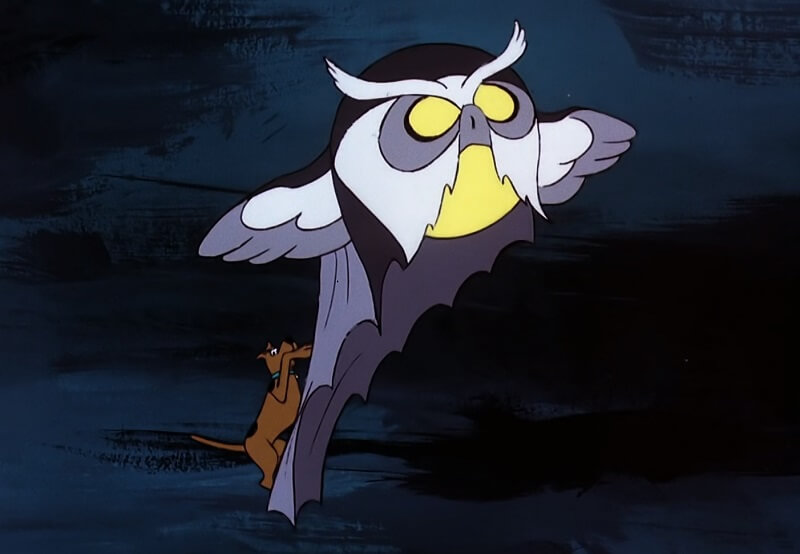 We soon discover it’s just a helium balloon with an owl costume. Scooby also lands on Grey Fox, the mastermind of an international smuggling ring. The Sandbags and Kerosene were used for the jet powered helium balloon. The williwaw’s terrible shriek was made by the jet engine and the Willawaw legend was to scare everyone off. Velma further explains that Grey Fox was smuggling the treasures into Canada 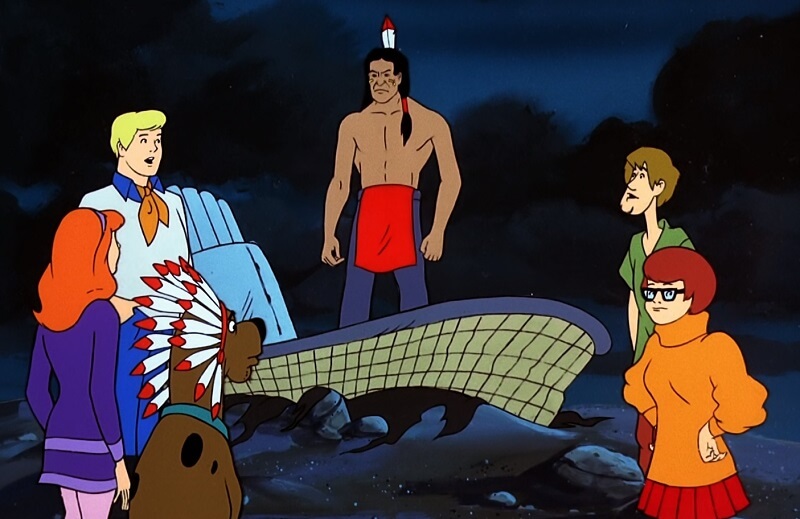 Uncle Dave shows up after Red Herron finds him. Grey Fox had figured out that Uncle Dave figured out what was truly going on and had the owl henchmen capture him. Red Herron explains that Grey Fox will be punished accordingly by his tribe. 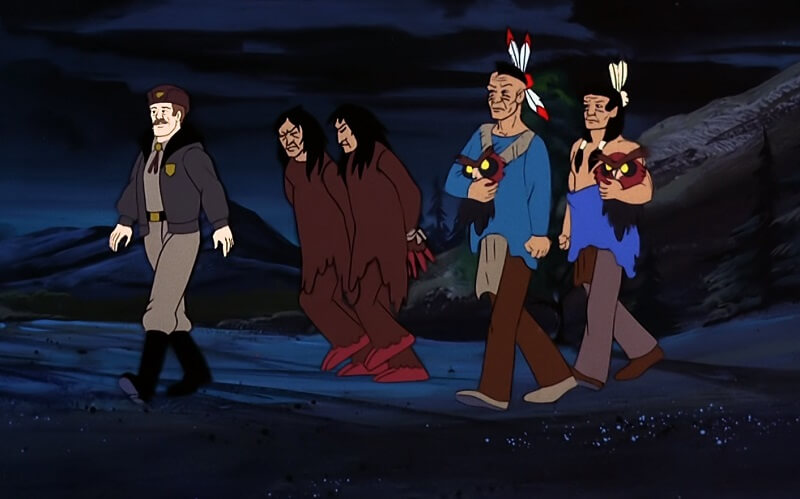 With another mystery solved, the gang head off to Uncle Dave’s cabin for a big feast.

I give this episode a 7.5 out of 10. I thought there were a lot of cool moments, but I found this episode had too much in the way of filler. There are a lot of scenes of Scooby and Shaggy being clumsy and while funny I found this also took away from any spookiness of the episode. Instead, I wish they used some of this time to add more mystery to the plot.

The owl men look silly too, and the design makes them look like mascots for a high school sports team. The Willawaw, while cartoony, at least looked cool and I applaud the writers in at least trying something different.

Reading reviews and opinions of other Scooby fans I hear a lot of people complaining that episodes like this that involve different cultures are racist and offensive. I’m a white middle aged man living in Canada so I have no say on the subject. I think the topic is interesting and worthy of discussing, but I’m the wrong guy to express an opinion on it.

Most of the episode takes place at night or in a cave, and I certainly liked that, but if you happen to get this episode on Blu-ray, it looks like garbage. When they transfer this to high-def, a lot of flaws come out so there are lots of scenes where big white blobs mar the background scenery. 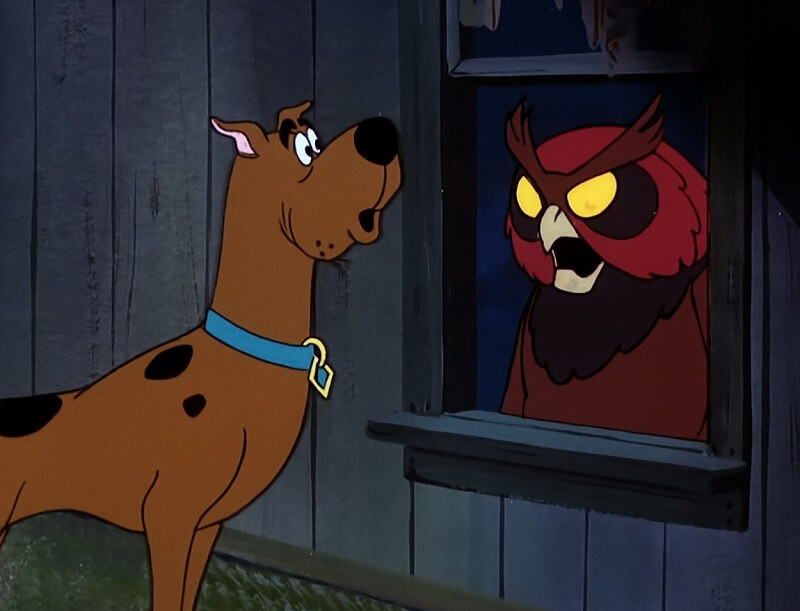 Anyway, I thoroughly enjoyed this episode, and felt it was a nice change of pace. Join me next week where I will be discussing a Creepy Tangle in the Bermuda Triangle. 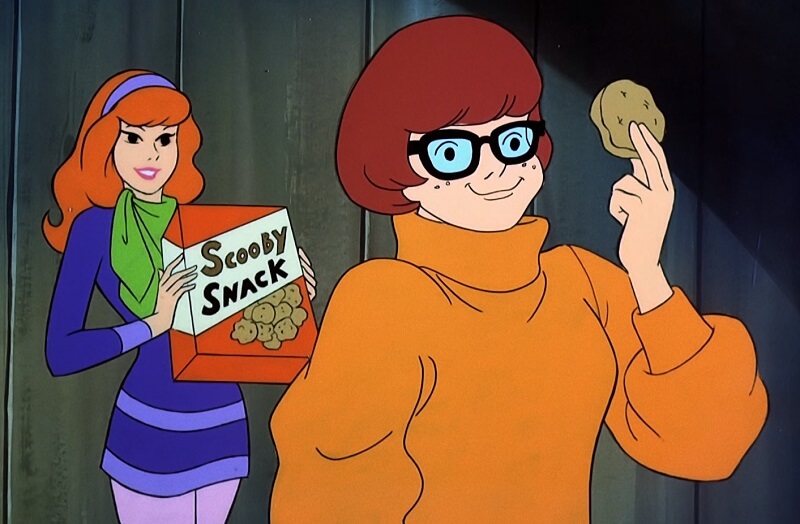 A Creepy Tangle in the Bermuda Triangle