A Highland Fling with a Monstrous Thing is episode 6 of the third season of Scooby Doo Where Are You and sees the gang encountering the Loch Ness Monster. It originally aired on October 13, 1978.

I was super excited to review this episode as I am part Scottish, and back when I was a kid, my Grandfather had shown me a picture he owned of the Loch Ness monster. This had me fascinated with this wondrous sea monster, so when I saw this episode as a kid, it had become one of my favourites.

As time passed, and the decades rolled by, I had forgotten all about this episode until now.

So enough of my jibber jabber, lets get on with the review. 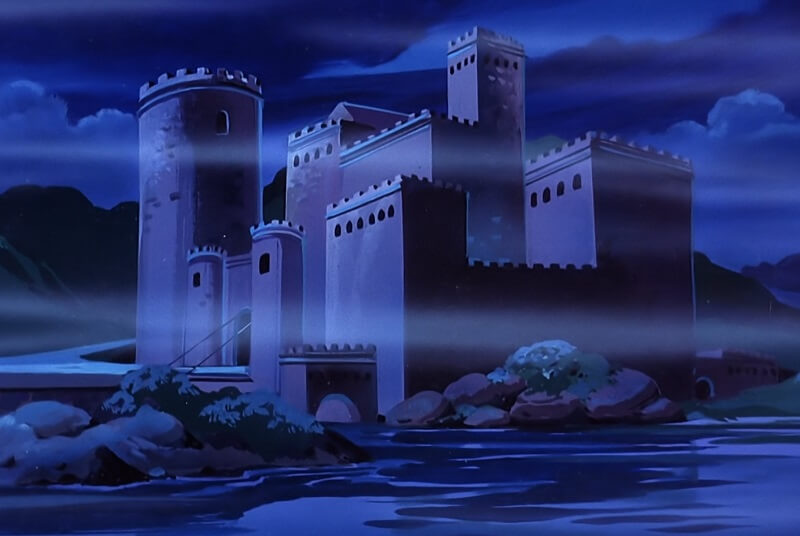 The episode begins with an exterior shot of Castle McDuff, a tourist site in Scotland. All of the tourists are running out of the castle in fear. Aggie McDuff pleads for them to stay, however, the tourists all drive off in their cars. 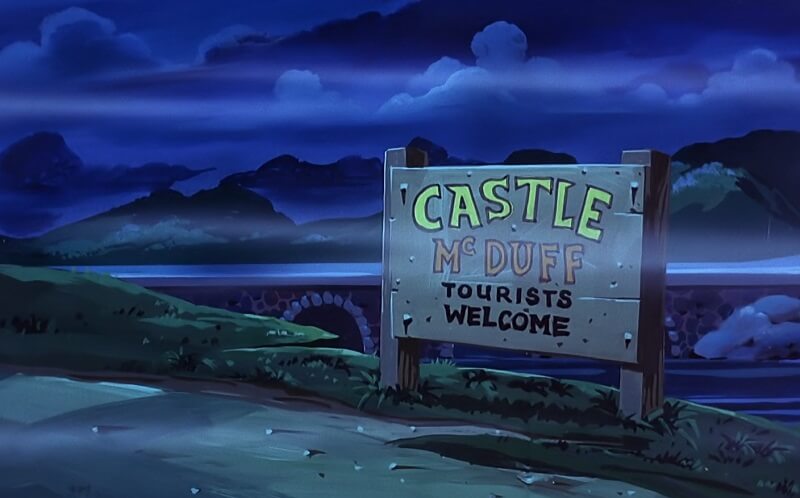 Aggie then calls Velma, and urges her to come that night. After hanging up the phone, Aggie lets out a scream as a serpentine shadow moves across the wall.

In the Mystery Machine the gang are nearly lost in the Scottish Mist. Daphne wants to pull over and resume driving in the morning, but Velma is insistent they move on as Aggie is in trouble.

Freddy nearly drives off a cliff, but Velma isn’t too concerned. She explains it’s Lochness, so they must be close to the Castle. The gang also hear bagpipes and are frightened as they see an old Scottish highlander on the cliffs playing the pipes. 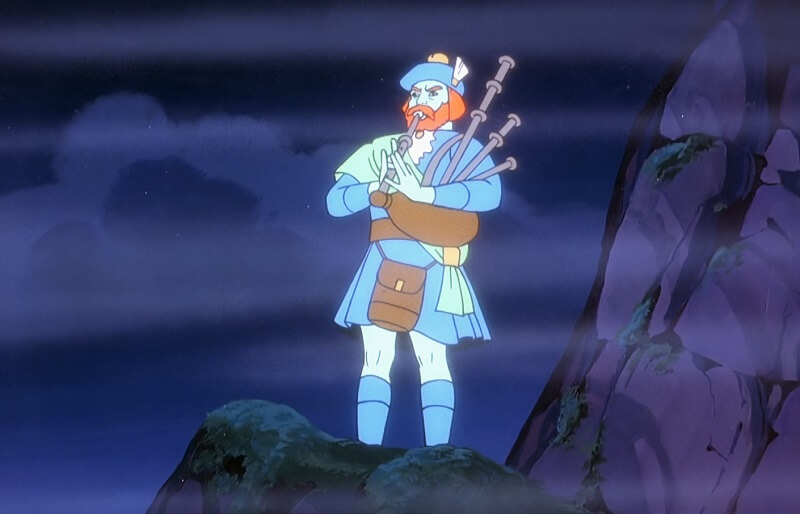 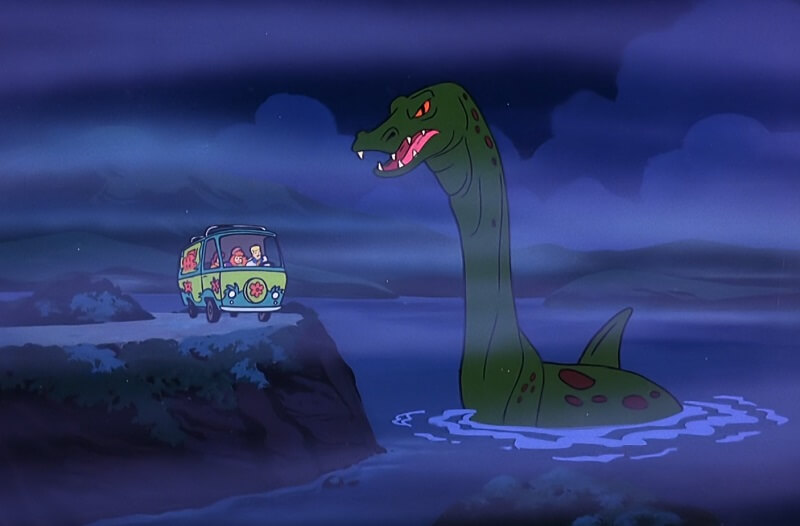 The Lochness monster then shows up and acts aggressively towards the Mystery Machine, so Freddy takes off. Where they end up at the Jolly Scott Inn.

Asking for directions to the castle, where the Inn Keeper, named Neil Dunwoody, angrily explains the Inn is full, and tells them to stay away from Castle McDuff after pointing them in the right direction. 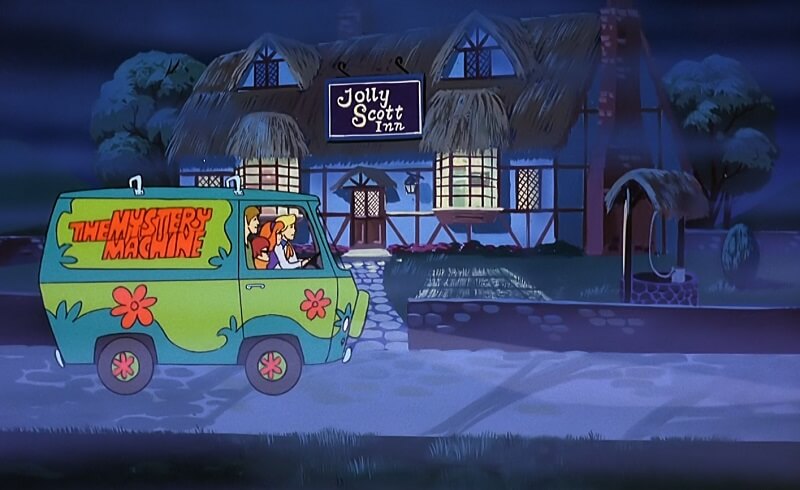 Velma is suspicious of the Inn Keeper, but before we can learn more about her suspicions, the gang end up the castle.

At the front gate they meet Jamie Craigmore, the chief of staff. Jamie brings them to Aggie and they all discuss the ghost who is Aggie’s great grandfather (Finnian McDuff) who she suspects is angry she turned the castle into a tourist attraction. 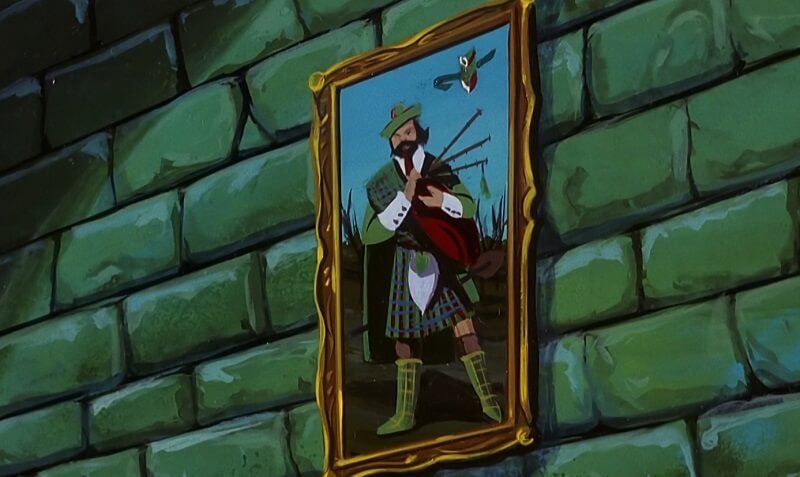 Jamie shows the gang to their rooms so they can relax a bit, and they can discuss the events in the morning.

The gang do not sleep well as the Lochness monster shows up and gives Scooby and Shaggy a scare. The two wake up Freddy and the girls and we see Finnian McDuff playing the bagpipes as his apparition floats above the castle. 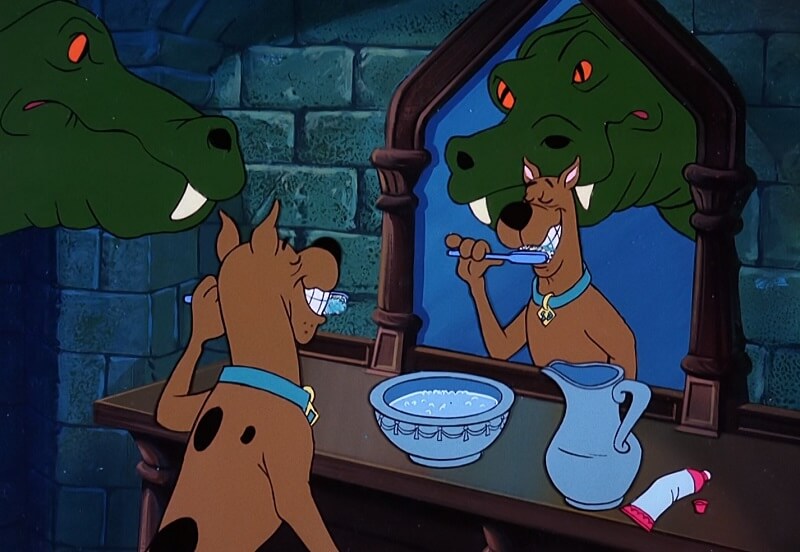 The gang split up to look for clues, with Scooby and Shaggy going one way and Freddy, Daphne, Velma and Aggie going another way.

Scooby and Shaggy are the first to discover a clue on a partially burnt piece of paper that says Switzer and 100 Wrist Watch. Before they can find the rest of the gang, they fall through a trap door that brings them to the castle dungeon.

Up where the ghost of Finnian McDuff disappeared, Velma finds a weather report from today’s paper that says “Heavy Fog Tonight in Loch Ness Area” Aggie is confused as what would a ghost be doing with a weather report. 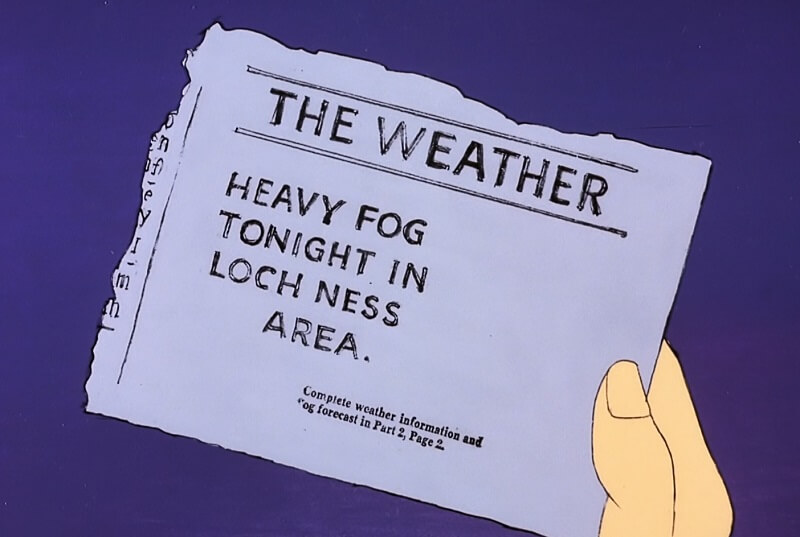 Scooby and Shaggy make their way out of the dungeon where the ghost of Finnian McDuff gives them a chase. 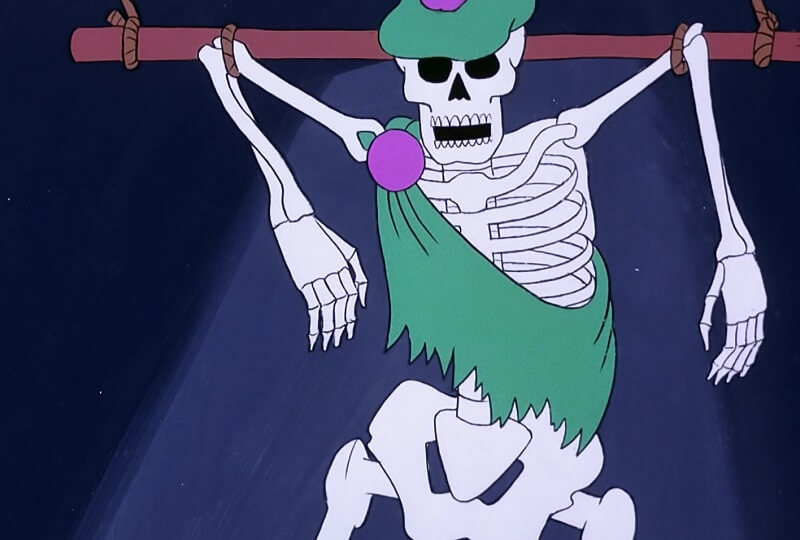 Aggie brings the gang to an area of the castle that has been closed for centuries. There, they find footprints in the dust. The gang also get separated and Scooby and Shaggy get lost and then locked in a room.

Back to Freddy and the girls, Aggie explains that people can also get into the castle through a boathouse. Freddy finds a room where the hinges have been sprayed with oil and when they look inside they see hundreds of crates that are stamped with “Made in Switzerland” 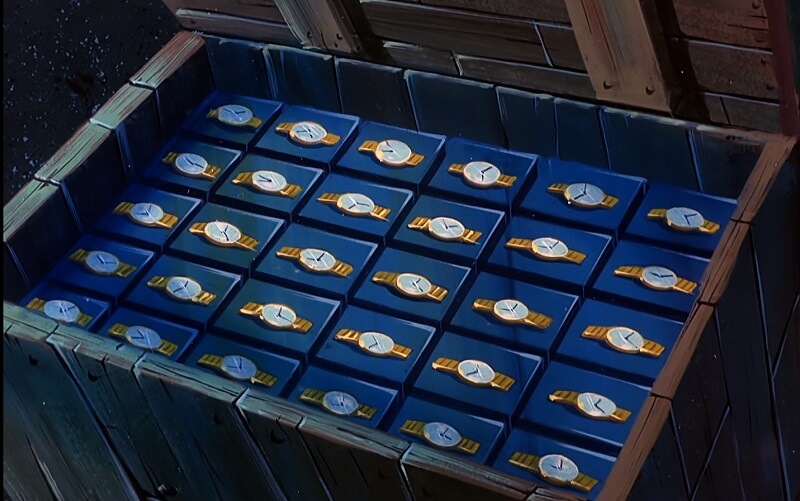 Opening the crates they find brand new wristwatches. Freddy and Velma now know what’s going on and Freddy begins his plot to trap the ghost..

Scooby and Shaggy are now outside in the boat house area and are chased by the ghost of Finnian McDuff. Scooby manages to get his paws on some bagpipes and begins playing them. As he starts up the Lochness monster approaches.

The ghost then shows up and plays his bagpipes. Velma and Daphne notice that the Lochness monster is following his music so they get Scooby to play his bagpipes even louder. 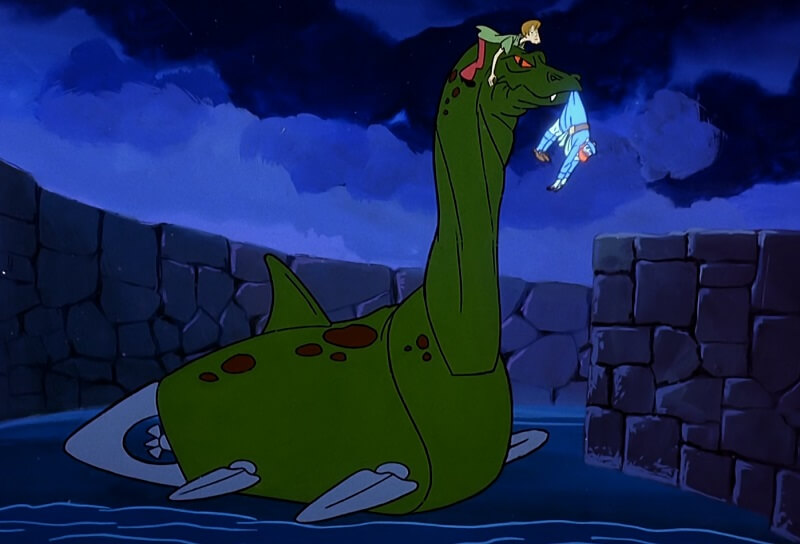 Eventually the sea monster follows Scooby’s notes and they end up capturing the Ghost of Finnian McDuff. Freddy pumps out the moat water and reveals that the ghost is Jamie Craigmore.

Mr. Dunwoody the Inn Keeper shows up and explains that he was worried. Velma and Freddy then explain that Jamie was a wrist watch smuggler, and used the legend of the Lochness to scare tourists away so he could go about his smuggling in private. The Lochness monster was also a miniature submarine that he was using to smuggle the watches in. The submarine was remote controlled by the sound of his bag pipes.

The wire they find was to create the illusion that the Ghost of Finnian McDuff was floating.

I don’t feel this episode is legendary, but I did enjoy it. I am partially Scottish, so I might be a bit biased.

What I enjoyed most about this episode was the opening where the gang were lost in the fog. I always enjoy seeing the dynamic between the 5 characters just being kids.

I also liked the take on the loch ness monster, and thought the bag piped ghost was rather clever as he controlled the sea monster with the sound of his bag pipes.

The ghost himself wasn’t all that intimidating. It’s hard to be too frightened by anyone in a kilt.

This episode also focuses way less on Freddy, Daphne and Velma and turns the Scooby and Shaggy gag scenes up to 11 and that’s something I dislike. While I always liked the comedy in Scooby-Doo, I don’t find it’s balanced with the spooky factor very well in season 3. I’d rather they’d spend more time creating a spooky atmosphere like we saw with season 1 of SDWAY then on the jokes.

Still, a fun episode, but a bit forgettable. My review of 8 might seem a bit high but I still think it’s a fun well made episode, and there’s nothing to complain about here. 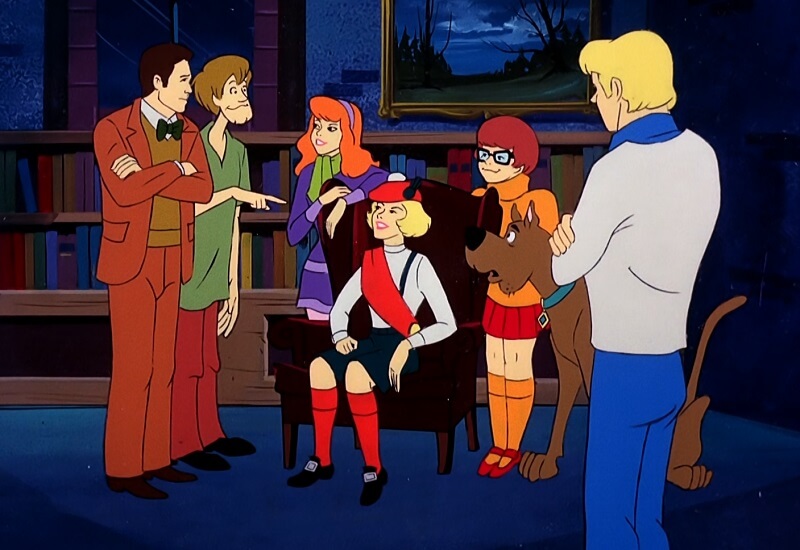 Make a Beeline Away from that Feline