This episode sees the gang in England where they come across a Tennis Athlete by the name of Jimmy Pelton, who has been cursed by a Warlock named Amthos.

The Warlock of Wimbledon – Episode Review

The episode begins with tennis star, Jimmy Pelton, and his trainer, Nick Thomas, out for an evening jog.  Jimmy is in training and has an important tennis game at Wimbledon the next morning. 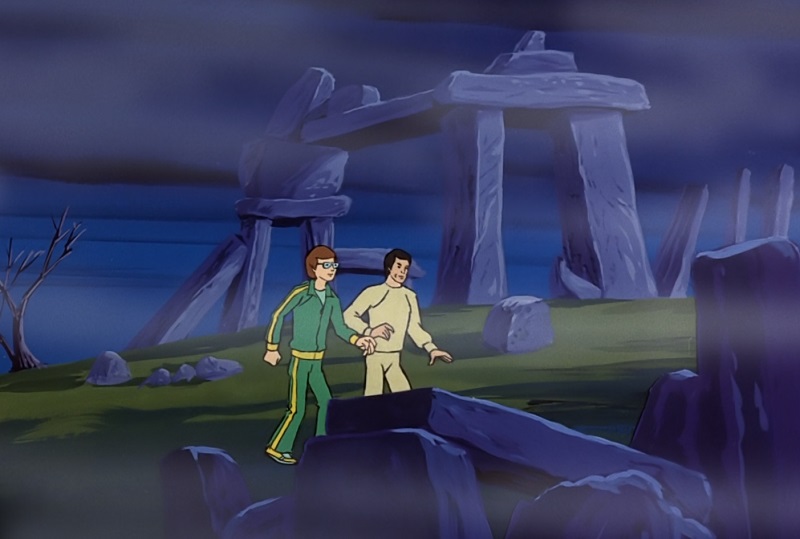 The two of them come across the ancient Druid ruins of Rothmore, where they discover an ancient staff. Jimmy picks up the staff and smoke begins to emerge from the eyes. Tossing it like a Javelin, the staff seems to explode, and from the clouds, the a Warlock named Amthos, and his hound from hell emerges. 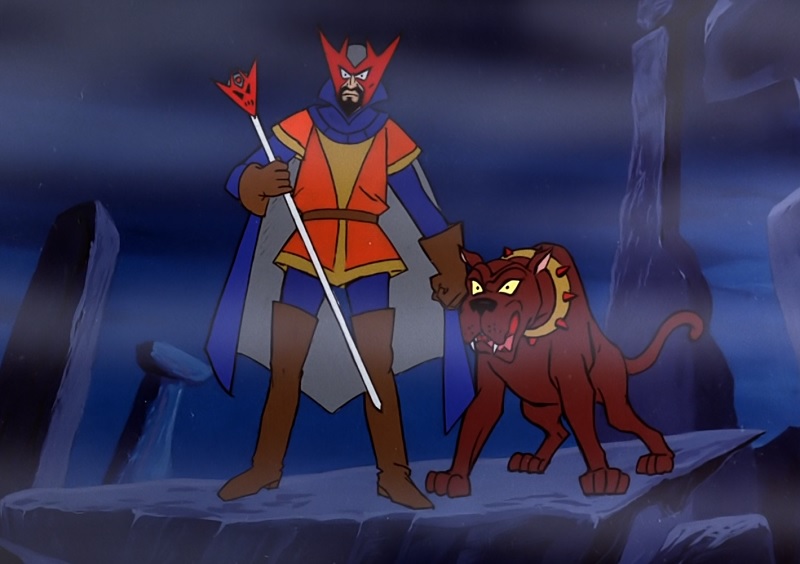 The Warlock proclaims he’s back to fulfill his curse on the Pelton family and seeing as Jimmy is the last of the Pelton family, Jimmy is doomed. The Warlock tosses the staff back to Jimmy and Nick tells him to ditch it, before the pair make their escape from the evil Warlock.

Meanwhile, the gang are on their way to sight-see the Ruins of Rothmore, although Freddy is having some issues navigating due to the dense fog. Running out into the middle of the road, Jimmy and Nick stop the Mystery Machine and explain their situation to the gang. Scooby is at first pleased to hear about a magician but is soon terrified as Shaggy explains that a Warlock is more like an evil wizard.

In the Mystery Machine, Jimmy introduces himself, and Freddy is star struck. John has Freddy drive him back to his nearby castle. It is his family home that they had to sell off during hard times, but with his tennis success, John was able to buy it back.

At the spooky castle, they meet John, the rather stern and serious gatekeeper. Inside, we also meet Mrs. Warren, the housekeeper. Scooby and Shaggy take an instant shinning to her as she offers them a platter of pastries. 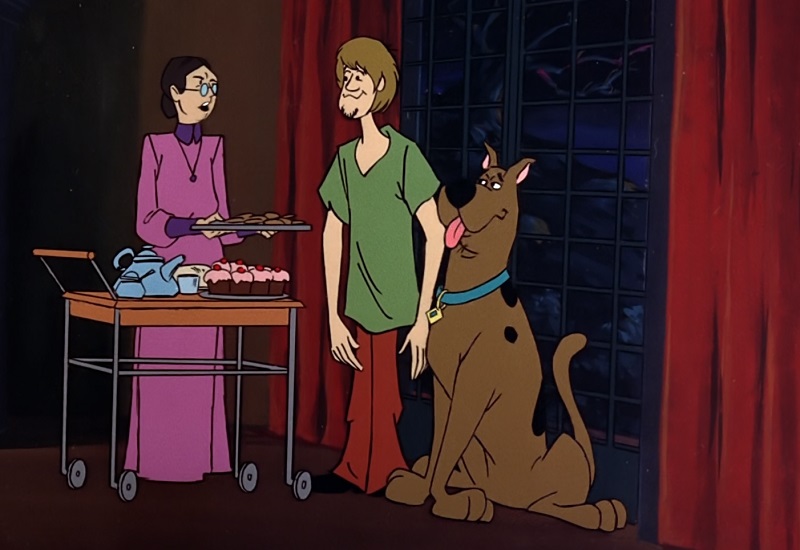 Inside, over tea, Jimmy wonders why the Warlock would show up today, after all these years. Mrs. Warren asks Jimmy for his cup to read the tea leaves, and looking in, she immediately sees “Danger”.

We don’t have long to wait for danger to appear, as the Warlock barges in and once again threatens Jimmy. Before he disappears, the Warlock leaves behind the cursed staff.

The gang chase after the Warlock to see if they can catch him, and out in the fog, they hear John, the gatekeeper, cry out for help.  Running to John’s house, they discover that John is missing, and the gatehouse is ransacked and covered with red paw prints.  They also find John’s boots splattered with red mud. 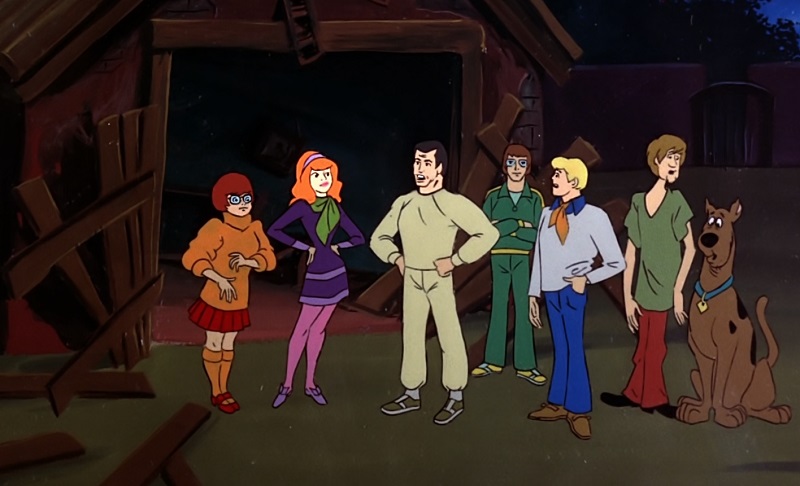 Following the red paw prints, they arrive at an empty field where the paw prints end.  Arriving on a bicycle, Mr. Burgess, Jimmy’s solicitor (basically a lawyer), shows up and asks what is going on.  Mr. Burgess suggests they all go back to the house where they can tell him all about it.

Scooby and Shaggy warm up in front of a roaring fire, while Jimmy and Nick explain to Mr. Burgess the night’s chaotic events.  Mr. Burgess exclaims that he always feared that this would happen.  In ancient times, Amthos was accused of witchcraft, and it was the Pelton family that was responsible for driving him off the land.

In response, Amthos cursed the Peltons, and shortly after, they went into massive debt and were forced to sell the castle.  Because Jimmy used every penny he had to buy the manor back, and Mr. Burgess says that he’ll need to win the tournament tomorrow, or else he won’t be able to pay his mortgage and he’ll be forced to sell the manor once again.  With that bleak detail, Mr. Burgess, in true British tradition, leaves on a chipper note.

Freddy gives Shaggy the Warlock’s staff and tells him to get rid of it.  Shaggy and Scooby head out into the fog and try to toss it into the pond.  Their efforts to dispose of the staff fail, as Amthos emerges from the pond and throws the staff back at them.

Shaggy and Scooby run back to the Tennis courts, where Jimmy is getting in some extra practice.  Fred is a little miffed that they still have the staff, but Shaggy explains that the Warlock wouldn’t let them get rid of it. 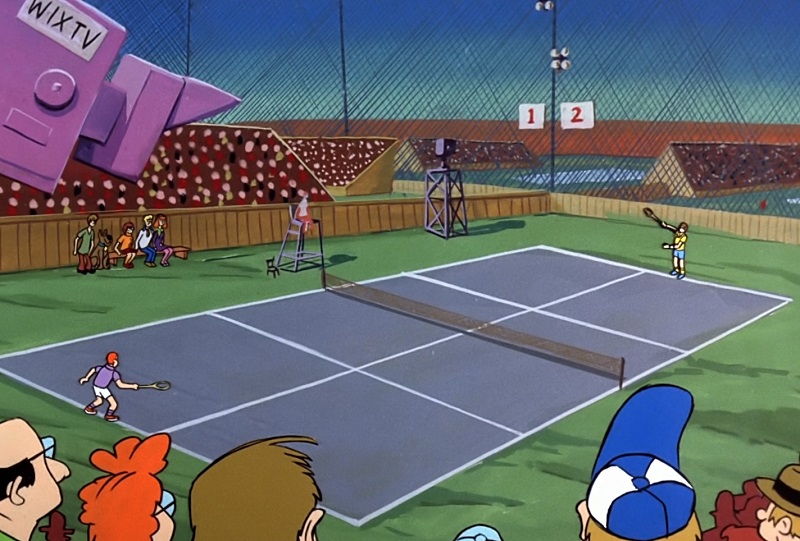 The Warlock appears and mocks them with his dry British laugh, and his devil hound chases Nick off the tennis courts.  Jimmy chases after Nick but trips and loses his glasses.  The rest of the gang chase after Jimmy before he can hurt himself and find him near the staff, which is impaled in the ground by his glasses.

In a fit of rage, Jimmy breaks the staff in two and chucks the pieces aside.  The headpiece’s eyes begin to glow, but neither Jimmy or the gang notice.

Back in the ruins of Rothmore, Jimmy and the gang look for clues.  Here, Velma finds more mud, that matches the mud she found on the gatekeeper’s boots.  Jimmy tells her that this is the only area where that mud can be found.

Upon hearing the devil hound’s howls, the gang head back to the manor where they find the staff restored, and a note is attached that says, “If you play tomorrow, it will mean your doom!” 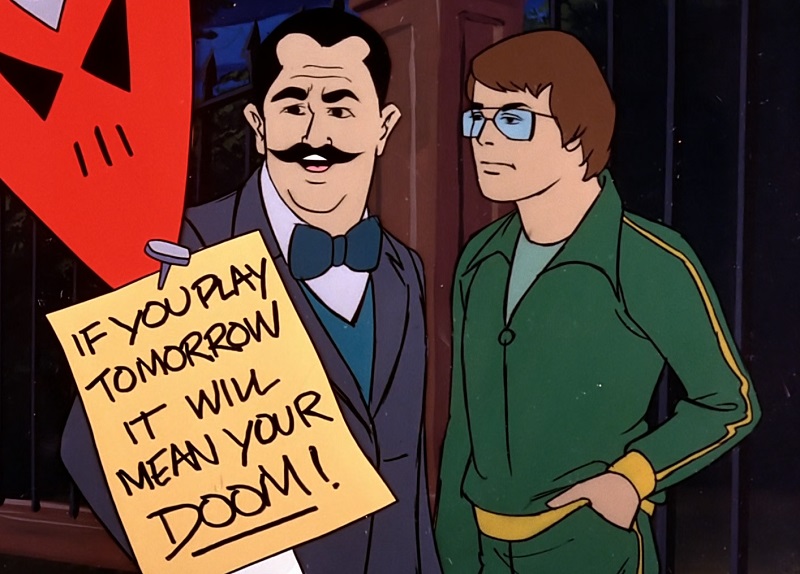 Mr. Burgess happens to wander by and advises Jimmy not to play at Wimbledon.  However, Jimmy declares that the show must go on.

In the morning Freddy drops Velma, Shaggy, and Scooby off at the ruins, where they once more look for more clues.  Freddy then drives Nick, Daphne and Jimmy off to Wimbledon for Jimmy’s big game. Shaggy finds the first clue pretty quick when he falls through a sinkhole and lands in an underground secret chamber.

Inside the chamber, dozens of woodworking tools and piles of sawdust are strewn about.  Velma also finds several wooden poles leaning against the wall.  Velma also finds a bill of sale that says ‘One Pair, Spec Lens.’  Scooby also finds boots with red paw prints on the bottom.

Before they can snoop around any further, the Warlock shows up and chases all three of them to Wimbledon by way of a row-boat chase. 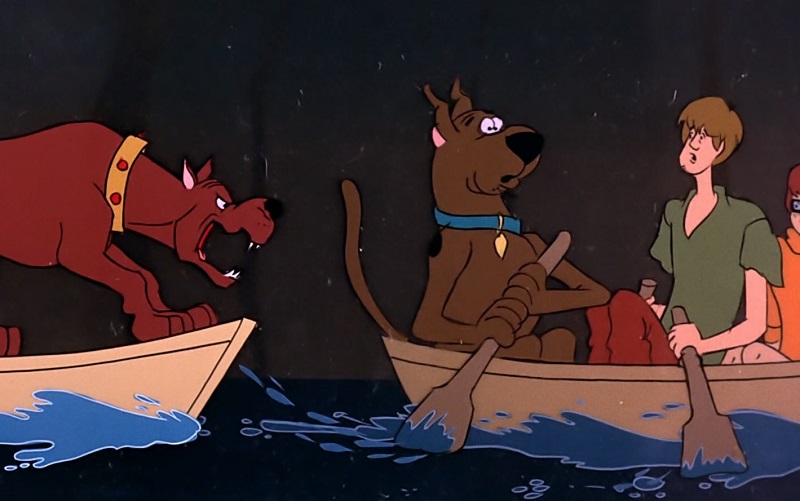 At Wimbledon, the tournament is afoot, and Jimmy is in the lead.  His game is soon squashed as he begins seeing the Warlock sitting in random spots among the audience. 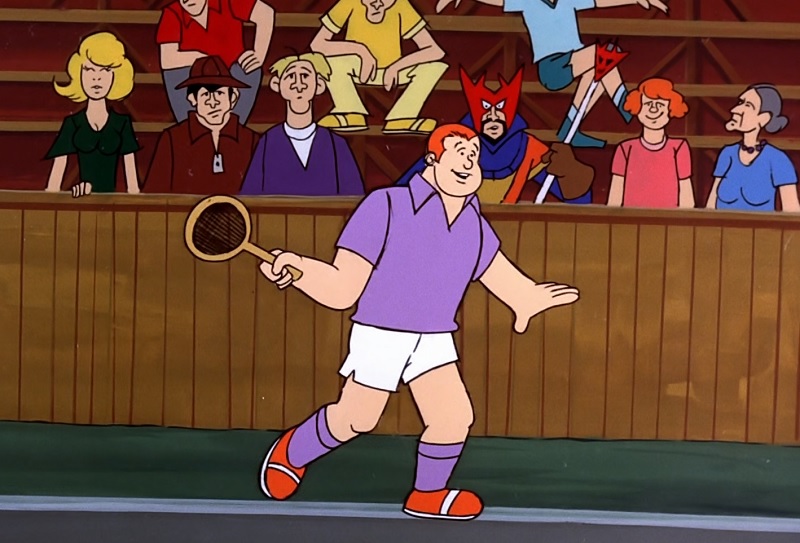 During the intermission, Jimmy tells the gang about his dilemma, but Freddy writes it off as mental strain.  However, during the game, Jimmy slips and his glasses fall off.  Knowing how it feels to be blind as a bat, Velma scoops them up and realizes that there is something fishy about them.

Trying the glasses on, Velma figures out the mystery and hands Jimmy her glasses instead.  We also see Velma pull a second pair of eye glasses out of her back pocket which she probably carries around as she loses her eye-ware so often.

Jimmy ends up making a comeback, however, the Warlock still taunts and heckles him from the sidelines.

Even though the audience, Wimbledon security and referees, can now see the Warlock, the game continues, and Jimmy ends up winning.  Somehow, through all the drama, Fred takes his eye off of Scooby and now sees Scooby being chased throughout the tennis stands by the Warlock and his devil hound. 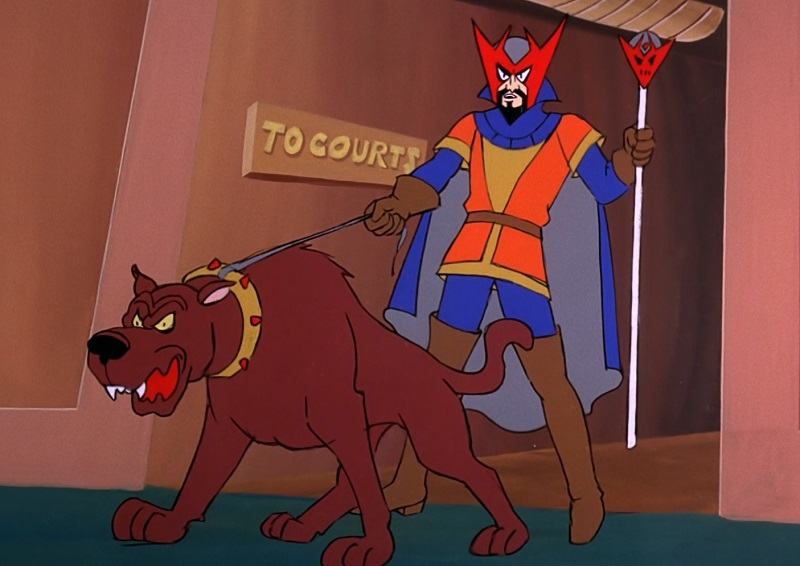 Velma reveals that there is a second Warlock on the loose, and puts Jimmy’s glasses on a television camera.  Pointing the camera at the crowd, and using the glasses technology, she finds the second Warlock in the audience allowing the Wimbledon security to capture him.

At the Police Station, Velma explains that Jimmy had special glasses on so that the bearded man they caught could wear invisible makeup, which would show up as the Warlock disguise.  Velma was clued into the trick by the bill of sale she found.

Velma then rips the beard off the man and reveals him to be John, the gatekeeper.

Velma also explains that the mud on his boots made John a suspect as that mud was only found at the ruins.  She also explains John had special boots with paw prints to make it look like the Devil Dog had carried John off the property.

Nick (the trainer) explains that John (the gatekeeper) and him are brothers, and decedents of the Amthos clan.  They wanted Jimmy to lose the tennis match so they could buy the manor, and then the curse would be complete.  Quite the elaborate plan if you think about it, as Nick must have helped Jimmy train through hundreds of games over the years. Seeing as Jimmy also bought the manor recently, these two brothers could have bought the joint years ago as well.

I want to give this episode a 9, but I feel like it’s an 8.5.  For one, the Warlock isn’t that intimidating, and the whole cursed staff was a little too silly for me.  The special glasses to see invisible makeup was unique, but also incredibly silly.  Seriously, how does one apply invisible makeup, if you can’t see it?  (yeah, yeah, I know, I guess the person could wear the special glasses when applying it).

I did appreciate how it messed with Jimmy’s mind during the game, and that’s where this episode excels!  John and Nick’s revenge plot was incredibly psychological, so kudos there.

Another spot where this episode gains points in the Devil Dog.  That pooch was intimidating!  I don’t get why they’d have a real dog in disguise though, versus, just getting a more sinister-looking dog.

I wish they did more with the foggy landscape as the scene with Scooby and Shaggy at a pond was mega-cool!  However, since the main draw here is Wimbledon, I get why they had to get away from the ruins and manor.

Overall, this episode is excellent, and among one of my faves!

Don’t Go Near the Fortress of Fear