The Diabolical Disc Demon aired initially on November 18, 1978, as part of The Scooby’s All-Stars, and was later repackaged as episode 11 of the Scooby-Doo Show, which was repackaged once more as the third season of Scooby-Doo, Where are You.

This episode sees the gang visiting the Decade Records recording studio to watch their pal Jimmy Lewis. However, the building is haunted by a Phantom that looks to be a cross of Gene Simmons & Ace Frehley of KISS.

KISS, of course, released a made for TV movie called KISS meets the phantom of the park the same year, on October 28, which was produced by Hanna Barbera, and features tons of sound effects from Hanna Barbera cartoons. So I’m sure that tv movie helped influence this episode.

Being a huge KISS fan, this was an episode I was super excited to review, but is it any good? Let’s find out.

The episode begins with the Disc Demon cornering Tony Synes at Decade Records. The Disc Demon claims that Tony knows too much, and chases him about the studio. Before he is captured, Tony scrawls a message written as musical notes on a piece of sheet music.

Meanwhile, the gang are driving to the studio in the Mystery Machine to see their pal Jimmy Lewis. In the back, Scooby dances to Jimmy’s funky beats, which are playing on the radio.

Jimmy explains that Tony Synes, his songwriter, has disappeared and mentions that he’ll be recording the song that Tony wrote before he vanished. 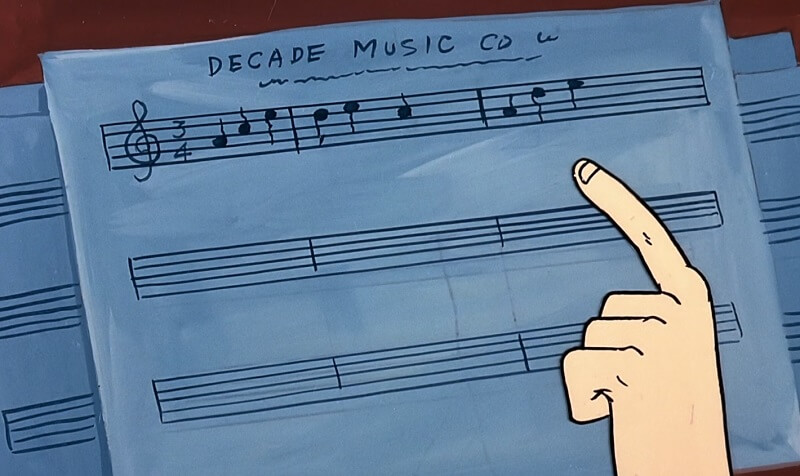 Tony then introduces the gang to Ian Barkin, his pianist and arranger, along with Ace Decade, the studio owner’s nephew, and Brick Tyler, the recording engineer.

As Ian starts to play Tony’s song, the studio equipment begins to malfunction, in that it explodes sparks everywhere. Ace Decade explains that all sorts of strange things have been happening since the Phantom has appeared. Jimmy adds that the Phantom is a ghost of a musician who is seeking vengeance on those who ruined his career.

While Brick finishes fixing the short-circuited equipment, Jimmy gives Freddy, Daphne and Velma a tour of the studio, while Shaggy and Scooby hide out in the recording studio to avoid the Phantom. Luck is not on their side, as the Phantom shows up and chases Scooby and Shaggy away so he can steal the sheet music.

In the shipping room, Jimmy notices that the Phantom has struck again as four stacks of albums are missing from the next day’s delivery. Shaggy and Scooby then appear to announce that they ran into the Disc Demon.

The gang head back to the recording room, and Brick and Ian are about to give up on recording upon hearing about the stolen sheet music. Jimmy saves the day by explaining that he has copies of the sheet music in his dressing room, so Scooby and Shaggy head over to fetch it for them 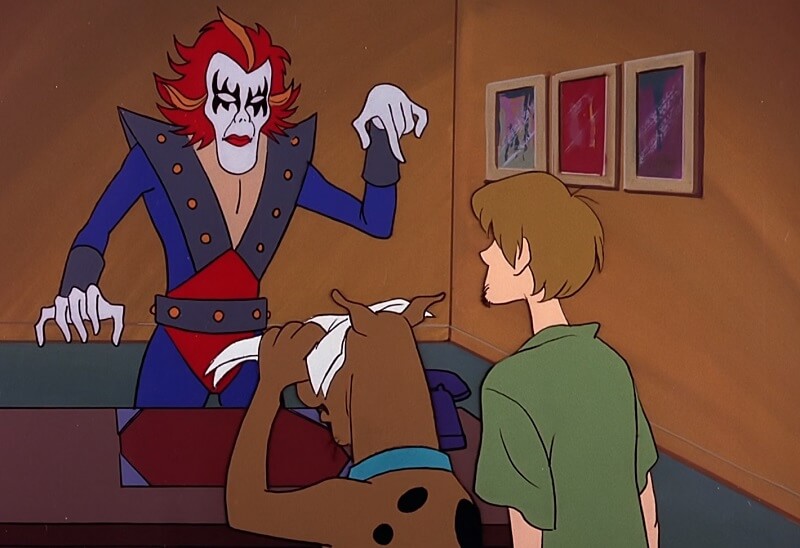 Once more, the Phantom appears, and tries to steal Ace’s sheet music. This time Scooby and Shaggy are able to evade the Phantom and run back to safety amongst the rest of the gang and Jimmy in the recording studio.

On the intercom speakers, the gang hear the Phantom threaten them. This startles Scooby and Shaggy, so they run out of the room, only to bump into Ace Decade as he walks in. Over the intercom, the Phantom continues to heckle the gang. Ace tells the gang that the offices have the intercom controls, so the gang split up to find the Phantom. 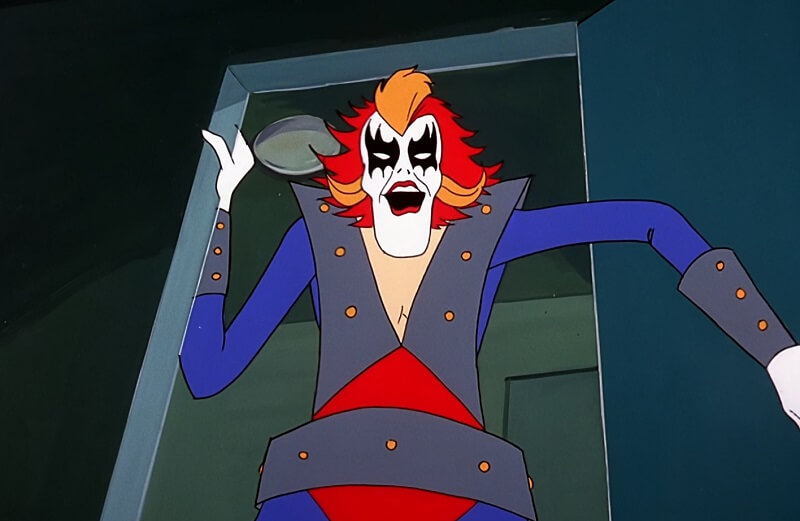 Instead of heading to one of the offices, Scooby and Shaggy head to the cafeteria. In Ace’s office, Freddy, Daphne, Jimmy, Ace & Velma find a tape recorder playing the Phantom. 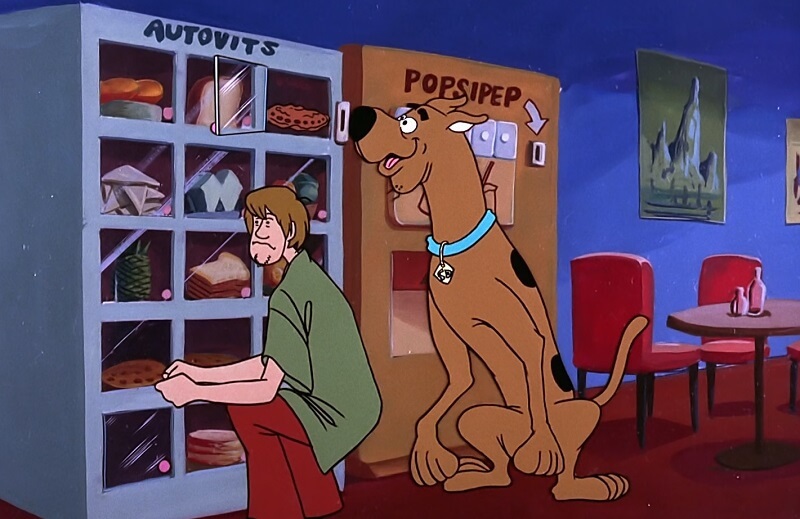 ‘s voice over the intercom. Ace is perplexed as he always keeps his office locked.

While trying to get back into the studio through an open window, Scooby and Shaggy accidentally knock over a garbage can that is full of hundreds of Jimmy Lewis albums. 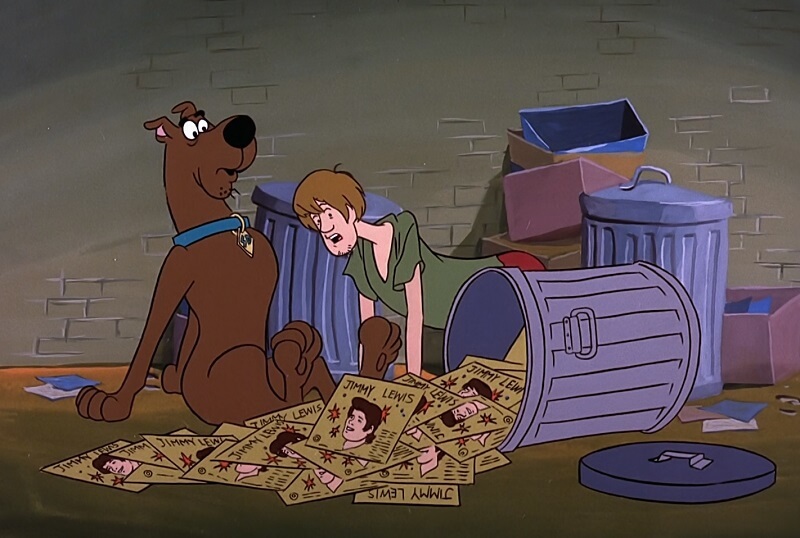 Back inside, Daphne is sitting at the Piano and is playing Tony’s latest song. Scooby and Shaggy do make their way back inside through an air vent and inform the gang of the tossed vinyl records they found. As Shaggy is explaining all of this, the Phantom sneaks in and tries to steal the sheet music once more. His attempts to steal the music fail and the Phantom ends up trapped underneath a pile of toppled recording reels.

Removing the mask, it turns out to be Ace Decade, the studio owner’s nephew. The albums in the garbage were so he could sneak records out and sell them for his own personal profit. Velma also reveals that the sheet music spells out ACE DECADE if you transcribe the musical notes. The Phantom was just a cover for his smuggling operation so that people would stay away. 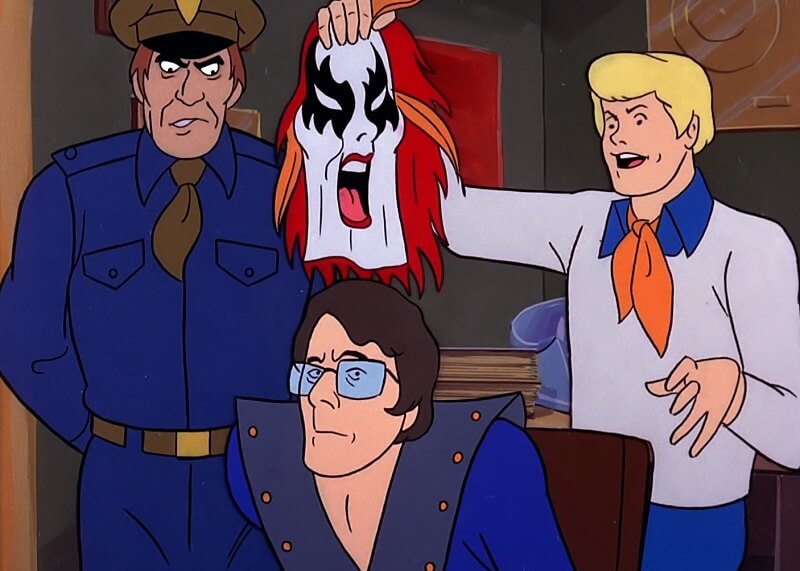 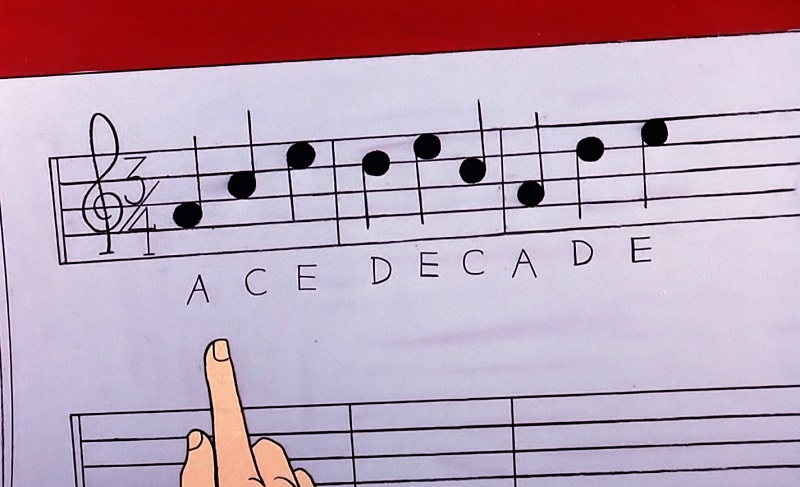 Wondering as to where Tony could be, Scooby and Shaggy lead the gang to the storage closet, where Tony is locked up. Tony had scared them earlier as he thought the pair of them was the Phantom. 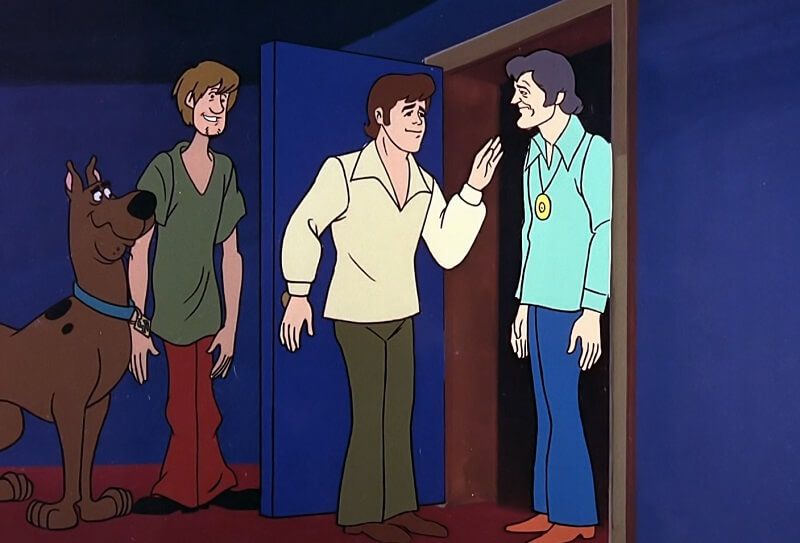 I give this episode a 7.5 out of 10. I really wanted to give it a higher grade, but after watching the awesome episodes of Make A Beeline and Creepy Creature of Vulture’s Claw, this one was a bit of a let down.

Overall, the concept is interesting, and I like the design of the Phantom as it reminds me of the band KISS, to which I’m a huge fan of.

The plot itself is weak, in that there is next to no mystery, and there are a lot of comedic scenes to pad out the running time. I think, had they spent more time with the side characters like Brick, Joe, Ace and Ian, they could have presented a better mystery here.

Instead, these characters wander in and out with very little to do, and it’s hard to distinguish one character from the next.

How the Phantom’s career was ruined was never explained either. I wish they had a flashback scene to better understand his vengeful quest. Given the lore of rock ‘n’ roll, the writers could have gotten creative with his backstory. 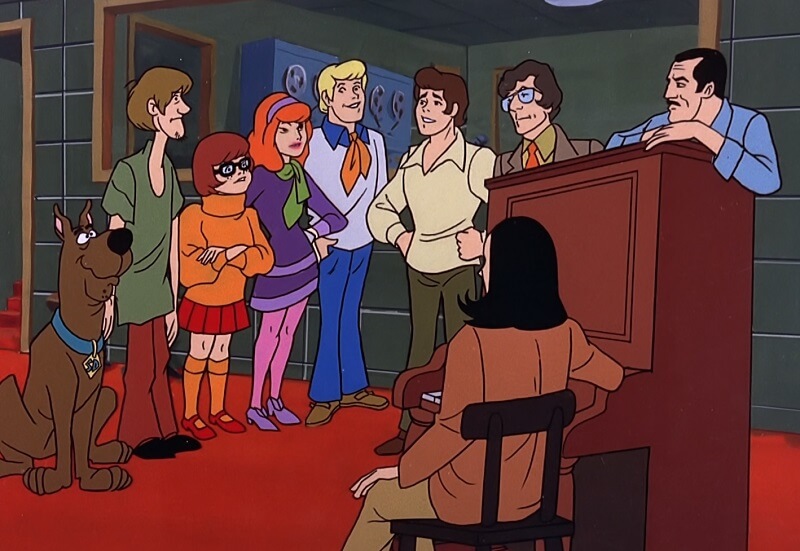 Nothing here is spooky, and the Phantom is not at all intimidating. Many of the set pieces, like the cafeteria, recording room, dressing rooms and offices, are bland as well. We also have a wasted opportunity where we could have had a legit musical guest star contribute a song to the show.

This makes for an average episode of Scooby-Doo, but given the fun design of the Phantom, it gets a slightly above average grade for me.

Once again, thank you for any likes, subscribes and views. I appreciate them a ton. I wish I could allow comments on my videos, as I enjoy hearing your thoughts, but the YouTube rules dictate I have to categorize my videos as made for kids, and it won’t allow me to have comments, or even the subscribe button.

Join me next week when I will be covering Scooby’s Chinese Fortune Kooky Caper. Until then, stay spooky.