Vampire Bats & Scaredy Cats originally ran as a segment of Scooby’s All Star Laff-A-Lympics on Sept 17, 1977.  Later on it was repackaged as the second episode of the Scooby-Doo Show season 2.

If you haven’t watched this episode, like all my reviews, Spoilers Galore!

The episode opens up with the Gang, along with Scooby-Dum on a boat.  They are off to see Daphne’s friend Lisa, for her 18th birthday.  Lisa is about to inherit a hotel on Great Skull Island (not to be confused with Skull Cove from Go Away Ghost Ship).  Great Skull Island, according to Velma, is rumoured to be inhabited by Vampires.

Just after they dock, the ferry captain asks them to take a box to the hotel for a hotel guest named Mr. Dracul.   Fred is more than happy to oblige, however when Shaggy helps him load it into the mystery machine, they accidentally drop it, revealing a coffin. 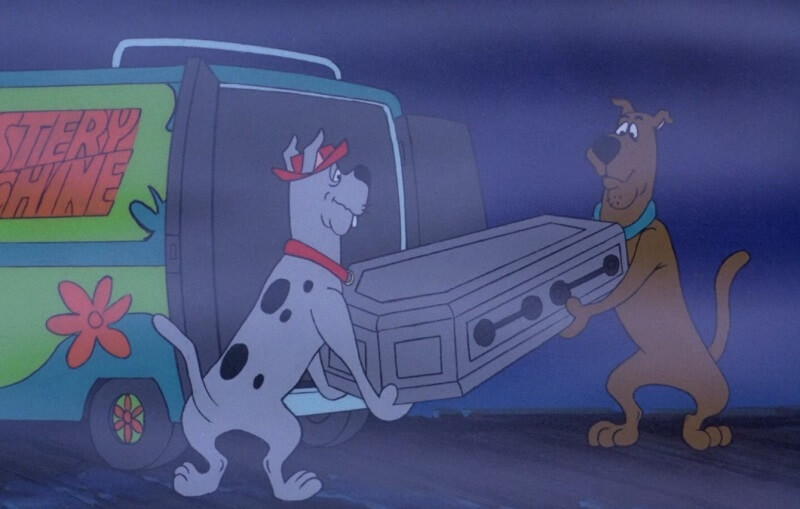 Scooby-Dum gives his best effort to assist the Gang, and accidentally opens the coffin, releasing a bat. 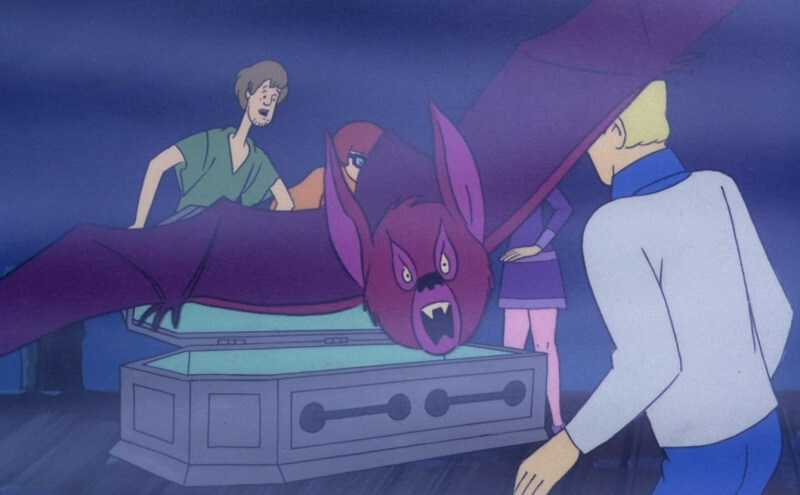 The Gang arrive at the hotel and give the coffin to Mr. Dracul.  Apparently, he needed it for an undertaker’s convention.  And it is one of the many coffins on display in the Ballroom. 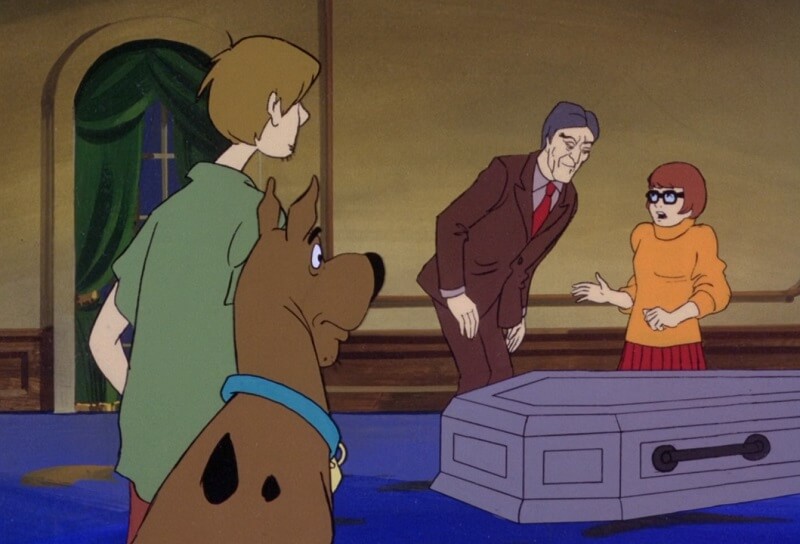 The Gang head up to Lisa’s room and meet her along with her Uncle Leon.  We learn that Uncle Leon is like a father to her, as he has raised her since she was a small child.  Uncle Leon cracks a joke saying that tomorrow, Lisa will become his boss.

Uncle Leon’s wrist watch alarm goes off, and it’s time for him to get back to business.  Meanwhile the guys and girls decide to hit the hay.  Lisa shows Velma and Daphne their room and decides it’s too small for them.  So she switches rooms

As Daphne is combing her hair, and Velma is doing some sit-ups, the girls scare themselves into bed discussing vampires.  After falling asleep, it doesn’t take long for a Vampire to make his appearance! 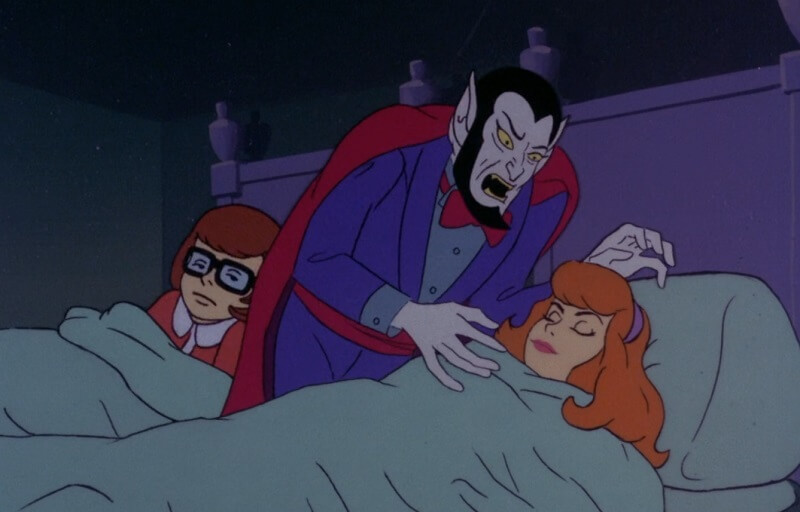 Freddy and the boys hear Velma and Daphne’s screams of terror, and they rush into the from just after the Vampire flees.  Velma explains to Freddy that all the doors and windows were locked, so she is clueless as to how the vampire got in.

The Gang search for clues and discover a ventilation duct large enough for a human to get into.  Daphne runs to Lisa’s room to tell her about the vampire, while Shaggy, Scooby, and Scooby-Dum crawl into the duct to see what lies at the other end.

In Lisa\’s room, Daphne explains what has just gone down.  As Lisa goes to change so, they can investigate, the phone rings, and Daphne hears a bell on the other end and dismisses it as being weird and gets back to the mystery-solving at hand.

At the other end of the ventilation shaft, Shaggy, Scooby and Scooby Dum find themselves in a dusty hotel bedroom.  It doesn’t take them long to run into the Vampire, and a chase ensues.  Eventually escaping, the three of them reunite with Freddy and the girls.

In the dusty hotel bedroom the Gang discover a dog whistle, which turns out to be clue #1.

Alarmed by all the noise, Uncle Leon shows up, and Lisa explains that they all just saw a vampire.  Uncle Leon then reveals to Lisa that her grandfather (who is from one of the oldest families in Europe) was actually a vampire.

Uncle Leon suspects that the Grandfather has returned to turn Lisa into a vampire!

The Gang decide to split up and look for clues to solve this mystery.  Freddy and girls head to the Ballroom to inspect the coffins.  Shaggy, Scooby and Scooby-Dum are given the task of guarding Lisa.

Lisa answers her phone and hears the same bell that Daphne heard earlier. Much to Scooby and Shaggy’s horror, this turns her into a vampire.  She chases Shaggy, Scooby and Scooby-Dum out of the room along with her vampire grandfather.

Shaggy and the dogs run outside, and escape on golf carts.  After a chase through the golf course, they evade the Vampire and head back to the ballroom to reunite with Freddy and the girls. 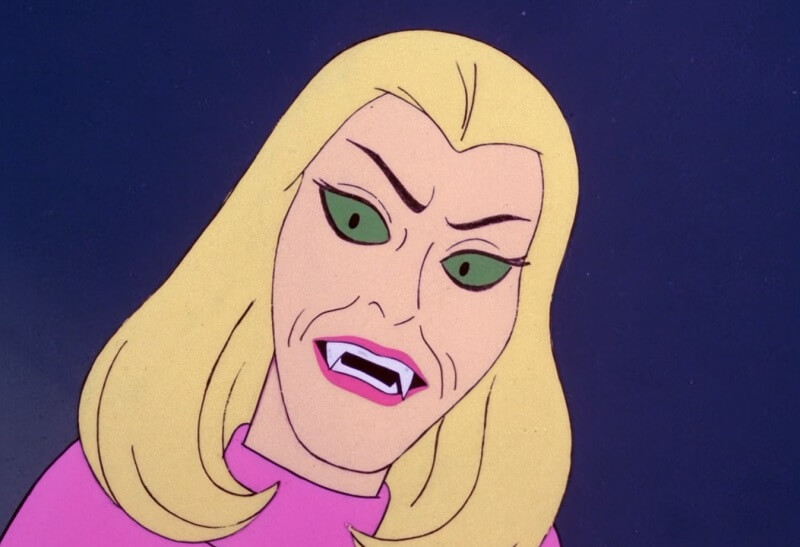 In the ballroom, Scooby-Dum discovers a piece of paper in a coffin labelled “Exo 6 Desmo” 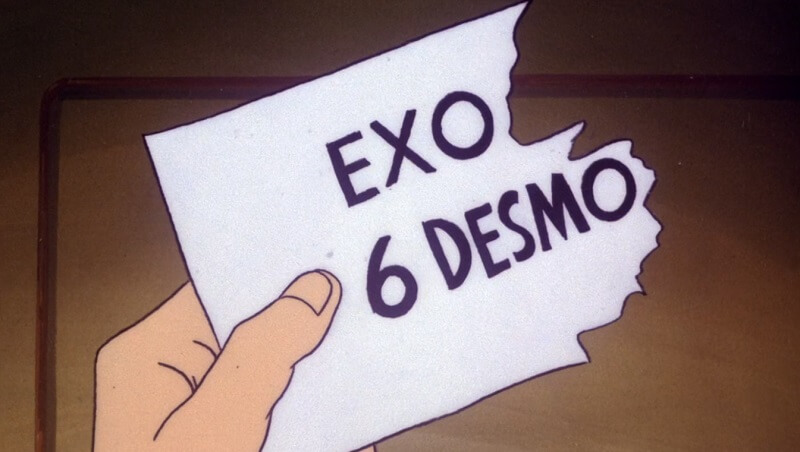 Lisa explains she doesn’t remember a thing after hearing the bells over the phone. Daphne tells the Gang that she also heard a bell at one point, and the wheels start spinning in Freddy and Velma\’s head.

Freddy devises a trap, that doesn’t go according to plan, but they end up catching the Vampire.

The Vampire turns out to be Uncle Leon.  In an act of madness, he wanted Lisa out of the way so he could steal her inheritance of the hotel. 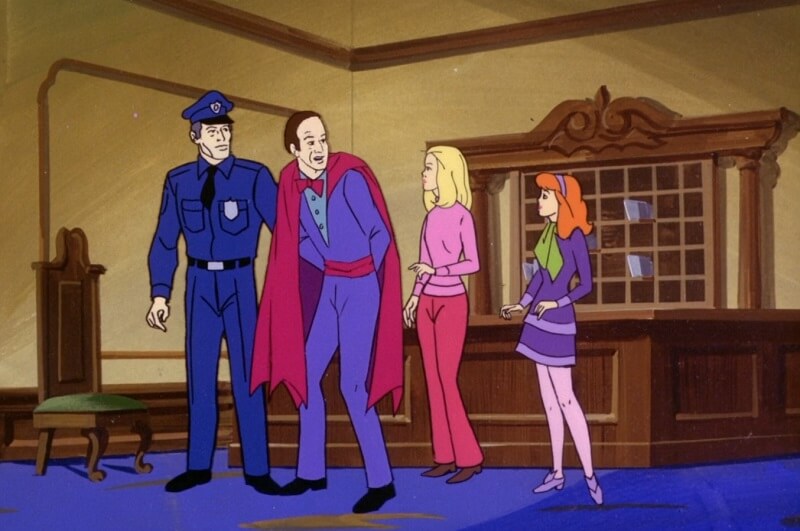 The entire story about Lisa’s grandfather being a vampire was fabricated, and he used his wrist watch alarm bell to hypnotize her.  His plan was to make her think that she was a vampire, so she would be institutionalized in a mental hospital.  This way the hotel would all be his.

The dog whistle was so he could call bats at his whim. And the torn piece of paper meant:

Which is evidence that he bought and planted the Vampire Bats in the hotel.  With another mystery solved, the Police escort Uncle Leon to the slammer.

This episode is amazing!  I found the Vampire to have tons of personality, and the plot to be so wacky.  With the episode taking place in a hotel, on an island shaped like a skull, with an undertaker convention going on, it’s very epic, and pulled off with grace and style.

This may be one of the darkest ploys a Villain has had in a Scooby-Doo episode.  A loving uncle who tries to get his niece committed so he can own a failing hotel on an island that very few people visit.

While I’m not the biggest Scooby-Dum fan, I don’t think he detracted from this episode, and he fit right in.  If I had one issue, it’s maybe that the Vampire made a Panther noise.  I felt that was kinda weird.  But, meh, it’s not like I know what a Vampire sounds like.

There is a highly sought after VHS release of this episode called Scooby-Doo\’s Spookiest Tales.  This features an alternate take that isn’t exactly ready for prime time.  Here are a list of the major differences.

The Creepy Heap from the Deep