In this episode we see the gang attending a hang gliding competition that Freddy was invited to participate in. Here they discover a Pterodactyl ghost that haunts the canyon caves.

Not much trivia for this one, other than we see the Pterodactyl Ghost show up in Scooby-Doo 2, Monsters Unleashed. Also, this entire run of season 2 of the Scooby-Doo show has yet to be released as a complete series on DVD or Blu-ray. Such a tragedy as these are some of the best episodes ever made.

Anyway, enough of my jibber jabber, lets get on with my review.

Hang In There, Scooby-Doo – Episode Review

The episode begins with the gang driving up Big Canyon towards a hang gliding tournament. Only the most experienced flyers are allowed to compete, and Freddy is one of those skilled athletes who was invited.

Unbeknownst to the gang, unfortunately, a half man, half pterodactyl watches from above. 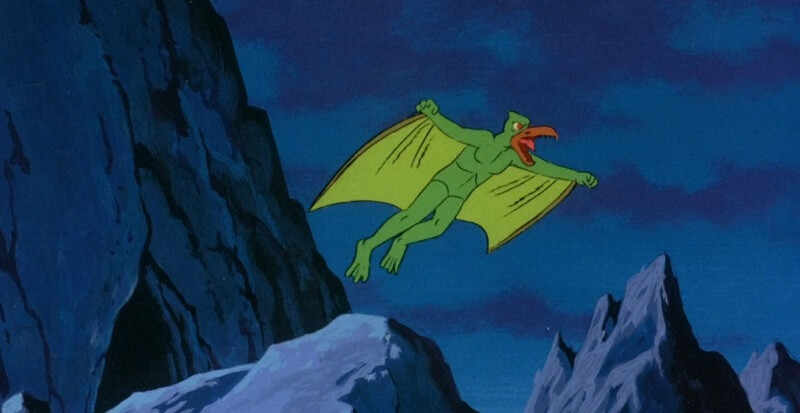 The gang are spending the night at Big Canyon Dude Ranch. It’s incredibly quiet, until they hear the shout of the Pterodactyl Ghost who swoops towards them. The gang take shelter in a covered wagon and watch in fear until the ghost flies away.

Inside the dude ranch, the gang meet the manager, Mr. Bohannon. Mr. Bohannon explains that millions of years ago the canyon was filled with dinosaurs. Some people believe that the Pterodactyls evolved into man like creatures which they saw the ghost of in such an example.

The gang also meet Mr. Morbley, the muscular Dude Ranch Handyman and bellhop. Mr. Morbley carries their luggage to their rooms where Mr. Bohannon nervously wishes them a good night.

During the day, the gang line up near the canyon edge where Freddy is preparing to glide. Scooby accidentally takes flight after chasing a sandwich and glides through the canyons and into a cave. The rest of the gang wander off to find him.

Inside the cave, the gang searches for Scooby. Inside they find cave carvings of the Pterodactyl humanoids, along with a fresh carving of Scooby being confronted by the ghost creatures with a clue that he’s behind a wall. 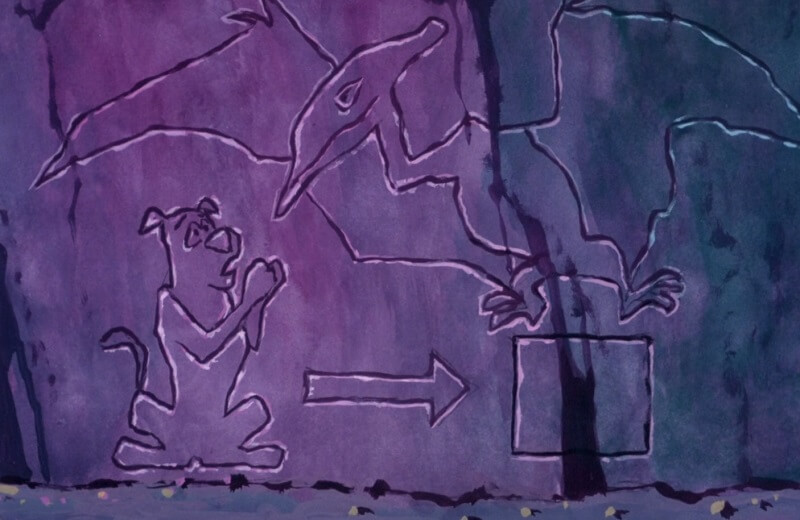 The gang swiftly find Scooby and Velma comments on how eager the monster is on scaring them away. Going deeper into the cave, the gang find Pterodactyl tracks and follow them to a stone age living room.

They find multiple tracks and assume there are several creatures, so they split up to follow the various tracks.

Freddy and the girls discover a secret passage while Shaggy and Scooby immediately run into one of the Pterodactyl monsters.

Freddy and the girls soon hear music playing and find a tape cassette on the ground. They also discover Scooby and Shaggy being chased by the creature. We also get a weird scene of a skeleton man running off. I found this scene a bit bizarre and out of place and it certainly raises a lot of questions on if Shaggy was hallucinating or this skeleton man was something real.
The gang escape the cave system, and drive off in the Mystery Machine where they pop the cassette into the tape deck. Hear they hear the modern rock beats of Elvis John (a take on Elton John). 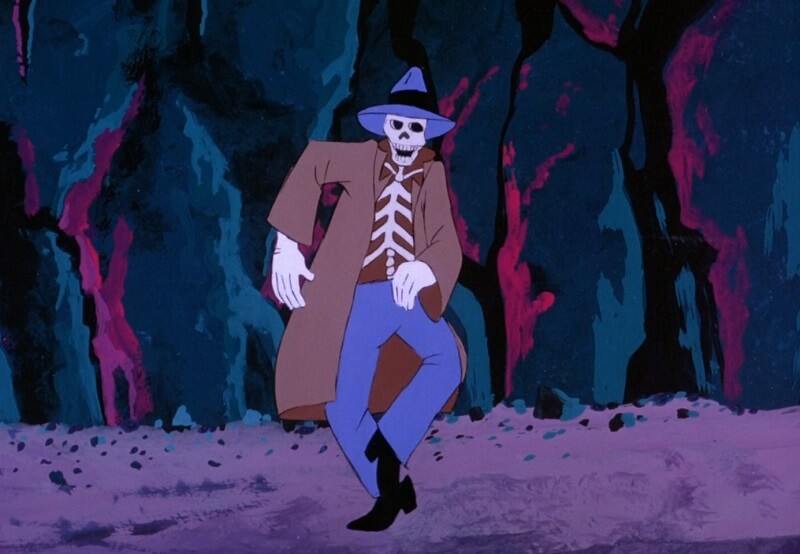 Back at the dude ranch, Mr. Bohannon explains that the cave drawings were ancient history and the cassette was probably dropped by an exploring hiker. The gang then hear the same weird music they heard in the cave so they follow it.

The music leads them to the basement where the music stops. Hiding, they see Mr. Morbley walk out of a room so they follow him and discover a weird glow. It turns out Mr. Morbley was burning something, and when they look further it turns out to be papers. Velma salvages a scrap but there is not enough light to read it at the time.

Freddy decides that they should all head back to the cave to look for more clues. There are dozens of caves but Freddy heads for the largest one at the top of the canyon.

During their adventures, we get lots of chase scenes and Daphne discovers a secret switch and fake wall that was disguised as a cave in. Behind the wall, they find a recording studio setup. 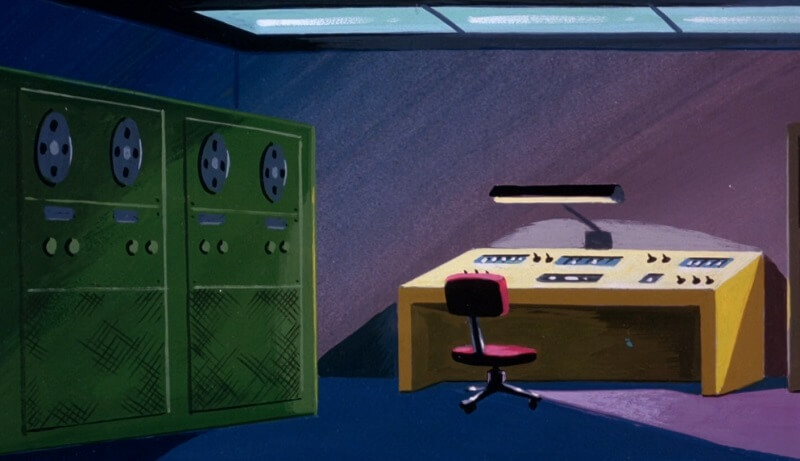 Freddy takes the Mystery Machine down to a lower cave system and decides to set a trap by building a road block. The trap almost works and they almost trap a Pterodactyl driving Johnny’s Sandwich truck. The truck hits a bump attempting to escape and dozens of cassettes and records fall out. 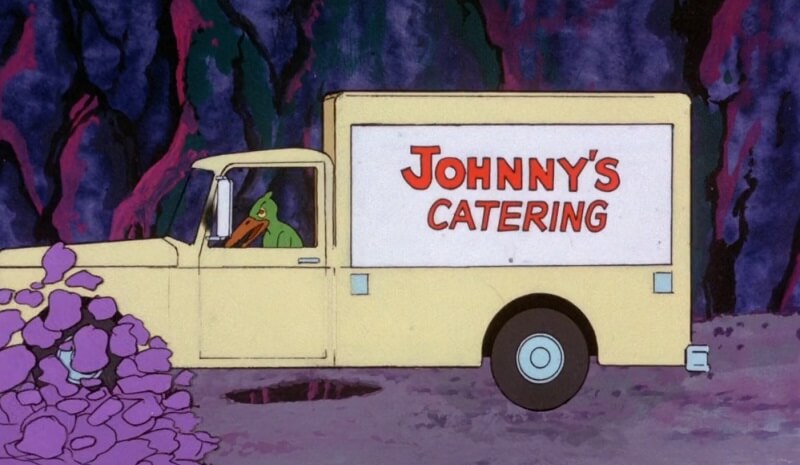 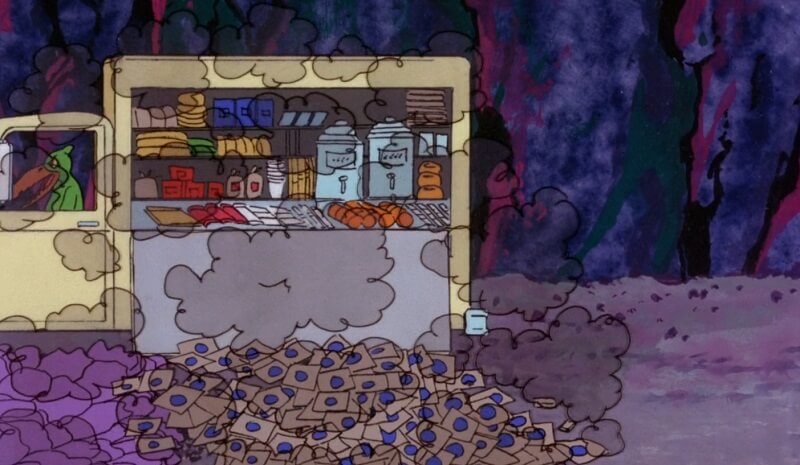 Outside they watch the Pterodactyl escape on a rubber raft down the rapids. Thinking quickly Freddy loads the hang-glider up with Shaggy and Scooby where they take chase. 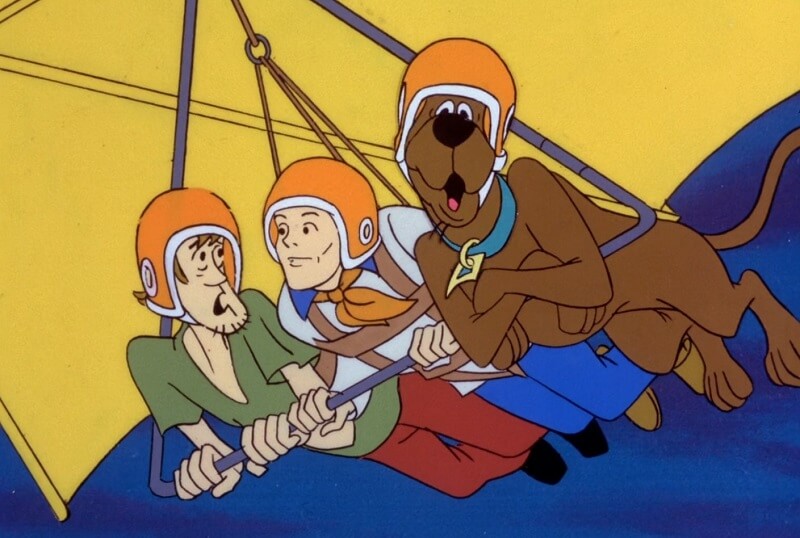 Catching the Pterodactyl, the local sheriff shows up and is unmasked. It turns out to be Johnny, the owner of the catering truck. He was part of a pirating ring where he was making bootleg copies of popular music on cassettes and records. 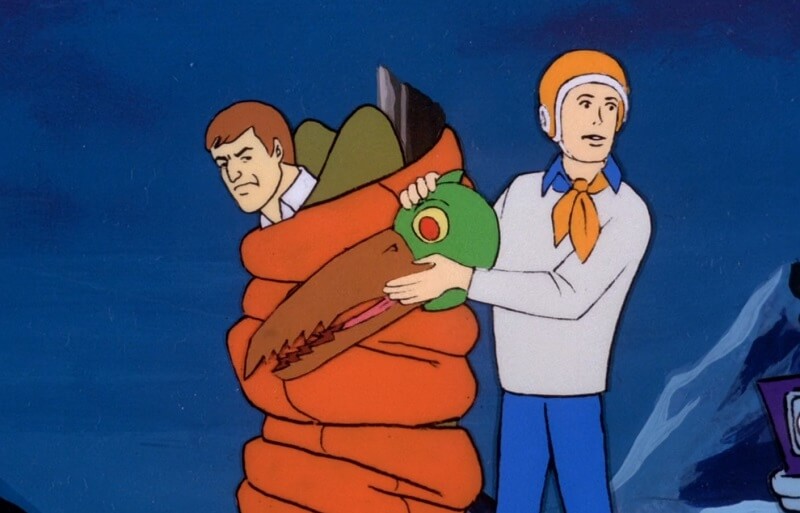 Mr. Bohannon shows up and is also placed under arrest. The gang explain he was the ringleader of the pirating operation where the engineers would bootleg the music in the cave system, then fly the music down by hang-glider to the warehouses at night. They then drove the bootlegs to the store with the catering trucks.

The plan worked fine until locals got curious about the hang gliders at night, so Mr. Bohannon dreamed up the Pterodactyl ghost to scare everyone off. Velma proves there theory with a partially burnt invoice with a request for 3,000 albums and 3,000 cassettes with a payment of $12,000. 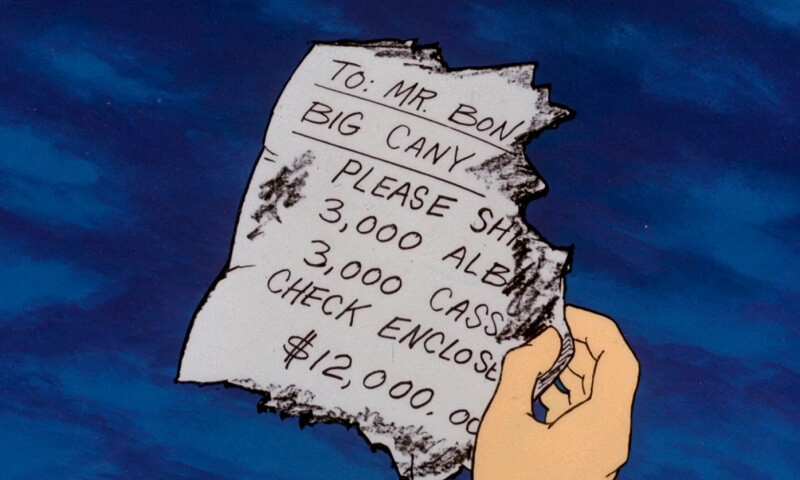 I enjoyed this one a lot but I don’t think it’s as awesome as other Scooby-Doo Show episodes. One reason is that the mystery is a bit difficult to follow as we are never introduced to Johnny other than Scooby and Shaggy making a sandwich at his truck at the beginning.

The plot seems a bit muddled as well, with lots of mini-chase scenes that last for a quick minute and interrupt the pacing of the episode.

I did enjoy the Pterodactyl creature, but the episode also raises more questions than it answers, such as who drew the cave image of Scooby and the Pterodactyl on the wall. And who was the skeleton man?

Also, why would the bootleggers need a hidden inside cave system which would require hundreds of thousands of dollars to build in a remote cave as it would require electrical lines and engineers to run and operate (Especially with all those secret passages).

Still, I loved the spooky atmosphere, and the uniqueness of the monster in this one.

Well that wraps up another mystery, join me next week when I will be covering the Ozark Witch Switch. Until then, Stay Spooky!