The Creepy Heap from the Deep is the 8th and final episode of the second Season of the Scooby-Doo Show and originally aired on October 29, 1977.

This episode sees the gang encountering a strange monster from the ocean while at a beach party. Shortly after, they meet an old sea captain who explains the monster can steal your spirit.

Not much trivia for this episode other than that we’re still waiting on a proper Season 2 release of this episode on DVD. Thus, you rarely hear anyone ever talking about this one.

The Creepy Heap from the Deep – Episode Review

The episode begins with a strange one eyed monster emerging from the depths of the ocean. We then pan to a nearby beach weather the gang are cooking hot dogs on the beach on a foggy night. Despite getting lost and ending up on the wrong beach Velma tries to make the best of it by wearing a festive chef hat. 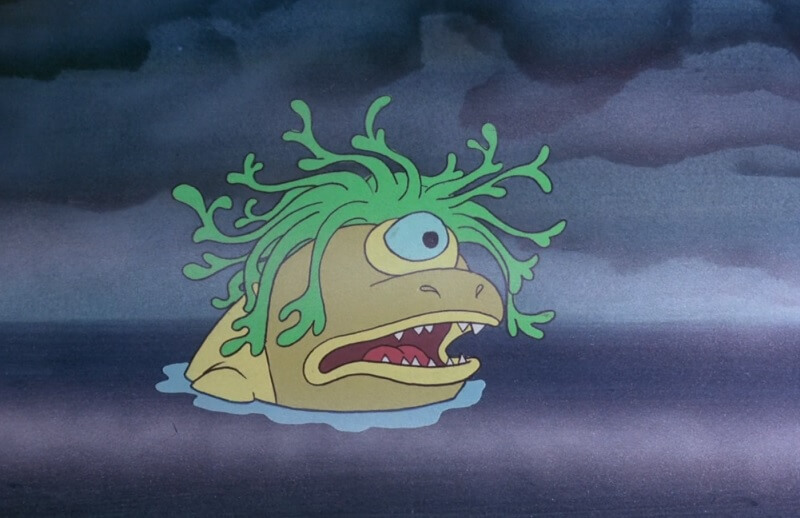 Out in a dinghy, Shaggy and Scooby are out catching fish when Scooby reels in a big one. The fish, unfortunately turns out to be the Creepy Heap who snaps at him with his crab like pincers.

The sea monster chases after the entire gang who manage to escape by running up a steep cliff to a weird old house. Knocking on the door they meet Captain Clements who lets the gang call the police on his phone. Unfortunately the storm has downed the phone lines. 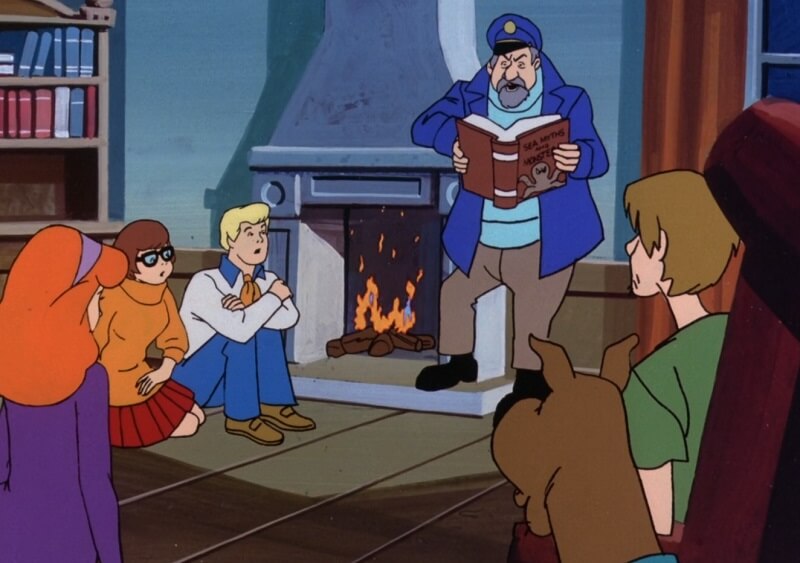 Captain Clements explains that 100 years ago an evil sailor had a curse put on him by his shipmates before being thrown overboard. And now he’s come back as this supernatural creature.

The Captain further explains that it needs human spirits to stay alive. Freddy and the gang leave with Freddy determined to contact the sheriff. As the Captain closes the door we see him surprised by something off camera. 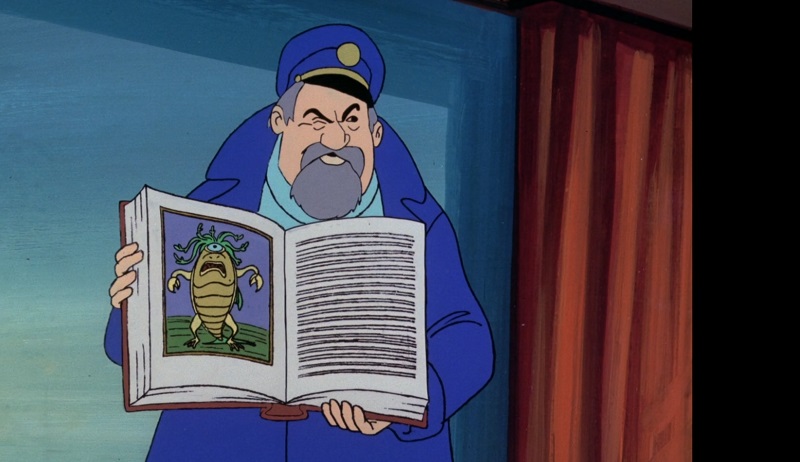 Back at the Mystery Machine, the van is covered in seaweed. Nearby there are some footprints that lead back to the Captain’s house. Wanting to warn the Captain, the gang rush back to his house where the front door is smashed in.

On a comfy spirit sits the husk of Captain Clements. In the dust of a nearby end table he has scrawled out the words ‘Creature Spirit’. 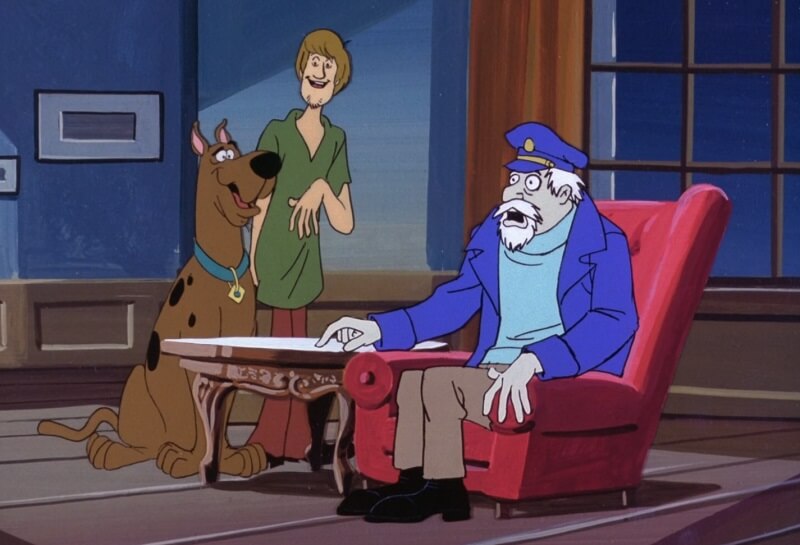 Freddy vows to capture the Sea Monster so they can get Captain Cerement’s spirit back. Meanwhile Shaggy and Scooby stay back to guard the Captain.

The Captain wakes up in a trance and declares that he is controlled by the Creature and is after Scooby and Shaggy’s soul. Thus, we soon get a quick chase scene where our two pals do their best to evade the possessed Captain.

Finding their way into an elevator, Scooby and Shaggy descend down to the cliff’s beach where they now have run into the Creepy Heap where another chase occurs. Freddy and the girls rush in and they see the Sea Monster rush out to sea towards a blinking light. Up at the Captains house they also notice a blinking light.

Using a dinghy the gang follow the Creepy Heap out to see where they end up in a fog bank. Using their scuba gear, Shaggy and Scooby swim downward into the ocean to explore even further. 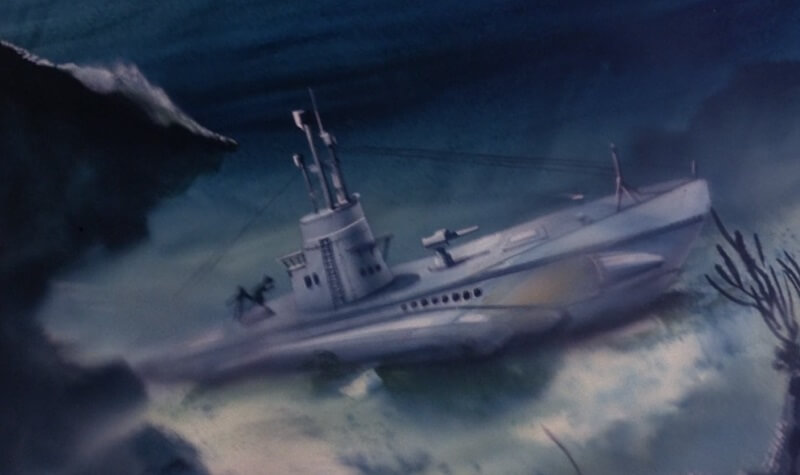 From their Dinghy above, Freddy sees Scooby and Shaggy being chased, so he and the girls also don their Scuba gear and follow Scooby, Shaggy and the Monster into an old submarine.

The old Submarine is pressurized so everyone can wander about without their oxygen tanks. Once again, they split up where Scooby and Shaggy run into the monster. While trying to escape, Shaggy opens up an outside door and water begins flooding the submarine. 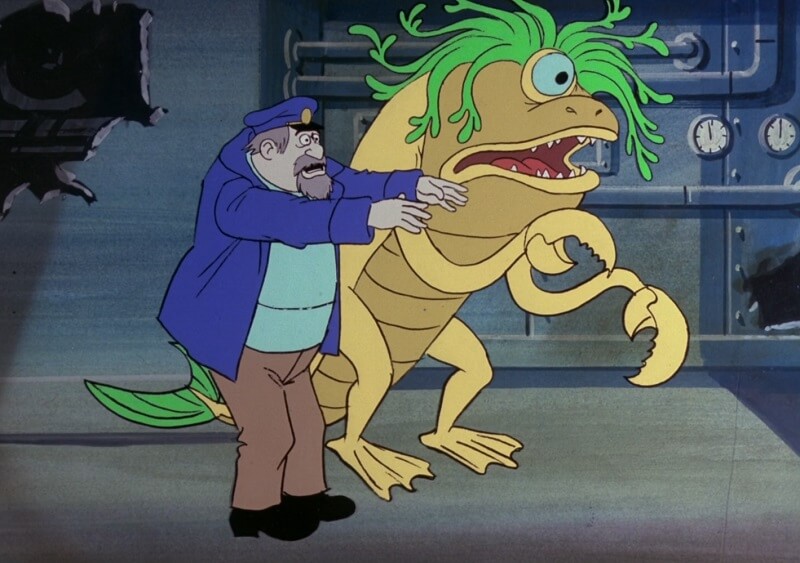 The rush of water sends Scooby and Shaggy back to Freddy and the girls where they end up in a locked room where the water level begins to rise. Fortunately they have their scuba gear and are able to open up the airlock to make their way outside and back to the beach.

Velma, Shaggy and Scooby head off to look for clues and find an old Shack. It’s full of junk and a friendly hermit. The hermit has a pet shark named Walter which sends the trio off and running.

Freddy and Daphne follow more tracks and find a rubber key on the path of tracks. The Sea Monster shows up and everyone once again reunites.

Relaxing by the Mystery Machine they spot the blinking light and they once more hop in dinghy and paddle out to sea. They soon arrive at a freighter where they get onboard and see a crane loading the Sea Monster aboard. 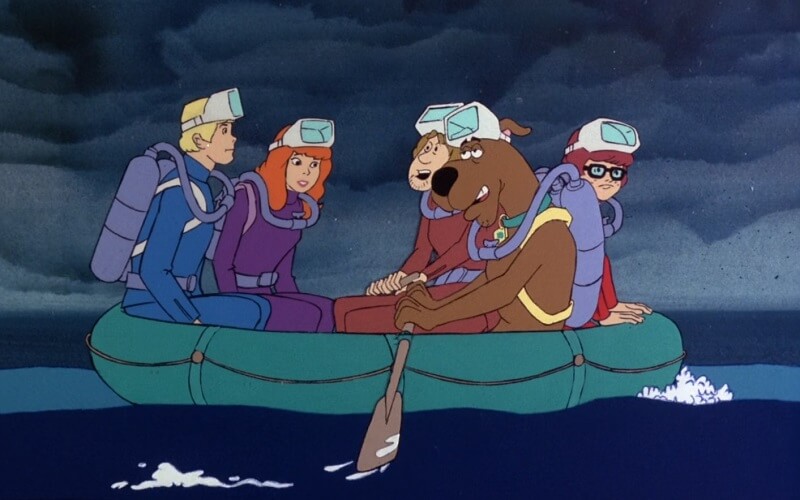 In the chart room they see that the submarine is directly below the ship so they once more jump in the water and swim down to the submarine.

Inside the ship they find jars of hair dye and peroxide, along with a wanted sign of a burglar, and a recent polaroid of him with blonde hair instead of black. 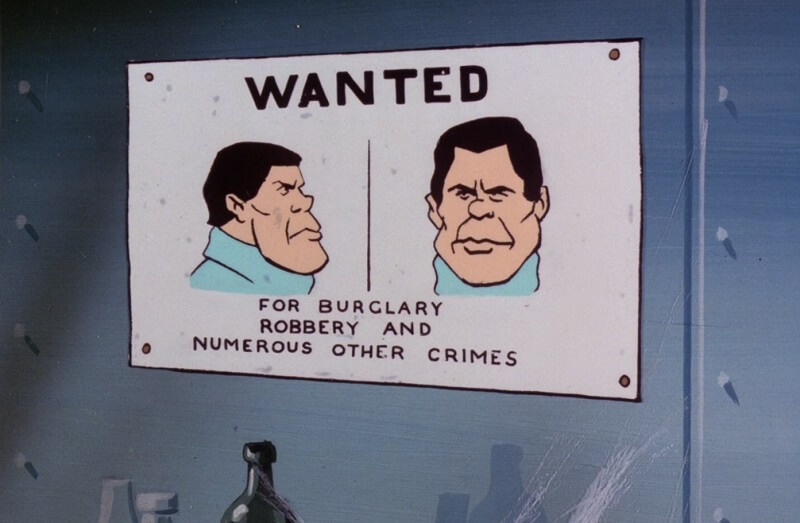 The sea monster and the possessed Captain then show up and chase the gang into the torpedo room where Scooby sets off a torpedo by accident. The torpedo gives Freddy an idea, so he sets a trap and they soon capture the Sea Monster and the spiritless Captain Clements who are launched back to the beach by the torpedo gear. 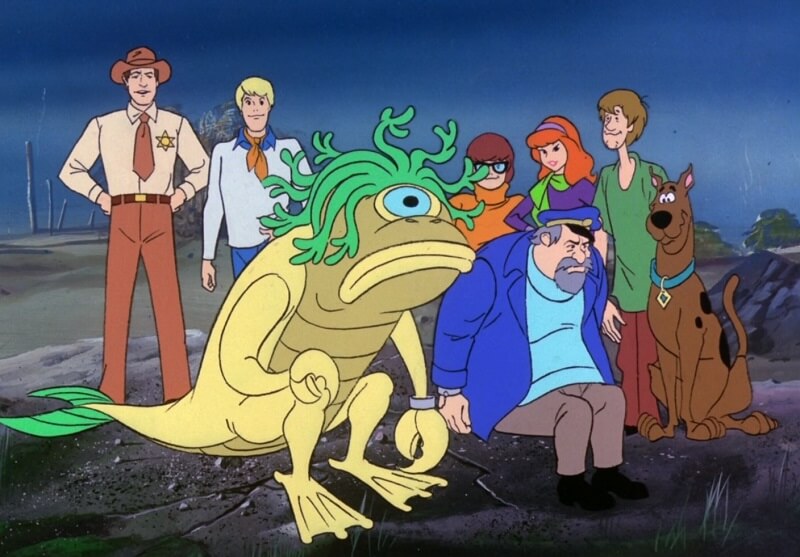 The sheriff soon arrives at the beach and the gang explain that the Captain used the sunken ship as a laboratory to change criminals’ appearance. By dressing the prisoners up first in his cabin, he could scare off any curious onlookers. The suit had an air tank and jet motor built in allowing him to swim from the cabin to the submarine. 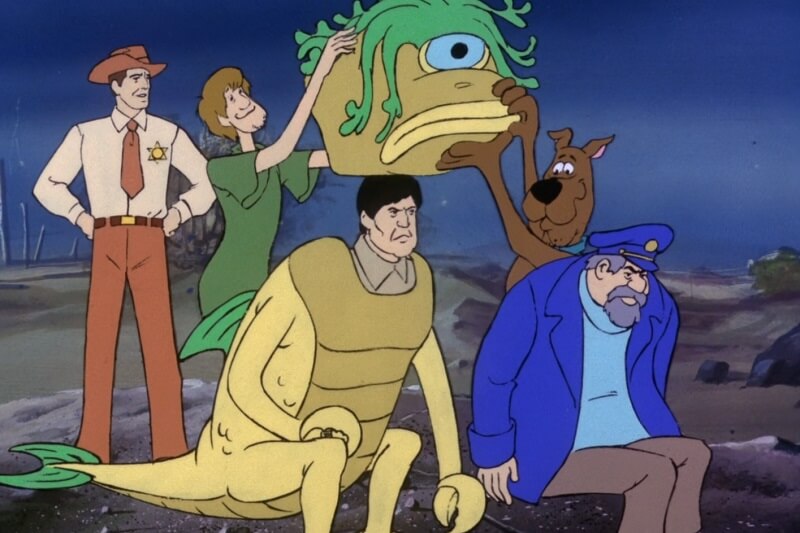 After the Captain dyed his hair, a crane pulled him aboard a freighter where they could then sneak the criminal out of the country.

Unmasking the Creepy Heap it does turn out to be a recent prisoner who escaped.

With another Mystery Solved, the gang head off on their next adventure. 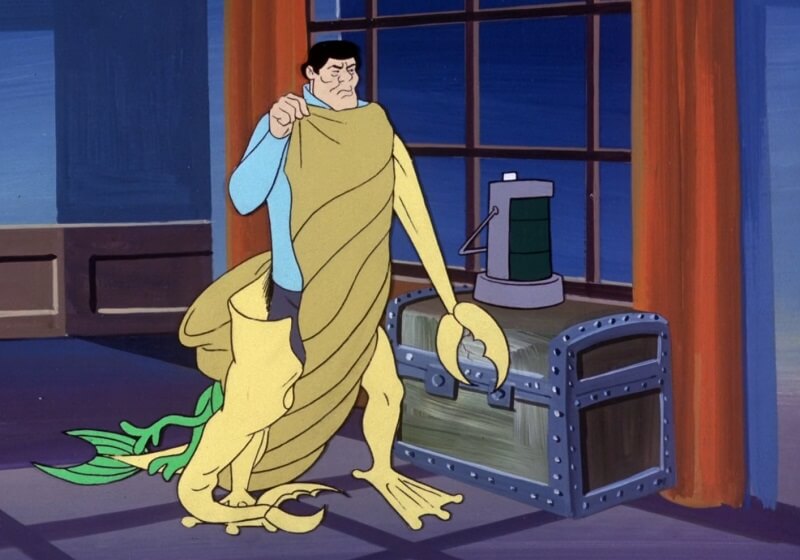 While I enjoyed this episode, I didn’t love it.

I did feel it had a strong opening which harkened back to A Clue for Scooby Doo and Scooby’s Night with a Frozen Fright where the gang discover something sinister at a beach party.

The Captain’s house on top of a cliff was also fantastic and spooky, and I loved how it had a creepy old elevator built in. The possessed Captain was also chilling.

The submarine ship, beach and freighter also made for good set pieces, but often there was a lot of wasted opportunity as they were used for quick chase scenes. In a typical Scooby-Doo episode we might get 3 chase scenes, but I feel like this episode had at least 9, which brings down the rating for me.

And let’s talk about the creature design… I’m not a fan. While creative, I don’t find it scary at all. It just seemed rather silly to me and the possessed Sea Captain seemed like a bigger threat.

The wrap up plot as well is way too complicated. I don’t understand why the Sea Captain would go to all that trouble to use an abandoned submarine lab as a makeup studio when he has a cabin on a cliff that is probably full of caves that he could have used. Or even better, just dye the prisoner’s hair in your bathroom.

I still enjoyed this episode and highly recommend you giving it a watch if you haven’t. The opening is super spooky and overall, this is a fun episode.