The Curse of Viking Lake originally aired on September 10, 1977 and is the first episode of Season Two of the Scooby-Doo Show.

The episode sees the gang up in Newfoundland, Canada, on a Fishing Trip with Velma’s Uncle John. Well, we suspect it’s Newfoundland, as that’s where Vikings have known to land in North America centuries ago. During the trip, Uncle John goes missing, and the gang are haunted by ghost Vikings and their ship.

The episode opens up on a lone cabin set near Viking lake. A man, (who is Velma’s Uncle John), sits at his desk writing in a journal when he hears a loud horn blow outside. Looking outside, he sees a Viking Longship row by. Distracted, the man does not see a Viking sneak up behind him.

The Viking threatens Uncle John with the fact that he needs to pay the price for disrupting the Sacred Viking Burial Ground.

We then cut to the gang in the Mystery Machine.  They are all decked out in winter clothing as Newfoundland is notoriously frigid.  Daphne is certain the lake will be frozen over. 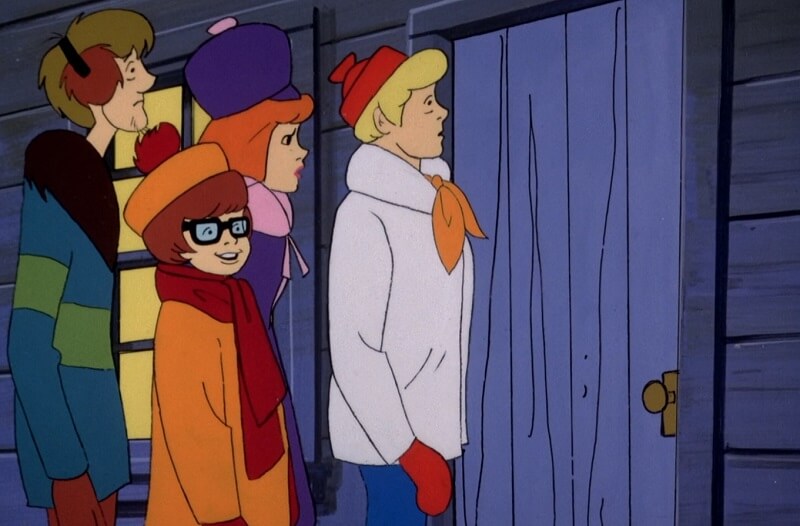 When the gang arrives at Uncle John’s cabin, they find a warm fireplace, a pot of coffee brewing, but no Uncle John.  Daphne thinks that maybe he went out to catch some trout for breakfast.  That is until they find Uncle John’s logbook, where he writes that ghostly Vikings have been haunting the lake.

In the logbook, he also writes that he has solved the mystery, but his handwriting trails off before he can fully explain. 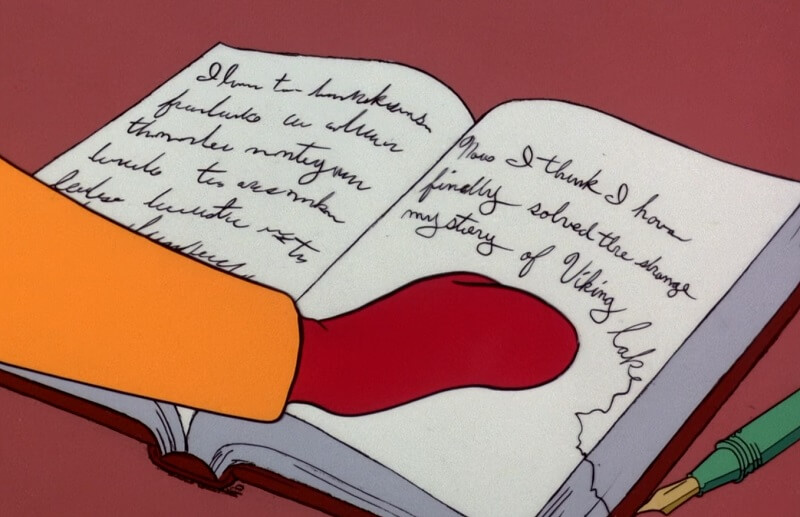 Also, in the book, they find drawings of Viking Runes, and Fred believes that this might be a clue.

While the gang are discussing the mystery at hand, Scooby spots a Viking outside the window.  Dashing outside, they find large footprints disappearing into the woods.  Daphne, Velma and Freddy go and follow the footprints while Shaggy and Scooby investigate the lake. 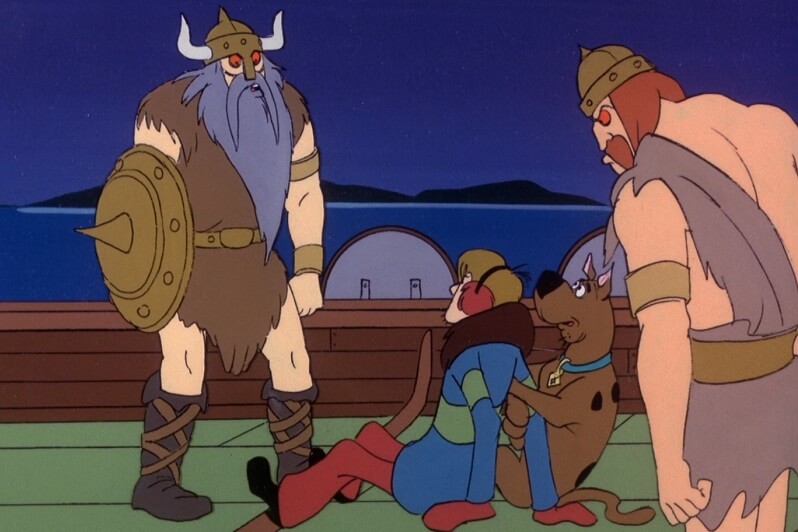 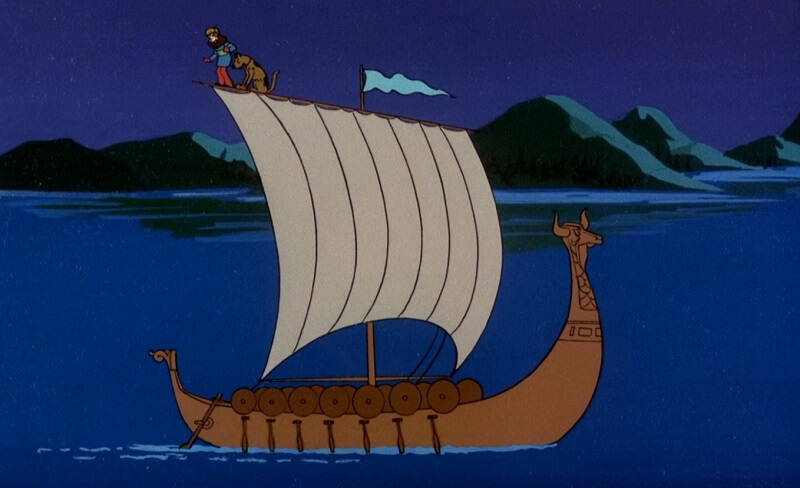 Reuniting, the gang head into town where they tell Sheriff Swinson about their missing Uncle John and the Viking Ghosts.  The Sheriff also tells them that two young geologists have also gone missing.

Freddy shows the Sheriff Uncle John\’s journal as well as the Runes within.  Instead of, oh, I don’t know, collecting the journal as evidence and investigating for the missing Uncle John, the Sheriff passes them on to Mr. Hanson, the local Viking expert and museum curator. 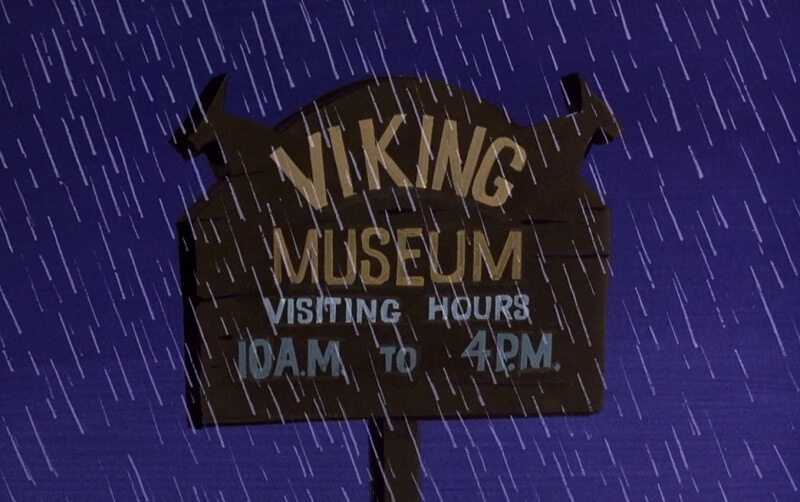 Even though the Museum is closed, Mr. Hanson is available to translate the runes.  He tells the gang that the runes speak of an evil curse that was unleashed when the Viking burial ground was disturbed.

Feeling as if Uncle John had found the burial ground, the gang return to the lake to see if they can discover it.  Splitting up, Fred, Daphne and Velma discover a cave with a huge painting of a Viking in it.  The cave is also incredibly hot from bursts of steam that shoot out of random holes.

They are soon spotted by a Viking and Freddy, Daphne and Velma seek shelter in a cave room that has a wooden door.  Slamming the door shut and barricading it, they find themselves in an alter room, with a giant statue of Odin and a Viking praying to him.  The Viking ghost works some hocus pocus and traps the gang in a new hidden room. 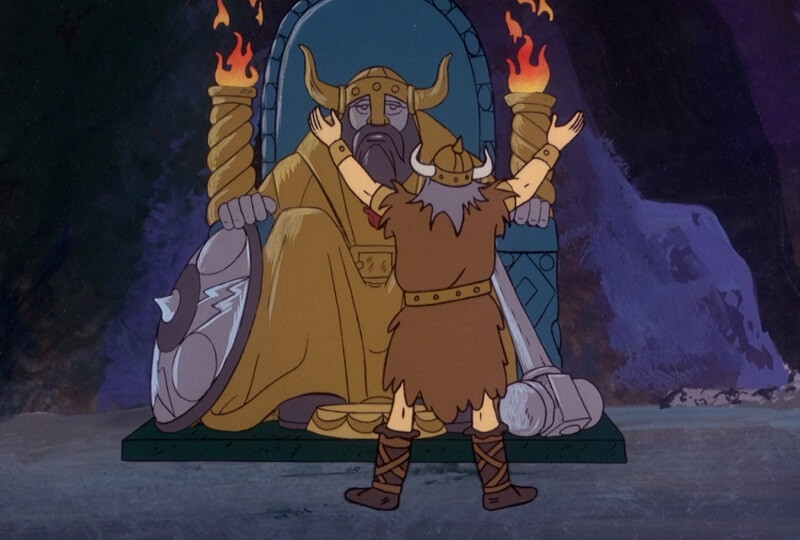 Fortunately, they are accidentally rescued by Scooby and Shaggy, who open the secret entrance after Scooby is blown on to the statue head by some steam.

Daphne discovers a secret elevator, and the gang take it down where they spot the Vikings loading machinery off of the Viking longship and on to a rail cart.  The gang also discovers steam turbines that are being used to generate power. 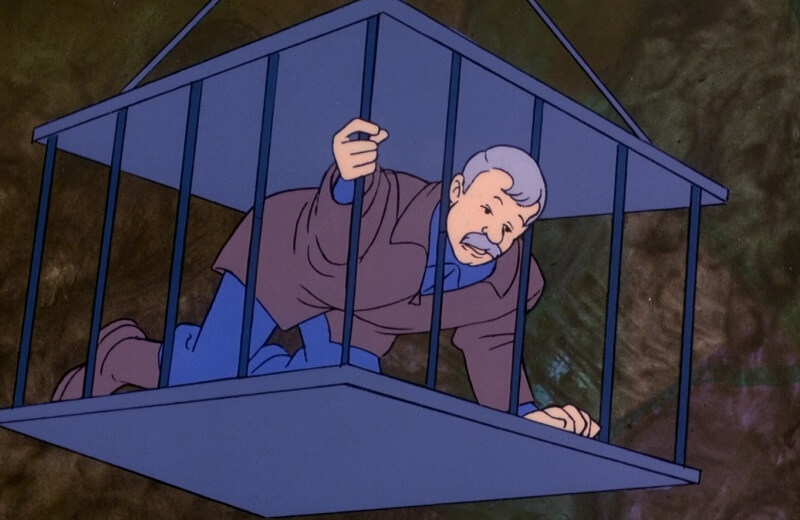 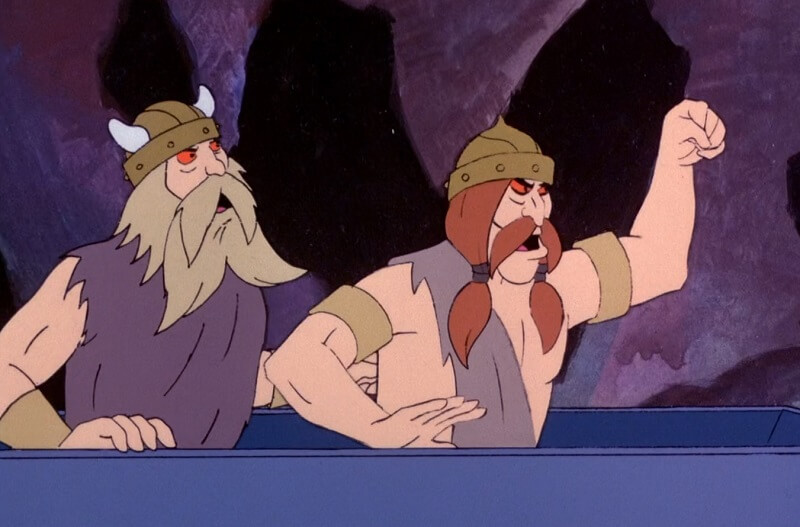 Fortunately Uncle John is down there, hanging from a cage that is attached to the ceiling.  With some quick thinking, Scooby rescues Uncle John, but of course, they are spotted by the Vikings.  After a quick chase, Uncle John sneaks off to get the Sheriff, and the gang traps the vikings.

It’s revealed that the Vikings are Mr. Hanson and the two missing geologists.  The geologists had discovered Uranium on the lake shore and devised a scheme to mine it and make millions.  Kids, do not try this at home, Uranium is incredibly radioactive, and exposure to it will cause a whole host of problems.

I give this episode a 7 out of 10.  While I like the idea of Ghost Vikings, and they have a bit of personality in this episode, they are a bit boring.  Only one of the Vikings seems to talk, while the other two chase the gang around.

On the other hand, the lead Viking does look cool and imposing.  The caves and tunnels filled with bursts of steam was also neat, and there is some good comedy in this episode.

In fact the first third of this episode is pure Scooby gold.  The creepy set up with Uncle John vanishing during a lightening storm is amazing, and the Viking museum curator explaining the curse sets a doomy mood. It’s unfortunate from here on out it just turns into repetitive chase scenes.

Maybe I was expecting more as this takes place in my home country of Canada, but I just felt they didn’t do as much with the Viking mythology as they could.  While I only give it a 7 out of 10, there are still lots of cools scenes and I will revisit this one again for sure!