Creepy Cruise is the 7th episode of the second season of The Scooby-Doo Show however it originally aired on October 22, 1977.  Unfortunately, you can not buy this on DVD just yet.  However, you can watch it on Boomerang if you have a subscription.

Spoilers Ahoy, let’s take a ride on this Creepy Cruise!

The episode opens up with an exterior shot of a large boat docked at a harbour at night.  On board, Professor Von Klamp informs the press about his time machine invention.  Instead of accolades, our dear Professor receives laughter.  Professor Von Klamp vows that they will soon learn that he is the greatest inventor in the world. 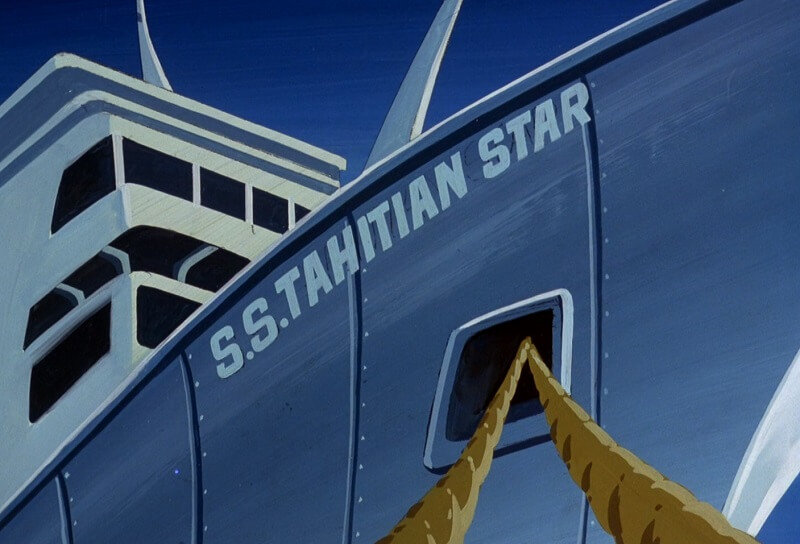 When the few remaining reporters who remain (as many left due to the Professor’s absurd concept) ask about the Monster, the Professor claims it was nothing at all.  The Professor then hastily asks the construction workers to hurry up and get his time machine on board.

The Scooby Gang Take a Holiday

Meanwhile the Gang are headed off to the South Seas on a three-week cruise with all expenses paid.  It’s all thanks to Shaggy and Scooby winning a contest.  Shaggy’s pumped as this means no ghosts or mysteries for three whole weeks.  Poor Shaggy, when will he learn that trouble seems to follow the Gang no matter where they go.

Looking for their cabins, the Gang mistakenly end up 20 decks below sea-level in the boat’s hull.  Down there they spot some flashing lights and investigate.  Opening the door, they see the time machine.

They also find Professor Von Klamp who tells them not to be afraid.  The Professor claims he was running a test on his latest invention, the Time Machine.  With this machine, he claims, he can travel into the past or the future.  Scooby investigates a little closer and is terrified by a monster that suddenly appears in the machine. 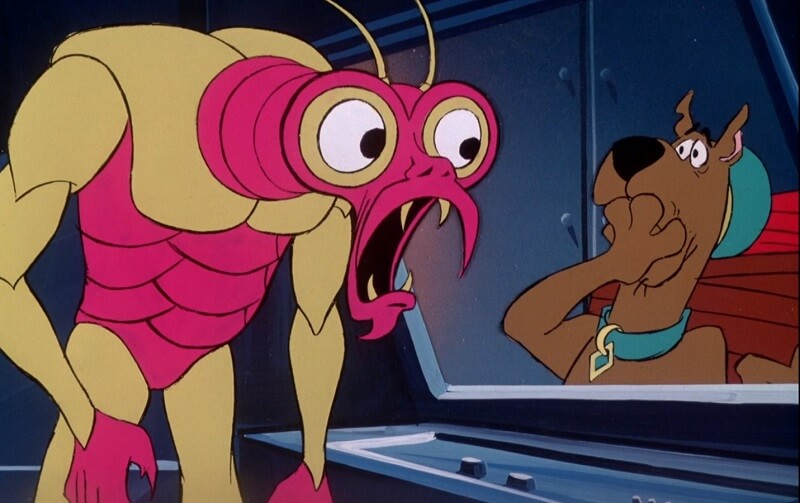 The Gang, however, never do see the Monster and think Scooby is having one of his scaredy-cat moments.  The Professor states that he’s demonstrating the time machine to a group of wealthy investors on the ship, and invites the Gang to attend.  While he’s explaining how he could receive half a million dollars for his invention, a creepy man can be seen spying on the group.

Shaggy’s impressed by the half-million dollar evaluation, as that would buy a million hamburgers.  At the demonstration, which takes place at 10 pm, the Professor explains to the wealthy investors that has to pay his current investor a half-million dollars, or the time machine becomes his. 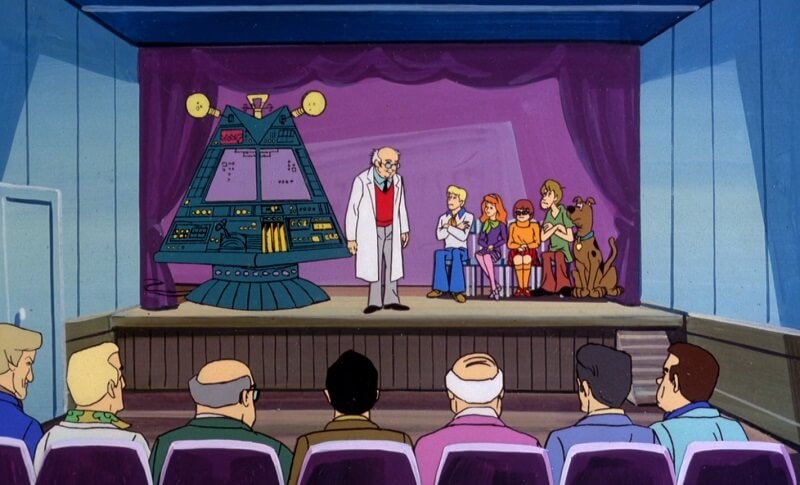 The creepy man we saw before stands up and identifies himself as Simon Grady, the Professor’s current backer.  He states that he hopes the time machine will work by midnight as he wants to be re-payed.  Simon Grady leaves the room and Daphne is grateful as she finds his personality to be that of a creep.

For his first demonstration, the Professor attempts to return an object from the past.  There is a malfunction, and the time machine sets itself to 5,000 years into the future. 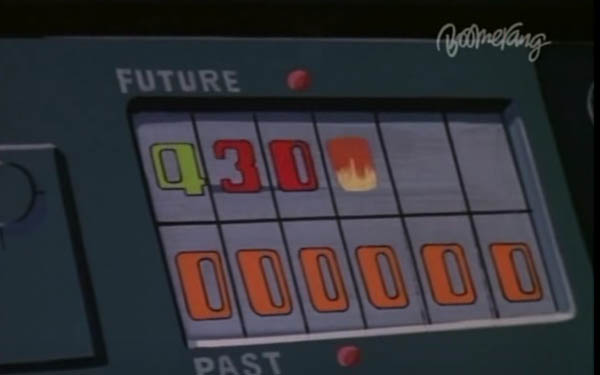 Everyone is alarmed at this news, even Freddy.  The machine erupts with smoke and fire, and the Monster appears — this time outside of the Time Machine. 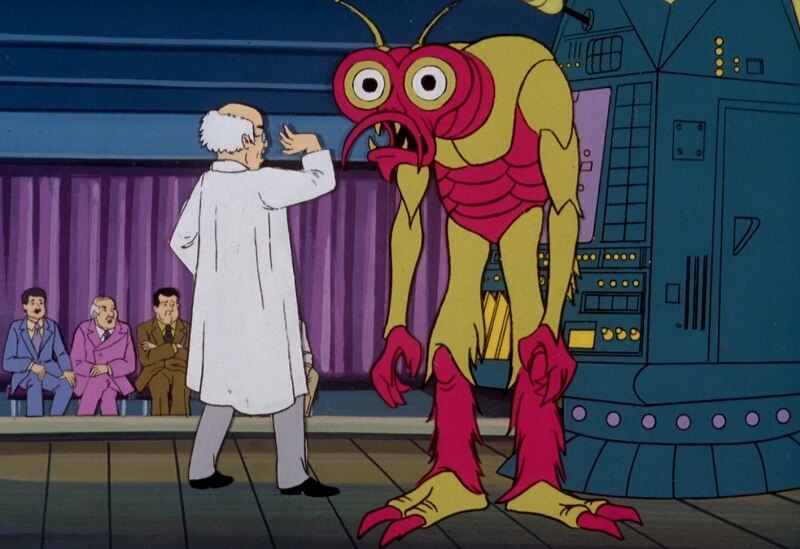 Naturally, the Gang split up to find the Professor.  Not only may the Professor’s life be at stake, but Freddy also explains the Professor is the only chance they have to get rid of that Monster from the future.  Shaggy and Scooby head off in the direction the Monster went, and Freddy, Daphne and Velma go the other way.

It doesn’t take long for Scooby to find the Monster, and a chase follows.  Scooby and Shaggy attempt to hide from the Monster by dressing up as a Sheep and Little Bo Peep at a costume themed dance.  The plan doesn’t work as the Monster ends up terrifying everyone at the costume ball. 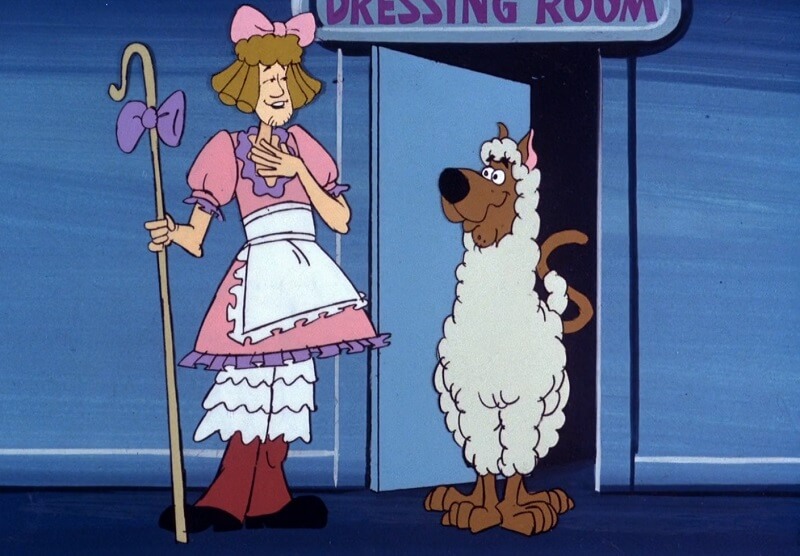 Fred, Daphne and Velma enter the communications room where they find several closed-circuit screens.  Fred has the idea to monitor the screens to see if they can pinpoint where the Professor is.  Unfortunately, the screens aren’t working, and Daphne chalks this up to being a clue.

After finding a locked room on the ship, Daphne decides to break in by getting a boost through a vent.  Following a brief struggle with some life preservers, Daphne manages to unlock the door on her side.  Inside they find a high-powered laser and some strange metal discs. 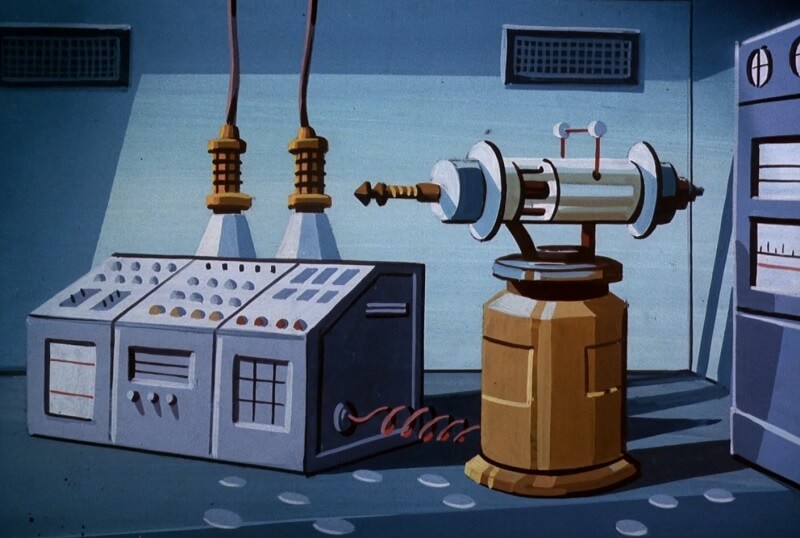 After more monster chase hi-jinks, Scooby and Shaggy meet back up with the rest of the Gang.  Together, all five of them go searching for the Professor, but are surprised once again by the Future Monster.

The Gang dash off into the ship’s rope locker, and conceal themselves in some coils of ropes.  In the adjacent room, which is the Crew Quarters, the Gang hear some moaning.  Investigating, they find the Professor tied up within an entangled hammock. 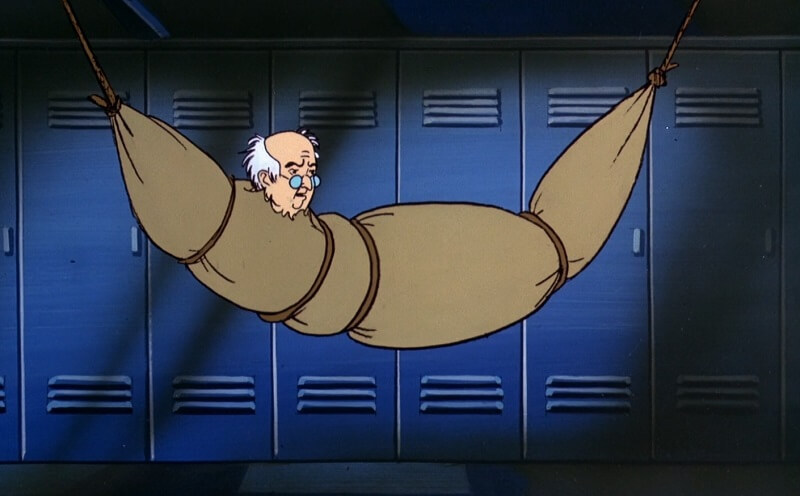 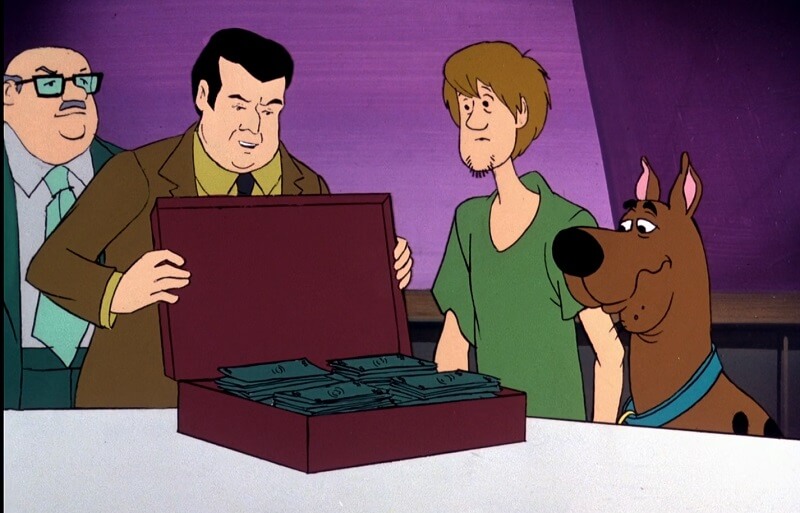 The Professor thanks the investors for their investment and fires up the machine.  The machine begins pulling the Future Monster back to the future where he belongs.  The Professor demands more power and cranks the machine up to eleven. 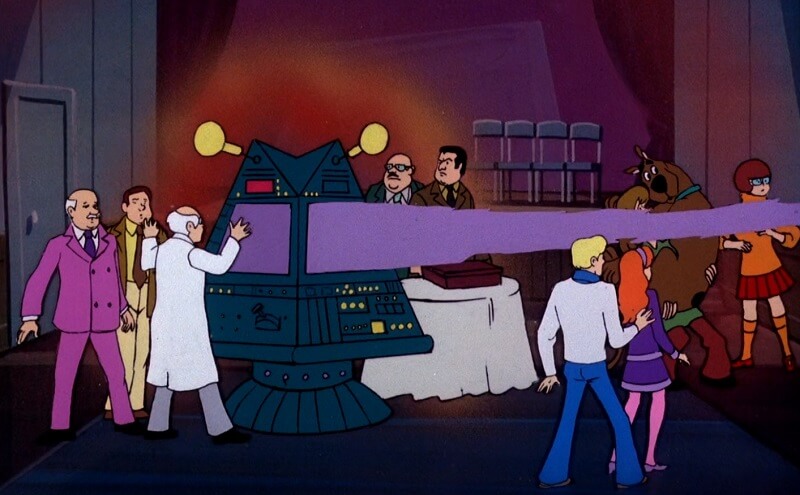 Before being pulled into the machine, the Future Monster yanks the $500,000 with him.  With the Monster gone, Scooby and Shaggy begin to celebrate, however, the investors are not so impressed.  With the money gone, they’re out of a lot of cash.  The Professor claims that the power overload has wrecked his machine beyond repair, and he can not return the Monster.  Plus he has no new money to build a new one.

Velma smells a rat and begins putting the mystery puzzle pieces together in her head.  She whispers something quickly to Freddy, and Freddy tells everyone that he can get the money back.  Velma claims her uncle is an Electronics genius, so she contacts her uncle on the ship’s radio to get instructions on how to fix the Time Machine.

The Professor and Simon Grady claimed they’ve had enough and leave.  Little do they know Freddy is on to them as he follows them to a spot where they hid the cash. 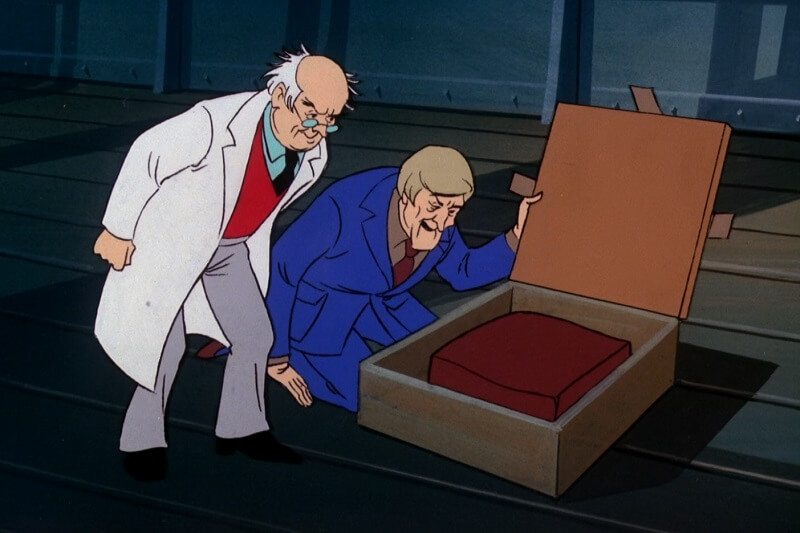 Turns out Shaggy was in the Future Monster suit after Velma claimed to have fixed the time machine.  Shaggy had grabbed an empty case, fooling Simon and The Professor into thinking the Monster was real and had the real money. 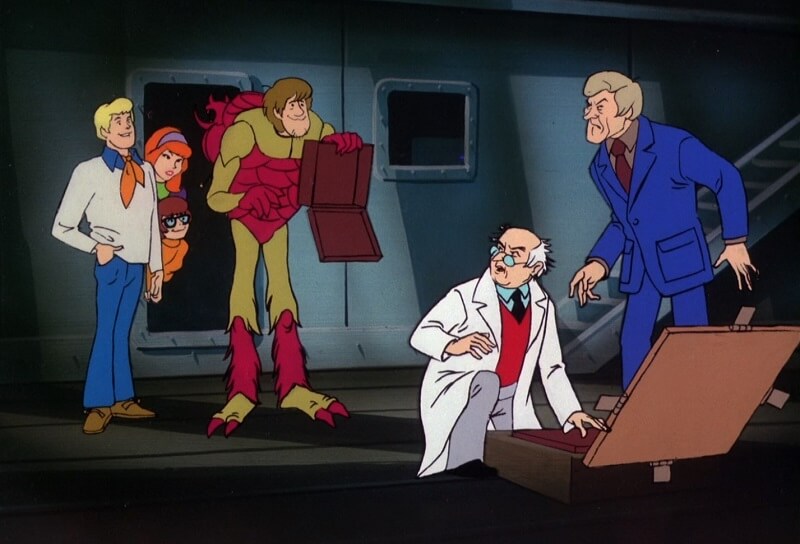 The Professor and Simon make a dash for the lifeboats to escape.  However, Scooby replaces the Janitor Supply Closet sign with a Lifeboat directional sign, trapping the diabolical duo.

Freddy returns the money to the investors, and the boat’s security officers show up to apprehend the Professor and Simon Grady.  Freddy explains the time machine was all a ruse to get funding from the investors by fooling them with a phoney time machine and a fake monster.

The laser they found earlier, along with the strange discs, were all to generate holograms of the Monster.  Using the ship’s closed-circuit tv system, they could project the Monster anywhere in the ship. 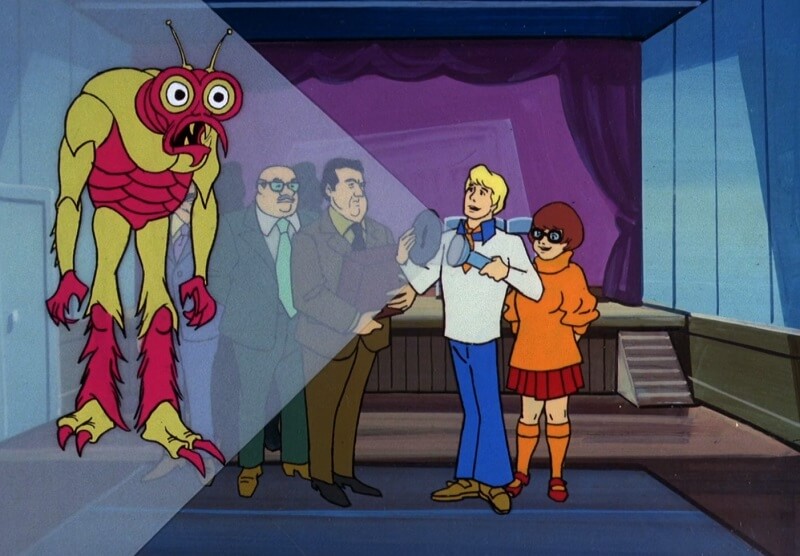 One of the investors inquires about the Monster that grabbed the Professor, and Shaggy explains that it was just Simon Grady wearing the Future Monster Suit.  All he was doing was slipping into the back of the machine, and leaping out on cue when the machine spat out sparks and smoke. 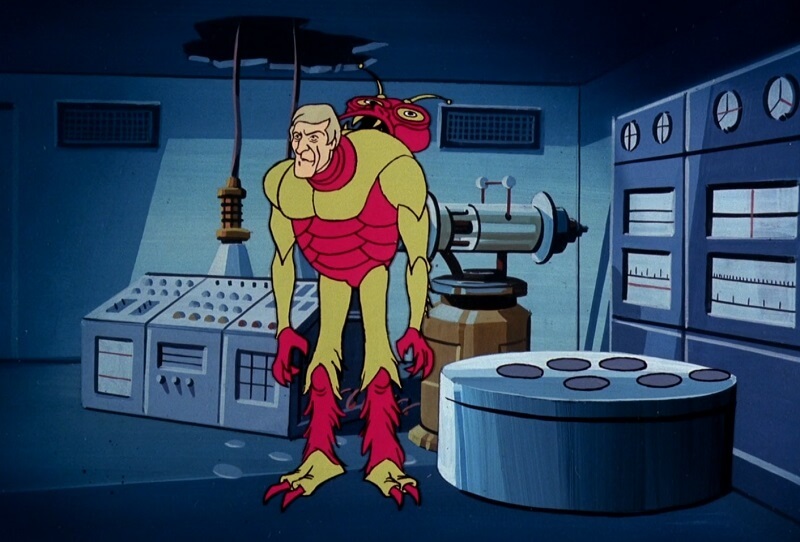 The Professor exclaims “A perfect swindle, ruined by you meddling kids” before he is escorted into the brig.  To celebrate another mystery solved, and kick off their three-week vacation, the Gang sit down to a well-earned buffet, where Shaggy declares ‘All Hands on Food’.

This episode is pretty awesome.  The Future Monster is creepy, and it was cool to see the gang in a new environment.  I also loved the horror/sci-fi overtones! Why this hasn’t been released officially on DVD seems like a true crime to me.  Hopefully, Warner Brothers gets their act together and publishes it.  Like it’s been over 40 years!

I feel like someone will invent a legit time machine before we can have a high definition copy of this fantastic episode on physical media. But I guess if that has happened, I would have went back in time and given myself a copy of this dvd….

How do you feel about this episode?  Let me know in the comments below!