The Ozark Witch Switch is the sixth episode of the second season of the Scooby-Doo Show and originally aired on October 15th, 1977.

This episode sees the gang spending the night in the Hatfields cabin where the Ghost of Witch McCoy appears and is turning everyone into frogs.

The episode begins on a dark and stormy night in the Ozarks. On top of a mountain cliff we see a witch who exclaims she will not rest until the Hatfields are revenged upon. The witch then turns into a black cat. 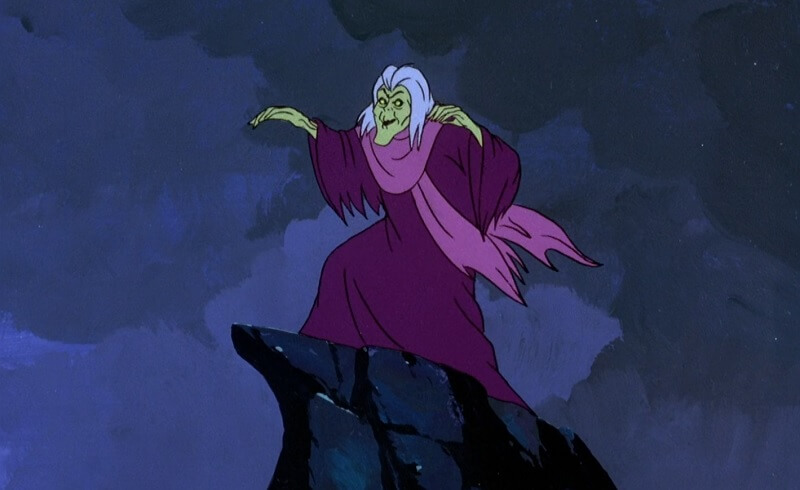 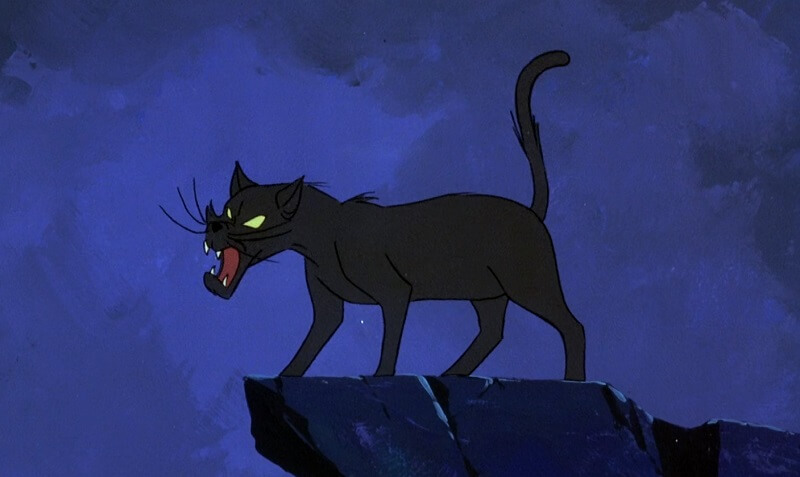 Abandoned on the road, the gang spot an old cabin with the lights on. Knocking on the door, the owner relentlessly invites the gang in at their own risk.

Inside we meet the last of the Hatfields who moved in to the old McCoy cabin a year ago. Last month the ghost of Witch McCoy showed up and threatened to turn the Hatfields into frogs and lizards. 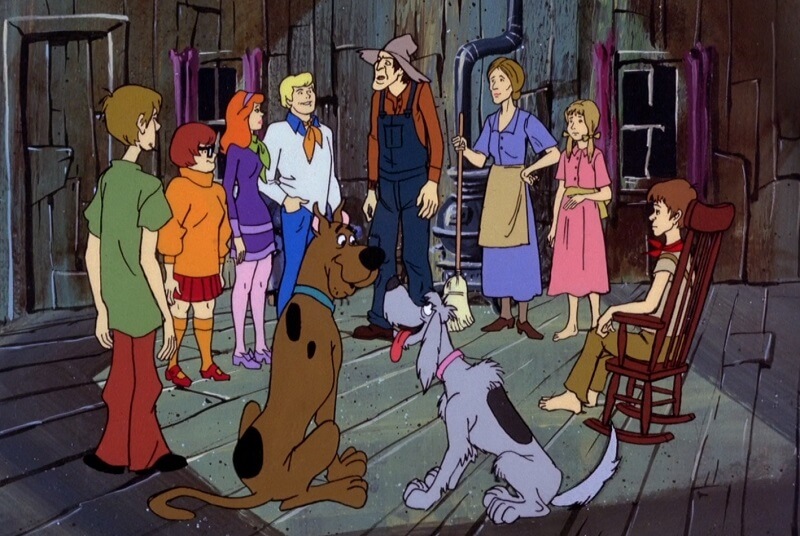 Witch McCoy was a woman who was hung 100 years ago for witchcraft. She’s after the Hatfields due to a feud between the two families.

In the middle of the night while the gang are sleeping, Witch McCoy makes her entrance. Scooby is the first to be scared as the witch crawls into bed with Shaggy and Scooby. The rest of the gang wake up as the witch gives the gang a warning and disappears.

In another room we hear Ma Hatfield scream where we discover that Pa Hatfield has been turned into a frog.

Scooby and Shaggy go into the town of Spooky Hollow to find a phone and call the sheriff, while Freddy and the girls decide to explore the woods for clues.

Knocking on the Door of Spooky Hollow General Store, Scooby and Shaggy spot a phone, so they break in to use the telephone. Just after they get in, the owner, Aggie Wilkins, shows up and scolds Scooby and Shaggy for breaking in.

After explaining their story, Shaggy calls the sheriff, but the phone is dead as the line has been cut. The store owner then tells them to stay away from the Witch’s cave in Spider Mountain. Scooby and Shaggy then run away after Witch McCoy in cat form shows up to frighten them. 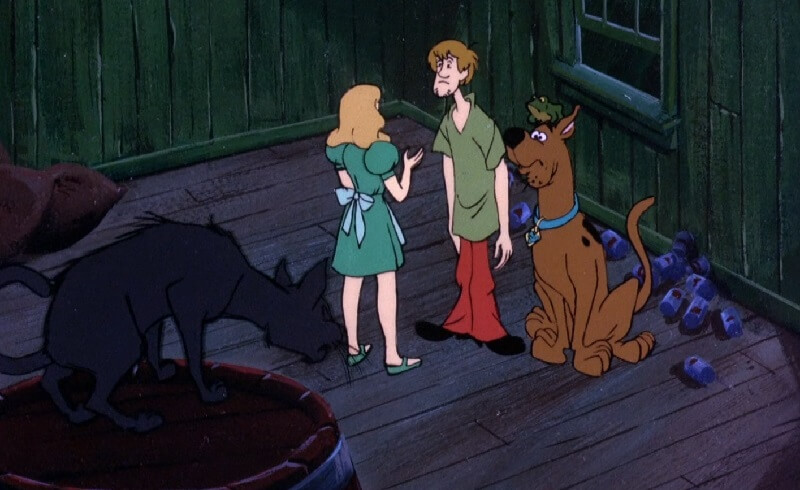 In the woods, Freddy, Daphne and Velma spot a zombie-like figure digging a hole. After slipping, Daphne scares the man off. 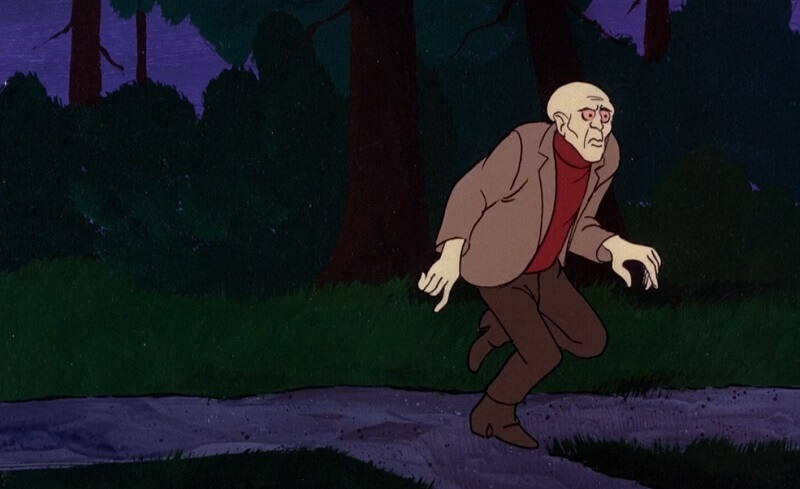 Back at the cabin, Scooby and Shaggy explain their ordeal, warning the rest of the gang that they need to avoid Spider Mountain. Obviously, however, Fred has other ideas, so they head up toward that spot.

On the way up, Velma spots strange marks gouged into the trail, and Daphne pulls out her camera to snap a picture.

Spotting an old sawmill, Freddy realizes they are close, but when they come to a fork in the road, the gang have to split off. Velma, Shaggy and Scooby are the first to arrive at the cave, but they have to cross a deadly chasm across a log to get across.

While on the log, the Zombie pushes it so they fall into the chasm. Fortunately blind luck saves them and they land near the cliff.

Inside the cliff we spot the witch’s lair which includes a cauldron, as well as a library of spooky spells. One of the spells references nails and boards, which Velma thinks is a clue regarding the old cabin. Finally, they hear the witch who cackles loudly as she searches for intruders. 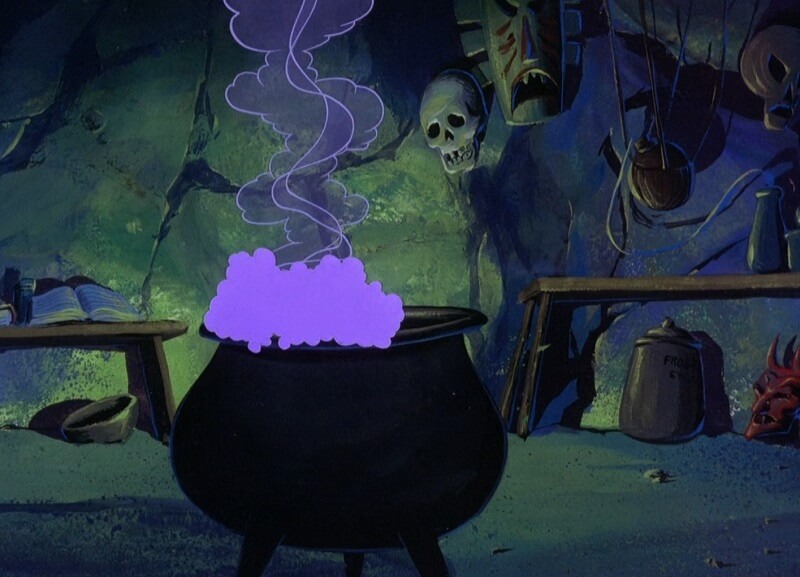 Velma has a plan, and dresses up Scooby as a witch. The scene is quite humorous, but ultimately fails and our brave trio runs off only to get caught in a net. 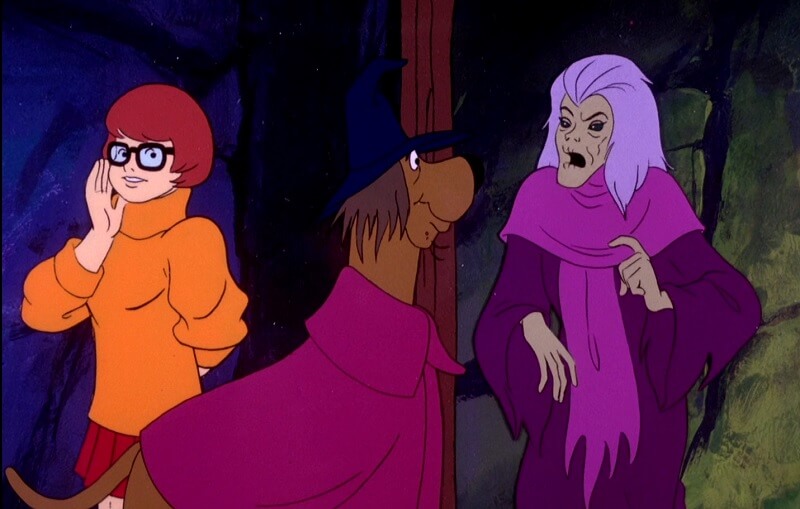 The gang all then head back to the cabin, where all the Hatfields, including the dog, have been turned into frogs. Freddy also finds a mound of sawdust.

Inside the Mystery Machine’s photo lab, Daphne develops the image she took before and Velma figures out it’s Morse code. The letters read SM

Velma had also snagged a spell book from the cave which reads 15 nails from east to west where they are to follow the middle nail to a board with a knot. Knocking twice, Scooby finds a string which they pull and a board opens up.

Between all the clues, Freddy and Velma have everything figured out, so they set up a trap where they hide a fake clue.

Both the zombie and the witch head to a spot to dig and begin to argue. Meanwhile, Shaggy, Scooby and Velma wearing white powder, show up and frighten the witch with threats of spells. Daphne and Velma also appear to add to the spookiness. 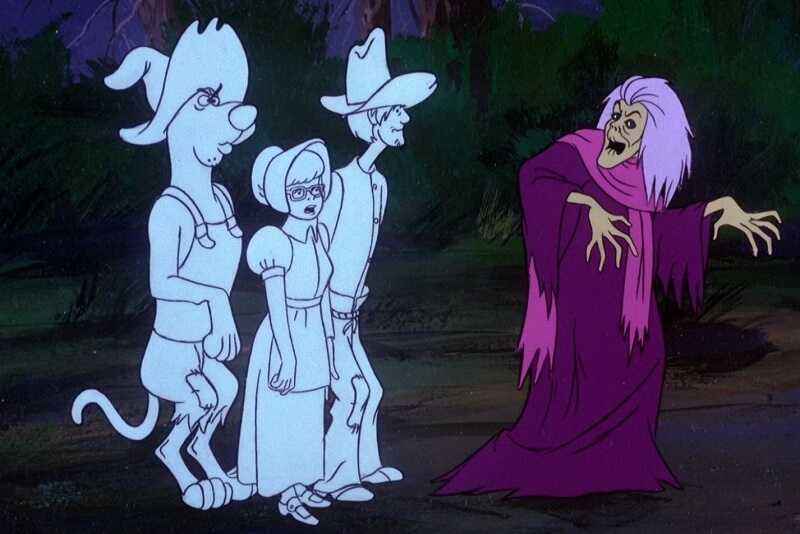 The trap gets even more elaborate, frightening off the zombie who Scooby traps himself.

The zombie turns out to be Zeke Harkens who recently broke out of prison after stealing half a million dollars. Meanwhile the witch turns out to be Aggie Wilkens, Zeke’s old girlfriend.

Zeke had hidden the money with the coordinates hidden in the Hatfield wall. Both Zeke and Aggie wanted the money for themselves, so they were working against one another to find it before the other did. Meanwhile Aggie needed to find where those coordinates were, so she had to scare off the Hatfields. 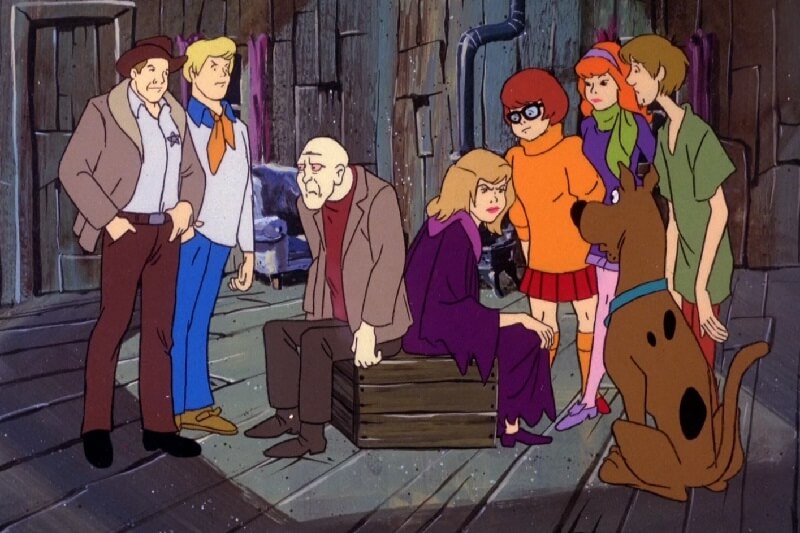 Now it’s just a matter of finding the Hatfields, and the gang explain that they are in the sawmill. The marks they found had said SM which hinted at this, plus the mound of sawdust in the cabin was a dead give away.

With another mystery solved, the gang sit down to an Ozark feast before heading off on their next adventure.

There is lots to love about this episode and it’s so fast paced and action packed. Not a second is ever wasted as the story unfolds.

First off, the setting is perfect with how the mountains makes for a spooky backdrop.

The witch is super creepy as well, with such an evil cackle, and her ability to shapeshift into a hostile and bitter black cat. Meanwhile, the Zombie is just a regular man who looks rather creepy at night. While he looks rather plain, I feel that made him much more scarier and threatening as he did not look as cartoonish as the Zombie we got in Mamba Wamba or Which Witch is Witch.

While we didn’t get to spend much time with Freddy or Daphne in this episode, I feel the time spent on Velma hanging out with Scooby and Shaggy well made up for that lost time.

Anyway, I only have one more episode to review, and that’s the Creepy Heap from the Deep. After this, I’ll be done the original run without Scrappy.