Chiller Diller Movie Thriller is the fourth episode of Season 2 of The Scooby-Doo Show, and it first aired on October 8, 1977

Chiller Diller Movie Thriller is notable for having Scooby-Dum and Scooby-Dee as part of the cast.  This is also the last episode to feature Scooby-Dum (aside from Laff-A-Lympics episodes) and the first and last episode to have Scooby-Dee (unless you count the possible cameo in the What’s New Scooby-Doo? episode titled Homeward Hound.

Scooby-Dee is Scooby-Dum and Scooby-Doo\’s cousin.  Both are enamoured with her and will do anything to rescue her from trouble or to receive a kiss.

Lights, Camera, Action, let’s get on with this review!

The Phantom of Dixie

The episode opens up with a bit of mood by showing an old mansion estate during a lightning storm.  We cut to the inside of the Mansion, and we see the Phantom of Dixie confronting a knitting dog sitting on the couch named Miss Jane. 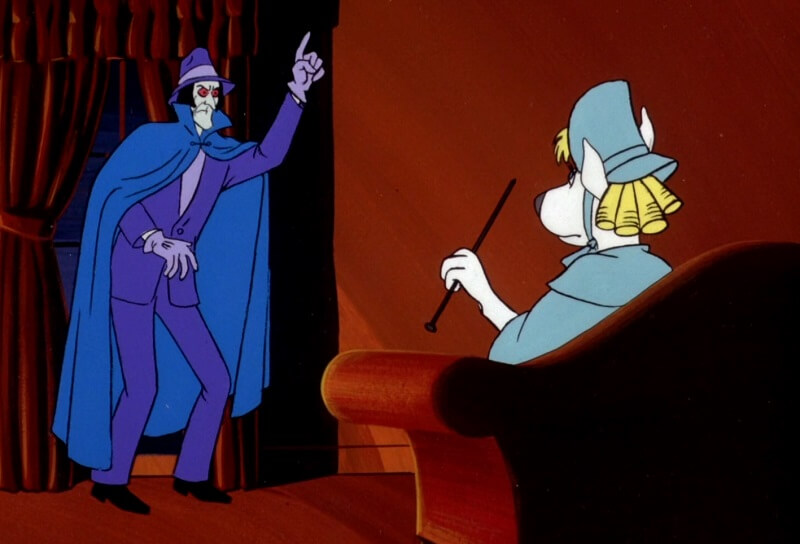 This is all just movie magic in the work, as Scooby-Doo and the Gang, plus Scooby Dum are all on set watching Scooby Dee film her next blockbuster movie called ‘The Phantom of Dixie’.  The movie itself is a remake of an old silent film that was a hit decades ago. 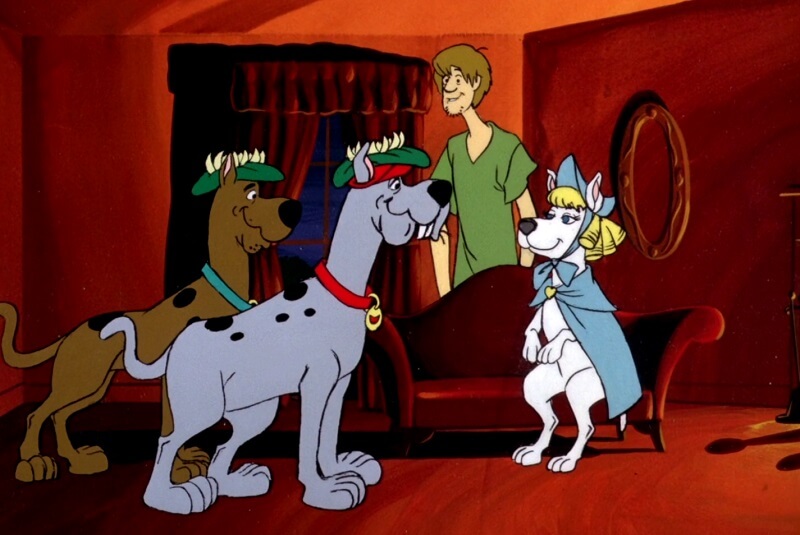 As filming ends for the day, Freddy explains the original silent film made a huge superstar out of Milo Booth who played the original Phantom.  Scooby-Dee excuses herself to take her makeup off, and we see a shadowy phantom approach her dressing room.

The Phantom sneaks a creepy letter into Scooby-Dee’s mirror, which Scooby-Dee soon finds. 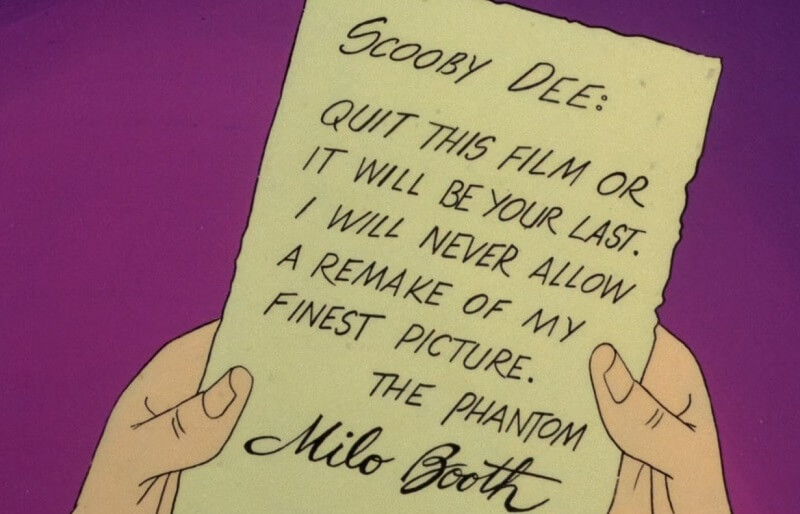 Back on set, Freddy reads the letter to everyone, including the Movie’s producer, Mr. Mogul.  As the letter is signed by Milo Booth, Mr. Mogul explains to the Gang that this is impossible, as Milo Booth died twenty years earlier.  As Milo has been dead for 20 years, Shaggy figures out pretty quickly that they are dealing with a ghost!

Mr. Mogul places Scooby-Dee under a 24-hour watch under the watchful eye of Jim Moss, the studio chief of security, and Rod Kennedy, a dog trainer, or as Mr. Mogul explains, Scooby-Dee’s Dramatic coach..=

Before the train trip even starts, Shaggy is already spooked as he sees a coffin being loaded in a separate rail car.  Shaggy speculates it’s the Phantom’s coffin, to which Daphne thinks he’s ridiculous.  Freddy and Scooby-Dee put his mind at ease by explaining it must be a movie prop.

Later on, as the train gets rolling, we see the Phantom of Dixie emerge from the coffin, and let out a sinister laugh! After hundreds of haunted mysteries, Shaggy knows when trouble is just around the bend! 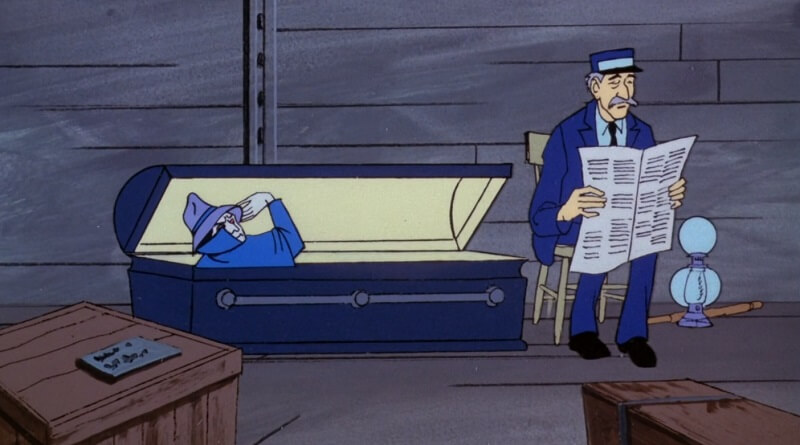 As Scooby-Dee, Fred, Daphne and Velma sit down for dinner, the Phantom can be seen crawling across the train’s roof.  In the kitchen compartment below the Phantom, Shaggy, Scooby-Doo and Scooby-Dum can be found making a sandwich.

The Phantom climbs down the side of the train and peers in the window upon Shaggy adding mozzarella, whipped cream, ice cream and peanut butter to his sandwich.  Shaggy spots the Phantom and he, along with Scooby-Doo and Scooby-Dum run out of the kitchen and into the dining car.  There Scooby explains to Freddy, that they saw the Phantom. 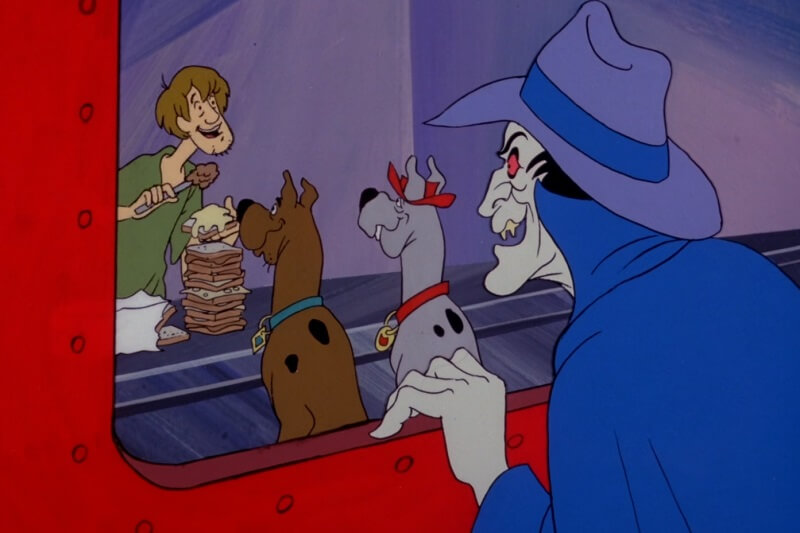 Jim Moss struts in and tells the Gang he saw the Phantom as well so the Freddy and Daphne escort Scooby-Dee back to her private car.  Jim Moss tells the Gang he’ll check the other cars, and instructs Scooby-Doo, Velma, Shaggy and Scooby-Dum to check the baggage cars.

Shaggy’s not too impressed with checking out the Baggage Car as that’s where they loaded the coffin.  Inside the coffin they hear a groan, so they crack it open to find the Train\’s conductor. The conductor explains that he saw the Phantom, and must have passed out and was placed in the coffin.

Looking for clues, Velma finds some mud on the ground and in the coffin.  Velma decides they should all head back to Scooby-Dee’s car to tell Freddy.

While Freddy and Daphne guard Scooby-Dee, the Phantom barges in to terrify them. His entrance is ruined when Shaggy opens the door and bumps the Phantom in the rear end. Turning the lights off, the Phantom disappears.

Velma explains to Jim Moss and Rod Kennedy what just went down.  Freddy decides they should dress Scooby up as Scooby-Dee and fool the Phantom into kidnapping the wrong dog.  Jim Moss adds to the plan that they’ll hide Scooby-Dee in a sleeping bunk separate car, and they’ll have Shaggy guard her.

Shaggy falls asleep guarding Scooby-Dee, and she slips out to get a drink of water.  Freddy, Scooby-Dum and Scooby-Doo (dressed up) discover Shaggy napping and see that Scooby-Dee is missing.  All three of them go looking for her.

Searching in various bunks, Scooby-Dum and Scooby-Doo wake up several no so impressed guests.  The disruptions are so epic that Scooby-Doo ends up losing his costume.

During Scooby-Dee’s trek for water, she is nabbed by the Phantom, and an impostor is substituted for her spot. 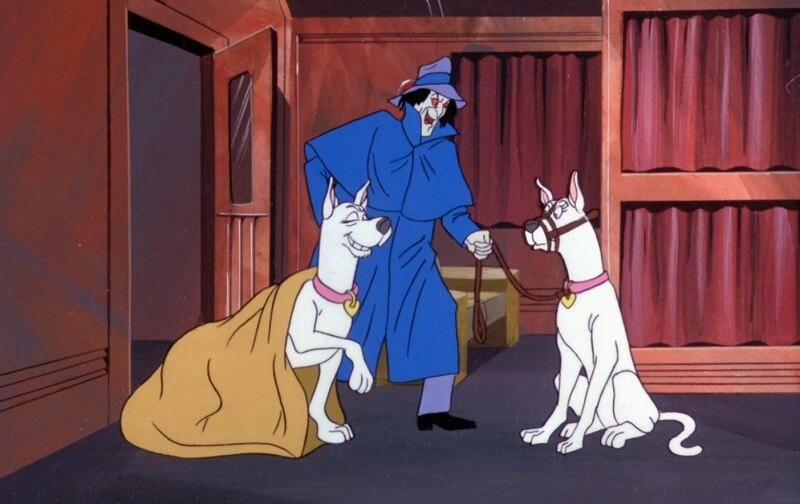 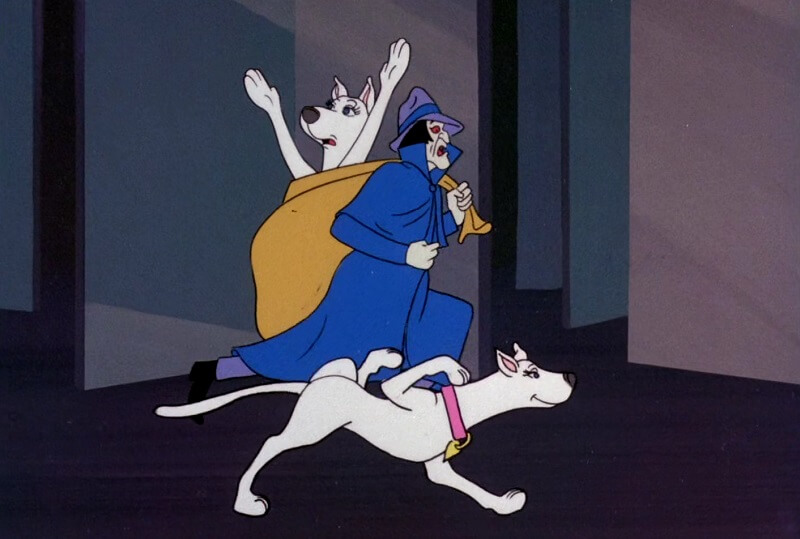 The impostor fools Freddy and the Gang, so they return to Scooby-Dee’s car.  The Phantom the disconnects Scooby Dee’s car from the train.  The car then comes to a complete stop in ‘Boothville’ which is a town named after Milo Booth.

The Gang realize they’ve been uncoupled from the main train when they see the Phantom walking around outside the train with a bag thrown over his shoulder.  Dashing away, the Phantom runs towards the town cemetery.  The Gang still don’t know they have the wrong Scooby-Dee, but they decide to run after the Phantom anyway. 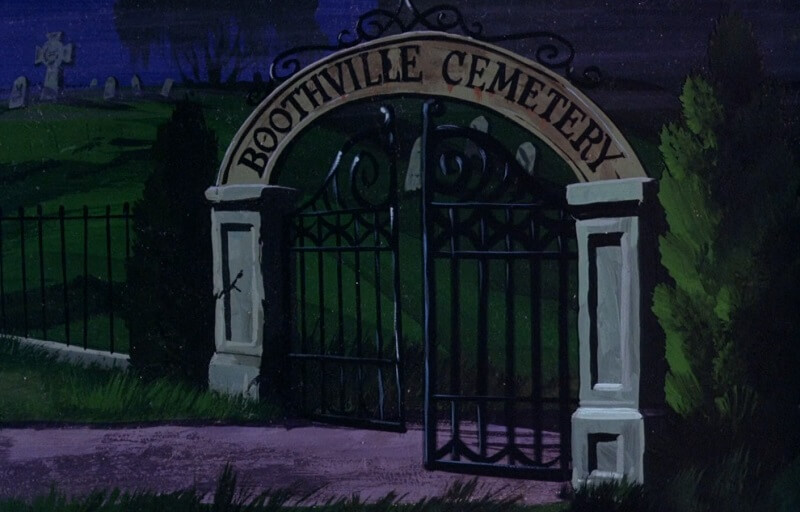 Splitting up, Shaggy and the dogs go one way, and Freddy and rest go another way to look for clues.  At the Booth Family Mausoleum, Freddy finds the door wide open and ready to enter.  Heading in they find more fresh mud on the ground.  They then open up Milo Booth\’s coffin in the crypt only to find out that it is empty. 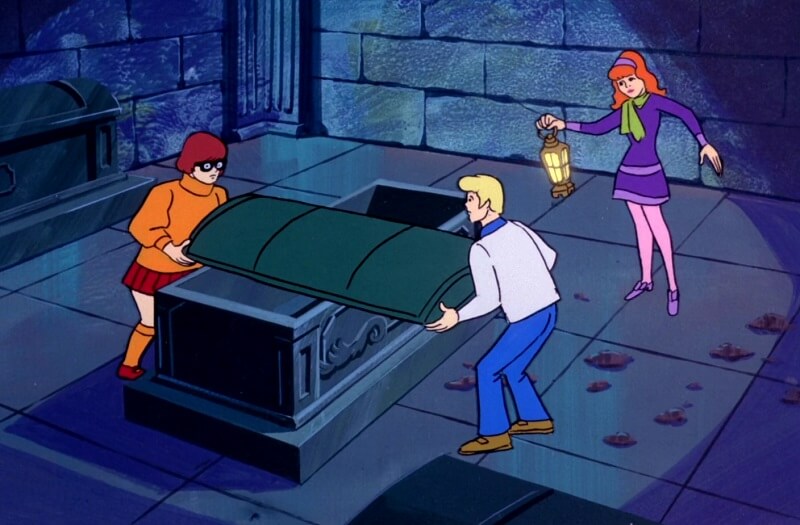 Meanwhile, back in the cemetery, Shaggy and the dogs are terrorized by the Phantom.  It’s at this point they realize the other dog is an impostor as she does not kiss like Scooby-Dee.  The fake Scooby-Dee runs off, and the Gang are all reunited in the crypt where they plot their next move.  Before Freddy can lay out a trap to catch the Phantom, the Phantom locks them in the Crypt.  However, Scooby-Dum’s clumsiness helps them escape the crypt in record time.

Leaving the cemetery the gang head for town.  Shaggy spots a sign for the fair which features a Milo Booth museum so the gang head there. 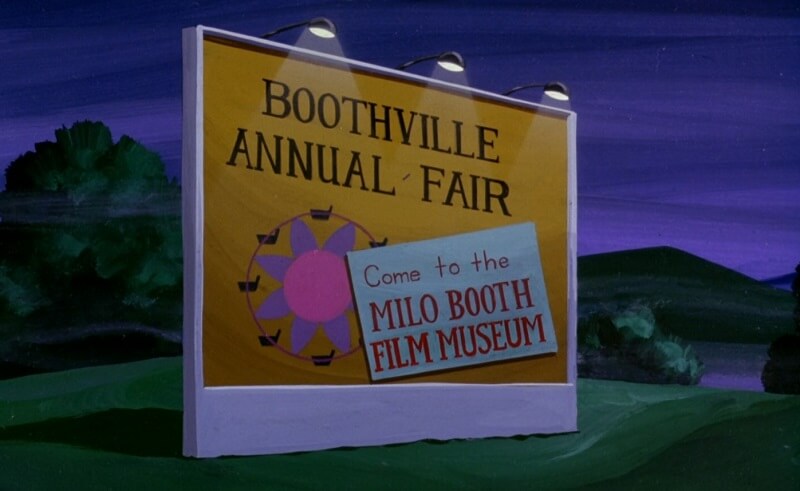 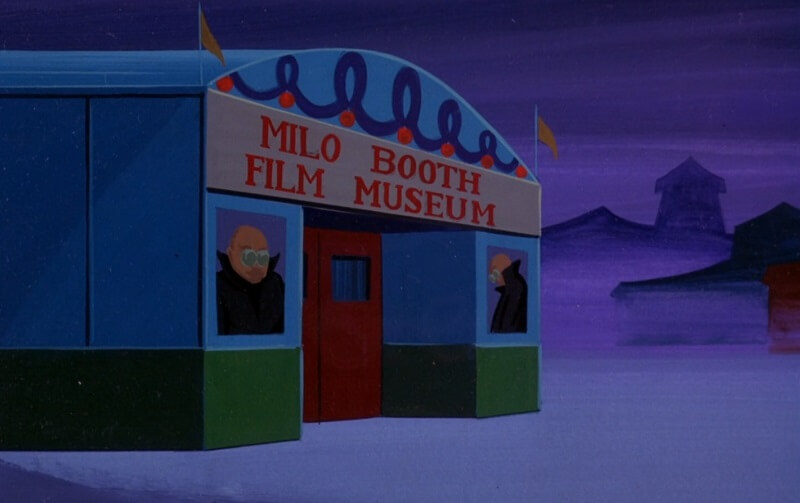 The gang head into the museum where they find a film projector with a film playing.  The film is an old newsreel of Milo Booth waving to his adoring fans.  The Gang realize that the real Milo wore glasses, so the Phantom Milo had to be fake.  They also spot fresh human and dog footprints, so they realize the Phantom is nearby.

Running out of the museum and into the fair’s fun-house, they find the Phantom and a chase takes place.  After conquering several obstacles such as spinning tunnels, merry go rounds and log rides, the Gang finally capture the Phantom in a Ferris Wheel cart. 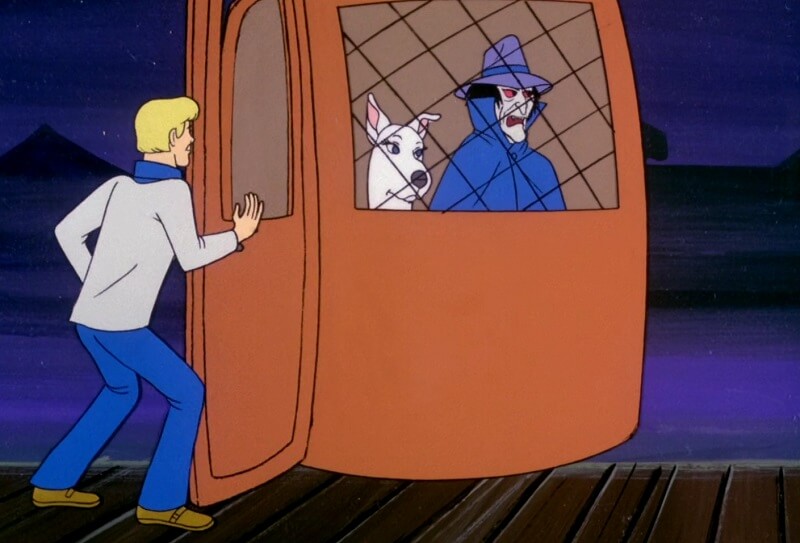 Under police supervision, Freddy removes the mask, and it’s revealed that chief of security, Jim Moss, is the guilty bad guy.

At the Boothville Police Station, Freddy explains that Jim Moss planed on making his own movies using the fake Scooby-Dee as she would only be able to obey him.  The Phantom identity was only a ruse to convince Rod Kennedy, the dog trainer, that Scooby-Dee was so frightened by the Phantom, that from now on she’d only obey Jim Moss.

Finally, to make the world think that Milo had been resurrected, he switched the nameplate of Milo’s coffin to an empty one.

With the mystery solved, the gang head back to Hollywood to celebrate Scooby-Dee’s movie award for best outstanding actress in a canine roll. 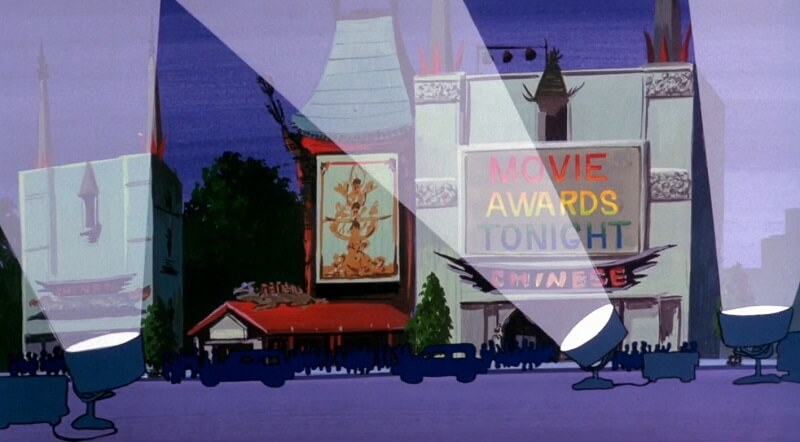 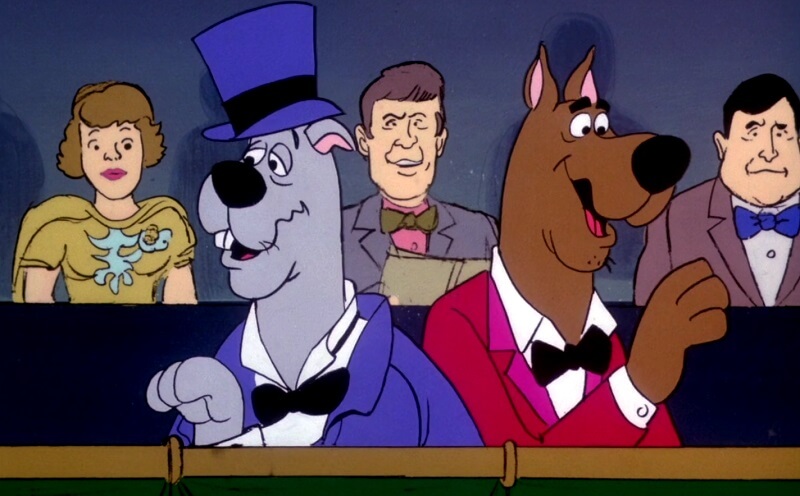 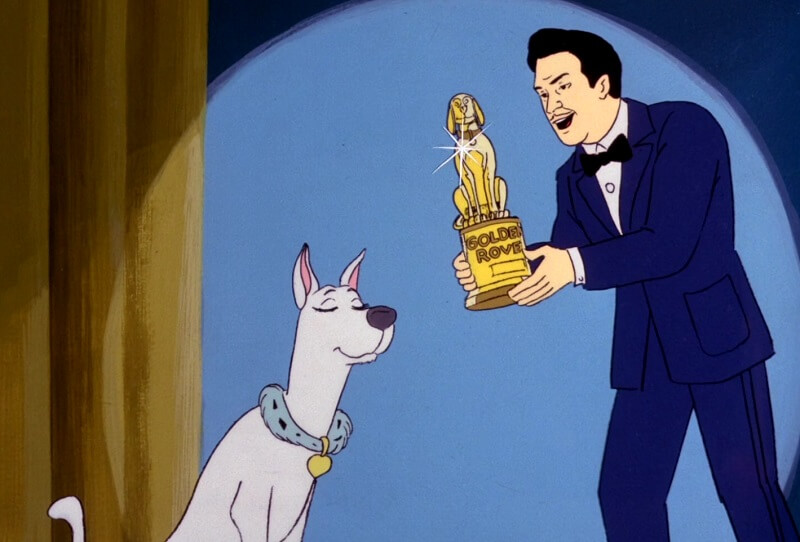 I give this episode a10/10.  There’s a lot I like about the episode, particularly the creepy cemetery setting, the fun house and the train.  The look of the Phantom was rather cool too, and I adored the Milo Booth backstory.

The Phantom looked pretty cool, but I wish he were given more to do.  It was awesome watching him crawl on the train roof and terrify Scooby and the Gang, as well as terrify Shaggy in the cemetery.

This is an episode worth checking out as it’s epic in its storytelling. We jump from a film set to a train, to a cemetery, and then we end up at a funhouse, concluding with an awards ceremony. All in just 20 minutes!

It’s very cool that Janet Waldo voiced Scooby-Dee with a sweet and honeyed Southern Belle twang.  Janet Waldo, for those in the dark, voiced Judy Jetson, as well as Josie from the Josie & the Pussycats animated series (as well as a few witches from classic Scooby-Doo episodes). 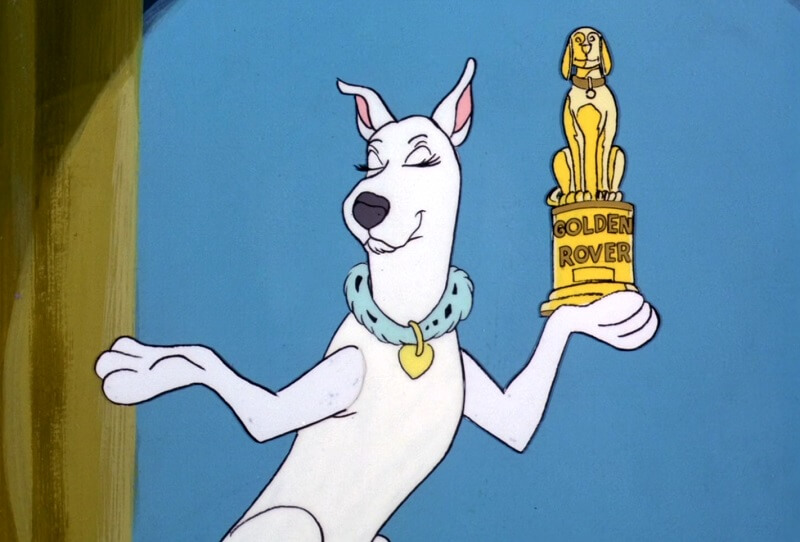