The Spooky Case of the Grand Prix Race aired initially on October 8, 1977, as part of the Scooby\’s All-Star Laff-a-Lympics.  Later on, it was repacked as episode #5 for Season 2 of the Scooby-Doo Show.

This episode sees the gang visiting a Grand Prix race only to run into a phantom racer who makes other drivers and their cars vanish!

If you’d like to own this episode on DVD, well you can’t!  Four episodes from Season 2 of the Scooby-Doo Show have never been made available which seems crazy to me!  The other three episodes are The Curse of the Viking Lake, The Creepy Heap from the Deep, and Creepy Cruise.  Warner Brothers, get on this already!!!

At the Grand Prix Time Trials

The episode opens at the Grand Prix Time Trials as Carl Conover speeds by in his race car.  He, unfortunately, doesn’t get far as the Phantom Racer appears and makes Carl, and his vehicle disappears into a mysterious fog. 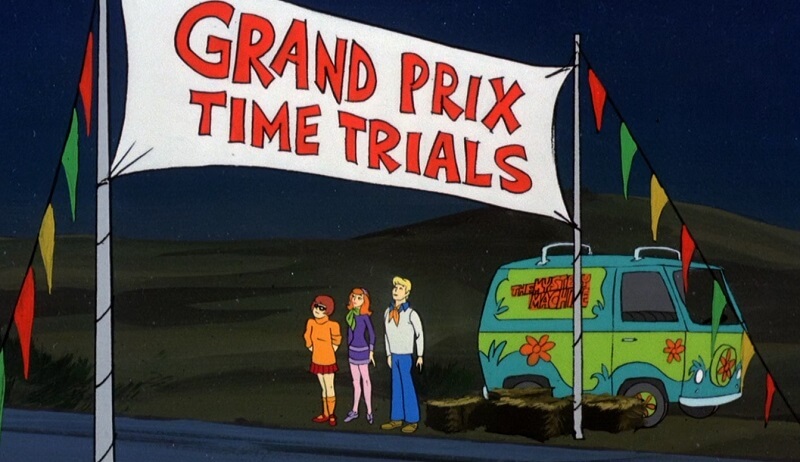 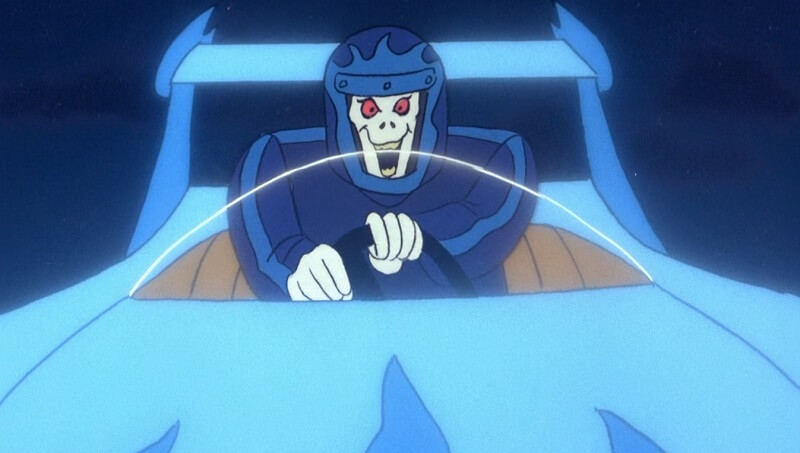 At the Ice Cream Shoppe, Freddy and the gang read all about the Phantom Racer in a newspaper, and they decide to investigate.  This is one of the rare occasions where the gang do not stumble upon a mystery by accident. 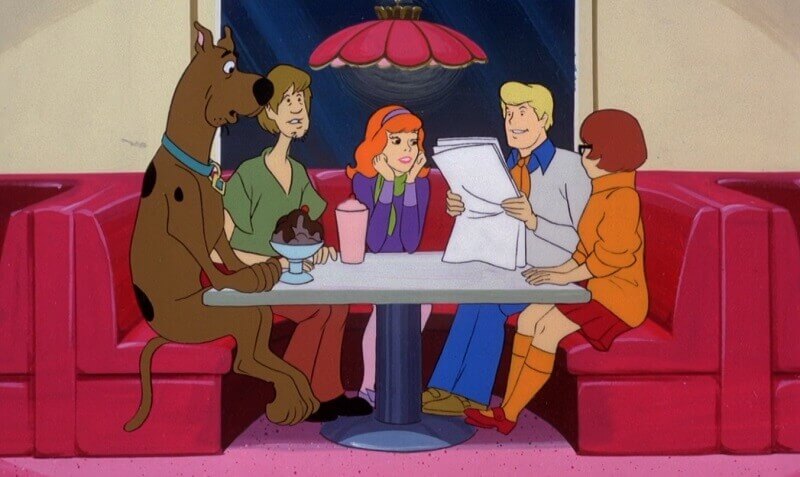 Heading to the race tracks, they talk to Mr. Osborne, the sponsor of the racing event.  Mr. Osborne explains that the Phantom Racer is the ghost of a racer who accidentally drove off a cliff several years back.  The ghost is now seeking revenge on all race car drivers.  Mr. Osborne also explains that cancelling the race would financially ruin him. However, the gang assures him that they will solve this mystery so the race can go on. 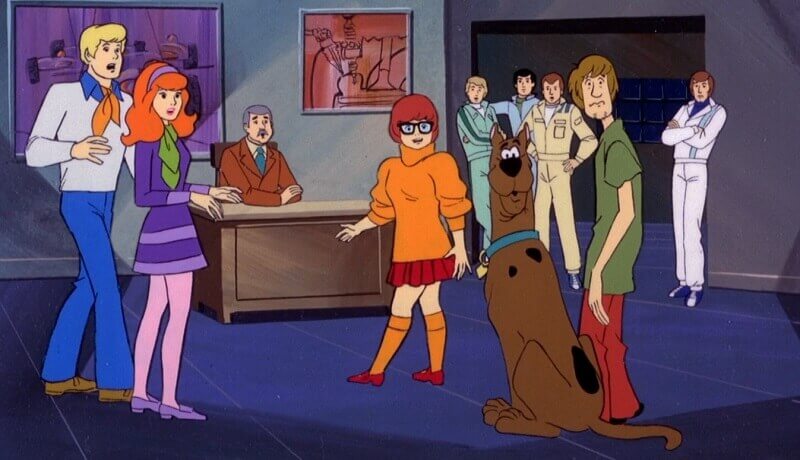 Just as they finish their promise, a dishevelled man stumbles in with terror, and Mr. Osborne recognizes him as Carl Conover, the driver we saw vanish at the start of the episode.  Carl somehow got away from the Phantom, but he doesn’t recall how.  This sets the gang off in search of clues where they find wide tire tracks which they suspect are from the Phantom racecar.

Following the tracks, they end up at an old junkyard where they discover a jet which is missing its engine.  This is strange as the junkyard is more suited towards cars rather than airplanes.

Entering an old house, they meet the junkyard caretaker who informs the gang that the Phantom has been haunting an antique car museum nearby, so the gang head there. 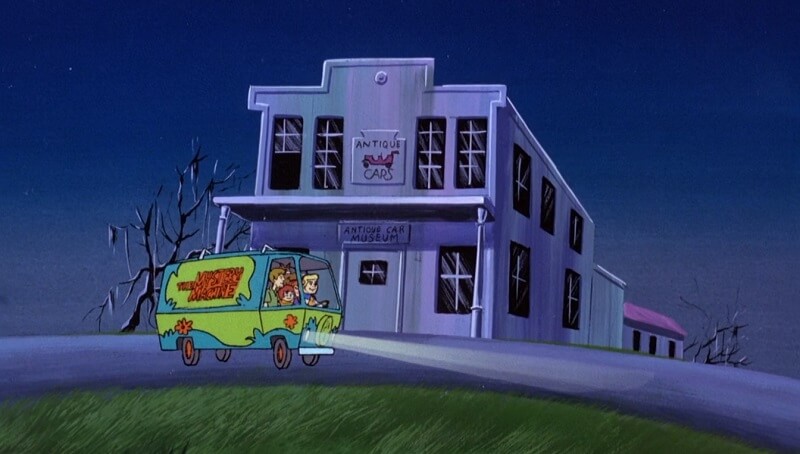 Arriving at the car museum, they find it closed, so the gang sneak in.  Once inside, they split up to find the Phantom.  Obviously, it doesn’t take long for Scooby and Shaggy to run into the Phantom Racer.  Escaping his chase, they reunite with the gang where the Phantom makes another appearance.  He warns the gang that whoever enters the Grand Prix race will not escape his vengeance!  The Phantom Racer then zips off in his racecar.

Rushing back to the tracks to warn the racers, the gang are too late, as racer Ken Rogers becomes the Phantom’s next victim.  Freddy then decides that the only way to trap the Phantom is to get the Phantom to chase them.  Scooby and Shaggy are then voluntold that they will pretend to be race car drivers in order to lure the Phantom Racer.

The plan works, and the Phantom Racer chases Shaggy and Scooby.  The Phantom also kidnaps Shaggy, however, Scooby is able to tell the gang that the Phantom took Shaggy to the junkyard. 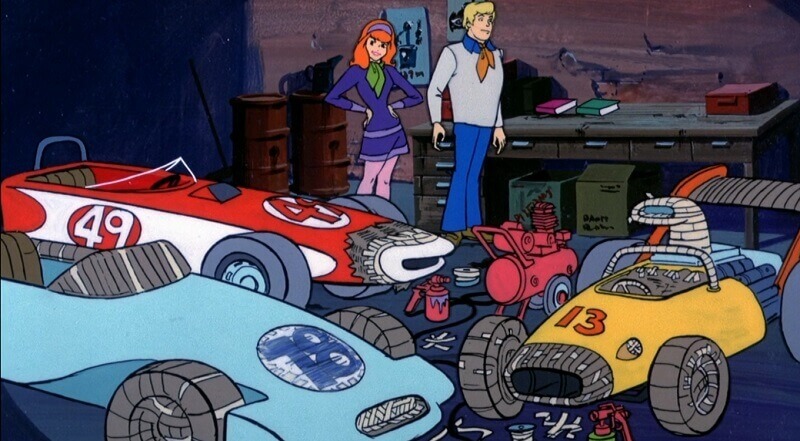 At the junkyard, they split up to look for Shaggy.  Fred and Daphne search the old house, where the old man living in it is nowhere to be found.  Daphne’s clumsy luck, however, finds a hidden cavern underneath the house and junkyard.  The entire gang head into the caverns and once again split up.  Here, Daphne and Freddy find the missing race cars which have been repainted.  They also find a book about magical illusions and a tome on How to Hypnotize. 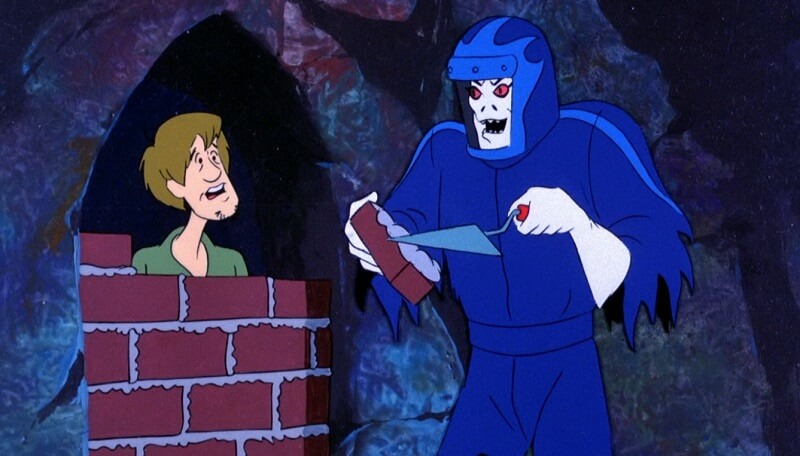 Velma and Scooby, on the other hand, find the Phantom Racer who is bricking Shaggy up behind a brick wall.  There they manage to free Shaggy, and the entire gang reunites.  The reunion is cut short as the Phantom Racer begins chasing them again in his race car.  The gang hop in the two missing race cars and through a series of lucky escapades, they capture the Phantom Racer. 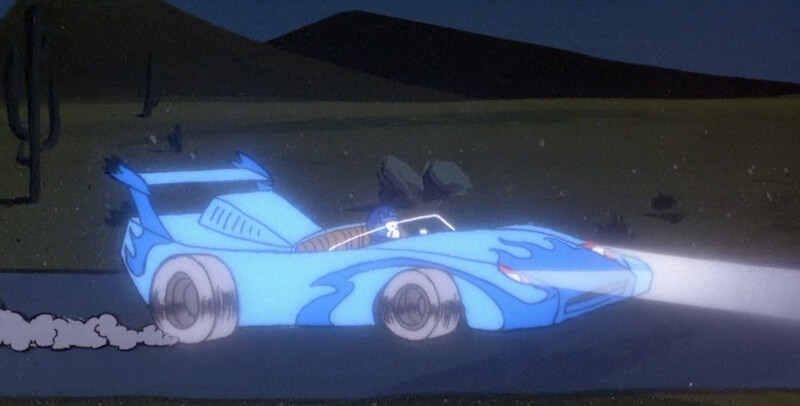 The Phantom is revealed to be Ken Rogers who faked his own disappearance.  His plan was to steal all the expensive racecars, repaint them, and then sell them overseas.  The biggest clue was the airplane in the junkyard.  Ken had taken the jet engine out of the airplane and put it in his racecar so he could be the fastest.  He also rigged his suped-up racecar like a lumber car with magnets to trap the other cars beneath it.  From there he drove it to a Batcave like entrance to the cavern under his junkyard. 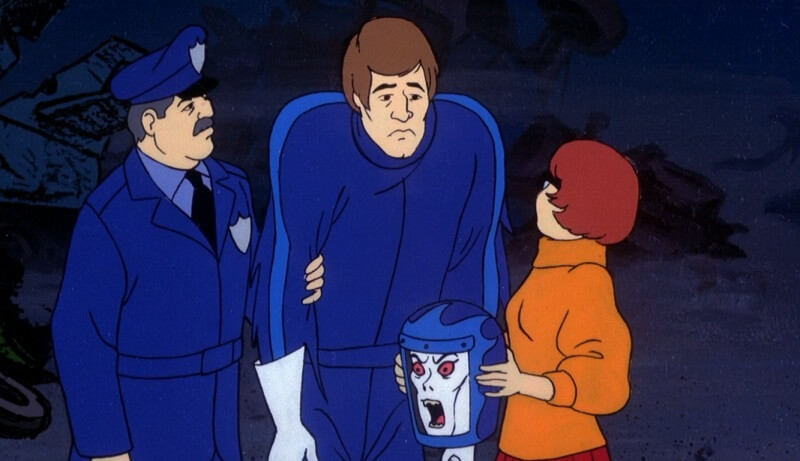 Finally, he hypnotized the other drivers to space out and forget what had even happened.  For his own kidnapping, Ken Rogers used a projector.  Even the creepy junkyard watchman was all part of the ruse, as it was just Ken in disguise to throw the snooping gang off track.

With the Phantom caught and arrested, the Grand Prix race goes off without a hitch the next day.

This is my first time ever watching this episode, although I did hear it over the radio when I was 10.  When this originally aired, I was only 1 years old and I don\’t recall this ever being aired in re-runs.  Since we got TV by antenna, we were limited as to what stations we could get, but I figured out using my Radio, I could listen to Scooby-Doo episodes from areas far away, and I remember listening to this episode.

It’s cool to finally see the Phantom Racer in his full glory, and this is an awesome looking villain.  I love his Zombie-like head that seems swollen up inside a racecar helmet.  I also dig his torn pants and creepy laugh.

It’s fun to see the gang actively investigating a mystery, rather than have one fall in their lap.  It’s also neat to see the events of this mystery taking place during a sport, where there are hundreds of spectators all watching the racecars disappear and witnessing this creepy phantom.  The cavern under the junkyard is also a lot of fun!

It’s a cartoon crime that this isn’t on Blu-ray or DVD yet!  While you can stream it through the Boomerang app, as a collector, I want to own this masterpiece of mystery!